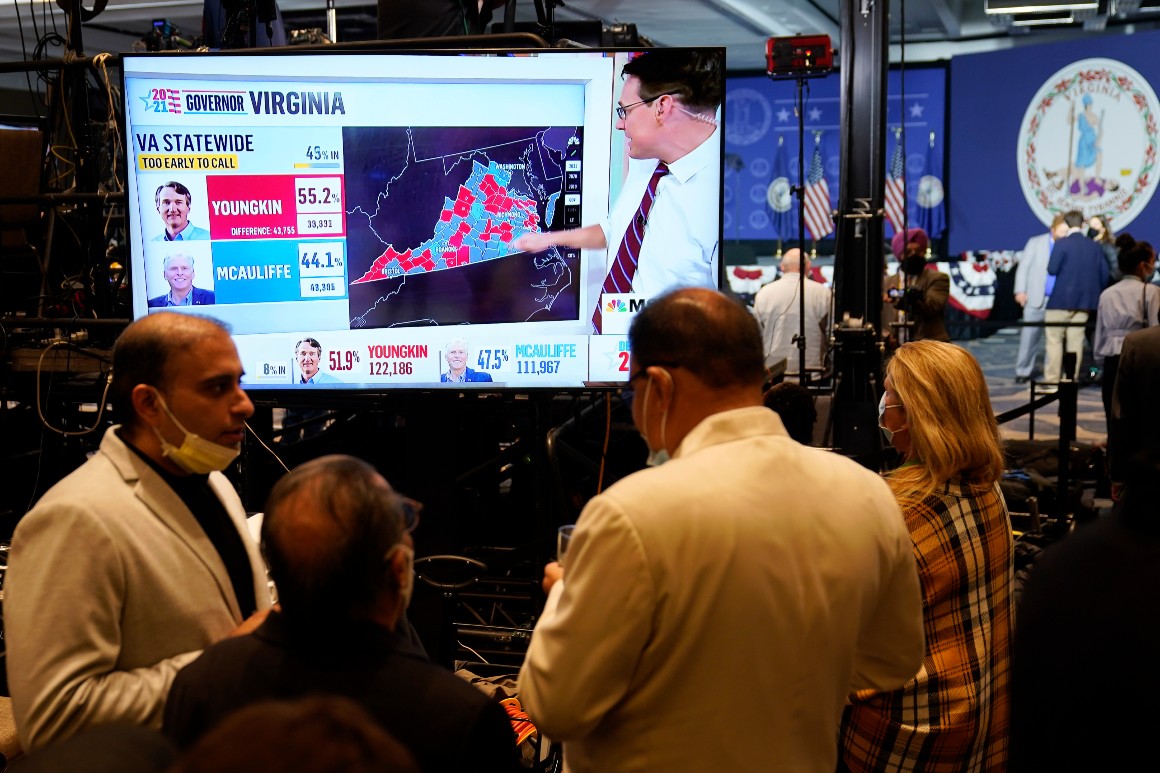 The focus groups with Virginia voters are already underway, as Democrats try to make sense of a dismal off-year election that set off panic alarms across the party.

The center-left group Third Way is among those conducting the sessions, which are suddenly so abundant that the local company they use to recruit participants and facilitate interviews was booked solid from right after the election.

But whatever they discover during their post-election reckoning, there’s little evidence any of the findings will stick — or that the party will prove capable of changing course ahead of the midterms next year.

In the days following Terry McAuliffe’s defeat in Virginia and Gov. Phil Murphy’s scare in New Jersey, progressive Democrats cast blame on moderates, and vice versa. Vice President Kamala Harris touted the party’s “great wins” outside Virginia, though it’s difficult to find many. President Joe Biden, despite his sagging public approval ratings, refrained from taking responsibility, though he said “we have to just produce results” for voters. When they did produce legislation, passing an infrastructure bill on Friday night, it was only after what Rep. Mark Pocan (D-Wis.) called a “clusterfuck.”

“I would love to be able to tell you that I think we are going to do something different,” said Doug Rubin, a Democratic strategist who was a chief of staff to former Massachusetts Gov. Deval Patrick. “But I’m skeptical based on the past … We’ve seen these things happen before and, unfortunately, we default back to the way we always do things.”

Ever since Biden’s election, Democrats recognized they were headed for an election buzzsaw — with the party in power traditionally suffering losses in a new president’s first midterm. And last week laid bare the potential extent of the catastrophe. Yet about the only thing Democrats could agree on was that Congress needs to pass legislation to sell to voters and, more nebulously, that Democrats need to do a better job talking about it.

Even optimistic Democrats aren’t convinced it will work.

Danny Barefoot, a Democratic strategist who is assembling a focus group of suburban women in Virginia who voted for Biden last year and Republican Glenn Youngkin last week, said that even if “the environment improves considerably” for Democrats, “it’s still a loss of the House and probably a loss of the Senate … If you’re defining ‘screwed’ as losing our majorities, yeah, I think there’s not much that’s going to stop that.”

One veteran consultant in Washington said that after last week, he is advising early-career strategists to work on ballot measures or other non-candidate campaigns next year.

“We’re just going to get crushed,” he said, doubting Democrats would take any lessons from their beating.

The House’s passage of an infrastructure bill on Friday night marked a major, post-election victory for Democrats and Biden’s legislative agenda. But if last week was any indication, it’s not clear that the bill’s passage will matter in a midterm election a full year from now. Democrats last week did not appear to benefit from Congress’s passage of Biden’s $1.9 trillion coronavirus relief bill — seemingly a distant memory despite coming just months before votes were cast. Democrats will soon take up another round of wrangling over a larger social spending package, whose prospects in the Senate are unclear.

Meanwhile, even in seemingly performative ways, Republicans have settled on a blueprint for 2022. Having underestimated the significance of education as an issue in the gubernatorial race in Virginia, Democrats were still reading the exit polls when House Republicans, moving to nationalize an issue that was traditionally a strong suit for Democrats, introduced a “parental bill of rights” in the House. The National Republican Congressional Committee announced within hours of the election that it was expanding its map, adding 13 more Democratic-held House seats to its offensive targets in the midterms.

“Democrats are losing the messaging war,” said Kelly Dietrich, a former Democratic fundraiser and founder of the National Democratic Training Committee, which trains candidates across the country. “We talked about this in ‘20. We promised to solve problems, and rather than talk and brag and point out the fact that government is working the way it should — making sausage is messy — we’re bogged down in process, and in the meantime, the other side is capitalizing on issues that really matter to the day-to-day lives of voters.”

He said, “It’s got to get fixed in like eight to 10 months, and the prospects for ’22, it’s a year away, I don’t know … Honestly, I don’t know. We need some radical change within the Democratic ecosphere.”

None of this is new. Following Democrats’ losses in Virginia and New Jersey in the gubernatorial elections in 2009, Barack Obama’s White House downplayed the significance of the off-year contests, while prominent Democrats on the sidelines feverishly tried to make sense of why independents defected from the party, casting it as a “wake-up call.” It didn’t make a difference. The party sleep-walked all the way into the midterms the following year, when Democrats lost more than 60 House seats in what Obama described as a “shellacking.”

The landscape for Democrats today is even bleaker. Not only do Democrats hold a slimmer majority in Congress, but Biden’s low-40s approval rating — a metric closely correlated with a party’s performance in midterm elections — is much worse than Obama’s was at this point in his presidency.

The difficulty conducting a postmortem after an election like last week’s is that the losses were so widespread that it’s hard to pin defeat on any one thing. Democrats lost the culture wars, but they also got pinned down on the economy. They were drubbed in rural areas and with non-college educated whites, but they also lost independents in the suburbs. And two issues that worked so well for Democrats last year — the coronavirus and Donald Trump — no longer resonated as much with voters.

In the aftermath of the election, there was broad recognition that McAuliffe made specific missteps that a candidate in 2022 could avoid, like saying during a debate, “I don’t think parents should be telling schools what they should teach.” And there were certain things, like supply chain disruptions, rising gas prices and the electorate’s dim mood, that Democrats in Virginia could do nothing about.

But beyond that, Democrats were reading Virginia like a Rorschach test. Progressive Democrats saw the election as a rebuke of the corporate wing of the party and Clintonesque Democrats like McAuliffe. Centrists saw it as a revolt against the “wokeism” of the left. For rural Democrats, the election confirmed that Democrats need to focus more on voters outside of cities. For urban Democrats, it confirmed the need for Congress to pass legislation that might appeal to the party’s base. 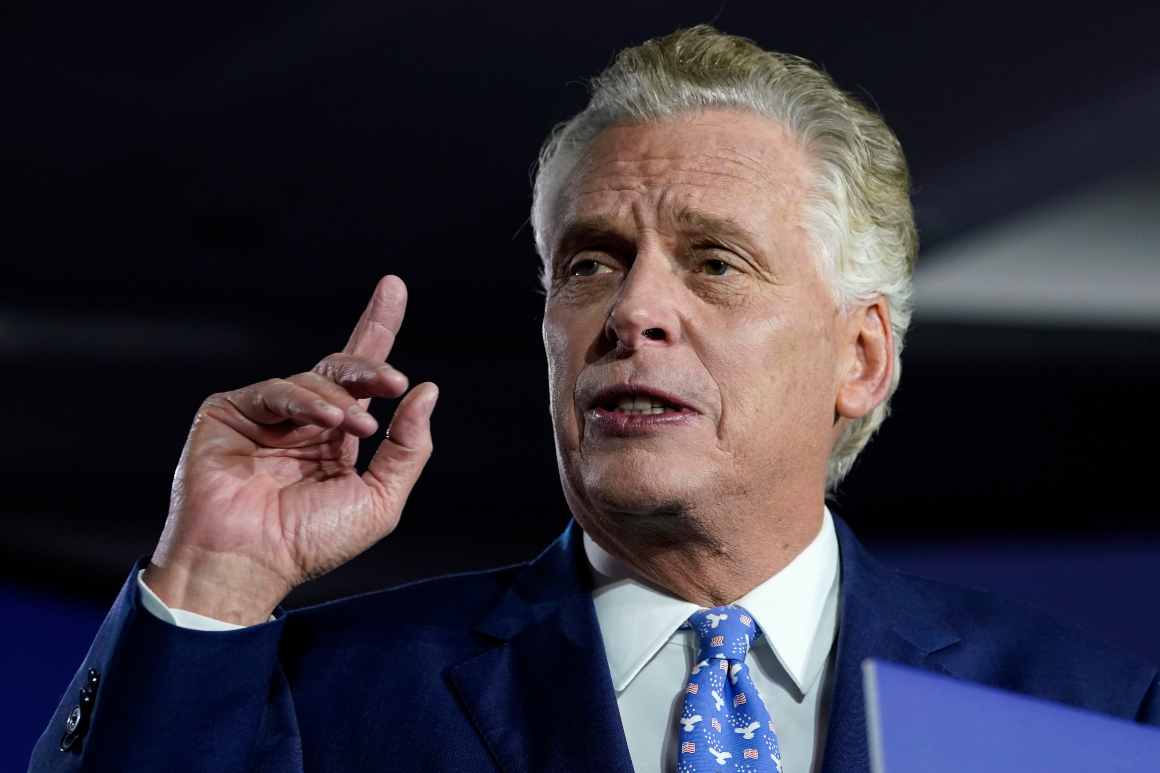 One Democratic strategist who works with major party donors predicted that the party will “spend a ton of money” examining the result of last week’s elections, “learn the same things we already know, and still f— up the midterms.”

Conventional wisdom within the Democratic Party is that if the pandemic eases and inflation is contained next year, the electorate’s view of Biden — and the party, by extension — will improve, though likely not enough to maintain Democrats’ majority in Congress. And nearly every Democrat agrees on two other things: First, if Democrats can pass policies like universal pre-K and expanded family leave, the party’s candidates will have something popular to run on; and second, Biden needs to do a better job selling whatever policies he manages to get passed.

Ray Buckley, chair of the New Hampshire Democratic Party, said Democrats could find success talking “about kitchen table issues,” though he acknowledged that nationally, “the struggle is how to talk about issues that resonate with the swing voter and our base at the same time.” Matt Bennett, of Third Way, said one lesson is to “always take culture war attacks very seriously … There’s always going to be one, and the Republicans have been super clear about this, that we are going to be fighting the culture wars, so that’s a huge red flag for Democrats.”

Following what he called a “warning bells election,” Bennett said “there are very, very important lessons to be learned.”

The midterms are still a year away, and Democrats did win some down-ballot races last week. Joseph Geevarghese, executive director of the Sen. Bernie Sanders-aligned group Our Revolution, said, “I don’t think the door is closed for us.”

“The question,” he said, is whether Democrats nationally can adjust.

Elena Schneider contributed to this report.