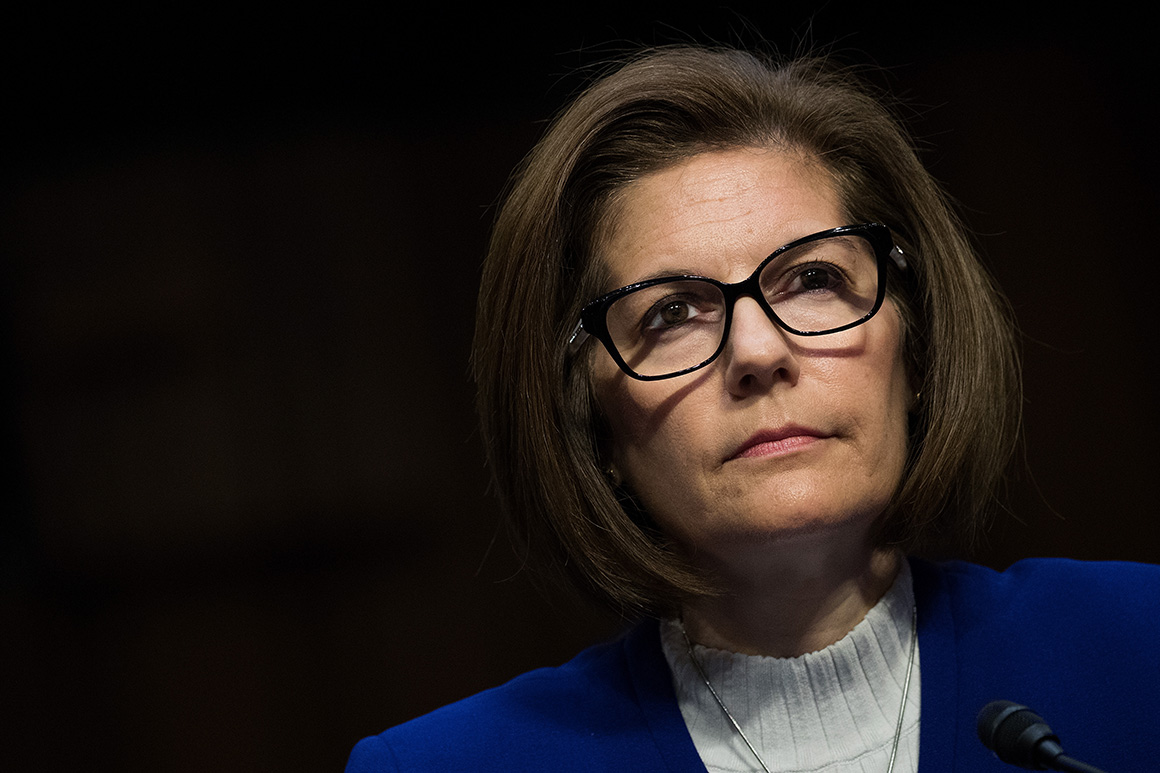 A war between Harry Reid’s political machine and pro-Bernie Sanders forces is dividing Democrats in a key swing state — and dragging in the Democratic National Committee on the eve of a critical midterm election year.

The Nevada feud, which erupted earlier this year when insurgent Sanders supporters took over the state party from allies of the former Senate majority leader, has spiraled into a flurry of resignations, embarrassing headlines and the creation of a fully operating shadow party.

The rift is threatening Democrats’ chances of defending a Senate seat in 2022 that they can’t afford to lose, in what’s already shaping up to be a back-breaking election cycle for the party. President Joe Biden won Nevada by only 2 percentage points — a far more narrow margin of victory than he enjoyed in Virginia, where Republicans romped in the gubernatorial race last week, and New Jersey, where the GOP came close to defeating the incumbent Democratic governor.

“So much time has been spent on this ongoing infighting. There’s not a lot of time until the election, and it’s really drawn resources and time and energy from recruiting a new slate of candidates and building those community bonds that you need,” said Shaun Navarro, former co-chair of the Las Vegas chapter of the Democratic Socialists of America, which helped elect the left-wing state party leadership. “These are the reasons people don’t like politics.”

The clash in Nevada has also left the coordinated campaign for top Democrats in the state without precious voter data, robbing Sen. Catherine Cortez Masto and Gov. Steve Sisolak of a key asset before they both face reelection next year.

The power struggle between Sanders’ backers and the nationally renowned political operation built by Reid, which installed Democrats at all levels of government in Nevada, dates back years. In the state’s 2016 presidential caucuses, Sanders narrowly lost to Hillary Clinton, and his campaign accused party honchos of rigging the state convention that finalized presidential delegates. Sanders forces, meanwhile, were accused of throwing chairs in a wild scene, and the state party filed a complaint to the DNC claiming that they engaged in “extra-parliamentary behavior — indeed, actual violence,” something the Sanders team strongly denied.

The Reid machine insists the new state party has no clue how to win a general election. Its solution was to bypass the state party by running the coordinated campaign in the midterms out of the local party in Nevada’s second-biggest county. Progressives see the organization behind that effort in Reno’s Washoe County — known as Nevada Democratic Victory — as an anti-democratic attempt to circumvent a leadership slate that won fair and square.

Shortly before progressives and socialists won control of the Nevada Democratic Party this year, the party staff transferred $450,000 to the Democratic Senatorial Campaign Committee — and then quit. (The DSCC is now sending money to Nevada Democratic Victory.)

Nevada Democratic Party chair Judith Whitmer “is an unknown quantity and said some things about the party and elected officials that kind of scared people, so they were reluctant to entrust the millions and millions of dollars that goes through a coordinated campaign under her leadership,” said Clark County Commissioner Tick Segerblom, who in March unsuccessfully ran against Whitmer with the Reid machine’s backing. “The powers that be thought that just rather than work with somebody who’s apparently antagonistic, we’ll just create a separate organization.”

Whitmer said “moderates and progressives are going to have to work together” to succeed in 2022 and that all Nevada Democrats share an “absolute commitment to making sure that we keep Republicans out of office.”

But in truth, unity has been elusive. The state party’s treasurer, Howard Beckerman, resigned in May after Whitmer put out a statement saying the country had turned “a blind eye to the injustice and violence committed by the Israeli government.” He called her comment “divisive” and said it “has the potential to cost elected Democrats throughout Nevada their elections in 2022 and beyond and severely hamper our fundraising.”

Party infighting again made the news in September, when Nevada Democratic Party leadership proposed changing the party’s bylaws to revoke the charter from any group that collects funds in the name of the state party without its authorization. Though Whitmer denies that it was drafted to kneecap the Washoe County Democrats and Nevada Democratic Victory, the move was widely seen as meaning to do just that.

Party leaders eventually withdrew the proposal, but not before telling committee members in a memo that they had alerted the Federal Election Commission “that Nevada Democratic Victory falsely claimed, to the Federal Government, affiliation with the Nevada State Democratic Party.”

The two sides are currently locked in a battle over voter data, one of the party’s most important commodities. Nevada Democratic Victory lacks access to the state party’s voter file. Whitmer said “they haven’t come to the table” to discuss purchasing it, and that “they’ve had contracts on their desks for a while now.” A person close to Nevada Democratic Victory said it has not been offered any contract to get ahold of the data.

This dispute has engulfed the national party, with aftershocks being felt far beyond Nevada’s borders because the DNC and state parties across the country are in the midst of trying to finalize a voter data sharing agreement. Four state party officials outside Nevada told POLITICO that DNC leadership has proposed new language in the deal that they believe is in response to the insurgent takeover of Nevada’s party.

DNC leaders have asked state parties to sign onto an agreement to allow candidates to obtain base voter file access from the national party if a candidate and state party are in dispute, said the sources, who requested anonymity due to the sensitive nature of the talks. Under this scenario, county parties could administer access to the data while running coordinated campaigns — which would “neuter” state parties, said one alarmed state party official.

Several state party leaders are apoplectic about the change — they say it would weaken not only Nevada’s party but also state parties around the country — reigniting a yearslong power struggle between the DNC and state parties, which have long felt neglected by the national operation.

“We should not be creating policies to go around state parties,” said Jane Kleeb, chair of the Nebraska Democratic Party, “and quite frankly to get to the ultimate goal of a small group of D.C. insiders, which is, from their perspective: State parties are irrelevant, they consume our time and resources; it is better to just build outside infrastructure to go around them.”

A DNC aide denied that the language was in any way prompted by Nevada, and said it was brought about after party dysfunction in Alabama: During his 2020 reelection campaign, former Sen. Doug Jones lacked voter file access for months because he didn’t have a working relationship with the state party, a source said. (One state party official said “any insinuation that this is about Alabama is not only complete bullshit, It’s utter garbage.”)

State party officials have reluctantly greenlighted the changes to the data-sharing agreement that they call the “Nevada clause” because, they said, the DNC, DSCC and Democratic Congressional Campaign Committee had previously claimed ownership of some state party data — and this deal keeps those committees from walking away from state parties. It is now being delayed by other matters involving voter data, sources said. Until it is signed, the DNC is holding up nearly $6 million in funding to state parties, according to multiple state party officials.

Ray Buckley, chair of the New Hampshire Democratic Party, said, “I have confidence that there will be an agreement. Negotiations are always difficult, but at the end of the day everyone agrees that our job is to elect Democrats.”

Lucas Acosta, a senior spokesperson for the DNC, said “we expect to have our data agreement signed with state parties in short order. We all share the same goals of having the best data, keeping candidates within our system, and doing everything we can to create the strongest technology infrastructure for our campaigns.”

Back in Nevada, there have been attempts to make peace between the two warring sides, or at least keep the lines of communication open. Whitmer said she has had three conversations this year with Reid, who still plays a kingmaking role even in retirement, about “moving everything forward and unifying the party.” Reid told Nevada Newsmakers that Whitmer is a “good Democrat,” and that “the so-called split in the Nevada Democratic Party is exaggerated because there isn’t one.”

Luckily for the Democrats, the GOP is perhaps even more divided in Nevada, with state Republicans recently suing and threatening to countersue each other, and two separate entities claiming to control the party in Clark County.

Whitmer said she hopes to strike a deal with Nevada Democratic Victory that spells out the responsibilities of each group. She previously proposed that the state party run the coordinated campaign for down-ballot candidates, while the Reid machine remains in charge of the top of the ticket.

“There has to be some sort of working agreement so that there isn’t a duplication of resources, that resources are being maximized and being spent effectively, and we’re in compliance with all the FEC regulations,” she said. “But I’m confident that we’ll get there and that we’re going to have a unified Democratic Party going into 2022.”

The Reid operation’s Nevada Democratic Victory did not respond to questions about such an arrangement. But a person close to the group said it’s up to the state’s Democratic candidates to decide how to run the coordinated campaign for the midterms — and they’re going with Nevada Democratic Victory. The party’s proposal “defies what campaigns and the national committees want in 2022,” the source said.