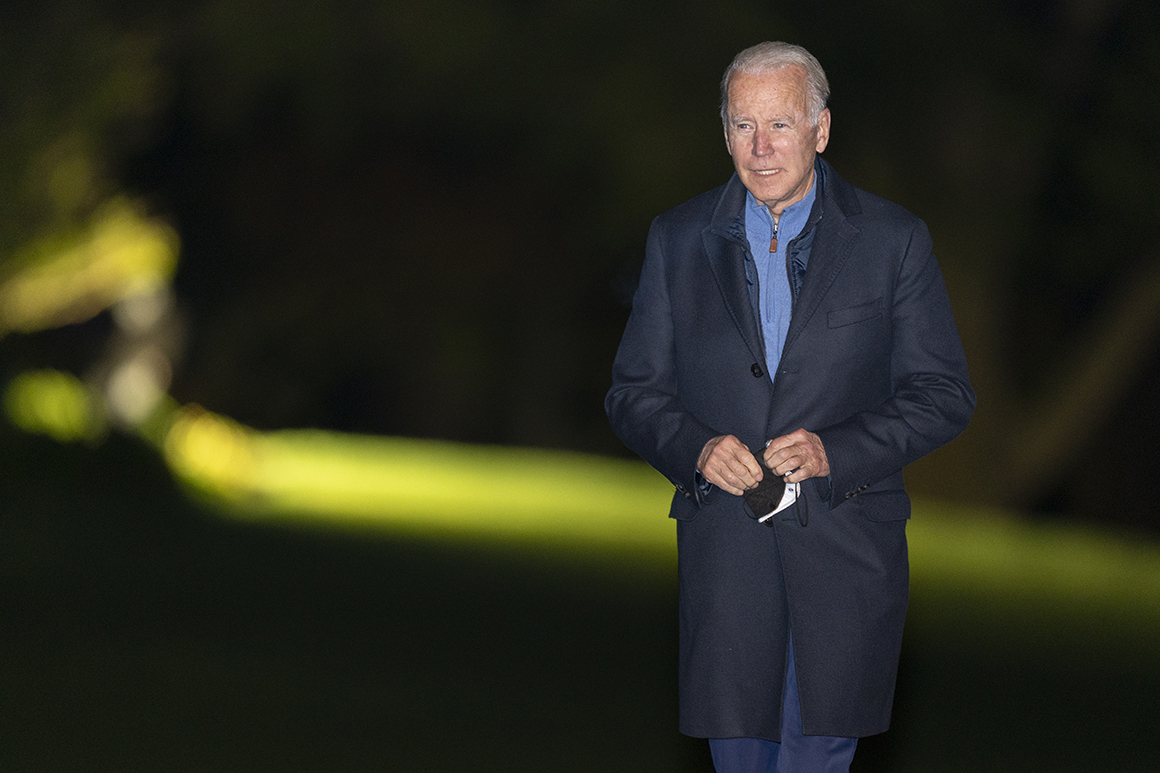 But even as Democrats were processing a battering in the Virginia governor’s race and the uncomfortably close gubernatorial election in New Jersey, the White House and officials across the party pledged to forge ahead with the twin pillars of the president’s domestic agenda. Several made the case that Tuesday’s results only added to the pressure for them to do so.

“We have to show we can govern,” said Rep. Scott Peters (D-Calif.), citing a recent breakthrough in talks to lower prescription drug prices for seniors and allow negotiations in Medicare. “The picture has been of Democrats sparring amongst ourselves. That’s probably not the best face to put out. I hope that there’s more of working toward agreement, like we had today, than openly sparring with each other.”

“We have the ability and the responsibility to govern and I think that’s what we should focus on,” Peters added.

The determination to stick with the $1.75 trillion social and climate spending bill underscores just how much the Democratic Party has bet its future on Biden’s legislative priorities. And it comes right as the president’s own political tailspin has put him in a weakened position to help them sell it.

The White House is expected to turn up the salesmanship of its plans, arguing that the results in Virginia and New Jersey, where things remained too close to call, are in part a reflection that voters want to see Congress get things done, a person close to the White House said.

Biden’s advisers insist the political environment could look vastly different next fall, when members of Congress face voters. Before polls closed Tuesday, Pfizer’s Covid-19 vaccine cleared its last major regulatory hurdle for kids ages 5 to 11, with the Centers for Disease Control and Prevention’s independent vaccine advisers offering a unanimous endorsement. And the drug pricing provision Democrats were working to revive in the social spending package was generating outright glee among party leaders who contend Republicans would be forced to choose whether to oppose one of the most popular provisions under discussion.

But Biden’s advisers also acknowledge none of these breakthroughs will matter if they can’t sell their achievements to voters. And privately, several Democrats complained that it was Biden himself who helped slow progress on his own agenda by giving progressives tacit approval to hold up a vote on bipartisan infrastructure legislation as they hashed out the social spending plan. Notably, the president was returning from a climate summit overseas — accompanied by close aides including his top political adviser — when the election results came rolling in.

The president’s sagging popularity — recent surveys showed him under water by double-digits in Virginia, a state he won by 10 percentage points in 2020 — created insurmountable headwinds for Democrat Terry McAuliffe. Biden’s approval rating in Democratic-leaning New Jersey was equally bleak, though virtually no one in the party predicted it would harm sitting Gov. Phil Murphy. And though historical trends dictate that the party in power loses these elections, it still set off a round of recriminations and finger-pointing down the party ranks.

“Obviously, the president’s 42 percent approval rating is not helpful in a race like this,” said Rep. Don Beyer, a Virginia Democrat. “If it were 55 or 60 [percent], we’d be sailing.”

“The challenge is he’s laid out a very popular agenda with the American people that has not been fully approved yet,” added Beyer, who lost his own race for Virginia governor in 1997.

As the bad news for Democrats poured in Tuesday evening, the party’s moderates blamed progressives for withholding their support for Biden’s massive infrastructure bill, while progressives charged centrists with stalling and watering down the president’s agenda. The stinging rebuke for Democrats was already spurring other calls from party leaders to rehabilitate a brand that’s been tarnished by infighting and a lack of action.

“Being anti-Trump is not enough,” said former Rep. Tom Perriello, a Virginia Democrat who also lost a bid for governor in the 2017 primary. “Democrats need to run on results, and this should light a fire under frontline Democrats to get Build Back Better passed.”

A senior Democratic official working on the upcoming midterms warned that if Tuesday’s results appeared lackluster, “it will get so much worse if we don’t pass the agenda and aren’t able to run on it.”

Another Democratic strategist, who didn’t want to speak on the record before the results were final, warned of dire consequences for the party if infighting keeps up. “Democrats need to stop fighting each other and start delivering for voters. If we don’t, 2022 is going to be brutal.”

To move his legislative priorities through Congress, Biden still must resolve major policy and procedural disputes within his party. A single Senate Democratic defection would doom the social spending bill, and Sen. Joe Manchin (D-W.Va.), who has been openly wavering on the proposal, has routinely expressed fears of deficit spending and inflation and insisted that aspects of the social spending plan be more carefully studied.

To dig out of his political predicament, the president may need a lot more than advancing legislation, however. While a smoother process would have avoided months of backbiting, the gubernatorial contests also highlighted potentially potent issues that had little to do with Biden, namely education, the rights of parents and taxes.

Virginia alone was also never going to be a particularly useful predictor for the midterms. In 2013, McAuliffe himself bucked the decades-old trend of the president’s party losing the state, when he narrowly captured the commonwealth’s governorship while Barack Obama was in the White House. But a year later, Republicans netted nine Senate seats in the 2014 midterm election, the largest pickup since 1980, along with another 13 seats in the House.

Eleven years ago, when the Democratic Party unexpectedly lost Ted Kennedy’s Massachusetts Senate seat to Scott Brown, its lawmakers reacted by openly wondering whether they needed to abandon their pursuit of a health care overhaul. House Speaker Nancy Pelosi admonished then-White House chief of staff Rahm Emanuel for pushing to scale back their ambitions. In the process, she convinced Obama to plow forward with Obamacare, which he did.

This go around, the party has a much smaller majority in each chamber and is considering an even more expensive and far-reaching piece of legislation, one that’s been the subject of months of painstaking negotiations. Tuesday night brought recriminations. But no one — at least immediately — called for a pause in considering the legislation.

“I don’t think this complicates passage,” said Ben LaBolt, Obama’s 2012 campaign press secretary. “I think it helps accelerate it. It’s clear to the average Democratic member of Congress that they need to go into the election with a strong case that they’ve helped families economically in the short and long term. These bills do that.”