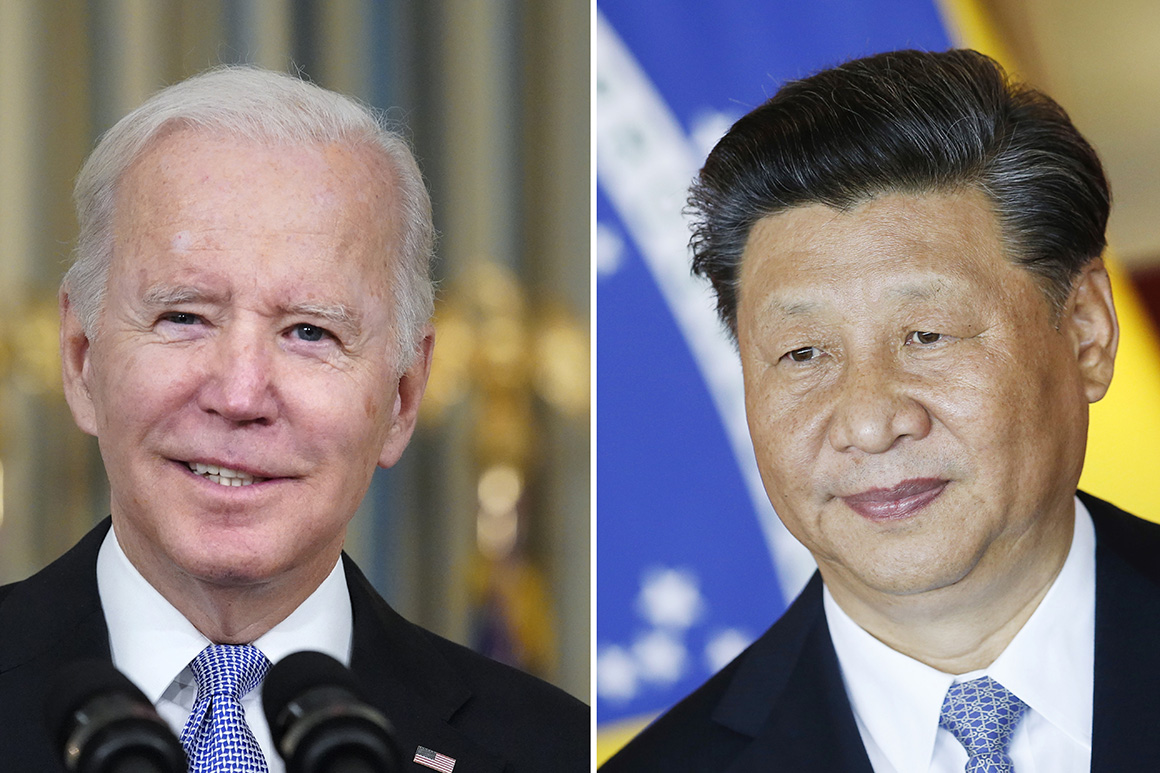 Relations between Beijing and Washington have been fraught since before Biden became president, with rising tensions over Taiwan, political angst over Covid origins and a host of tariffs that have frustrated economic ties.

As the two leaders prepare for their first substantial meeting of the Biden presidency, bilateral messaging downplaying the event’s ambitions as well as a mutual decision to keep its agenda under wraps reflect efforts to lower public expectations of a significant rapprochement or big deliverables.

But beyond performative goodwill gestures, people familiar with the upcoming meeting say, both leaders will likely seek agreement on a handful of short- and medium-term initiatives developed by bilateral working groups to reduce frictions, while signaling alignment on wider geopolitical concerns including North Korea and Iran.

“Both sides recognize they have real differences, that they are going to compete, but it is essential to keep it peaceful, within bounds and don’t want to stumble into war,” said Winston Lord, former assistant secretary of State for East Asian and Pacific Affairs under President Bill Clinton.

That approach echoes a statement Friday by a senior administration official who emphasized the meeting “is not about seeking deliverables, or outcomes … [but about] setting the terms of an effective competition.”

The meeting’s actual agenda hasn’t been publicly disclosed. White House press secretary Jen Psaki released a statement Friday confirming the meeting’s date, but limiting comment on its focus to “ways to responsibly manage the competition between the United States and the PRC, as well as ways to work together where our interests align.”

Chinese Foreign Ministry spokesperson Hua Chunying issued her own detail-free confirmation Saturday of the meeting in a one sentence statement that the two leaders would “exchange views on China-US relations and issues of mutual interest.” And Chinese Foreign Minister Wang Yi expressed his hope to Secretary of State Antony Blinken in a Saturday phone call that the meeting will “bring bilateral relations back onto the track of sound and steady development,” but likewise shared no details.

Those statements reflect a joint strategy to moderate expectations about possible results by referring to the event as a “virtual meeting” rather than as a summit.

But there is reason to hope the meeting will green-light initiatives brainstormed in recent weeks by bilateral working groups that target more easily addressed issues. “There is the real possibility of the meeting producing ‘sweeteners,’ that address particular aspects of the trade relationship,” said a D.C.-based diplomat familiar with the focus of those working groups. However, the diplomat cautioned the two sides may choose to announce those initiatives in time-delayed fashion post-summit, rather than as immediate deliverables.

That’s music to the ears of a U.S. business community for whom the status quo on U.S.-China trade relations is increasingly unacceptable. “We want stability [and] we are concerned that the tariffs may become perpetual and cause considerable long-term damage to both economies, while distorting the overall bilateral relationship,” said Craig Allen, president of the U.S.-China Business Council, a D.C.-based lobby group, in a written statement to POLITICO.

Biden has maintained key aspects of former President Donald Trump’s trade policy, including tariffs that China considers unfair, and is pressuring Beijing to fulfill its commitments under the Phase One U.S.-China trade deal implemented in January 2020. U.S. Trade Representative Katherine Tai last month announced that the Biden administration’s ultimate goal was to establish a bilateral “durable co-existence” defined by dialogue. The Biden-Xi meeting gives the two leaders an opportunity to make gestures toward a better trade relationship necessary to that goal.

“The potential low-hanging fruit would be Chinese commitments with respect to certain intellectual property issues … and there’s room for potential movement in particular areas of tension including [Chinese] steel, aluminum and solar panels,” said Gregory Shaffer, director of the UC Irvine Center on Globalization, Law, and Society. “The U.S. could negotiate something similar to what it recently did with Europe in the form of cutbacks on certain tariffs, while creating protection for American industries for a shock of massive Chinese imports.”

The meeting also gives Biden and Xi an opportunity to demonstrate symbolic goodwill by announcing their willingness to work together on a host of thorny regional and global geopolitical security issues. U.S. progress on key issues — including curbing North Korea’s ballistic missile development program and prodding Iran back into compliance with an international accord on its nuclear program — hinge on China applying its diplomatic and economic leverage.

“The mere affirmation of the fact that both countries can be on the same page and at least be willing to negotiate on North Korea, Iran and even to some extent Afghanistan makes an important, clear-cut statement that alongside the extreme competition between both countries, there are still areas where they can work together,” said Willy Wo-Lap Lam of the Chinese University of Hong Kong.

Absent from the agenda will be any meaningful discussion on hot-button issues that could derail the meeting, such as human rights and China’s tightening chokehold on Hong Kong. With regard to U.S. concerns over Chinese government abuses against Xinjiang Uyghurs, don’t look for Biden to trot out the word “genocide,” but instead use a less-inflammatory reference similar to what he did in a February CNN town hall.

Taiwan, a perennially fraught bilateral issue, will be even more so on Monday given the recent uptick in tensions over the self-governing island. The U.S. and regional allies including Japan have been dismayed by an intensifying Chinese campaign of military intimidation towards Taiwan.

Likewise, the Chinese government has expressed concern over recent U.S. moves and statements that Beijing has interpreted as encouragement for Taiwanese pro-independence advocates. China sees that as a violation of long-standing bilateral agreements on Taiwan’s relationship to the U.S., as enshrined in the Three Communiqués issued jointly by the two countries from 1972-1982. (U.S. lawmakers have further clarified the U.S. relationship with Taiwan via the 1979 Taiwan Relations Act and the Reagan administration’s Six Assurances.)

Chinese concerns about the U.S. relationship with Taiwan have been heightened by Biden’s declaration at a CNN town hall last month that the U.S. will defend Taiwan in the event of a Chinese invasion: “Yes, we have a commitment to do that,” Biden told host Anderson Cooper. Psaki was forced to refute speculation that Biden had ended the longstanding policy of “strategic ambiguity” regarding a U.S. response to a Chinese attack on the self-governing island. Wang implicitly referenced Biden’s statement in his Saturday call with Blinken by criticizing “recent wrong words and deeds on the Taiwan question.”

“On contentious issues, particularly the geopolitical issues in the Taiwan Strait or the South China Sea, Beijing’s overall very aggressive power projection, I don’t think there will be a meeting of the minds,” said Lam. “And on human rights, Xinjiang and Hong Kong, both sides will just agree to disagree because there’s no real room for maneuver for both sides on these issues.”

But experts note that any absence of explicit mention in the post-summit briefing of potential bilateral moves to deescalate tensions over Taiwan won’t necessarily mean that such initiatives weren’t discussed. The sensitivity of the Taiwan issue — and intense domestic pressure to ensure no hint of concessions in established positions — will likely relegate any initiative to reduce tensions in the Taiwan Strait to the status of unofficial and unremarked.

“Instead of transiting the Taiwan Strait with naval vessels once a month, [the U.S. ] can do it every other month while the Chinese can begin to reduce the frequency of their presence within Taiwan’s air defense zone,” said Robert Ross, political science professor at Boston College. “Both sides can walk it back through implicit policy adjustments, and that’s not hard to do.”

The most important potential long-term impact of the virtual meeting will be a mutual recognition that the breakdown in bilateral communications that began under Trump is harmful and counterproductive.

“I think after the Biden-Xi meeting, the trend will be set for at least more frequent ministerial-level or cabinet-level meetings between senior officials of both sides similar to what we saw under President [Barack] Obama … that would be big progress,” Lam said.