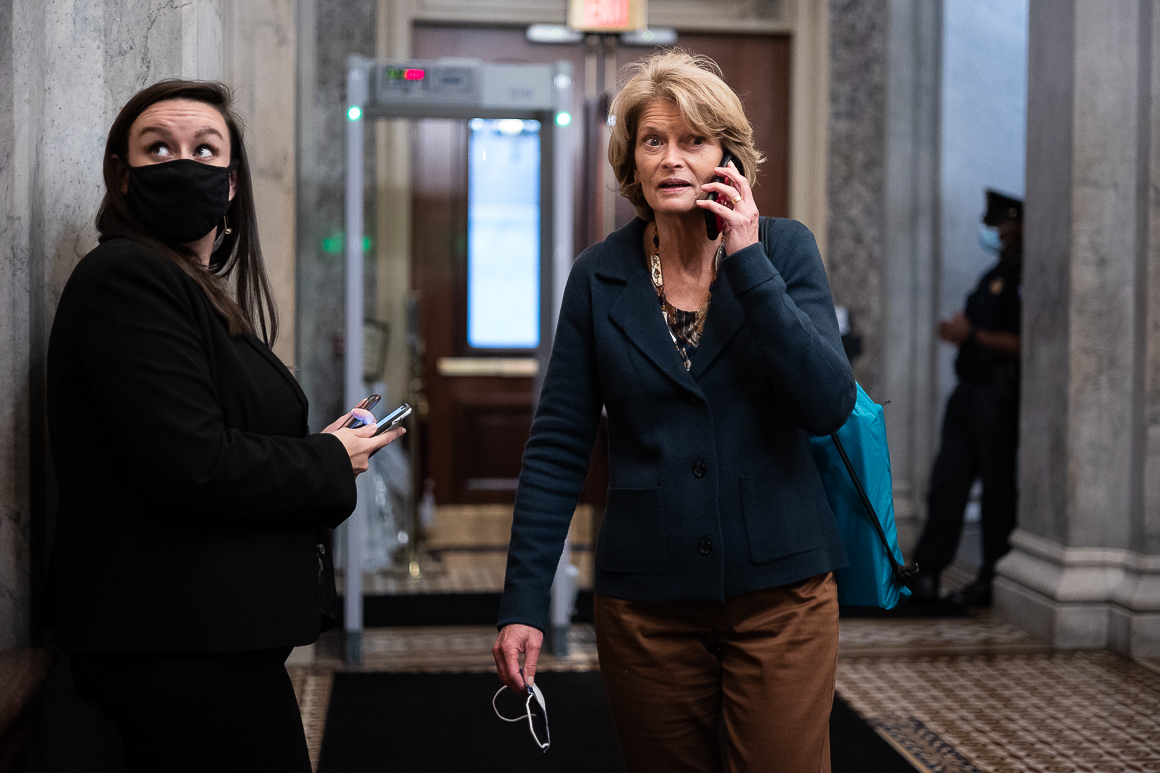 Lisa Murkowski is taking on former President Donald Trump and a restive GOP base. Again.

The moderate Alaska Republican announced on Friday morning she will run for reelection next year, leaning into a fight with Trump over her future in the Senate. Murkowski was one of seven Republican senators who voted to convict Trump of inciting the Jan. 6 Capitol insurrection, and has not shied away from questioning his place in the party.

Trump has backed former Alaska Commissioner of Administration Kelly Tshibaka over Murkowski, making it the most perilous GOP primary for an incumbent next year. Murkowski is the only Republican senator running for reelection in 2022 who voted to convict Trump in his impeachment trial earlier this year.

Murkowski did not mention Trump in her announcement even as he hangs over every single GOP primary in the nation.

“My heart is, and always has been, in Alaska, and that’s why I am proud to announce my campaign for reelection to the US Senate in 2022,” Murkowski said. “I pledged to be Alaska, always. I’m still committed to those values and meeting the challenges Alaskans face today.”

Murkowski has been in office since 2002, appointed by her father Frank, after he became governor. She lost her 2010 primary to tea party candidate Joe Miller, but won a write-in campaign in the general election — cementing her as a legendary politician in Alaska and a key player in the Senate no matter which party controls the majority.

This cycle, the Alaska Republican is facing altogether different factors, with Trump replacing the tea party as a foil to centrists like Murkowski. Several key members of Trump’s 2020 campaign are serving as Tshibaka’s senior advisers and Trump has repeatedly vowed to help oust Murkowski.

In a statement, Tshibaka labeled Murkowski “Biden’s Chief Enabling Officer” for her work across the aisle and dinged Murkowski for working “against President Trump, whose policies were the best that Alaska has ever known.”

As of October, the incumbent had $3 million on hand compared to about $300,000 for Tshibaka. Murkowski has the support of the National Republican Senatorial Committee and Senate Minority Leader Mitch McConnell. In a recent interview, McConnell said the NRSC, the Senate Leadership Fund and GOP senators are “all in for Lisa.”

“She’s a remarkable politician. Other than Strom Thurmond, she’s the only person in American history to win write-in” to the Senate, McConnell said.

What’s more, Alaska voters changed the state’s primary system to insulate her from a Tshibaka head-to-head. The top four vote-getters advance to a run-off election, and the winner of that round will be determined by ranked-choice. That means even if Tshibaka outpaces Murkowski in the state’s open primary, Murkowski could still win the general election.

It’s also apparent that Murkowski will have plenty of air cover. Murkowski’s reelection campaign announcement comes after a new super PAC, “Alaskans for Lisa,” filed paperwork with the Federal Election Commission this week. Still, in an interview in August, Murkowski expressed hope the state’s system will help steer the country away from increasingly divisive politics.

“It actually helps to ensure that you don’t see these primary results, where the individual further to the right prevails in a primary and then is not able to prevail in a general,” Murkowski said. “I can’t stand the destructive, negative nature of so much that we see in campaigning. And I don’t think most people appreciate it.”

Murkowski’s coalition includes some Democrats, Native Americans, centrist Republicans and the state’s independent voters. It’s not clear if Democrats will mount a serious challenge in Alaska, given their close relationships with Murkowski and the fact that a Democrat hasn’t won a Senate race there since 2008.

“People understand that they have a person that understands Alaska and has Alaska in her blood and in every part of her veins and every morsel of her body,” Manchin said in April.

Murkowski was a key player on the bipartisan infrastructure bill that President Joe Biden will sign on Monday, one of several moves that irked Trump. She also has developed a working relationship with Senate Majority Leader Chuck Schumer, though after considering whether to vote for Democrats’ coronavirus relief bill, Murkowski ended up opposing it.

She has, however, supported some of Biden’s embattled nominees. She backed Interior Secretary Deb Haaland and Rachel Levine as a health official, the first openly transgender person to win confirmation in the Senate. Murkowski has also been the Republican senator most involved in rewriting the Voting Rights Act.

Though she’s often in the mix in Washington, Murkowski remains engaged with the particular issues facing a massive and sparsely populated state, inlcuding with transportation and health care. Last week during an interview about her party’s win in Virginia’s gubernatorial race, Murkowski had her head buried deep in papers documenting the spread of coronavirus in Alaska, which has struggled of late with its pandemic response.

But even as she attends to the sluggish economy and dire coronavirus situation in Alaska, she also said she’s paying attention to the national political mood — and it looks good for Republicans.

“You pay attention to how these races are going,” she said. “I certainly think that it is a signal to Biden that he’s got some real challenges in front of him in terms of the level of support.”