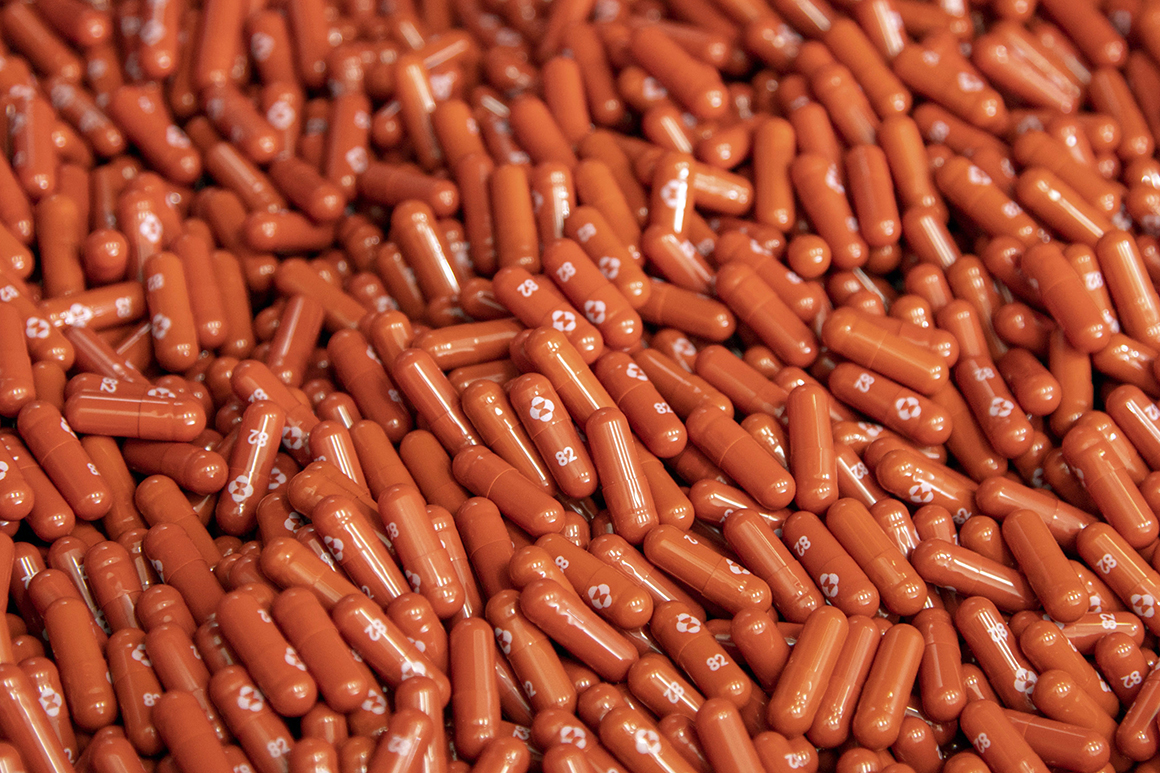 The Food and Drug Administration will ask independent advisers Tuesday whether to limit the use of a Covid-19 antiviral pill in pregnant people due to potential risks, according to agency documents posted Friday.

Merck and partner Ridgeback Biotherapeutics manufacture the drug, molnupiravir, which they say cuts in half the risk of hospitalization or death from Covid for patients with mild to moderate disease and has boosted hopes of finding a simple at-home treatment for the virus. Regulators are considering whether to authorize the pill’s emergency use in adults who have been experiencing symptoms for less than five days and, if so, how to define who’s considered high risk.

But studies in rats showed miscarriage and developmental abnormalities at the highest doses, leading the companies to recommend against using the drug during pregnancy — and for people who may get pregnant to use contraception while taking the pill and for four days following the last dose. Pregnant people were excluded from clinical trials.

Limiting the drug’s use to people who aren’t pregnant would prevent a significant at-risk population from accessing a treatment that likely could be prescribed for at-home use. Pregnant people with Covid may still receive monoclonal antibody treatments, but they must be administered in a health care setting.

The FDA will ask advisers to consider an alternative approach, where the drug’s use wouldn’t be recommended for pregnant people but health care providers could prescribe it in certain scenarios where the benefits are believed to outweigh the risks. The agency will also prod advisers to discuss whether concerns about the drug’s use in pregnant people extend to individuals who may become pregnant in the future.

The agency also will seek advice on an observed increase in the rate of mutations of the coronavirus spike protein among molnupiravir patients, including what risk or monitoring strategies should be considered.

Background: Merck announced it was seeking emergency authorization from FDA for the use of its drug on Oct. 11, days after reporting that the antiviral pill appeared to halve the risk of hospitalization or death from Covid in people at risk of developing severe disease. The prospect of a pill Covid patients could take to stave off the worst effects of illness could help turn the tide of the pandemic by easing the strain on health care systems, many of which are already overwhelmed heading into the holiday season.

But the availability of antivirals won’t be a panacea. The Merck drug and another one developed by Pfizer — boasting an even-higher efficacy rate — seem to yield the best results when taken soon after symptoms emerge, meaning patients would need to be quickly diagnosed and given a prescription to have the best chance of avoiding severe outcomes.

Participants in the Merck trial had one or more of several conditions considered risk factors for severe disease, including diabetes, obesity, chronic kidney disease, serious heart conditions, chronic obstructive pulmonary disease, cancer or being over 60.

Pills are easier to manufacture and distribute than therapies like monoclonal antibodies, which are administered in health care settings. But the three vaccines available in the U.S. remain the most effective interventions to prevent serious disease, hospitalization and death from Covid.

What’s next: FDA’s external antimicrobial drug advisers will meet Tuesday to decide whether to recommend the agency green-light the Merck pill’s use. A similar meeting for Pfizer’s antiviral pill has yet to be scheduled.