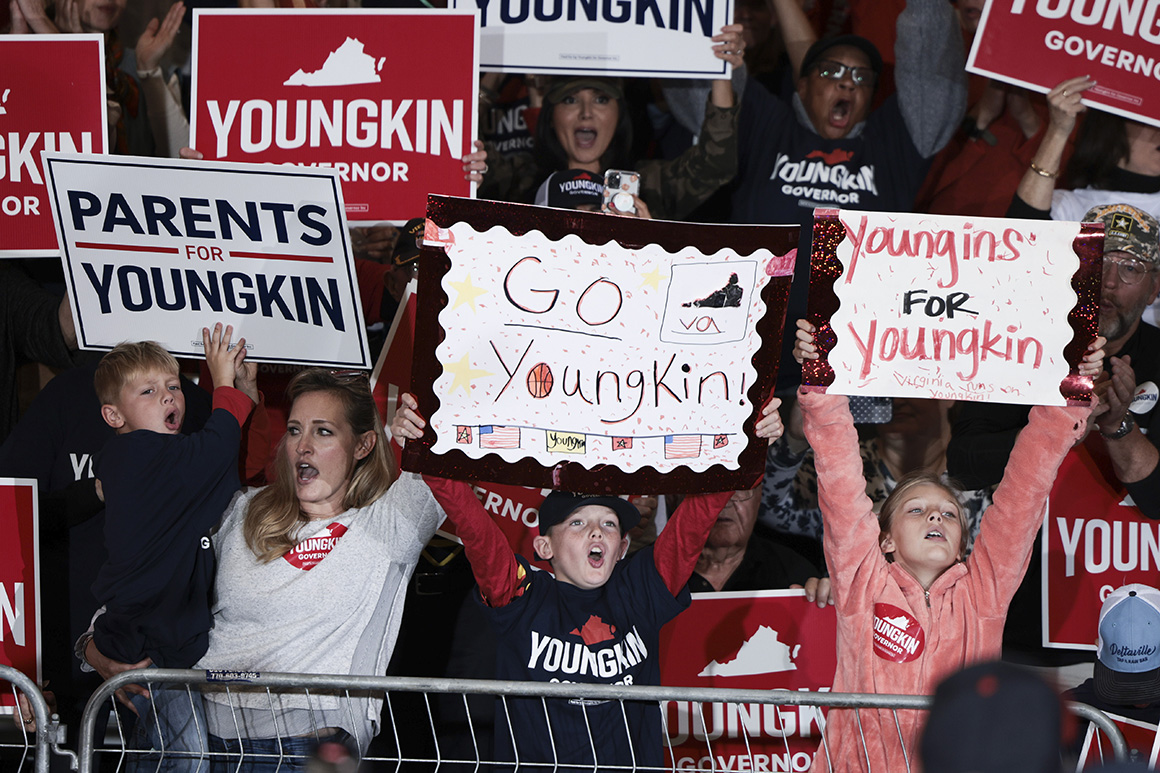 Glenn Youngkin tapped into parents’ pandemic-era frustrations on his way to winning the Virginia governorship. Now fellow Republicans are betting big that they can also make education a winning midterm issue.

Youngkin started out as an underdog in a state where the GOP hasn’t won statewide for nearly a decade. But Republicans say his frequent messaging on education, stoking parental worries about progressivism in the classroom while urging them to play a greater role in schools, helped him pull ahead while his Democratic opponent, Terry McAuliffe, stayed stuck in the past trying to tie Youngkin to Donald Trump.

His win, along with that of other Republican candidates down-ballot in Tuesday’s Virginia elections, has the GOP giddy about its prospects for taking back Congress in 2022. House Minority Leader Kevin McCarthy publicly projected on Wednesday that Republicans could win back more than 60 House seats in the midterms next year.

“It was not just Virginia, but clearly Virginia was the loudest message,” House Minority Whip Steve Scalise (R-La.) said in an interview. “The Youngkin victory is one more sign that issues like school choice, parental involvement in their kids’ education, and standing up to union bosses is going to continue to be a major issue all around the country … Issues like school choice are going to be even more powerful messages next year.”

House Republicans are moving quickly to capitalize on Youngkin’s invocation of education, including rolling out a “parental bill of rights” and making it a messaging centerpiece moving forward. The politics of learning was already on the GOP’s mind, with lawmakers saying parents’ eyes were opened to details of their children’s curricula during a pandemic that necessitated more online learning.

And as education rose on the Republican agenda, so did culture-war-fueled opposition to critical race theory, or CRT — a longstanding academic concept positing that centuries of slavery and segregation led racism to be systematically embedded in U.S. institutions. Many Republicans have begun using the term as a catch-all phrase to describe how schools teach about race or American history.

Virginia’s schools do not teach CRT in its original form, but Youngkin successfully made it a bogeyman in the election. And it’s not just Republicans acknowledging that: Progressive Rep. Alexandria Ocasio-Cortez of New York said in an interview that “critical race theory, and their kind of weaponization [of it], was effective.”

“I do think that it certainly was a factor” in Youngkin’s defeat of McAulife, she added. “Because we continue to have extraordinary difficulties with having honest conversations about race in this country.”

On the campaign trail, Youngkin tapped into parental frustration over school closures during Covid and framed the gubernatorial contest as a debate about whether parents had a right to be involved in their children’s education. In particular, the Republican seized on McAuliffe’s comment during a debate that “I don’t think parents should be telling schools what they should teach kids” — which quickly became a GOP talking point.

Republicans in Virginia and on Capitol Hill have also seized on the Biden Justice Department’s announcement last month that it planned to combat violent threats against school board members. The GOP has cast that as an effort by Democrats to silence parents who want to protest against what’s happening in their local schools, from public health measures to lesson plans.

That push has only intensified after Youngkin’s win. On Wednesday, House Oversight Committee Republicans led by Ohio Rep. Jim Jordan sent a letter to the FBI demanding answers about how it planned to carry out Attorney General Merrick Garland’s memo directing DOJ resources to stop threats against school board members.

And Republicans are looking at proposals to scale back the federal government’s involvement in education as part of their forthcoming “parental bill of rights,” according to Rep. Virginia Foxx (R-N.C.), the party’s top member on the House Education and Labor Committee. Foxx warned that the party is still hashing out the details.

Rep. Lee Zeldin (R-N.Y.), who’s seeking a governor’s seat in a state that has swung more blue than Virginia for years, said he too has witnessed voter enthusiasm for a greater focus on education. He described Youngkin’s win as further reinforcement of what he’s already seen on the campaign trail.

The power of a specific education message hit home, Zeldin said in an interview, when he was “on the trail and speaking to a group of 700 Hispanics in the South Bronx about my positions on education — almost the entire group are Democrats — and they are emotionally, passionately responding to the message.”

Youngkin, a former private equity executive and political newcomer, made education a central part of his closing pitch to voters in recent weeks. His campaign dubbed its events “Parents Rallies.” And he flooded the airwaves with TV ads about parental involvement in schools, accusing Democrats and McAuliffe of trying to silence their voices.

Despite their admission that Youngkin benefited from channeling voter dissatisfaction with education during the pandemic, Democrats have yet to propose a more specific response beyond passing the infrastructure and social spending bills that form the core of their domestic agenda.

Congressional Progressive Caucus Chair Rep. Pramila Jayapal (D-Wash.) said Wednesday on MSNBC that Youngkin “appealed to parents in education” but argued that getting President Joe Biden’s signature bills through Congress could appeal to parents even more.

The party may yet mount a direct counterargument on education; Randi Weingarten, president of the American Federation of Teachers and a longtime Democratic ally, campaigned with McAuliffe in Virginia. Weingarten has blasted Youngkin and his anti-progressivism education message as using “lies, disinformation and fear to drive a wedge between voters.”

But Republicans like Utah Sen. Mitt Romney say McAuliffe miscalculated by campaigning with the face of the union in light of the fury shown by parents — over topics ranging from CRT to assault allegations.

“It was so completely out of touch with … the American people or the people of Virginia,” Romney said. “You had to shake your head.”

Democrats say they are appalled that the GOP is campaigning against CRT’s acknowledgment of the realities of institutional racism.

“Wow, that says a lot about who they are as a party, that they would use race as a dividing issue to try to take the majority back,” said Rep. Steven Horsford (D-Nev.).

Notably, the House’s two Black Republicans have forcefully pushed back against Democratic positions on education. Rep. Burgess Owens (R-Utah) said at a GOP education roundtable on Wednesday that a call for equity in schooling from some Democrats is centered on lowering “expectations for Black people,” which he called “as racist as you can get.”

One of Owens’ fellow freshmen took a bigger-picture view to describe Youngkin’s win as built on not just education messaging, but on meeting voters where they live.

“Youngkin’s playbook is sure to be an example of how to win in ‘22,” said freshman Kat Cammack (R-Fla.). “Focus on local issues, talk to voters — make what matters to them the focus.”