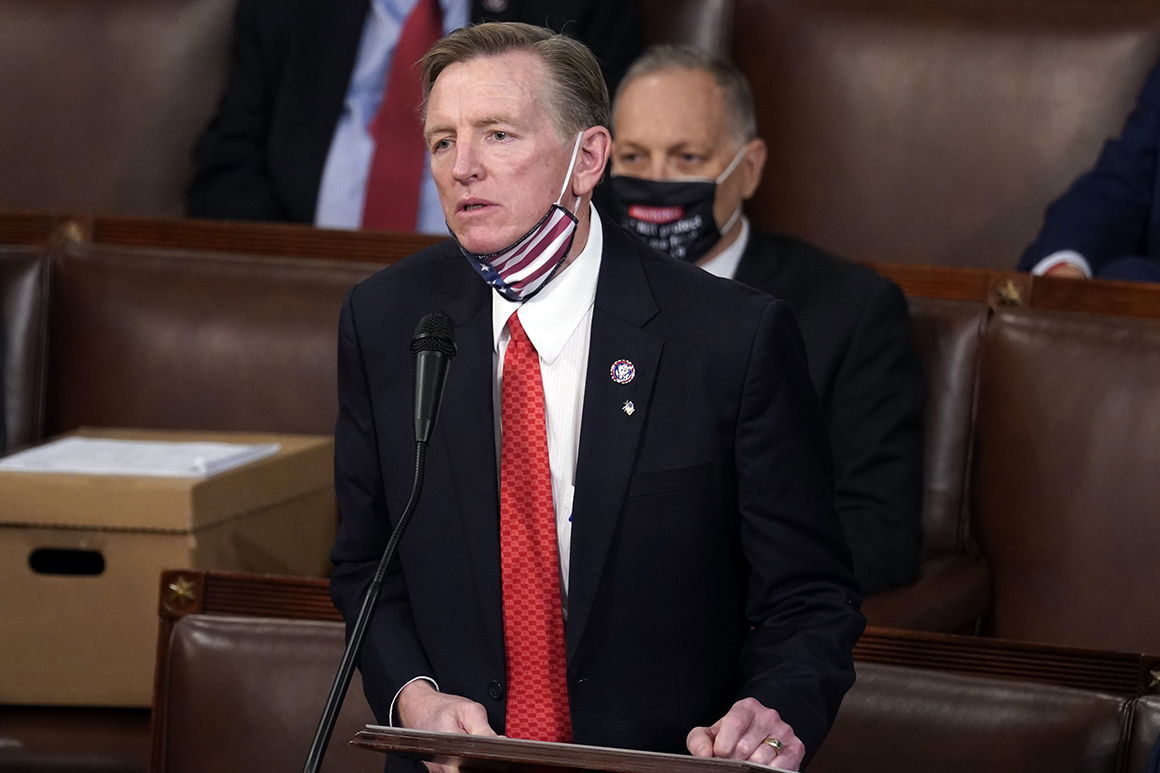 The House is set to censure Rep. Paul Gosar and boot him from his committees Wednesday over a violent social media post, representing a rare rebuke of a colleague that Speaker Nancy Pelosi deemed an “emergency.”

Censures are uncommon in the House, with the last formal admonishment of a member in this manner occurring more than a decade ago. But Pelosi and Democratic leaders moved quickly toward the punishment after Gosar posted an anime video last week that depicted him killing Rep. Alexandria Ocasio-Cortez and attacking President Joe Biden.

“Violence against women, workplace harassment, legal matters in terms of threatening a member and threatening the president of the United States,” Pelosi said. “We have to address it immediately … it’s outrageous on the part of the Republican leadership not to act upon this.”

While censure itself is rare, this is just the latest episode in the clash between House Democrats and Republican leaders on how best to respond to the more extreme members of the GOP — a problem that continues to resurface, particularly since the attack on the Capitol on Jan. 6.

The resolution will censure Gosar and remove him from both the House Oversight and Natural Resources committees. Ocasio-Cortez is also a member of the Oversight Committee.

House Republican leadership has not taken action against Gosar. The Arizona Republican deleted the video and issued a statement explaining his rationale, but not apologizing, following a call from Minority Leader Kevin McCarthy.

A spokesperson for McCarthy said Tuesday the GOP leader opposes efforts by Democrats to punish Gosar. House Republican leadership is recommending a “no” vote Wednesday afternoon. A whip notice sent to House Republican offices said the GOP had already settled the issue after Gosar took down the video and issued his statement. The note also said Democrats were setting a “damaging precedent.”

Gosar’s posting of the video further inflamed tensions between Democrats and Republicans and exacerbated Democratic fears about rhetoric spurring more violence across the country. The Capitol Police say threats against members of Congress have spiked this year in the aftermath of the Jan. 6 attack on the Capitol.

“It threatens members of Congress, but if we allow him to get away with it, anybody can be threatened,” said Rep. Gregory Meeks (D-N.Y.). “It also is a lightning rod to individuals who are crazy enough to try to carry something out — it gives the message that this would be OK.”

Party relations in the House have hit new lows over disputes that range from mask mandates in the chamber to Republican lawmakers trying to shrug off the Jan. 6 attack on the Capitol.

Although some of those divisions — such as the mask mandate — have mainly been used as culture war targets to rile up a political base, other strife has had further-reaching and more dangerous consequences. Some hard-line House Republicans have called for members of their party who voted for the infrastructure package to face punishment and removal from their committees.

Since then, some of the 13 House Republicans who voted for the package have received death threats amid the backlash from the party’s right flank.

Wednesday’s vote is the second time this year House Democrats have led an effort to punish a GOP member of Congress. Earlier this year, the House voted to remove Rep. Marjorie Taylor Greene (R-Ga.) from her committees for her incendiary rhetoric and espousing of conspiracy theories.

Eleven Republicans voted to strip Greene of her committees, but few GOP lawmakers were expected to vote to punish Gosar Wednesday. Reps. Adam Kinzinger (R-Ill.) and Liz Cheney (R-Wyo.), who have been outspoken in criticizing the more extreme members of their party, have said they will support censuring Gosar.

House Democrats have largely shrugged off Republican warnings that they might take similar actions against Democratic lawmakers if the GOP takes the majority. Democrats see Gosar as an extreme example.

“If Democrats do something as egregious as Mr. Gosar they ought to be censured about it,” said House Majority Leader Steny Hoyer in a brief interview. “This is not a partisan issue. This is an issue about safety. Not inciting violence and acting in a way that is consistent with what the House ought to expect. Mr. Gosar did not do that.”

Censures are a rare and unique action in the House. It was last successfully used against then-Rep. Charlie Rangel (D-N.Y.) in 2010 for misusing federal resources, filing inaccurate financial disclosure forms and failing to pay taxes on a rental property in the Dominican Republic. Only 23 members have ever been censured in the House.

If the censure resolution passes by a simple majority, the punishment generally involves the member standing in the well of the House chamber to receive the rebuke from their colleagues. Republican-led attempts to censure House Democrats over the last two years fizzled after they failed to garner enough votes in the House.

“Censure should not be frivolous. This is a 10-year gap [from] the last time we did censure. I don’t like having the responsibility of punishing members,” said Rep. Sheila Jackson Lee (D-Texas).

“But what struck me was the reckless lack of consideration of what the remarks through a video would do in terms of the safety and security of the president of the United States and a member of Congress,” Jackson Lee said.