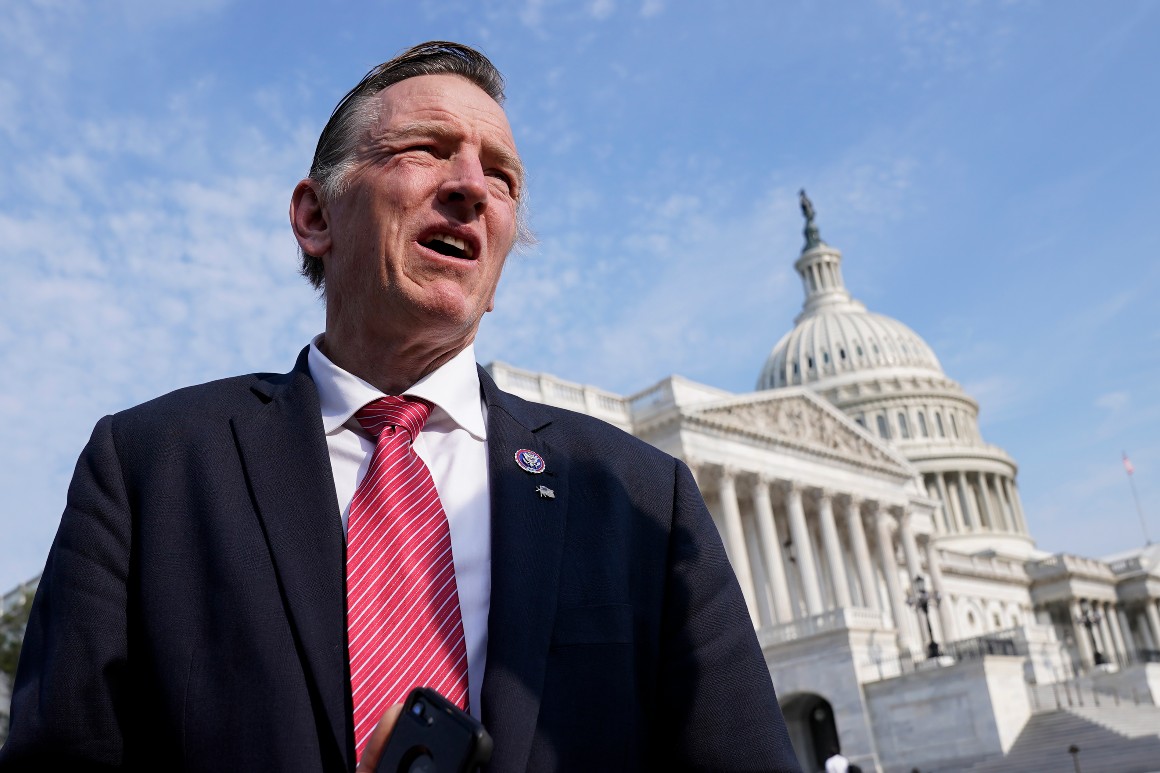 The resolution will also yank Gosar off both of his committees, which include the House Oversight Committee and the House Natural Resources Committee. He serves on the Oversight panel alongside Ocasio-Cortez.

Ocasio-Cortez said while she believes members who threaten their colleagues should face the most severe consequences, including expulsion, she approved of the move to censure Gosar.

“Threatening the life of a colleague is grounds for expulsion,” the New York Democrat said. “But given the Republican Party — especially the leader — is too cowardly to really enforce any standard of conduct … censure and committee removal is the next most appropriate step.”

The swift action from Speaker Nancy Pelosi and her leadership team comes after Gosar was criticized by both Democrats and some Republicans for his violent anime-style video. Gosar later deleted the tweet containing the video and issued a tepid statement that explained his rationale but did not apologize. That explanation followed a call from House Minority Leader Kevin McCarthy.

But House Democrats returned from recess this week demanding further action against the far-right Republican. Democratic leaders publicly called on McCarthy to take action on his own — including pulling Gosar off of his committees — but moved ahead with the censure resolution when it became apparent that wouldn’t happen. A spokesperson for McCarthy says the GOP leader opposes efforts by Democrats to punish Gosar.

The move immediately sparked cries of overreach from Republicans, but Democrats said the punishment is warranted given the violent nature of the video, in which a cartoon version of Gosar killed Ocasio-Cortez and then swung swords at Biden.

House Majority Leader Steny Hoyer said he hadn’t seen action that was so “vile, hateful, outrageous, dangerous and inciting to violence against a colleague” in his 40 years in the House.

“This may be a criminal act as well as an act that certainly brings dishonor to the House of Representatives,” Hoyer continued. “That we would get to this low level of actions with colleagues, it’s totally unacceptable, and action must be taken.”

It’s unclear how many Republicans will back the censure measure, although at least a few are expected to support it, including Rep. Liz Cheney (R-Wyo.), who has been outspoken about the more extreme members of her party.

Rep. Adam Kinzinger (R-Ill.), another prominent Republican critic of the far-right, on Tuesday said he supports the censure.

“We have to hold Members accountable who incite or glorify violence, who spread and perpetuate dangerous conspiracies,” Kinzinger tweeted. “The failure to do so will take us one step closer to this fantasized violence becoming real.”

Democrats say action must be taken both to immediately punish Gosar and to set an example for the future, particularly as lawmakers in both parties face a swell of violent threats. Many have had to resort to hiring security just to stay safe.

The political environment in Washington has been polarized for years, but relations between the two parties, particularly in the House, have almost entirely broken down after the attack on the Capitol on Jan. 6. The deep-running distrust has even infiltrated the Republican Conference as some GOP lawmakers publicly blasted their own colleagues for backing a bipartisan infrastructure bill earlier this month.

The 13 Republicans who backed the infrastructure bill then endured a wave of violent threats against their lives, many of which were encouraged by some of the most extreme members of their own conference.

This isn’t the first tug-of-war between Pelosi and McCarthy over Republican members this year. The House voted in February to strip freshman Rep. Marjorie Taylor Greene (R-Ga.) of her two committee assignments over controversial remarks she made before arriving to Congress. Eleven Republicans joined Democrats in voting to remove her.

Still, some Republicans were quick to argue the censure resolution against Gosar is another blatant overstep by Democrats, who are choosing to unilaterally punish a member of the minority party. It’s a precedent they are noting closely in the event they win the majority next year.

“I do not understand why the House can vote to remove Republicans from committees for wrongdoing but not Democrats,” said Rep. James Comer (R-Ky.), the top Republican on the House Oversight Committee.

In recent years the House has voted down Republican attempts to censure Reps. Maxine Waters (D-Calif.) and Adam Schiff (D-Calif.) and avoided a Democratic effort to censure former Iowa Republican Steve King, sending his case to the House Ethics Committee instead. The last member to be formally censured was New York Democrat Charles Rangel in 2010 after an ethics investigation concluded that he had committed an array of financial misdeeds.

A total of 23 members have been censured in the House for misconduct ranging from assaulting other lawmakers to using insulting language. More recent censures have stemmed from behavior such as sexual misconduct, financial improprieties and payroll fraud.

During a closed-door meeting on Tuesday, McCarthy sought to argue that Republicans are being held to a different standard than Democratic members. He told members they shouldn’t vote against Gosar because Pelosi and Democrats haven’t policed their own members for remarks that have come under scrutiny for being anti-Semitic or seen as encouraging violence.

In Gosar’s case, even some of his unlikely defenders in the GOP oppose Democrats’ move. Centrist members say he has taken responsibility for the inappropriate action by removing the post and issuing a statement that said he did not intend to encourage any violence against the two prominent Democrats.

“He apologized,” McCarthy said Tuesday morning when asked about the possibility of the censure vote.

The Arizona Republican has a history of making controversial decisions in what he claims is an effort to reach out to younger voters. In February, Gosar attended a white nationalist conference alongside an organizer who had pushed racist rhetoric, including calling for protection of “the white demographic core,” much to the horror of his colleagues.

Gosar denounced “white racism” and later tried to distance himself from the group, telling The Washington Post at the time that he was trying to connect with new voters. Yet he wouldn’t condemn the organizer, Nick Fuentes, when asked.

Gosar has also continually spread conspiracy theories about the deadly white-nationalist rally in Charlottesville in 2017 and the Jan. 6 attack on the Capitol, calling the rioters “peaceful patriots” and “political prisoners.”