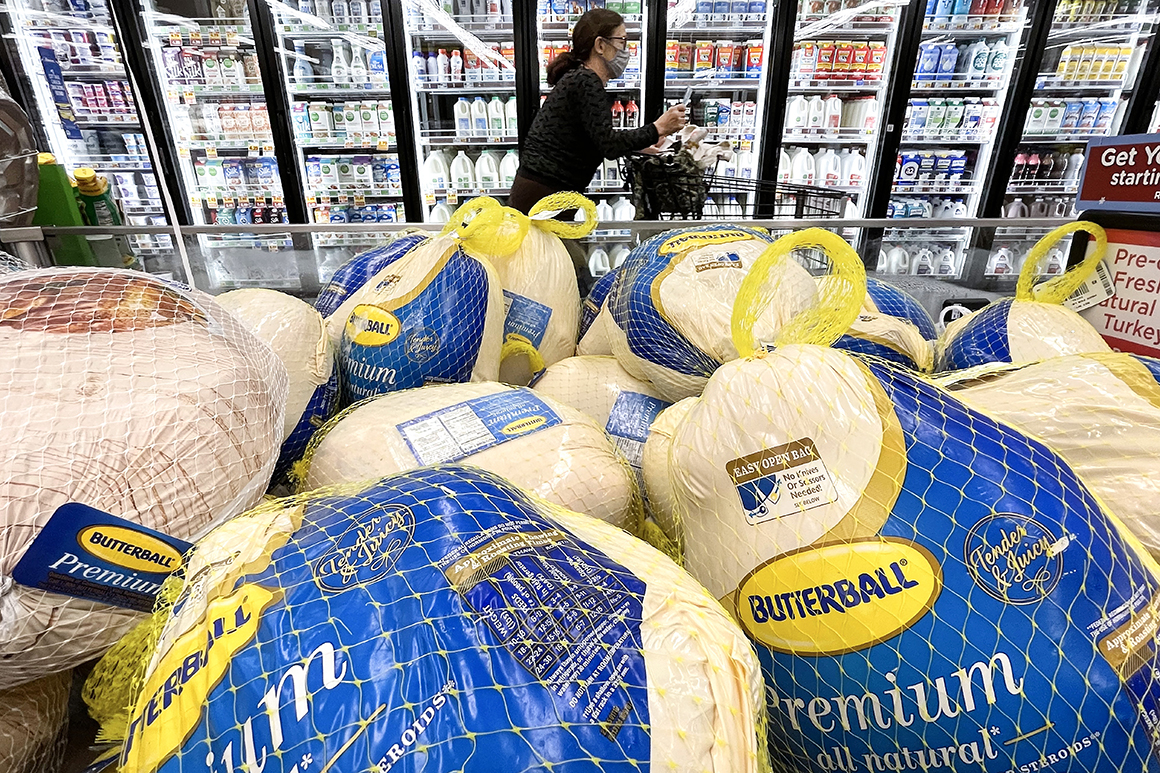 The president’s own USDA says all Thanksgiving staples are up a combined 5 percent this year. Lawmakers are deploying even higher estimates to strike at the heart of Democrats’ agenda — a push to funnel trillions of dollars more into a hot economy.

“Everything from turkeys to baked goods are costing families more and this Thanksgiving dinner could be one of the most expensive yet,” Daines said.

No matter that some of the eye-popping data is tied to a rebound from last year, when the pandemic canceled countless Thanksgiving gatherings and sent prices tumbling. And some of today’s rising food prices have more to do with labor shortages and rare supply-chain snarls — not money that will flow into the economy over the years ahead.

But the troubles have backed the White House into a messaging mess as it tries to avoid repeating its missteps about food prices from earlier in the year. White House officials have been slow to formulate an effective counterattack, relying largely — until recently — on the argument that price spikes are temporary. Biden this week finally addressed the issue directly, telling Americans that administration efforts to unclog ports and cut gas prices would ensure they’d have enough food on their Thanksgiving tables.

Still, weeks of stories about rising prices are offering Republicans potent ammunition as they try to sink the $1.7 trillion climate and social spending bill that cleared the house last week, which is likely Democrats’ best chance at a major policy achievement ahead of midterm elections next year. The attacks could be especially effective at peeling off the votes of vulnerable Democrats in the Senate.

Republicans are “very good at generating scare tactics and distributing them and propagating them with great success,” said Rep. Dean Phillips (D-Minn.). Democrats shouldn’t help them by looking like they’re not taking inflation seriously, he argued. Phillips, who described the White House’s early response to inflation as “one of ignorance,” praised what he said was a “dramatic shift” in recent messaging to “one of relevance.”

Biden officials admit their past messaging on inflation, especially food prices, sometimes missed the mark. One White House post this summer touted the cost of a Fourth of July cookout decreasing 16 cents from the year before. Biden’s team was widely criticized for the misleading post, based on a survey from the Farm Bureau, a farm lobbying group, rather than USDA data, as meat, gas and other prices soared.

Now, even as the administration is making some progress on food supplies and prices, it’s being drowned out by alarming media reports about hyper-inflated food prices based on findings from groups like the Farm Bureau rather than government data, a White House official told POLITICO. It’s a precedent the White House itself helped create, the person said. “We sort of did that to ourselves,” the official added.

Republicans seized on a Farm Bureau claim that Thanksgiving food prices were up a combined 14 percent, with turkeys up a whopping 24 percent — even though the lobbying group acknowledged that the price of turkeys had dropped since it collected data in early November.

“They don’t have a plan,” Rick Scott (R-Fla.), who heads the Senate’s reelection arm, said at a press conference Republicans held last week to hammer Democrats on holiday food prices.

Ahead of Thanksgiving, Biden administration officials feel like they’re on a better track. “We understand it’s a problem that consumers are facing and American families are frustrated by it,” a second White House official said.

On Tuesday, Biden acknowledged that “moms and dads are worried, asking, ‘Will there be enough food we can afford to buy for the holidays?’” Some of the strain is easing, in part, because of his work to increase capacity at several ports, Biden said.

“Families can rest easy” because stores will be “well-stocked with turkey and everything else you need for Thanksgiving,” Biden said.

While some food shortages remain, a National Turkey Federation spokesperson told POLITICO the group expects an ample supply of turkeys in stores for the holiday. Walmart, the nation’s largest grocery chain, and Target now say their shelves will be fully stocked for the holidays.

Biden on Tuesday also announced an effort that could drive down energy prices, which are major costs for farmers and food processors. White House officials who monitor the supply chain and inflation say lowering energy prices is one of the few ways they can reduce Americans’ higher grocery bills.

“The President is fighting every day to lower inflation, by strengthening our supply chains, acting to lower fuel costs, and passing his Build Back Better Act that will be a game changer for the middle class,” White House assistant press secretary Emilie Simons said in a statement, referring to the social spending bill.

Meanwhile, Republicans are still pointing to food prices as they push back on Democrats’ social spending bill.

John Thune, the No. 2 Republican in the Senate, argued last week at the GOP press conference on Thanksgiving prices that the “best way” to address rising food inflation “is to stop this reckless tax and spending spree dead in its tracks.”

Thune said he hoped “some Democrats” would come to that conclusion and “be willing to work with us to make that happen.”

He didn’t mention moderate Democratic Sen. Joe Manchin of West Virginia by name, but Manchin himself has cited rising inflation as a reason for Democrats not to rush the bill. The White House argues the legislation will only help ease inflation since it will lower health care and child care costs for Americans while expanding the child tax credit for families to help cover rising prices.

Republicans see the issue carrying into next year ahead of the midterms.

“It’s not just Joe Manchin, it’s also Mark Kelly and Maggie Hassan and Raphael Warnock,” a senior GOP aide told POLITICO, noting three Democratic senators with tough 2022 reelection bids ahead of them. “As long as inflation remains salient, they’re going to have to defend to their constituents why inflation won’t be made worse by spending trillions more dollars.”