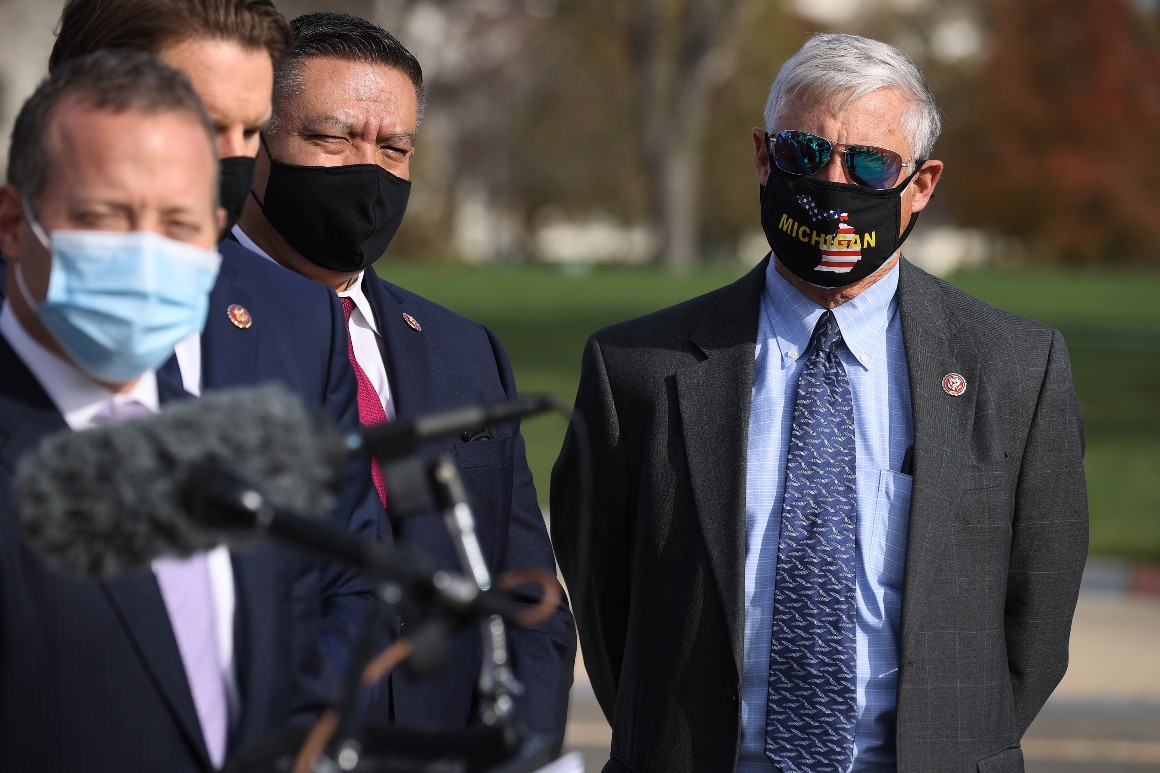 And now, it would seem, the Republican Party is against bridges and roads.

The ferocity of the reaction against the 13 House members who voted with Democrats on the House-passed infrastructure bill appeared to signal a new stage in the party’s evolution, marking the GOP as so reflexively anti-Biden that even spending on infrastructure — an issue that Donald Trump once obsessed over as president — is too radioactive to support.

It’s a hardening of the party that’s already shaping its approach to the midterms, ensuring not only that Republicans up and down the ballot will be running against the sitting president, but that they will not support anything that might help Biden improve his sunken public approval ratings in the interim.

And they’ll punish any moderate Republicans who do.

“That’s the way the place works now,” said former Rep. Tom Davis, a Virginia Republican who served as National Republican Congressional Committee chair. “That’s what we have devolved to.”

In the days since the House vote, the 13 Republicans who voted with Democrats for spending on roads and bridges — once among the driest, most bipartisan exercises on the Hill — have been savaged by Trump and his allies, who called the defectors “traitors” and suggested they could be stripped of their committee assignments.

At least one of them, Rep. Fred Upton of Michigan, said he received “nasty” death threats – which hardly stopped his Trump-endorsed primary opponent, Michigan state Rep. Steve Carra, from piling on.

“This man stabbed Donald Trump in the back,” Carra wrote in a fundraising appeal on Tuesday. “Let’s crush him.”

Some of the backlash against the 13 was fanned by their colleagues. One of them, Rep. Marjorie Taylor Greene (R-Ga.), tweeted out office phone numbers of the wayward Republicans.

Rep. Madison Cawthorn (R-N.C) threatened retribution. “Vote for this infrastructure bill and I will primary the hell out of you,” he wrote.

“Some elements of the party,” said Ed Rogers, the veteran Republican lobbyist and strategist, “keep finding new ways to define Republicanism: ‘Do you think Trump won the election? Do you think everyone who voted for the infrastructure package is a sellout and has done great harm to flag and country?’”

He said, “I hope it’s a fever that will break.”

It appeared possible last week that the GOP’s fixation on Trump might at least have loosened. Republican Glenn Youngkin, who kept Trump at a distance from the governors’ race in Virginia, proved Republicans could pull back suburban and independent voters who had defected from Trump, while also out-performing Trump with his rural base. Republicans needed Trump’s supporters, but for the first time it seemed possible they might not need the former president himself.

But the eruption over infrastructure laid bare how quickly Trump could reassert himself — and impose new litmus tests — on the party. As the GOP looks to expand on its victories from last week ahead of the midterms next year, it is simultaneously shrinking into a concentrated and more Trumpified version of itself, leaving less room than ever for the few centrist Republicans who survived Trump’s presidency.

Glen Bolger, the longtime Republican pollster, said that in a general election, the 13 Republicans who voted for an infrastructure bill may be able to tell their constituents that they delivered on priorities like fixing roads and bridges. But that assumes they make it that far.

“They’ve put themselves at risk because they’re inviting primary challenges,” Bolger said. “In a lot of those districts, it is a positive in a general election. But if you don’t survive the primary, you don’t make it to the general.”

In another era, the uproar over infrastructure would have been unheard of.

The influence of businesses that rely on infrastructure — and that once were a central part of the GOP’s fundraising base — has provided an incentive for Republicans to support public works, and Republicans have traditionally been sensitive to appeals about the jobs that infrastructure spending can create or sustain. It was President Dwight Eisenhower, a Republican, whose administration built the interstate highway system. In the 1980s, more than 100 Republican House members voted to increase the gas tax to fund highway and mass transit improvements, a measure Ronald Reagan signed into law. And Trump, as a candidate for president, proposed a nearly $1 trillion infrastructure plan.

For a House member from a swing district, Davis said, “this makes all the sense in the world.”

But Republicans also have an interest in denying Biden, whose public approval ratings have been tumbling, anything resembling a victory. And Davis predicted that in primaries, some House Republicans who voted for the bill “are going to take a hit. … The people who watch Fox and Breitbart and that kind of stuff, they’re going to have a negative view of this.”

“I wonder if it was a thoughtful analysis that this bill has too much spending,” said Tom Campbell, a former California Republican congressman and Reagan administration staffer who began collecting registrations last year for his new party, the Common Sense Party. “If so, I’d respect it much more. But I don’t think it was. I think it was much more, ‘Let’s make the Democrats fail.’”

Bill McCoshen, a Wisconsin-based Republican strategist, said that if the House had moved on the bill when the Senate passed it with bipartisan support in August, it is possible more House Republicans would have signed on.

“But once it became a problem for Democrats because they couldn’t get it done,” he said, “I’m surprised they got any Republican votes … Especially after Virginia and the closeness of New Jersey, they could have made [Biden] a lame-duck president this year.”

It’s possible that the infrastructure rallying cry will fade. Just four of the 13 Republicans who voted for the infrastructure bill were among those who more gravely crossed Trump by voting for his impeachment, and two of them, Reps. Adam Kinzinger of Illinois and Anthony Gonzalez of Ohio aren’t seeking reelection next year. If last week’s elections were any indication, cultural issues are likely to animate the electorate next year far more than public works.

One Republican strategist working on House campaigns said the risk to those incumbents is minimal in part because, except in extreme cases, most heavy-spending super PACs will be reluctant to support efforts to primary them.

“Even if they hate them, they know it’s a better use of their money to play in an open Republican primary, and most of the moderates know that,” the strategist said. “So, they know all they have to do is endure a few weeks of saber rattling.”

The defectors who voted for the infrastructure bill may benefit, too, from support from state and local Republican Party officials who have been clamoring for infrastructure money for years. The funding priorities included in the bill last week are more mundane — and far less controversial — than the money for high-speed rail that some Republican governors rejected during former President Barack Obama’s first term.

“That was narrow,” Rogers said. “This is much more discretionary, a lot more you can do with it.”

Republicans may continue to complain about the bill. But Rogers predicted, “Everybody’s going to be at the ribbon cuttings.”