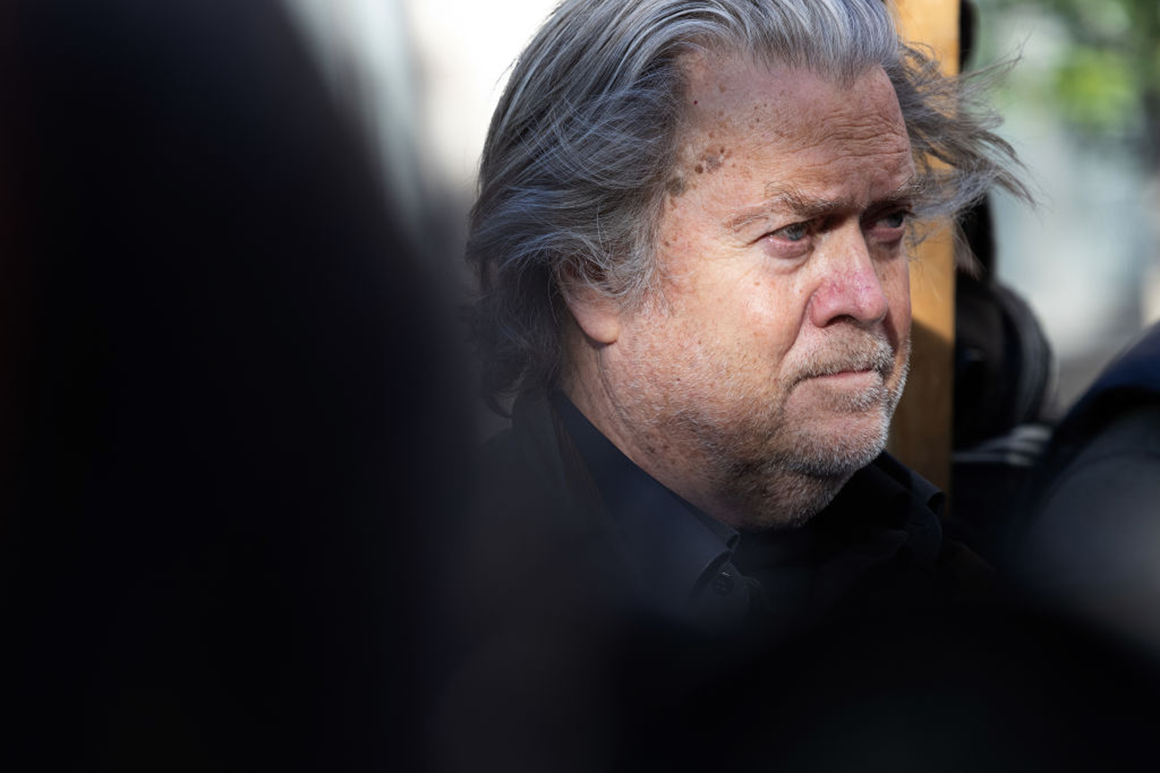 In 2008, a little-known Justice Department attorney stepped into a courtroom to argue that top aides to then-President George W. Bush could simply ignore congressional subpoenas.

“You have to recognize the absolute immunity of the president’s close advisers,” the attorney, Carl Nichols, declared.

Today, Nichols is the federal judge set to preside over the criminal case of Steve Bannon, former President Donald Trump’s ally who — like Bush’s aides — claims he doesn’t have to comply with a subpoena to testify about his efforts to help Trump overturn the 2020 election.

It’s a remarkable symmetry for the mild-mannered, longtime corporate lawyer, who now finds himself at the helm of one of the most important clashes between Congress and Trump — the man who put him on the federal bench in 2019. The Bannon case holds implications for the future of congressional investigations and for efforts to expose the secrets of those who stoked the Jan. 6 attack on the Capitol.

Despite his Trump-era pedigree, Nichols won’t be easy to typecast. He’s already presiding over dozens of criminal cases stemming from the Jan. 6 attack, and his rulings and sentences have largely aligned with those from the rest of the judges in the District.

Nichols hasn’t been shy about lacing into defendants for threatening the peaceful transfer of power, and he has ordered the pretrial detention of one Jan. 6 defendant, Jeffrey McKellop, a retired special forces soldier. And prosecutors have cited Nichols’ words as they’ve urged stiff sentences for some Jan. 6 defendants.

“Democracy requires the cooperation of the citizenry,” Nichols said in a recent sentencing hearing for Jan. 6 defendant Thomas Gallagher. “Protesting in the Capitol, in a manner that delays the certification of the election, throws our entire system of government into disarray, and it undermines the stability of our society.”

Nichols is also presiding over a series of civil defamation suits that voting equipment maker Dominion filed against pro-Trump figures such as Rudy Giuliani, Sidney Powell and Mike Lindell over their propagation of alleged falsehoods about the company facilitating voter fraud.

Trump has made clear that he expects judges he appointed to rule consistently in favor of him and his political allies, but Nichols is among those who have not done so. Giuliani, Powell, Lindell and others argued that their statements about Dominion were legally protected as part of the rough and tumble of politics, but in an August ruling, Nichols emphatically disagreed and ordered that the suits could continue to fact-finding.

“There is no blanket immunity for statements that are ‘political’ in nature,” Nichols wrote. “It is true that courts recognize the value in some level of ‘imaginative expression’ or ‘rhetorical hyperbole’ in our public debate. … But it is simply not the law that provably false statements cannot be actionable if made in the context of an election.”

Trump nominated Nichols to the U.S. District Court for the District of Columbia in 2018, and he was confirmed by a 55-43 vote of the Senate in June 2019. All Republicans and three Democrats — Joe Manchin of West Virginia, Kyrsten Sinema of Arizona and Doug Jones of Alabama — supported the nomination.

One of Nichols’ former courtroom adversaries told POLITICO the judge’s history with the Bush case should lead him to recuse from the Bannon matter. It’s unclear whether the judge will address this at a Thursday hearing — his first in the Bannon case — where he also may confront questions about a potential gag order.

Under a grand jury indictment returned last week, Bannon faces two misdemeanor counts of “contempt of Congress” for his outright refusal to appear under subpoena and to provide documents to the House’s Jan. 6 select committee. Bannon’s attorney at the time, Robert Costello, said Bannon was immune from appearing because of his relationship as an adviser to Trump. But Bannon’s claim represented an extreme — and legally shaky — view of his ability to ignore a congressional subpoena.

Although the Justice Department has long asserted the right of presidential advisers to claim “absolute immunity” from testifying to Congress — itself a legally tenuous position — those claims have typically been reserved for a small set of top White House advisers, not outsiders with no official responsibilities.

The Jan. 6 committee is hopeful that criminal charges against Bannon, brought just three weeks after the House referred the case to the Justice Department, will compel other reluctant witnesses to cooperate. How Nichols approaches this case may influence that prospect.

Bannon did a quick hit for his “War Room” podcast as he was surrendering to the FBI last week and staged a news conference just outside the courthouse, where he said the criminal case against him would prove to be “hell” for President Joe Biden, Attorney General Merrick Garland and House Speaker Nancy Pelosi. Bannon seems intent on using his prominent right-wing media megaphone to portray the case against him as corrupt and political.

Nichols — a 1996 University of Chicago Law School graduate — clerked for appeals court Judge Laurence Silberman and Supreme Court Justice Clarence Thomas before a lengthy career in private practice, interrupted only by his five-year stint at the Justice Department.

But Nichols’ history with the Bush case — when then-chief of staff Joshua Bolten and former White House Counsel Harriet Miers claimed they were “immune” from testifying to Congress about Bush’s dismissal of eight U.S. attorneys — looms largest over the Bannon prosecution.

Representing Bolten and Miers on behalf of the Bush White House, Nichols argued that Congress’ need for testimony from witnesses just isn’t as acute as that of, say, the courts.

Ultimately, Nichols lost the case before U.S. District Court Judge John Bates, who ruled that presidential advisers must show up when subpoenaed by Congress. The Justice Department appealed the decision but, after Barack Obama won the presidency, the House, Bush lawyers and the new administration reached a deal and dropped the litigation over the matter.

Bates’ ruling isn’t binding on other courts, but remains one of only a couple ever to address the notion of immunity for presidential advisers.

Despite Nichols’ broad argument for the immunity of top presidential advisers, it’s not nearly as extreme as Bannon’s. Nichols told the court, for example, that congressional subpoenas for documents could still be litigated. Bannon, notably, refused to comply with a committee document request.

And Nichols emphasized that the notion of “absolute immunity” was meant to apply only to a “small group” of close presidential advisers, like the chief of staff or White House counsel.

“We are not seeking carte blanche to have absolute immunity for anyone who’s in the White House,” Nichols argued at the time.

Bannon, who had been out of the White House for years by the time of the Jan. 6 Capitol riot, would clearly fall outside the boundaries of that analysis.

Nichols’ rival counsel in the Miers-Bolten case, former House counsel Irving Nathan, offered praise for his opponent this week, but said Nichols might want to pass the Bannon case to one of his colleagues.

“Carl Nichols was a thoroughly professional, highly competent and courteous adversary in the Harriet Miers case,” Nathan told POLITICO in an email. “I have not followed his career as a District Court judge, but I expect that he is fair, impartial and a strict adherent to the law on the bench. Nevertheless, for the sake of the appearance of impartiality, I believe he should consider recusing himself from the Bannon case. The issues are too similar to the Miers case.”

“I recognize that he was then simply arguing the position of the Bush Administration and the then-DOJ. And most of his arguments were about procedural issues in a civil context which are not present in this criminal case,” Nathan continued. “But ultimately he argued that a witness, a private citizen (a former Executive branch official) following the direction of a President, need not comply with a Congressional subpoena and could refuse even to show up, produce any documents or even itemize the documents alleged to be privileged.”

Nathan’s successor as House counsel, Kerry Kircher, said that he understood the concerns about “appearance of conflict” but that he didn’t believe judicial ethics would require Nichols to recuse.

“As a general proposition, I do not think a position an attorney has advocated as an attorney… creates a conflict of interest if that attorney later serves as a judge and is faced with a case that presents the issue on which he earlier advocated,” Kircher said.

Democratic senators pressed Nichols precisely about the Bush case during confirmation proceedings in 2019. In a written questionnaire, Sen. Mazie Hirono (D-Hawaii) asked whether Nichols continued to hold “these expansive views of executive powers.”

“As a litigator representing the Executive Branch in those cases, I vigorously defended my clients’ interests and the policy decisions made by other, more senior Executive Branch employees, but was not responsible for those policy decisions,” Nichols responded. “If I am confirmed, I will not be a litigator representing a party, but a judge whose obligation is to decide cases fairly, based on existing law and relevant precedent.”