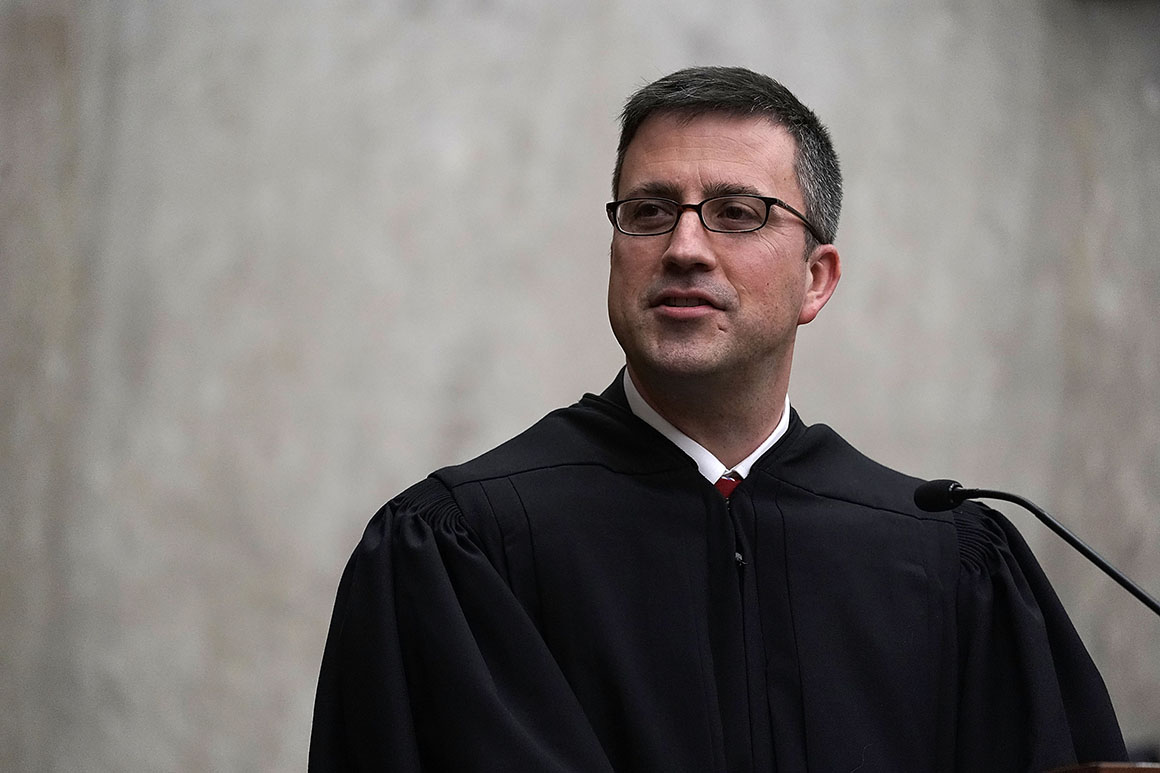 A federal judge poised to rule on former President Donald Trump’s effort to block Congress from obtaining his tax returns expressed skepticism Tuesday about the Justice Department’s abrupt reversal in the case after Trump left office.

U.S. District Court Judge Trevor McFadden suggested it was strange that last July — about six months after President Joe Biden was sworn in — the Justice Department concluded the Treasury Department was legally obligated to turn over Trump’s tax returns to the House.

That opinion reversed one DOJ issued in 2019 authorizing the Treasury Department to withhold the returns.

McFadden, a Trump appointee, implied that the reversal was driven by politics and he said the new stance might dictate that Congress could be entitled not only to Biden’s returns — which have already been made public — but even the taxes filed by Biden’s son Hunter.

“I mean, if Congress changes hands in a couple years here and a Republican chairman of the House Ways and Means Committee asked for Hunter Biden’s tax returns, are [you] just going to say, ‘Oh sure, we’ve got to defer to Congress. They’ve said they’re interested in legislating on the presidential family. We’ve got to turn them over.’ Is that going to be the administration’s position?” the judge said.

McFadden’s comments were the latest twist in a yearslong effort by the House to obtain Trump’s tax returns. After Biden took office, DOJ negotiated with the House and agreed to drop its objection to the House Ways and Means Committee’s bid for the documents. But DOJ agreed to continue litigating the case before handing the returns to the Democratic-led panel.

“You speak for the United States, though,” the judge replied.

House General Counsel Douglas Letter suggested that politics and personal fealty to the president may have been at work in the 2019 memo — crafted by DOJ’s Office of Legal Counsel — not the recent revision.

“The prior OLC [Office of Legal Counsel] opinion was issued when Mr. Trump was the boss of OLC,” Letter noted.

However, McFadden, a Trump appointee, also said the new position staked out by the Justice Department’s Office of Legal Counsel was out of line with the robust view of executive power that office has traditionally upheld. He predicted it would be short-lived.

“I was struck by how deferential the 2021 OLC opinion is to Congress. OLC is not known for being deferential to anybody other than the president,” McFadden said. “I just have a hard time believing you are going to keep that view for other than this one request.”

For more than three hours on Tuesday, McFadden pressed and prodded House and Justice Department attorneys about their arguments for obtaining Trump’s tax returns and whether — now that Trump has left office — there are any separation of powers concerns remaining to justify blocking the IRS from providing them to lawmakers.

Throughout the hearing, McFadden questioned the attorneys on how heavily to weigh Trump’s concerns that Democratic lawmakers were seeking to obtain his tax returns for political reasons. He also wondered whether Congress’ demand for tax returns could be used as a “stick over future presidents” who could be forced to “play nicely with Congress or Congress will expose your tax returns.”

But Letter said both concerns were meritless, noting that every modern president other than Trump had willingly released tax returns.

“That burden has to be minimal given that all the other presidents don’t think this is a burden or something that has to be worried about,” Letter said.

McFadden seemed to be leaning in favor of the Justice Department’s request to end the lawsuit, although at times he said he wasn’t sure that it was at the right procedural stage to do that.

The judge suggested some of Trump’s claims might survive the House’s effort to dismiss the suit and prompt another round of litigation, perhaps after fact-finding, but McFadden also seemed unenthusiastic about refereeing an inquiry into House Ways and Means Committee Chair Richard Neal’s motives in making the request under a law specifically governing congressional access to tax records.

An attorney for Trump, Patrick Strawbridge, didn’t detail just what records would help Trump build his case, but said it wouldn’t likely require testimony from Neal or others in the House.

“We don’t intend to depose any members of Congress,” the attorney said.

However, Letter said he was mystified at the suggestion that Trump’s lawyers needed more facts to argue the case.

“I’m really not sure what Mr. Strawbridge is envisioning? Is he going to take discovery of the Office of Legal Counsel? Is he going to call in [former OLC chief] Steven Engel … and say, ‘Did anyone in the White House influence your opinion?’” Letter said.

While Strawbridge denied stalling in the case, one possibility raised by the hearing is that Trump is hoping that the litigation and ensuing appeals drag out for a year or more.

That would push the case through the next election, where Republicans are favored to win back control of the House. That would likely moot the case by replacing Neal with a Republican in the Ways and Means Committee chairperson’s post.

Trump’s lawyers argued that statements by Neal and other Democratic lawmakers show that his request is a politically-motivated vendetta that has nothing to do with potential legislation.

It’s a reversal of Trump’s own position in cases where his official acts were challenged, including travel ban orders that critics said discriminated against Muslims. In that litigation, attorneys for Trump said courts should ignore his comments in media interviews, public appearances and on the campaign trail before his election in 2016.

For its part, the Justice Department argued Tuesday that the statements allegedly shedding light on the motives of Neal and other Democrats are “legally irrelevant”

“They … belong in the realm of the political hubbub, the political chatter that the Supreme Court has said they will not look to in the face of the assertion of a valid purpose for the inquiry,” the Justice Department lawyer said.

McFadden repeatedly said he did not view the legal standard for deciding the current fight to be the Supreme Court’s muddy ruling last year on the House’s effort to use a subpoena to get a similar set of materials from Trump’s accountants at the accounting firm Mazars.

“Honestly, I think my instinct is Mazars is a bad fit for this given that President Trump is no longer president, but I’m also struggling with the alternative,” McFadden said. “I have a hard time imagining the founders thought rights would kind of trail on with you after you were no longer the office holder … My inclination … is former presidents shouldn’t count very much in that separation-of-powers analysis.”

However, the judge noted that the Supreme Court said in a 1977 case about President Richard Nixon’s papers that access to a former president’s papers could implicate executive power issues.

McFadden said he planned to rule in the next two or three weeks on the pending motion to dismiss the case.

“We are a bit in uncharted territory here with what to do with a suit like this from a former president,” the judge said.