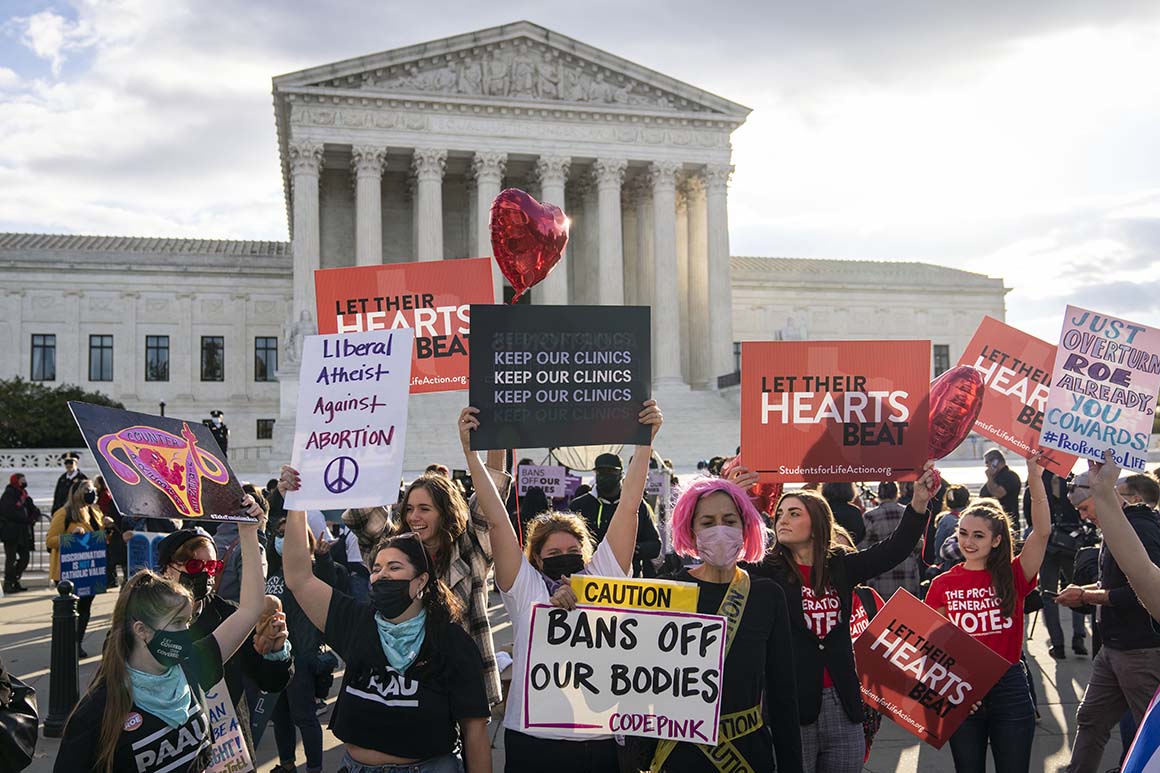 The Supreme Court wrestled Monday with the most significant abortion cases it has heard in nearly three decades, mulling the fate of a Texas law that has sharply restricted abortions in the state by opening health care workers and others to the threat of private lawsuits for facilitating the termination of a pregnancy.

Kavanaugh seemed troubled by the possibility that allowing the Texas law to remain in effect could lead other states to pass laws that would intrude on various rights protected by the Constitution — one of the key arguments the abortion clinics challenging the law put forward when asking the court to strike it down.

Kavanaugh theorized that a left-leaning state could offer a $1 million bounty against those who sell an assault rifle, like an AR-15, then claim it wasn’t using state power because only private parties could bring the suits.

Barrett, meanwhile, focused on a provision in the Texas law that limits which legal arguments alleged abortion facilitators can make to defend themselves when sued under the statute. She noted that the law seeks to block defendants from arguing to state judges that allowing members of the public to collect thousands of dollars in damages over someone’s abortion could chill others seeking to obtain or provide abortions.

“I’m wondering if, in the defensive posture in state court, the constitutional defense can be fully aired,” Barrett said.

Marc Hearron, who argued abortion clinics’ case on behalf of the Center for Reproductive Rights, agreed that the statute is so tilted against abortion providers that it justifies federal courts stepping in to block the law.

“It’s the rules that have been created by the Texas legislature that turn courts into a weapon that can be used to nullify constitutional rights,” Hearron complained.

While justices’ questions and comments during oral arguments are far from a foolproof indication of how they’ll vote on a case, even one of the court’s staunchest anti-abortion voices — Justice Clarence Thomas — seemed troubled Monday that Texas may be overreaching in its defense of the abortion ban.

Thomas sounded dubious about Texas Solicitor General Judd Stone’s claim that the law’s provisions granting damages to those who sue over abortions is “akin” to state laws that allow plaintiffs to sue for “outrage” after being exposing to a shocking event.

“Forgive me, but I don’t recall an ‘outrage’ injury. What would that be?” Thomas asked.

Stone suggested that Texas courts might narrow the statute so that only plaintiffs personally impacted in some way by an abortion could be successful in pursuing a suit. But he said the Texas courts should be left to do that without interference in advance from the federal courts.

“What’s a sufficient injury in fact is going to be something Texas courts have to develop in the first instance,” Stone said.

Throughout Monday’s arguments, Justices Samuel Alito and Neil Gorsuch were the most vocally supportive of Texas’ law and skeptical of the challenges against it, with both warning that proposed injunctions against the law threaten to upset the balance between federal and state governments.

Alito turned arguments about the unprecedented nature of the Texas law on their head, contending that the proposed response of blocking judges or clerks from acting on S.B.8 lawsuits would open the door to similar relief in other circumstances.

“I think we have to be concerned about the implications of the mechanisms that you propose … It’s unprecedented and it is contrary to our system of federal law to enjoin a state judge from even hearing a case. When has that been done and how can that be justified?”

Solicitor General of the United States Elizabeth Prelogar, arguing for the federal government, said such a response was justified by what she called the “dangerous” and unusual structure of the Texas statute.

“I recognize that this seems like a novel case and that’s because it’s a novel law,” Prelogar said. “In the history of the United States, no state has done what Texas has done here.”

The law — which has been in effect for about two months save for a handful of days when it was blocked by a lower federal court — allows private citizens to sue abortion providers or anyone who assists someone in obtaining an abortion, regardless of whether they live in Texas, know the patient terminating a pregnancy, or can prove any injury to themself from the procedure. There are no exemptions for cases of rape or incest.

People who successfully sue over an abortion in the state can win a minimum of $10,000, but those who successfully defend themselves from such a suit can claim no financial reward. And there can be limitless lawsuits filed in any Texas county over a single abortion, a factor Hearron referenced in Monday’s arguments as one reason the law creates an unconstitutional chilling effect.

“It turns the abortion provider into a permanent defendant,” Hearron said.

Several justices from across the ideological spectrum also took issue Monday with the clinics’ attempt to sue Texas state court judges and clerks to stop them from hearing cases brought against abortion providers.

Justices Stephen Breyer and Samuel Alito — who rarely agree with one another in polarizing cases — also raised potential objections to the clinics’ strategy. Breyer asked whether it could open the door to people suing judges in common tort suits, while Alito was skeptical that a judge merely hearing a case against an abortion provider makes them an agent of enforcing the state’s ban.

Hearron, the attorney arguing on behalf of abortion providers, also said allowing Texas’s law to remain in effect will allow states to ignore any federal law or constitutional protection they choose, from religious freedom to gun rights.

“At issue here is nothing less than the supremacy of federal law. S.B. 8 is an abortion prohibition, but the issues before this court are far more sweeping,” he said. “Allowing the Texas scheme to stand will provide a road map for other states to abrogate any decision of this court with which they disagree.”

Before the session Monday, those opposed to the Texas law appeared to be fighting an uphill battle since the justices, voting 5-4, passed up a chance to block the statute from taking effect on Sept. 1. Roberts joined the court’s liberals in voting to block the law, but the remainder of the court’s conservatives turned down the plea from abortion providers for an emergency injunction.

The arguments the justices heard Monday were prepared on an extraordinarily compressed schedule, coming just ten days after the court agreed to take up the cases in-person. It’s the most accelerated timeline for a Supreme Court case that actually went to arguments since December 2000, when the justices heard arguments on the 2000 election results on two days notice and decided the case the following day.

The first case the justices heard Monday was brought by abortion providers and is the same litigation the high court declined to act on two months ago. The second round of arguments Monday was on a suit the Biden administration filed in September over S.B. 8. A federal judge granted a preliminary injunction against the state in that case last month, but a federal appeals court quickly stayed that injunction.

The justices generally sounded more skeptical Monday about the federal government’s suit than the one brought by abortion providers.

While Monday’s case did not directly raise the question of whether the Texas ban is unconstitutional under Roe v. Wade or other longstanding abortion precedents — or whether those precedents themselves should stand — there were multiple references to a separate Mississippi case the court will take up in December that could result in Roe being overturned. Multiple justices wondered aloud during the arguments on the Texas case if the pending threat to Roe was creating a chilling effect on the provision of abortion above and beyond Texas’ statute.

Additionally, any ruling the high court issues based on Monday’s arguments may not be the final word on the Texas law.

Even if the justices turn aside both the challenges that are before them now, separate litigation stemming from a suit filed directly by someone seeking to enforce the Texas law and collect a money judgment from a person who facilitated what the law deems an illegal abortion could eventually reach the Supreme Court.

That kind of a case would likely face fewer of the procedural objections lawyers for Texas and anti-abortion activists are using to try to shoot down the current challenges. But it could also take months or more than a year to wend its way back to the Supreme Court.

In the meantime, the threat of financial liability would likely continue to dramatically curtail the availability of abortion in Texas — a scenario which the law’s authors have acknowledged is its very purpose.