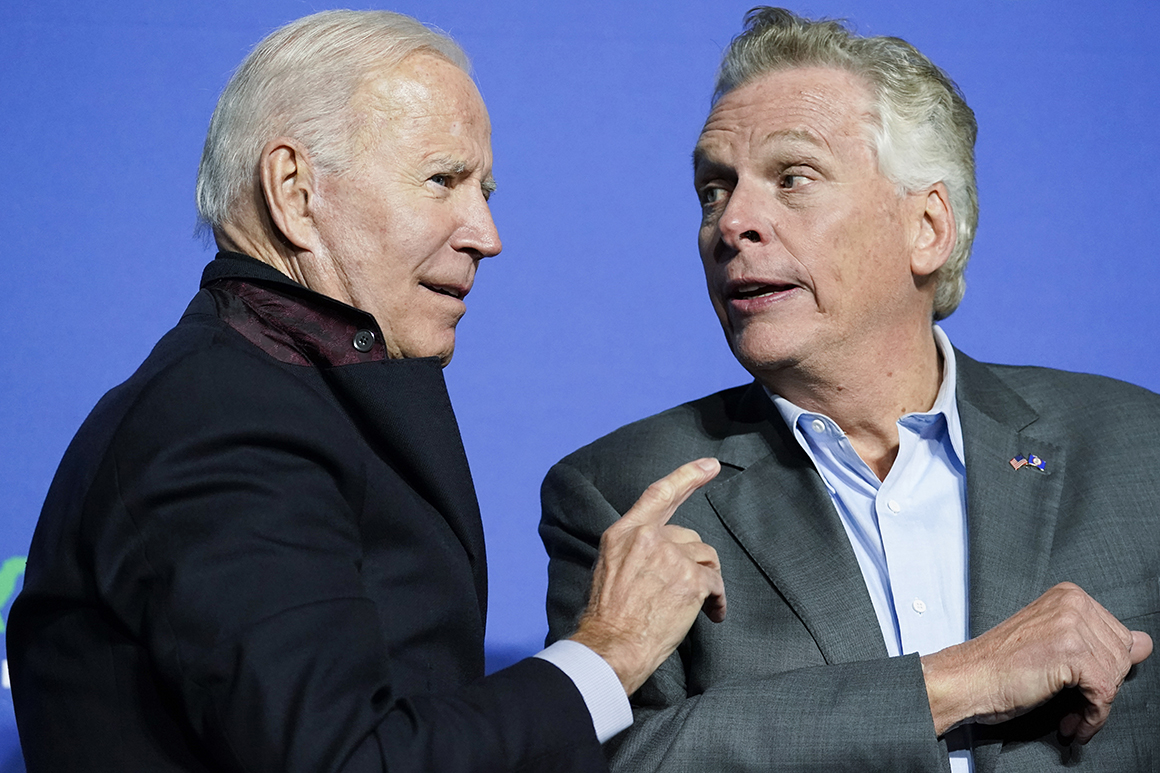 The sharp swing away from Democrats last week in Virginia and New Jersey has the party newly alarmed about even more vulnerable governorships across the country next year.

President Joe Biden’s sinking approval rating in Virginia was one of the factors that helped doom former Democratic Gov. Terry McAuliffe, strategists on both sides of the aisle say, something that could materialize in 2022 if the political environment does not change.

Even in gubernatorial races — in which candidates generally do a better job at separating themselves from national party dynamics than in federal races — negative views of the president present a huge problem for a slate of Democratic incumbents up next year. That’s especially true after many tied themselves closely to Biden during his 2020 campaign and the first six months of his presidency.

Democrats hold the governorship in eight states up in 2022 that are less or similarly favorable than Virginia — Kansas, Maine, Michigan, Minnesota, Nevada, New Mexico, Pennsylvania and Wisconsin — a grouping that has topped Republicans’ target list since the election cycle began. Biden won all those states except for Kansas, and each one of those states has a Democratic incumbent seeking reelection except for Pennsylvania, where the party is lining up behind state Attorney General Josh Shapiro to replace term-limited Gov. Tom Wolf.

“The Biden stuff and everything that happened was so loud, and you couldn’t ignore it,” said Neil Oxman, a veteran Democratic admaker based in Pennsylvania, listing everything from Afghanistan to the ebbs and flows of the pandemic. “Clearly the election was nationalized last Tuesday, more so than you necessarily get in some elections.”

McAuliffe’s campaign specifically cited the national headwinds as a significant factor in his loss to Republican Glenn Youngkin, according to a post-election memo that was first reported by NBC News.

“Beginning in August we saw the majority of Virginians say that both the country and the state were on the wrong track,” the memo read. “This trend, with 65 percent of voters saying that the country was on the wrong track by late October, was ultimately a strong negative draw away from Democrats and depressed both Democratic enthusiasm and support from some later deciding voters.”

The key for Democrats, Oxman and others said, would be a turnaround in the political atmosphere — one that could still change over the next year, especially given how much it has changed since the 2020 election. It is about “whether Biden and the administration will get its act together and make it a little more even playing field for Democrats — or it’s going to be as bad as it has been for us, because they haven’t been able to get it together,” he said.

But Republicans see Youngkin’s victory as the first of many wins to come, even facing the challenge of having to dislodge a barrage of incumbent Democratic governors across the map.

“We see what happened in Virginia as a pretty solid game plan of how we can work through as we continue to build in the state here,” said Paul Farrow, the state GOP chair in Wisconsin, where Republicans are trying to unseat first-term Democratic Gov. Tony Evers. Farrow ticked through a series of issues he believed were strong for Republicans a year out, which included education and rising inflation.

One of the keys for Democrats will be to develop a response to the newly-emboldened GOP. “You’re going to see Republicans try to run on the Youngkin playbook, and Democrats need an aggressive answer that defines Republicans on education, particularly around taking money out of public schools,” said Jared Leopold, a veteran consultant who was a top staffer at the Democratic Governors Association in previous cycles.

Democrats also need to grapple with a different economic message, strategists say — including addressing the rising costs of everyday goods due to inflation. After his administration largely dismissed inflation concerns as temporary for months, Biden on Wednesday said in a statement that inflation “hurts Americans pocketbooks, and reversing this trend is a top priority for me.”

Democrats are hoping that the president’s dual track legislative agenda — the infrastructure bill, which Biden is scheduled to sign into law next week, and his sweeping social program expansions proposed in the reconciliation package — will buoy the party, and both poll well among Americans.

Battleground state Democratic parties are eager to tout the new infrastructure package, holding press conferences to sell the bill to voters back home.

“President Biden and the Democrats, they told us that they would deliver, and they did,” Felesia Martin, a Milwaukee County supervisor and a vice chair of Wisconsin’s state Democratic Party, said at one of those press conferences. “This is something that brings deliverables straight to Milwaukee. And for every voter out there who doubted that the Democratic contingency in D.C. could not do it, we are here to say today … they said they would do it, and they did.”

Democrats aren’t just counting on the national winds to change. They are also banking on their entrenched incumbents to defend swing states a lot more closely divided than Virginia and New Jersey.

They’re particularly hopeful that contested Republican primaries could spit out a Republican nominee who is broke and bruised up.

“Combined with the resounding victory in the California recall, as things were looking very challenging over the summer, we continue to prove that we can elect our incumbents no matter how difficult the environment is,” Democratic Governors Association executive director Noam Lee said last week, after New Jersey Gov. Phil Murphy won reelection by a closer-than-expected margin.

They will likely get their wish in the top tier of those contests. Nevada, Michigan, Pennsylvania and Wisconsin have all already attracted credible Republican candidates who could split the field and foreshadow a messy primary.

In Wisconsin, Evers has raised $5 million during the first half of the year, the last time fundraising numbers were publicly disclosed, with $7.3 million in cash on hand, which could give him a major advantage over his eventual Republican challenger. He’s facing a potentially major fracture in the Republican field: Former Lt. Gov. Rebecca Kleefisch was seen as a strong candidate, but former President Donald Trump is publicly trying to draft former Rep. Sean Duffy into running for the nomination, and businessperson Kevin Nicholson could also jump into the race.

Similar dynamics have cropped up elsewhere. There are crowded Republican fields to challenge Nevada Gov. Steve Sisolak and Michigan Gov. Gretchen Whitmer. And In Pennsylvania, Shapiro has a glide path to the Democratic nomination, while an already packed GOP primary continues to grow.

The cleanest lane Republicans have against that top tier of potential pickups is in Kansas, where state Attorney General Derek Schmidt, a Republican, has mostly cleared the field to challenge Democratic Gov. Laura Kelly in a state Trump won easily.

For Republicans, two of their toughest defensive states next year, Arizona and Maryland, have term-limited incumbent governors — while Georgia Gov. Brian Kemp is battling persistent rumors of a Trump-backed primary challenger.

Republican governors did, however, get an unexpected boost on Tuesday when New Hampshire Gov. Chris Sununu announced he would seek reelection instead of running for the Senate, making the governorship significantly harder for Democrats to win. And the GOP also reaps the benefit of incumbency in some of the most expensive states, with Texas Gov. Greg Abbott and Florida Gov. Ron DeSantis both seeking reelection and bringing massive war chests to bear.

Republicans counter that the swing in New Jersey was just as dramatic as Virginia, even with the narrow win from the incumbent Murphy. And they note that McAuliffe, a longtime party fixture and former governor himself who ran on his and his successors’ records jointly, is about as close of a stand-in to an actual incumbent as one could get in a state that forbids its governors from serving a second consecutive term.

“McAuliffe spent his entire career as a Clinton bagman and had a record as governor that became an issue,” said Jesse Hunt, the communications director of the Republican Governors Association. “That very much was a dynamic in this race, where you had an outsider challenging the status quo.”

Another concerning signs for Democrats out of Virginia, identified in the McAuliffe memo, was turnout. Turnout was way up over the state’s 2017 election, when now-outgoing Democratic Gov. Ralph Northam cruised to victory. McAuliffe received more raw votes than Northam, but still ended up on the losing side of the ledger, unable to counter the wave of enthusiastic Republican voters.

That reality challenges a long-held axiom that Democrats do better in higher-turnout elections — something that was previewed in 2020, when despite Biden’s win Democrats had disappointing down-ballot results across the country.

“Democratic turnout was good. Republican turnout was slightly better,” said Wendi Wallace, the deputy executive director of the DGA. “We need to tighten [our] message and focus on what we’re delivering for people as we move into next year.”