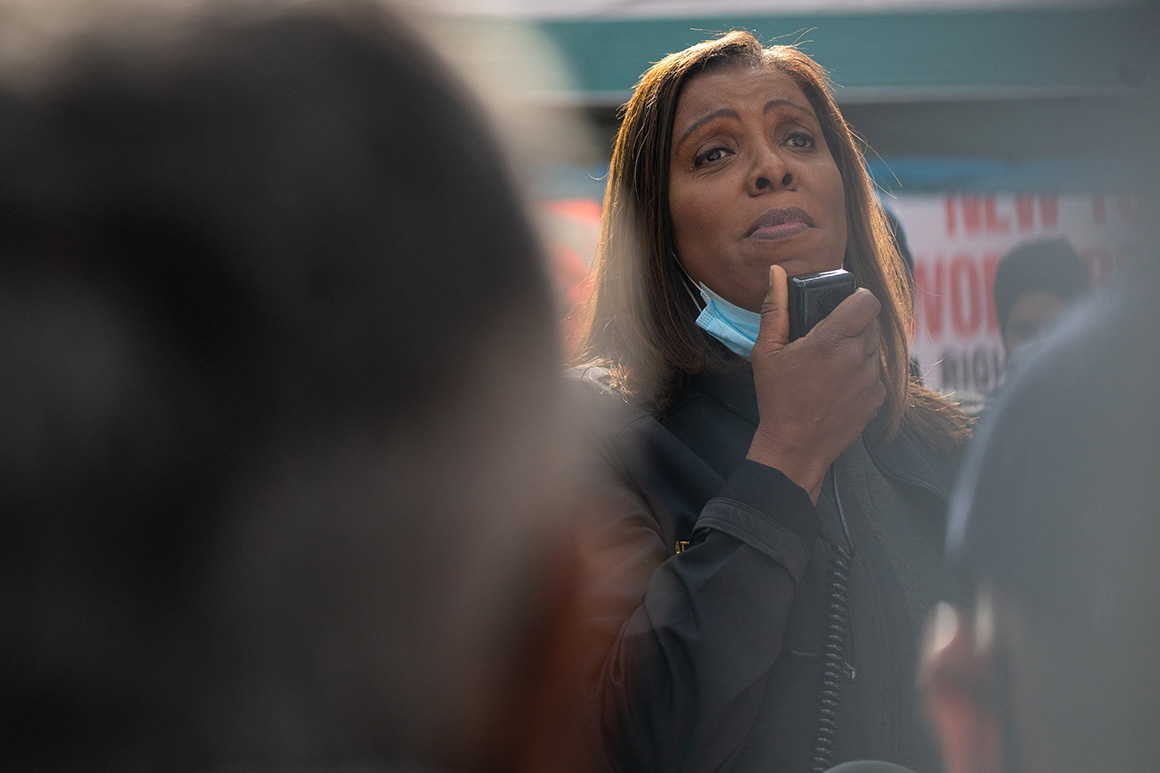 SAN JUAN, Puerto Rico — The most intense jockeying yet around New York’s race for governor is playing out right now — in Puerto Rico.

Hours after Democrat Eric Adams clinched the open seat to succeed Bill de Blasio as New York mayor, the state’s political class descended on this sunny city — some 1,600 miles from Manhattan — as they jostled for influence, jobs and endorsements.

It was hard to miss who was gunning for the biggest job of all: Gov. Kathy Hochul, Attorney General Tish James and de Blasio all arrived Wednesday and Thursday, each plotting out paths to their Democratic primary campaigns.

The annual SOMOS conference has been one of the most important times on New York’s political calendar for decades. The four-day junket is named for the nonprofit group that hosts it. SOMOS was founded in the late 1980s to foster the city and state’s powerful Latino community.

“It’s a really important event each year,” de Blasio said before arriving. “It’s actually where most of the leadership of this state get together and a lot of important work is done there that actually doesn’t happen any place else.”

On the same flight as de Blasio was Hochul, who delivered remarks at a reception for pro-choice women’s political organization Eleanor’s Legacy. De Blasio also attended the soiree, and Hochul hosted her own event Friday afternoon. James — whose bombshell report on Gov. Andrew Cuomo’s alleged misconduct prompted his resignation — swung by Eleanor’s Legacy reception, after striking out on her own Thursday with an event at a San Juan elementary school.

Not campaigning in Puerto Rico? Gubernatorial aspirant and city Public Advocate Jumaane Williams, who has a fear of flying.

By Thursday afternoon, the scene in San Juan coalesced around the Royal Sonesta Hotel where hordes of people milled about on the resort’s lush patios. Through the backslapping, elbow grabbing, and cheek kissing ran a steady flow of rum, wine and Medalla, the local beer of choice.

But the real schmoozing tends to start later in the night at El San Juan bar in the same oceanside cluster of resorts. While many Democrats are still reeling from their poor showing on Election Day, the vibe resembled “a big family reunion,” noted one politico, who said he hadn’t seen many of the people in attendance since before the pandemic. (The trip was canceled last year due to Covid-19.)

James is Hochul’s only declared challenger so far and at her Thursday event, offered one of the first glimpses into themes of bridging social and economic injustices that could be central to her campaign.

The event, alongside Hispanic Federation CEO Frankie Miranda and local and visiting leaders, was a call for the Biden administration to engage on the U.S. v. Vaello-Madero case now before the U.S. Supreme Court. The case centers around social safety net benefits that U.S. citizens on the island are unable to access.

James more broadly emphasized the responsibility she said she feels every time she visits Puerto Rico, where people she considers her friends and neighbors are “unfortunately treated as second class.”

“We are an ocean of American prosperity,” she said. “That prosperity should be shared by all Americans on this island.”

James said she had no specific plans to meet up with Hochul or Adams while in Puerto Rico, but that she is in regular communication with both and will “continue to engage with both of them on policy issues.”

Miranda, when asked, said the event was not an endorsement for James in 2022. “The attorney [general] has been a staunch ally” but “we are working with all of our friends,” he said. The Hispanic Federation will be meeting with Hochul on Friday.

James did, however, comment on the previous governor, who also used to regularly tout his relationship with Puerto Rico. He and his team have continued to say that James’ investigation — which detailed sexual harassment allegations that led to Cuomo’s resignation and now criminal charges — was a political ploy. Those accusations ramped up after she officially announced her gubernatorial bid.

“I think he needs to move on,” James said.

But next year’s Democratic primary isn’t the only contest playing out in the bars and on the beaches. SOMOS is an important arena for New York City Council speaker’s race — where members will pick their legislative leader, one of the most powerful posts in city government.

Candidates and incoming members milled about Wednesday night, outside a fancy reception hosted by State Comptroller Tom DiNapoli. The race has at least five contenders — Carlina Rivera, Justin Brannan, Francisco Moya, Diana Ayala and Keith Powers, all of whom are attending the conference.

Much of the chatter focused on Brannan, a leading candidate for the leadership post who nearly lost his general election to a Republican Tuesday night.

Brannan is now awaiting the final count of absentee ballots and has said he is confident he will emerge victorious, but being on political life support — even temporarily — is giving some members pause while affording his opponents an opportunity to diminish his chances.

Adams himself seemed in good spirits Friday, fresh off a commanding win in this week’s mayoral election. Following the conference, he’s planning a vacation in the Dominican Republic.

“I have a public schedule and sometimes I’m just gonna hang out on the beach, throw on my swimming trunks and hop in the water and just enjoy myself,” he told reporters Friday.