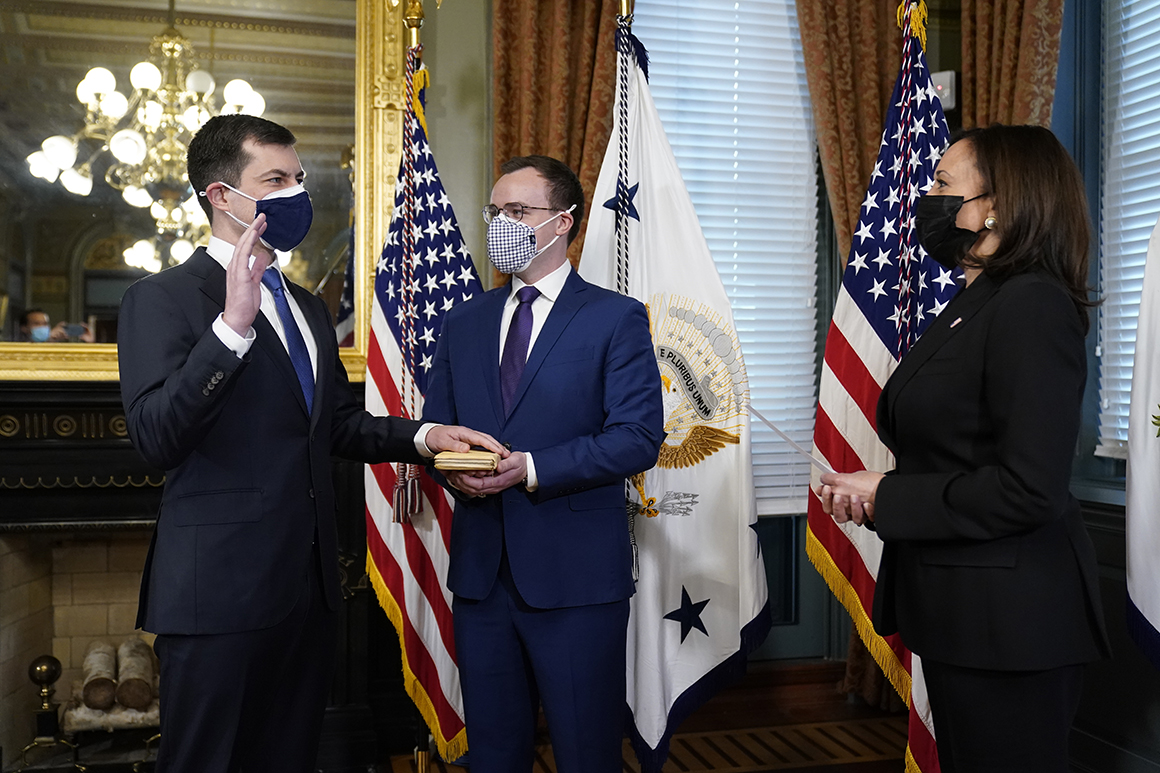 The GOP has had plenty of reason for good cheer in recent months, whether it’s the victory in Virginia’s gubernatorial election, the Republican wave in other off-year elections or President Joe Biden’s falling poll numbers.

Nothing can compare, though, with the glad tidings of a potential showdown between Vice President Kamala Harris and Transportation Secretary Pete Buttigieg to be Biden’s successor in 2024 should he decide not to run for reelection.

Surely, there would be other serious candidates in that circumstance, but there is no doubt that Harris and Buttigieg would be high on the list of potential contenders, as POLITICO, the Washington Post and others have noted over the past week. They are both prior presidential candidates who aren’t exactly hiding their ambitions for higher office.

As it happens, they also exemplify the contemporary Democratic Party’s electoral deficiencies, while bringing their own flagrant personal political weaknesses to the equation.

If this is really the choice Democrats would face should Biden decline to run, they better hope he defies age, bounces back to robust political health and is prepared to serve again well into his 80s. Because Harris and Buttigieg are options that should have Republicans much more excited than Democrats.

Harris flamed out in the 2020 Democratic nomination well before the Iowa caucuses, unable to settle on a message or a political identity. She constantly chased the hot new thing. She was for “Medicare for All” before she was against it, or at least mixed on it. Her staff was obsessed with the progressive hothouse of Twitter, which is a powerful device for creating a false sense of what real voters, even Democratic primary voters, care about. To his credit, Biden determinedly ignored most woke obsessions in his campaign, though he pledged to select a woman of color as his running mate, resulting in Harris’ pick.

Anyone who thought the Harris of the Democratic primaries was not a true reflection of her skills as a politician has been proved sadly mistaken by her performance as VP — she’s basically picked up where her desultory campaign left off. In the latest USA Today-Suffolk University poll, Harris had a dismal 28 percent approval rating, lower than most of her predecessors at the same point in their terms. It’s difficult to rate that low without getting indicted or suffering some other embarrassing scandal, but Harris has somehow managed this in the course of 10 routine, not particularly high-profile months.

News accounts have related the discontents of her camp, which believes she has been ill-served by the White House giving her the wrong assignments. Yet Harris herself sought the lead on voting rights legislation. It wouldn’t have taken much foresight to realize the Democrats’ bill on that issue wasn’t going anywhere in the Senate, absent an extremely unlikely move against the filibuster. And Biden gave Harris responsibility for the migrant wave coming from the Northern Triangle just as President Barack Obama had done with him when he was vice president. This is indeed a thankless task, especially so when you are too beholden to the left’s orthodoxies to suggest any enforcement measure that might diminish the flow.

The sense from the anonymous comments Harris’ allies have made to the media is that she’s a historic figure with unique leadership abilities because she’s a woman of color, but that she’s also being undone because she’s a woman of color. One former aide suggested to CNN that the White House has given more air cover to Buttigieg than Harris because he’s a white male and she’s not.

This fixation on race and gender plays much better with the left-wing activist class than with the public. The simpler explanation for Harris’ woes is that she’s a below-average politician serving as an unpopular president’s VP. It’s hard to believe that somehow by 2024 she’s going to be transformed into an electoral juggernaut, though she would likely be guaranteed the Democratic nomination if something happened to Biden and she became president before his term ended.

Buttigieg has had a happier tenure in the Biden administration so far. With his surprising, but still quite limited, success in the 2020 Democratic primary, he bootstrapped himself into a Cabinet position and now is enjoying a windfall of resources thanks to the infrastructure bill recently signed into law. Transportation secretary isn’t a natural launching pad for a national campaign, but neither is mayor of South Bend, Indiana, and Buttigieg didn’t let that stop him the last time around.

He embodies, to a fault, the party’s growing strength among college-educated whites. The son of parents who both taught college and a former mayor of a college town, he’s smooth, credentialed, hyper-articulate and a quick study who knows enough to charm and impress journalists and other white-collar creative types. In the primaries in 2020, it was his smattering of Norwegian; now it’s his familiarity with biographer Robert Caro’s critiques of New York development official Robert Moses.

It’s become increasingly clear, though, that the Democratic Party’s new base among college-educated voters is a trap if it is pursued to the exclusion of an appeal to working-class voters. The party’s poor standing with non-college educated voters has begun to show up in eroding support among Latinos, a constituency that not too long ago was presumed to be a key pillar of the Obama-crafted “coalition of the ascendant.” There is still no sign that Buttigieg could appeal to these kinds of voters if his political life depended on it. Indeed, it did in the 2020 primaries, and he came up empty.

A successful post-Biden Democratic future is more likely to be found in the likes of New York Mayor-elect Eric Adams than Harris or Buttigieg. It’s far too early to know how Adams’ City Hall tenure will actually turn out, but he has the qualities and approach that, in theory, could be fruitful for Democrats nationally.

Adams is an African American former cop with a hard-knocks upbringing that gives him working-class street cred. He is willing to appeal to race when politically useful to him, but he also knows that woke bromides aren’t the way to appeal to African American voters, who put him over the top in the Democratic primary. He’s a standard progressive in many respects, but he, like Biden in 2020, has proved immune to fashionable left-wing causes. He not only defused a hot-button cultural issue, namely crime; he campaigned on it and made it a strength, an ability that most national Democrats have lost as the party has moved left since 2016.

On top of all this, he is interesting and unpredictable, defying easy categorization. Neither can be said of Harris or Buttigieg. It’s very unlikely Adams himself would be ready for a national campaign two years from now, but Democrats need to learn from his success so far.

Meanwhile, even if the GOP is on a roll at the moment, it shouldn’t get its hopes up. At the end of the day, a 2024 Democratic primary dominated by Harris and Buttigieg is probably too good to be true.