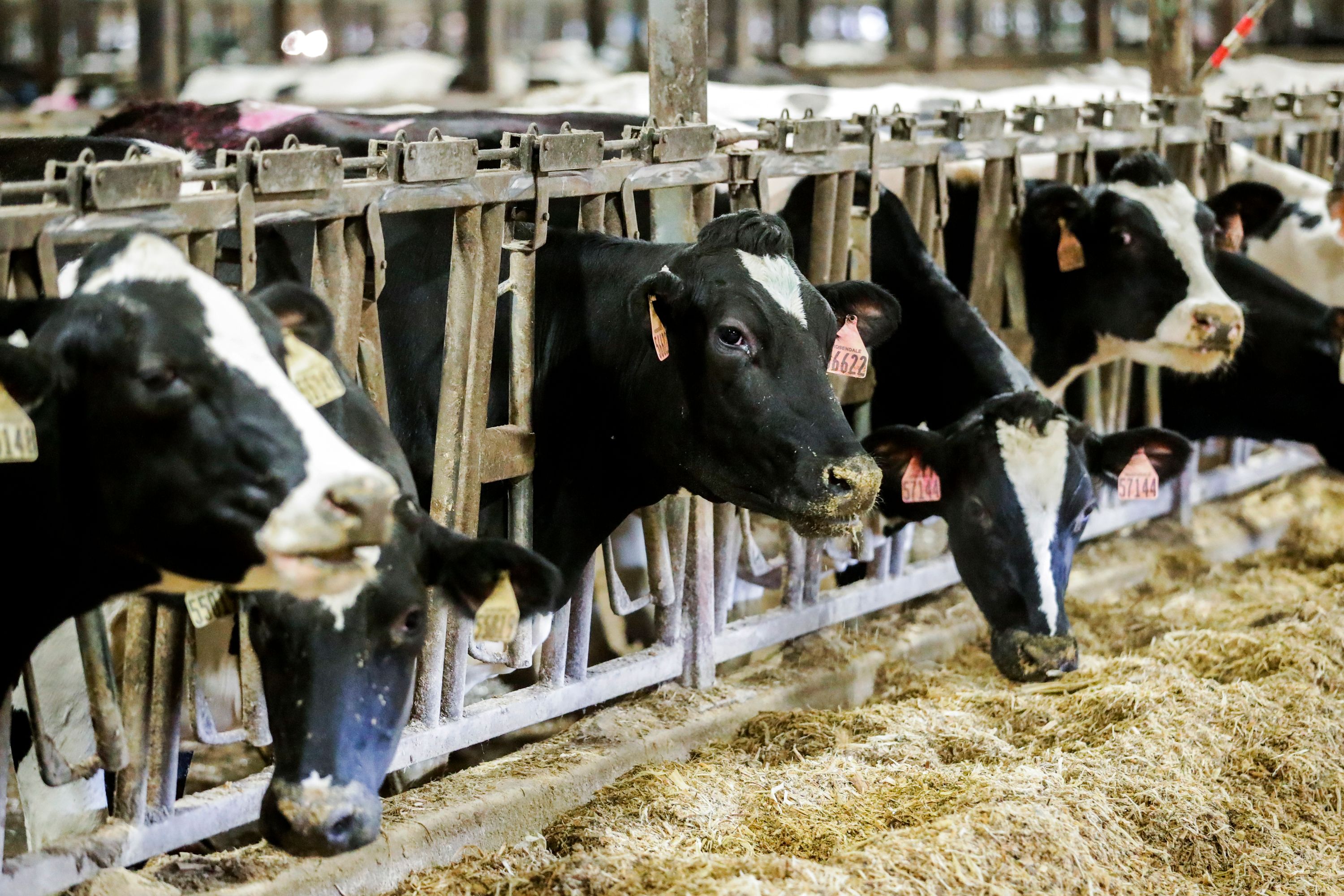 President Joe Biden made a bid for global leadership on climate change action by launching the first international agreement to reduce planet-warming methane pollution at this month’s U.N. climate conference in Glasgow. Days later, the White House unveiled the details of its plan to reduce U.S. methane emissions, calling it a “whole-of-government initiative that uses all available tools,” including “commonsense regulations,” to reduce methane emissions “from all major sources.”

That would be great if it were true, but it’s not.

While the Biden action plan includes serious and essential new regulations on methane emitted by oil and natural gas operations, the plan includes no serious actions — none — to regulate our nation’s largest industrial source of methane emissions: animal agriculture.

In fact, the Biden administration’s action plan misrepresents and minimizes the livestock sector’s contribution to the methane emergency. According to the action plan, the oil and gas sector is the “largest industrial source” of methane emissions in the U.S. Landfills are “the second largest industrial source.” But the cited Environmental Protection Agency (EPA) data does not support this. Take a look at the pie chart included in the action plan: 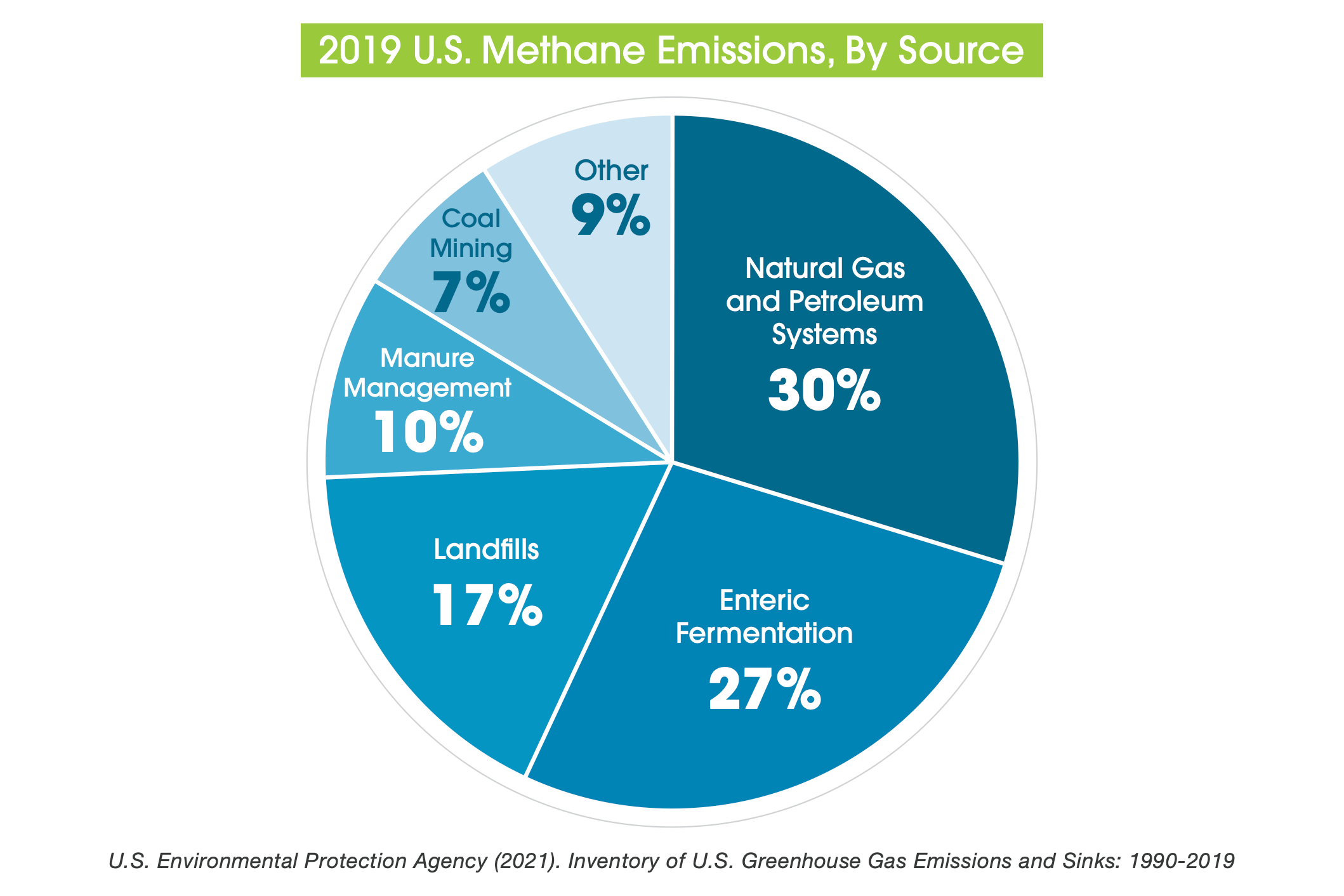 According to the EPA’s own data, the animal agriculture industry is the No. 1 industrial source of methane emissions in the U.S., contributing an estimated 37 percent of total human-caused emissions. As the chart shows, cows and other ruminant animals (“enteric fermentation” on the pie chart) emit 27 percent of the total methane emissions, and livestock manure (“manure management”) emits another 10 percent. For some reason, the agency has chosen to list those two livestock sources separately, but together they clearly are the largest category. The oil and gas industries are second, responsible for 30 percent of emissions, and landfills are third, responsible for 17 percent.

This creative accounting and the administration’s policies belittle the livestock industry’s role in the methane emergency. While Biden and other U.S. officials are preaching the importance of slashing methane emissions to prevent catastrophic warming and imposing tough new methane regulations on fossil fuel companies, they are allowing super-polluting meat and dairy corporations to continue to emit massive amounts of the same greenhouse gas with impunity.

Methane has driven about one-third of global warming to date and emissions associated with U.S. animal agriculture continue to grow. Reducing carbon dioxide pollution — which can warm the planet for centuries or millennia once released — is vital to stabilizing the climate in the long term, but it will take decades for those cuts to slow the planet’s rate of warming. By contrast, reducing methane — which is significantly more powerful than carbon dioxide at trapping heat in the atmosphere but mostly degrades within ten years — presents an unparalleled opportunity to slow the rate of warming nearly immediately.

It’s an opportunity that the Biden administration is poised to squander. The Clean Air Act gives the EPA the power to regulate methane pollution from animal agriculture operations without congressional approval. Instead of using that power, the White House’s climate plan for animal agriculture consists entirely of subsidizing “voluntary” and “incentive-based” methane-reducing technologies and practices. These industry-promoted measures, such as adding new ingredients to livestock feed that reduce methane production and capturing (and later burning) methane released by factory farm manure lagoons, promise to reduce “emissions intensity” — the emissions produced per pound of meat and dairy products — but they don’t solve the problem.

Subsidizing these quick fixes does nothing to limit the sector’s total emissions, particularly if production by the world’s largest meat and dairy corporations continues to increase as expected. Nor does it address the forces driving our continued production of far more meat than the planet can sustain: consumer demand remains high because factory-farmed foods are artificially cheap. The federal government gives multinational livestock and feed corporations billions of taxpayer dollars in subsidies each year to farm in extractive ways that accelerate climate change and make the nation more vulnerable to its effects. It then allows these companies to emit methane and other greenhouse gases, pocket the profits, and stick the public with the bill. The Biden administration now plans to give meat and dairy corporations even more taxpayer dollars — and a green-washed image — to install optional technological band-aids that will, at best, inadequately reduce their pollution and, at worst, incentivize and further entrench the most methane-generating systems of animal confinement and manure storage. Biden’s methane action plan is supposed to be “cost effective” and “commonsense.” With regards to animal agriculture, it’s neither.

To avoid dangerous global temperatures, the EPA can and should start regulating greenhouse gas pollution from animal agriculture operations. Like oil and gas facilities, factory farms must be required to monitor, report, and significantly reduce their methane emissions. That will mean transitioning our current system of highly consolidated, intensive-confinement animal factories and vast manure lagoons to a well-managed, pasture-based system with significantly fewer animals. The EPA is proposing strict new regulations on methane pollution from oil and gas operations. Methane pollution from the animal agriculture industry should be treated no differently.

At the U.N. climate summit, Secretary of Agriculture Tom Vilsack, a former dairy industry lobbyist, justified the Biden administration’s all-taxpayer-funded-carrots-and-no-sticks approach by saying that there is “significant reluctance to regulation” in the agriculture industry, “but great acceptance of incentives.” The fact that livestock corporations would prefer to gobble up public dollars rather than be regulated for their chart-topping methane pollution is as irrelevant as it is unsurprising. Biden’s climate policy should be dictated by what the planet needs, not by what oil and gas companies want, and not by what meat and dairy companies want.

Reducing methane pollution from all major sources, including animal agriculture, is our best chance to slow climate change over the next 20 years. If the Biden administration continues to ignore and refuse to curb the livestock industry’s methane pollution, that opportunity will soon be gone. As Biden himself said in Glasgow, “one of the most important things we can do in this decisive decade — to keep 1.5 degrees in reach — is reduce our methane emissions as quickly as possible.”

Every fraction of a degree of temperature increase matters, and the clock is ticking.