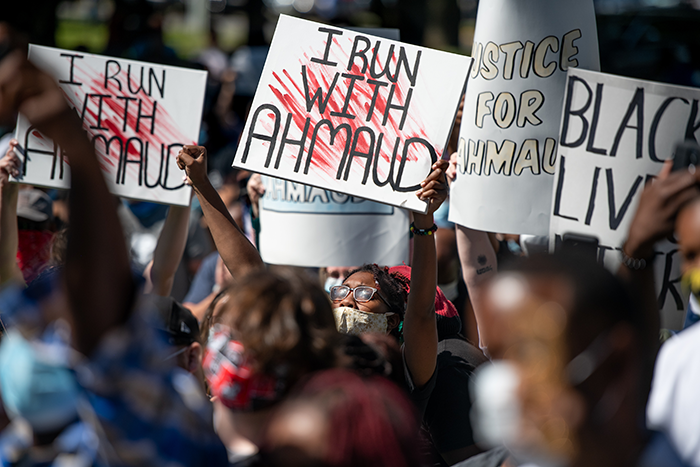 On the eve of Thanksgiving, America is processing one massive jury verdict and awaiting another.

The jury in Kenosha acquitted Kyle Rittenhouse of all charges, siding with his claim that he acted in self-defense. The jury in Brunswick, Georgia, now has to make a similar judgment about the three men charged with killing Ahmaud Arbery.

For millions of people watching these trials, far more is at stake than whether four men murdered three others. They’re covered and watched so obsessively because we see them as referenda about hot button issues that elude resolution elsewhere.

Some on the political right look at the Rittenhouse acquittal as proof that the protests for racial justice two summers past were lawless mobs — and that armed resistance to protest is not only defensible, it is virtuous. Some on the political left look on the Arbery prosecution as a dagger to the heart of the implicit (and often explicit) association between Blackness and crime. If the defendants are convicted, they’ll read the result as proof that the citizen’s arrest the men claim to have been making is just a modern form of slave patrol.

As a law professor and criminal defense lawyer who has spent a long career puzzling over the recurring collision between justice and law, I understand the desire to imbue high profile trials — especially criminal trials like Rittenhouse and Arbery, or Derek Chauvin’s trial for killing George Floyd earlier this year, or the Trayvon Martin trial — with broader and conclusive social meaning.

These courtroom battles, with their drama and finality, offer more than the prospect of justice in an individual case. For some, they promise a resolution to our most intractable problems — problems that otherwise prove unsolvable.

There’s a reason we look to courts for these solutions. Because we are so bitterly divided, the mechanisms and institutions by which we might otherwise achieve social consensus have broken down. Elections don’t end our arguments, as Jan. 6 made plain. In a post-truth age, neither does recourse to shared facts or widely trusted voices. In short, we lean on criminal trials because everything else has collapsed.

But like any quick fix, relying on a criminal trial to do democracy’s job is a fool’s errand.

To begin with, those who seek bigger answers from a criminal trial seem not to understand what takes place inside one. Criminal trials ask one question, and one question only: Has the prosecution sustained its burden? Has the state proven that this person, in this moment, committed a crime? A sensible judge will keep the jury laser-focused on that issue, and for good reason. Anything else raises the prospect that an accused will be convicted for ills not of his making, and beyond his power to control.

The trial in Kenosha was not an occasion to ask whether gun control is a good idea, whether right-wing media has too much power or whether Antifa is a menace. The jurors did not proclaim Rittenhouse a hero. They did not nominate him for public office. They didn’t even say he did the right thing when he shot and killed two people. They said the state failed to sustain its burden of proof. That’s it.

Because the focus of a trial is so purposely narrowed, it excludes nearly all the things society ought to care about going forward. The trial of Derek Chauvin did not examine the culture of the Minneapolis Police Department. It did not — and could not — explain how someone like Chauvin rose through the ranks to a position of authority. It did not try to understand the long history of animosity between the police and Minneapolis communities of color. It did not take up the pressures placed on the police by politicians, prosecutors and the public to “get tough on crime,” or ask how those pressures distorted police practice.

All the questions we might ask if we want to create systemic change are deliberately excluded from the jury’s consideration. Chauvin’s trial asked whether he murdered George Floyd — a backward-looking question of surpassing importance — but that’s all. Because a criminal trial affixes blame for what happened yesterday, it cannot decide what it takes to make society better tomorrow.

Not only can’t criminal trials make these decisions; they shouldn’t. There is only one way to decide what is best for the country. It is the hard, messy, unsatisfying, flawed work of democracy. The capacity for self-governance, for deliberation and compromise with an eye toward consensus, free of vitriol and without violence, must be constantly renewed. It does not come easily. It may not even come naturally. But democracy is a muscle that atrophies with disuse. Every time we imagine a criminal trial as the path to national change, we enfeeble the one power that can lead us from darkness.

That is why a verdict in Brunswick, no matter what it is, cannot solve our problems. It cannot answer the racially charged questions of belonging and entitlement at the core of the case. It cannot tell us whether white men secure in their white suburb should be empowered to decide whether a blameless Black man “belongs” in their space. Or whether they ought to have the authority to act on that judgment by arming themselves and giving chase. Or whether they should be free to kill the Black man who resists. It will no more answer these questions than did the trial of George Zimmerman for the killing of Trayvon Martin. And most of all, it cannot shed light on the history that would lead these white men to think their behavior was just, or describe the future that makes this horror impossible.

The verdict in Brunswick may achieve justice for Ahmaud Arbery, but it will not solve our ills. That’s our job.