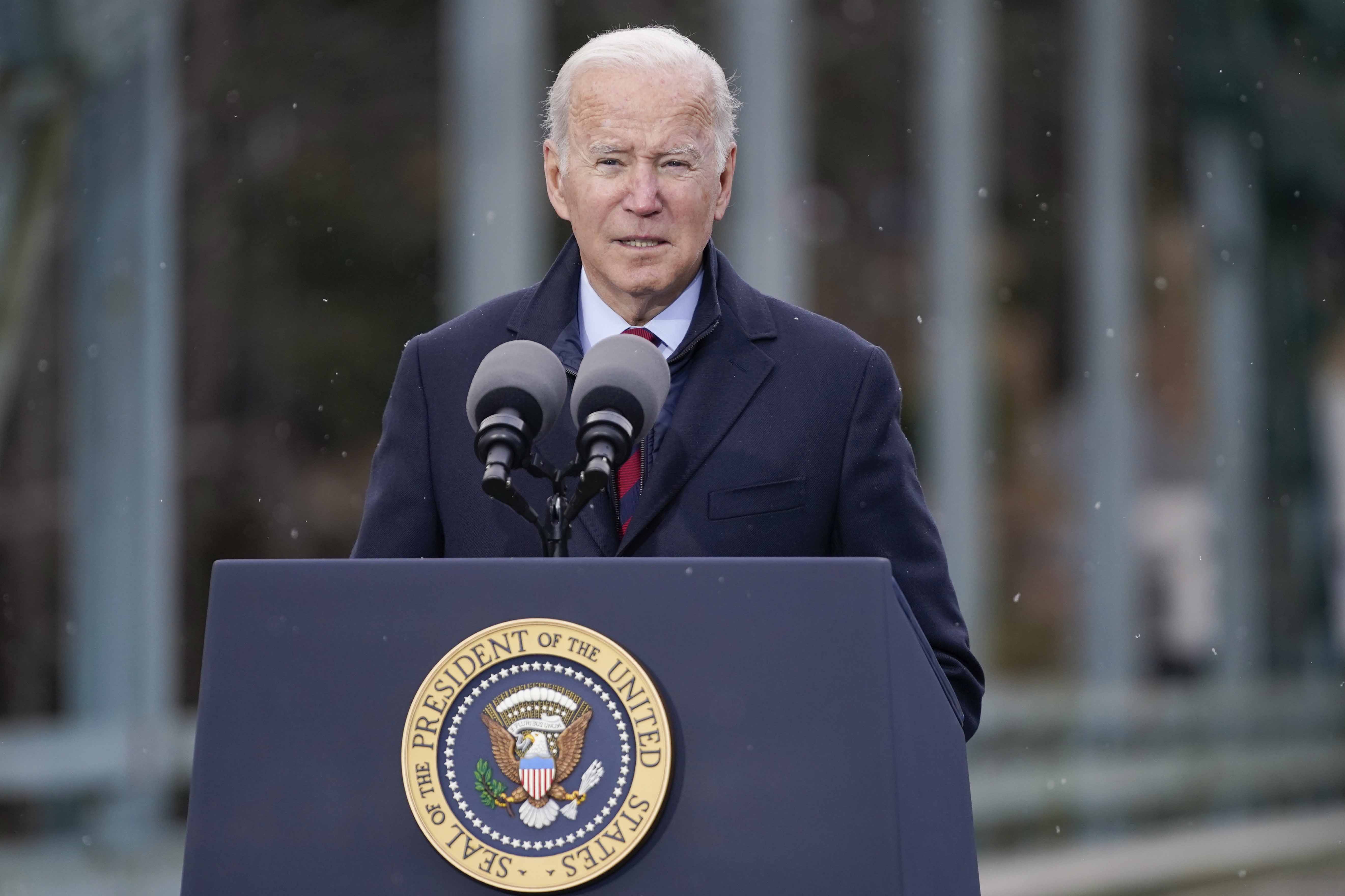 The gasoline price spike feeding Americans’ inflation anxiety has the White House scrambling to show voters it’s got a plan to ease their pain at the pump.

Biden aides, including National Security Adviser Jake Sullivan and top economic adviser Brian Deese, as well as the Senior Adviser for Energy Security, Amos Hochstein and White House National Climate Adviser Gina McCarthy and her top aide, Ali Zaidi, met on Friday at the White House to consider actions the administration could take to cool off energy prices, according to three people familiar with the meeting. They considered several options, those sources said, ranging from releasing oil from the nation’s strategic petroleum reserve to ease gasoline prices, curbing crude oil and gas exports, and even softening biofuel blending rules for refineries.

Consumer sentiment has plunged in recent weeks as inflation climbed to the highest levels in more than a generation. Those rising prices are especially evident in the gasoline market, where drivers have seen the per gallon price jump to the highest levels in seven years. On top of that, homeowners are bracing for expensive heating bills this winter, with natural gas costs more than twice the year-ago level.

That energy price surge is badly timed for the Biden administration, which just a few days earlier was playing a leading role in the U.N. climate negotiations in Glasgow and as Democrats try to pass their $1.75 trillion bill that contains the biggest ever effort to tackle climate change by boosting renewable fuels over oil, natural gas and coal.

“The people of America will pay dearly for the energy that we are not producing in the United States, because what Joe Biden did in Glasgow was beg OPEC+ to sell more energy and produce more oil for the United States to buy,” Sen. John Barrasso said at a Senate committee hearing on Tuesday.

The inflationary pressure has helped drive Biden’s approval polls to just 41 percent, according to a Washington Post-ABC News poll released last week. About half of respondents put the blame for rising inflation on the White House — not the supply chain issues related to the pandemic recovery that most economists say is most responsible for driving up prices.

Republicans have also pointed to Biden’s January move to cancel the Keystone XL oil pipeline project and later pause auctions of federal land for oil drilling as the culprit, though energy experts have said those actions have had no near-term effect on supply levels or prices.

The White House, which did not comment for this story, has recently stressed that is was looking closely at the situation.

“The message to Americans is that we’re not just closely and directly monitoring the situation — which, of course, we’ve been doing — but we’re looking at every tool in our arsenal,” White House spokesperson Jen Psaki said on Friday. “Our view is that the rise in gas prices over the long term makes it an even stronger case for doubling down our investment and our focus on clean energy options so that we are not relying on the fluctuations and OPEC and their willingness to put more supply and meet the demands in the market.”

Democrats have been split on one of the executive branch’s easiest tools to wield: the Strategic Petroleum Reserve. The Energy Department currently holds more than 600 million barrels of crude oil in its storage facilities, which Energy Secretary Jennifer Granholm has said could be tapped to lower prices.

The oil industry objects to using those barrels to control prices, arguing the stockpile is designed to be tapped only in the event of a supply crunch, like when DOE released some oil in September because of the disruptions that occurred after Hurricane Ida crippled producers’ Gulf of Mexico operations.

Even Democrats are split on its use, with Sen. Majority Leader Chuck Schumer calling over the weekend for Biden to order a release of oil, a move that House Majority Leader Steny Hoyer said on Tuesday he opposed.

In the meantime, energy market experts say the rise in global oil prices has yet to spur oil companies and state-owned producers around the world to ramp up their drilling. Even in the U.S., oil producers have so far been wary of spending money to increase production, fearful of another economic shock like the 2020 crash that decimated their balance sheets and sent dozens of oil drillers into bankruptcy.

That’s left the Biden administration to call on OPEC nations and Russia to open the taps to ease the price pressure, a move derided by Republicans as average gas prices hover near $3.40 a gallon, 60 percent higher than a year ago.

“Inflation is what’s on everybody’s mind and you’re seeing it across the board, but nowhere does it have a more direct impact on middle class voters than at the gas pump,” Sen. John Cornyn (R-Texas) said in an interview. “Biden saying we just need to get Russia and Saudi Arabia to pump more oil is just a bad joke.”

Energy market specialists agree that tactics that were on the Friday agenda at the White House meeting — or any actions from any administration — have little influence on short term fuel prices.

And some of those discussions would likely backfire on Democrats, especially any effort to reduce ethanol blending levels in the nation’s gasoline pool, a program that the agricultural interests and farm-state lawmakers aggressively defend. Even the possibility of examining the Renewable Fuel Standard that governs biofuels drew a preemptive rebuke from the industry.

Geoff Cooper, head of the Renewable Fuels Association, a lobby group, said in a letter to Biden on Tuesday that they “were shocked to learn that one of the potential actions reportedly being discussed by the White House” concerned lowering ethanol blending requirements. In fact, he noted, the 1.1 billion barrels per day of biofuels that are blended into motor fuels were actually lowering the prices at the pump.

While the White House isn’t likely to start a political fight with the powerful agricultural industry or its Congressional backers any time soon, the surging levels of U.S. exports could be a ripe target, particularly natural gas.

Barely a blip in the market five years ago, exports of liquefied natural gas, the super-chilled form of the fuel that is shipped by tanker around the globe, now account for more than 10 percent of the U.S. production. Shipping the fuel to buyers in Asia and Europe, where prices are far higher than they are even at the elevated levels customers are paying in the U.S., means less fuel to tamp down inflation, senators at a hearing on energy prices noted on Tuesday.

“We are exporting our principal advantage in the world economy,” Sen. Angus King (I-Maine) said at an Energy Committee hearing. “We are literally subsidizing Chinese manufacturing by sending them natural gas.”

The Biden administration has focused its public messaging so strongly on climate change and the switch to renewable energy that it’s made itself an open target for Republicans on the issue, said Mark Jones, political science professor at Rice University in Houston. With mid-term elections less than a year away, voter anger over high prices could cost Democrats control of the House and Senate — and any hopes for more ambitious climate legislation.

While the messaging may be difficult, there appear to be few people in the White House skilled in delivering that message, some of the administration’s allies said. The White House lacks the sort of deep experience with fossil fuel markets to go before the public and convincingly explain why fuel prices are at heights last seen nearly a decade ago and that investments in renewable energy will insulate the country from future market swings, said David Goldwyn, analyst at the Atlantic Council and a former official in the Clinton and Obama administrations.

“It’s not politically astute to make the public do a Google search to figure out the nuances of your position,” Goldwyn said. “They’re taking some avoidable hits and they’re not punching back the way they should.”

High fuel costs also pose a danger to Democrats’ climate priorities, said Kevin Book, director of energy consulting firm ClearView Energy. The party can say their infrastructure package and budget bill contain transformative provisions, including a ban on drilling in most federal offshore waters. But rising fuel prices may mean they don’t get many more big bites at that apple any time soon, he said.