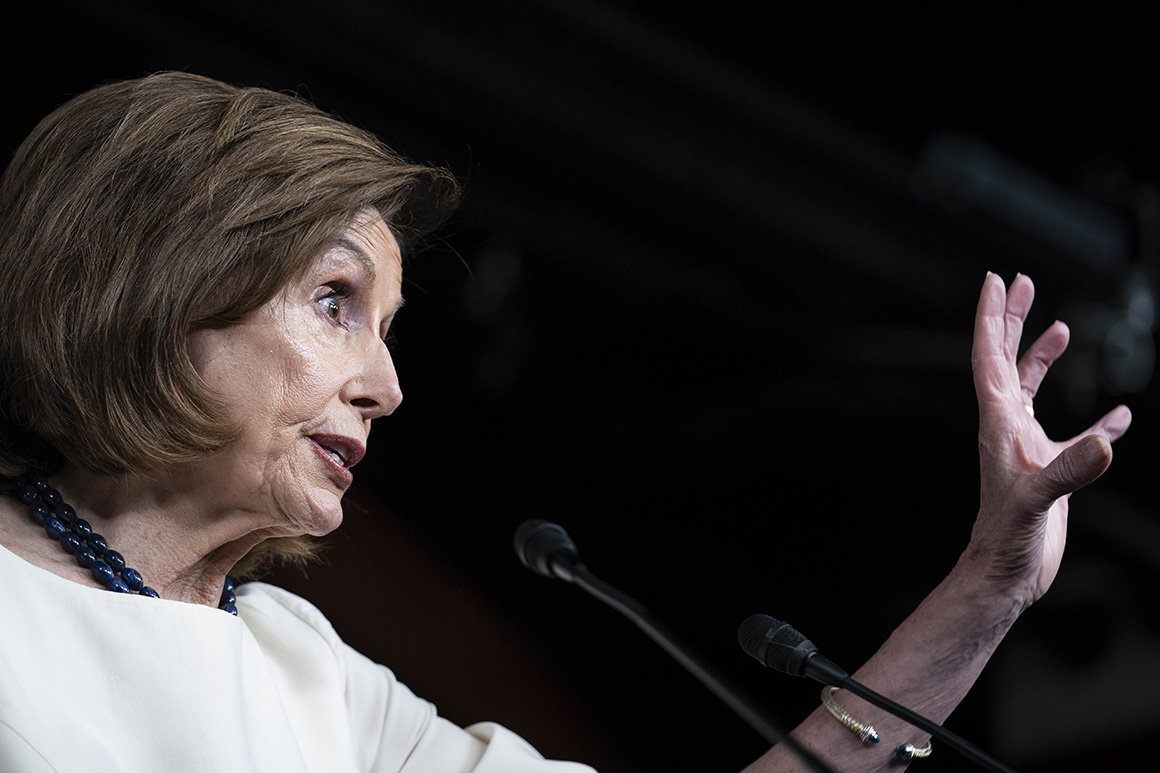 Democrats got a taste this week of how brutal their midterms could be. Now Speaker Nancy Pelosi and her team are trying to turn things around before it’s too late.

The House is barreling ahead Friday with votes on Democrats’ two key domestic priorities — a $1.75 trillion social spending package and a long-stalled $550 billion infrastructure bill — after weeks of embarrassing stops and starts. After another frenetic day of dealmaking, Pelosi and her lieutenants bridged several major policy divides but were still lining up needed votes heading into a critical day.

Democrats in the House, Senate and White House have remained in lockstep for months on a strategy to pass the two pillars of President Joe Biden’s ambitious agenda, even if it’s meant bending to every whim of the evenly divided upper chamber. But the party’s House leaders have now made the calculation that the only way they can get the social spending bill to Biden’s desk is to go on their own.

“We’re at that point where we wait another week, it gets worse, not better,” said Rep. Peter Welch (D-Vt.). “It’s baked and it’s going to get overdone. There’s a point where you’ve got to stop talking and just come to terms with the shape it’s in.”

Exasperated by a confluence of obstacles, from Senate centrists with shifting goalposts to a White House that hasn’t delivered as expected to this week’s election-night thrashing, Democratic leaders have decided to cut off talks that could easily persist into 2022.

The move carries risk: A handful of House Democrats are still vowing to vote against the massive social safety net bill without further guarantees on offsetting its cost. Longtime holdout Sen. Joe Manchin (D-W.Va.), who opposes parts of the House package, is a dubious deciding vote in the evenly split Senate. And that chamber is likely to ping-pong the bill back to the House before long.

“Joe Manchin is a good person. He’s a decent human being,” said Rep. Emanuel Cleaver (D-Mo.). “But I think everybody realizes at some point the train has to stop. I think we’ve picked up all the passengers that we’re going to pick up, and now other people are going to have to transfer trains.”

The vote on Friday follows a furious whipping operation by Pelosi and her leadership team, including Majority Leader Steny Hoyer and Majority Whip Jim Clyburn, aimed at peeling off a dozen or so moderate holdouts that went late into Thursday night. But the House’s sudden strategy shift isn’t surprising for those who know Pelosi.

The longtime Democratic leader has kept a firm grip on her caucus for nearly 20 years, rarely facing a defeat or surprise on the House floor. But for Pelosi, whose governing mantra is never to bring a bill to the floor until it has the votes, a whip count so dependent on factors outside her chamber — and thus her control — has been clearly frustrating.

In order to even get to this point, Democratic leaders were forced to make promises to both the progressive and moderate factions in their caucus, only to abandon those commitments after they became untenable. That meant progressives had to relent on a $3.5 trillion topline and their demands for a full Senate vote, as well as several dearly sought policy goals, including a full Medicare expansion.

And moderates were denied the late-September infrastructure vote they had been guaranteed, while their demands that the House only pass something in full agreement with the Senate have gone unheard.

Pelosi pulled back with her members mostly after disappointments of her own, as well as after two separate presidential visits to the House that ended without movement toward votes. Several of the House’s biggest must-haves were clawed back from the social spending bill amid opposition from senators, namely Manchin and Sen. Kyrsten Sinema (D-Ariz.).

By midweek, Democrats were reeling from an humbling failure at the ballot box, with suburban white female voters swinging wildly to Republicans. Pelosi had seen enough.

The speaker shocked many in her caucus Wednesday by announcing she was adding four weeks of paid family leave back into the social spending bill, despite Manchin’s declared opposition. And she vowed the House would move ahead with a vote on the package this week, with or without the buy-in of the full Democratic Senate.

The abrupt departure from the party’s stick-together strategy, however, was not entirely welcome in the caucus.
Several moderate Democrats chafed at the idea of voting on a bill with several provisions that are dead on arrival in the Senate — one of the clearest requests they’d had from the start, alongside a warning that such a vote would invite GOP attack ads.

As far back as this summer, moderate Reps. Stephanie Murphy (D-Fla.) and Josh Gottheimer (D-N.J.) warned party leaders they wouldn’t back legislation that hadn’t cleared the Senate’s political tripwires — namely, Manchin and Sinema — as well as the budgetary ones that would determine whether the bill could pass the upper chamber without a filibuster.

Those anxieties intensified after the party’s battering in Virginia and other down-ballot races on Tuesday, when the most vulnerable Democrats watched culture-war issues consume even suburbs that have trended blue.

“It seems like we’re making the [social spending bill] more complicated and something that’s harder to pass,” said Rep. Scott Peters (D-Calif.). He’s one of the dozen-plus beleaguered moderates who have urged leadership to pivot their attention to the Senate-passed infrastructure deal, rather than ramming through a rushed bill.

“Look, I think it’s ridiculous to add paid leave. I’ve always said paid leave would be great. … But, you know, you have to understand that we need 50 votes in the Senate. It’s not hard math; it’s not even algebra,” Peters said.

The sudden decision to reinstall paid leave into the bill — after Pelosi and many of her long-time House allies have pushed it for decades — may have helped inject much-needed momentum to a bill that had languished on their side of the Capitol for months. Paid leave is one of the most popular provisions out of any in the bill.

Manchin has said he got no heads-up about the House move and continued to indicate he wants to address paid leave on a bipartisan basis. Still, some House Democrats argued that Pelosi’s move wasn’t a total gamble: The West Virginia Democrat voted to approve 12 weeks of paid leave for federal workers as part of a sprawling Pentagon policy bill in 2019.

The speaker took that big swing after several dispiriting months for House Democratic leaders. They watched the Senate pass an infrastructure bill void of House priorities, then faced demands that their chamber write a social spending package with the behemoth price tag of $3.5 trillion despite a secret agreement among senators that the final bill wouldn’t go above $1.5 trillion.

Even if House Democrats’ swing doesn’t whiff, some saw the push for Friday’s vote as already insufficient.

“If there was supposed to be a rush, the rush should’ve been before Tuesday’s election,” said Rep. Filemón Vela (D-Texas), one of nine moderates who demanded an infrastructure vote in September.

“There’s really no reason to rush the process at this point,” Vela added. “We totally blew the opportunity to win the governor’s election in Virginia.”