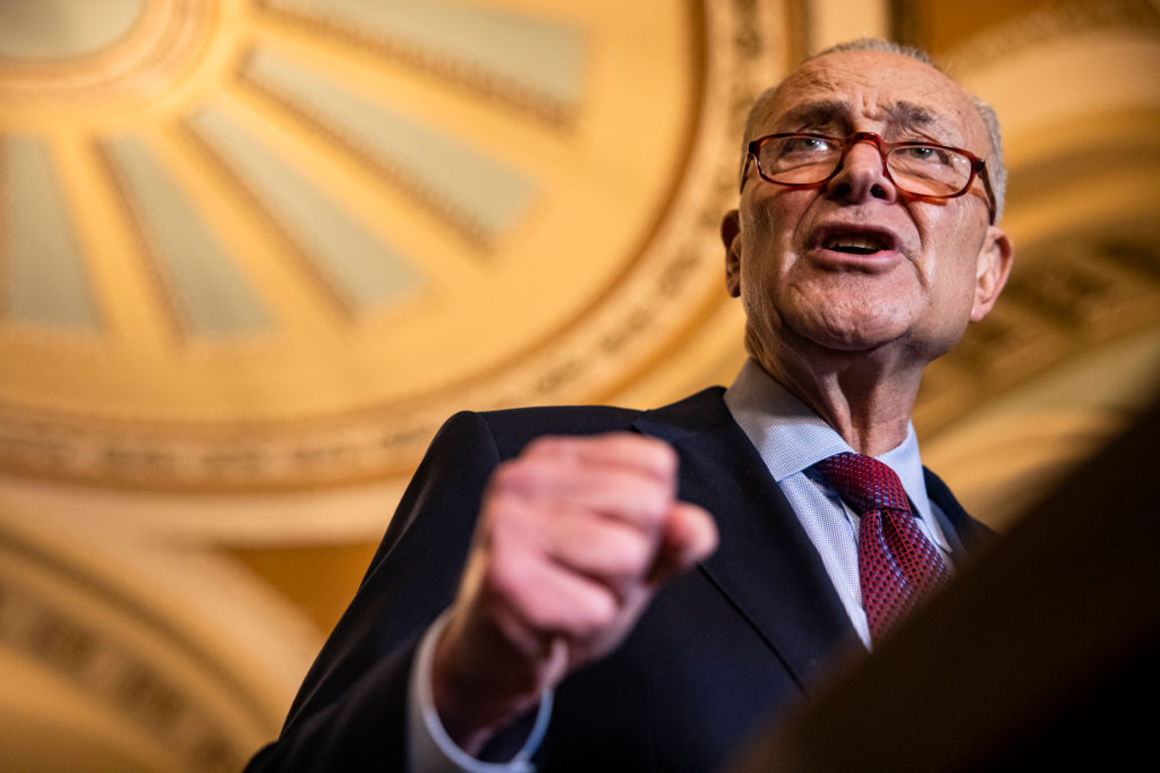 The latest version of the $1.75 trillion plan includes $65 billion to shore up government-built apartments across the country, accounting for 43 percent of the $150 billion housing portion of the bill. Democratic aides expect much of it will go to the New York City Housing Authority and its estimated $40 billion repair backlog.

While there is wide agreement that public housing has fallen into dangerous disrepair, its prioritization has irritated some affordable housing advocates who argue that Biden’s signature “Build Back Better” plan should do more to address skyrocketing home and rental prices, which are becoming a broader economic burden. The proposal is also facing a potential threat from Senate Republicans, who are weighing a procedural move to strike the public housing spending. Sen. Pat Toomey (R-Pa.) has dubbed it a “Schumark” and warned that New York’s housing authority has suffered from long-term mismanagement.

“My concern with leaning into things like public housing as opposed to the supply shortage is it’s not the best use of the resources,” former Obama White House economic adviser Jim Parrott said. “If you don’t address that problem aggressively, all these other needs will linger, if not get worse.”

The jockeying over the housing funds is one of many emerging sources of political tension surrounding Biden’s bill, after moderates including Sen. Joe Manchin (D-W.Va.) forced Democrats to slash what was originally a $3.5 trillion plan.

The stakes are high for the 2 million people who reside in 1.2 million public housing units receiving federal funding, with many living in substandard or even dangerous conditions. The cost of the nationwide need for repairs is $81 billion, according to the National Association of Housing and Redevelopment Officials.

The $65 billion allocation is 63 percent more money than Biden proposed for public housing in the spring. After Biden released a plan with $40 billion for improvements, Schumer vowed in April that it would be among his “No. 1 priorities” to double that figure and direct money to the New York City Housing Authority.

“This is what happens when the New York congressional delegation works together,” said Rep. Gregory Meeks (D-N.Y.), adding in an interview that “Sen. Schumer played a significant role.”

President Franklin D. Roosevelt enacted the public housing system in 1937, as a way to subsidize the construction and operation of multifamily rental housing for Americans with low incomes in the wake of the Great Depression. It was the first major federal rental housing assistance program.

The federal government stopped funding the development of new public housing in the mid-1990s as other forms of housing assistance — including vouchers to subsidize rent in private dwellings — rose in popularity. Then-President Bill Clinton declared that “the era of big government is over,” and public housing, like other federal aid programs, became a target for major overhauls in the larger welfare reform debate.

A 1998 law prohibited public housing authorities from using federal money to develop new public housing units and required the Department of Housing and Urban Development to come up with a new formula for distributing operating funds.

Schumer warned in a September op-ed of a “humanitarian crisis” in public housing developments across New York City. The New York City Housing Authority is the largest and oldest public housing operator in the country, home to about 400,000 low-income residents who have seen conditions decaying for years. The New York State Department of Health reported in 2018 that 83 percent of the NYCHA units and 75 percent of the common areas it inspected had at least one severe condition that could pose a health hazard to tenants.

“Due to decades of disinvestment, many of the New York City Housing Authority’s properties have fallen into such a state of disrepair that the only solution is through big, bold and transformative action by the federal government,” Schumer said in the op-ed, citing residents’ exposure to lead and mold, faulty heating and cooling, and broken elevators.

Meeks, who grew up in a NYCHA building, said the additional funding “would mean that individuals have an opportunity to live in a clean and decent place.”

“I’m a product of public housing,” he said. “I know how significant and important it was for me.”

Rachel Fee, who advocates for affordable housing as executive director of the New York Housing Conference, said NYCHA has been plagued by “deteriorating living conditions that are unacceptable.”

“We’re really grateful that Sen. Schumer sort of drew a line that this housing funding had to be in the bill,” she said. “Pressure from progressives has helped make this a top housing issue in New York, and that has yielded pretty significant results.”

NYCHA has also faced fraud accusations in recent years. One city investigation found in 2017 that officials at the housing authority falsified paperwork saying units had been inspected for lead paint hazards when they had not. More than 800 children were later found to have elevated levels of lead in their blood. The Trump administration and city officials reached an agreement in 2019 to appoint a monitor to oversee the authority in a deal to stave off a complete federal takeover.

The mismanagement claims have made the proposed $65 billion in repair funding a prime target for Republicans, who are campaigning against Biden’s overall Build Back Better plan.

GOP senators are considering using a procedural tool to block the public housing investment, Senate aides familiar with the discussions said. Republicans see an opening because Democrats are attempting to pass the legislation with their majority alone using budget reconciliation. The law governing the process allows lawmakers to kill proposals that are extraneous to the budget.

“It appears half of all the bill’s public housing dollars will go to a housing authority plagued by scandals, bribery and chronic mismanagement,” Toomey said last month in a hearing.

Even some housing experts sympathetic to the need for repairs are questioning whether it makes sense to prioritize them over other programs that could address the broader housing affordability crunch in the U.S. They argue that other affordability measures in the bill should be expanded, including investments in the Housing Trust Fund to spur construction.

The housing supply shortage “is at the root of every housing ill,” exacerbating the racial wealth gap and fueling demand for housing subsidies, said Parrott, who led an Obama White House team that advised the administration on housing.

Parrott and Moody’s Analytics chief economist Mark Zandi wrote in a CNN op-ed last month that “if policymakers don’t address the supply shortfall, they won’t deal with the underlying problem: that so many need subsidized housing in the first place.”

“We’ve no doubt underfunded both public housing and vouchers,” Parrott said in an interview. “But we’ve got a finite amount of money to go around.”