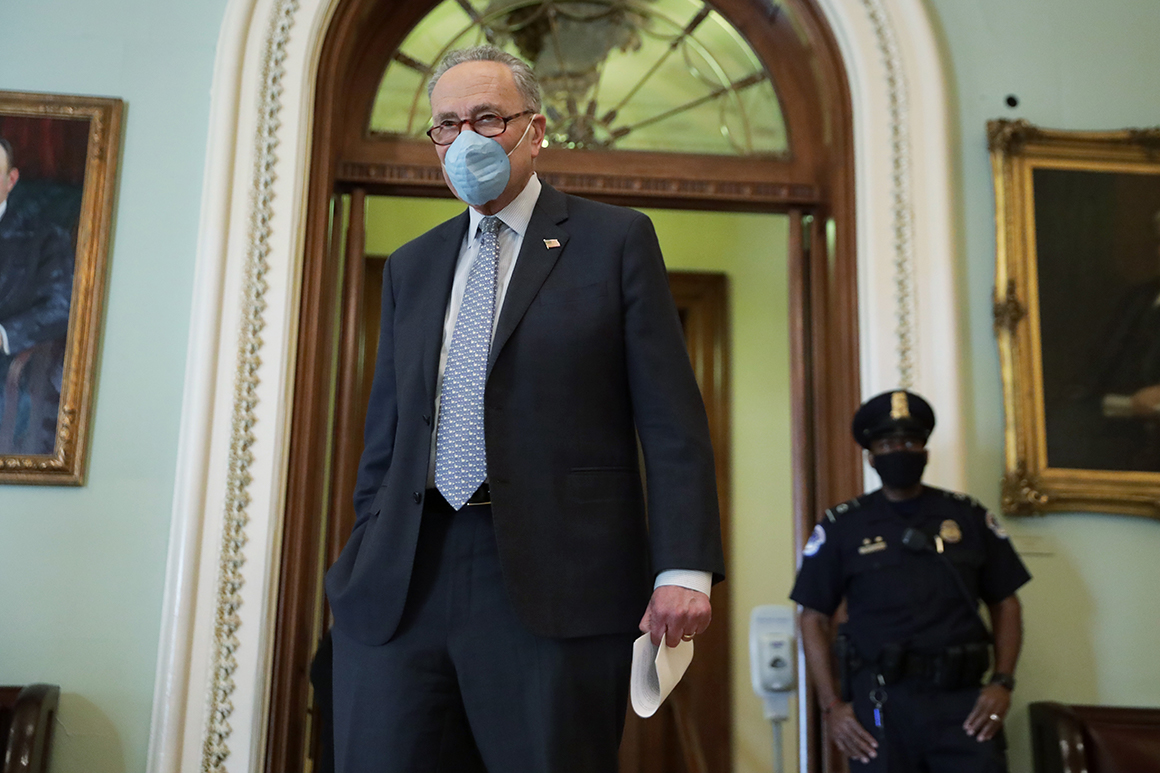 With Congress reconvening Monday and the House still working to pass the massive climate, safety net and tax package, the Senate will likely turn instead this week to the massive annual defense policy bill, Senate Majority Leader Chuck Schumer said Sunday. That’s because even if the House passes the so-called budget reconciliation bill this week, there’s still work to do to ready the legislation for the Senate floor.

The House passed the Senate’s infrastructure bill earlier this month but left without passing the reconciliation bill. And with Democrats focused on clinching a big spending deal on the effort to fight climate change, install universal pre-K and raise taxes on the wealthy and corporations, the National Defense Authorization Act has stalled in the Senate thus far. It’s one of the few bills Congress passes every year; the House passed its version in September.

“Due to the House pushing back consideration of the [Build Back Better Act ] to the week of November 15th, it is likely that the Senate considers the NDAA this upcoming week as we await House passage of the BBBA,” Schumer told Democrats in a Dear Colleague letter on Sunday morning. After one week in session, Congress is scheduled for a Thanksgiving break next weekend.

The move toward NDAA on the Senate floor in the coming days makes it all the more likely Congress will be working well into December to finish out Biden’s domestic agenda. The Senate parliamentarian needs to go through the reconciliation bill before bringing it to the floor, making sure none of the the language runs afoul of the bill’s protections from a GOP filibuster. Schumer said he hopes to finish that process this week.

Senators will also begin meeting with the parliamentarian this week to debate whether key components of the bill have a direct budgetary effect, called a “Byrd Bath.” Some House moderates want a full Congressional Budget Office score for the legislation before voting; some of that information will arrive this week. Sen. Joe Manchin (D-W.Va.) has also said he wants more fiscal information about the bill’s impact before moving forward.

“On a bill of this magnitude, this process takes time and patience,” Schumer said Sunday. “Timing of consideration of the BBBA in the Senate will largely depend on when the House sends us the bill and when CBO finalizes their scores for all of the committees, which are needed to complete the ‘Byrd Bath’ process.”

Unlike other legislation that requires 60 votes to advance, the reconciliation bill needs just a simple majority to pass the Senate, though there are strict rules on what can be included. Schumer also needs lockstep unity from all 50 Democrats to support it, and Manchin has made it clear he’s in no rush as he raises concerns about increasing inflation.

However, Brian Deese, a top economic adviser to Biden, called for quick congressional action in the face of inflation.

Americans “are looking for us to deliver on the things that matter most in their lives,” Deese said on ABC‘s “This Week“ on Sunday.

Senate Democrats also have to prepare for a vote-a-rama, an opportunity for unlimited amendments on the legislation that could test Senate moderates’ support for key components, like paid leave.

Though reconciliation continues to hang over Schumer’s caucus, moving to NDAA will pacify some restive Democrats. House Armed Services Chair Adam Smith (D-Wash.) has criticized Schumer for not moving more quickly to the bill, and several Democrats on the Senate’s Armed Services Committee have privately lobbied Schumer for action.

What’s more, action on NDAA will probably help move forward a big Schumer priority: the competitiveness bill Schumer began pushing through Congress this spring. That bill has yet to pass the House, but Schumer confirmed the Senate may put it in the must-pass defense bill as an amendment to force negotiations with the House.

Schumer conceded that the Senate will need to pass a stopgap funding bill to avoid a government shutdown after Dec. 3 and possibly need to address the debt limit next month as well. In addition, he said votes on Biden’s nominees will continue, sometimes at “inconvenient times.”

With holidays looming and tons of work to do, Schumer asked Democrats to “keep your schedule flexible for the remainder of the calendar year. … I am confident we can get each of these important items done this year, but it will likely take some long nights and weekends.”