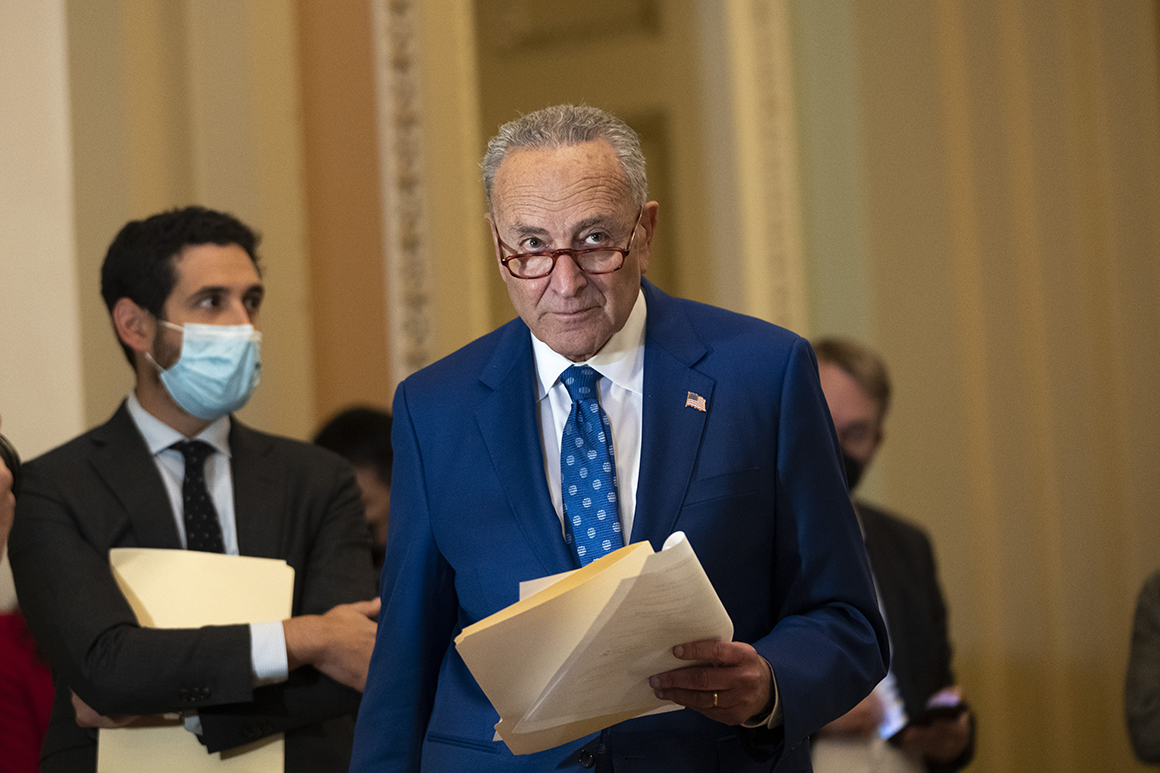 Senate Majority Leader Chuck Schumer is urging senators to speed up debate on the annual defense policy bill so that amendment votes can kick off as early as Thursday.

On the floor, the New York Democrat reupped his calls for Republicans to agree to hasten the process so that the National Defense Authorization Act can be finished ahead of Thanksgiving.

“With Republican cooperation we can adopt the motion to proceed and begin voting on amendments early today,” Schumer said.

“We should work together and complete this important bill before the Thanksgiving holiday,” he added.

Quickly starting debate and voting on amendments requires both parties to sign off. It’s not immediately clear how soon a bipartisan agreement on amendments may be struck.

GOP sounds off: Republican Leader Mitch McConnell of Kentucky, meanwhile, laid out his party’s own designs — including votes on amendments that would impose sanctions related to the Russian-built Nord Stream 2 pipeline, supply Ukraine with more money for weapons and clarify that Afghanistan aid cannot flow to the Taliban.

On the floor, McConnell delivered a partisan broadside against President Joe Biden and Democrats, rapping the administration over the U.S. withdrawal from Afghanistan and Taliban takeover and keeping pace with Chinese military modernization, among other issues.

“I’m glad we will finally be able to have these debates and these votes,” McConnell said. “America needs a course correction and the Senate needs to supply it.”

Where NDAA stands: The Senate voted 84-15 Wednesday evening to hasten the start of debate on the bill, but a vote to formally begin debate hasn’t been scheduled.

Democrats and Republicans spent most of Wednesday haggling over the contents of a potential substitute amendment to the bill, with the parties at odds over a push by Schumer to include major U.S.-China competitiveness legislation. GOP senators had warned they would oppose procedural votes if Schumer pushed to include the measure without a standalone, up-or-down vote.

House Democratic leaders also oppose aspects of the China bill, making injecting it into the defense legislation a risky gambit.

The logjam was resolved when Schumer and House Speaker Nancy Pelosi agreed to separately negotiate a China bill outside of the NDAA process.

Democrats are eyeing weekend work, or potentially cutting into next week’s Thanksgiving recess, to finish work on the defense bill.

AUMF debate: The Democratic leader also underscored the need to vote on an amendment to repeal the 2002 Iraq War authorization. The move to repeal the law, along with other decades-old war authorizations, as a first step in reclaiming congressional prerogatives on war powers has gained bipartisan support.

Despite the bipartisan appeal of scrubbing the outdated Iraq authorization, McConnell dinged the push as a move that would give the U.S. less military flexibility in the Middle East.

“I expect a robust debate about that,” McConnell said.