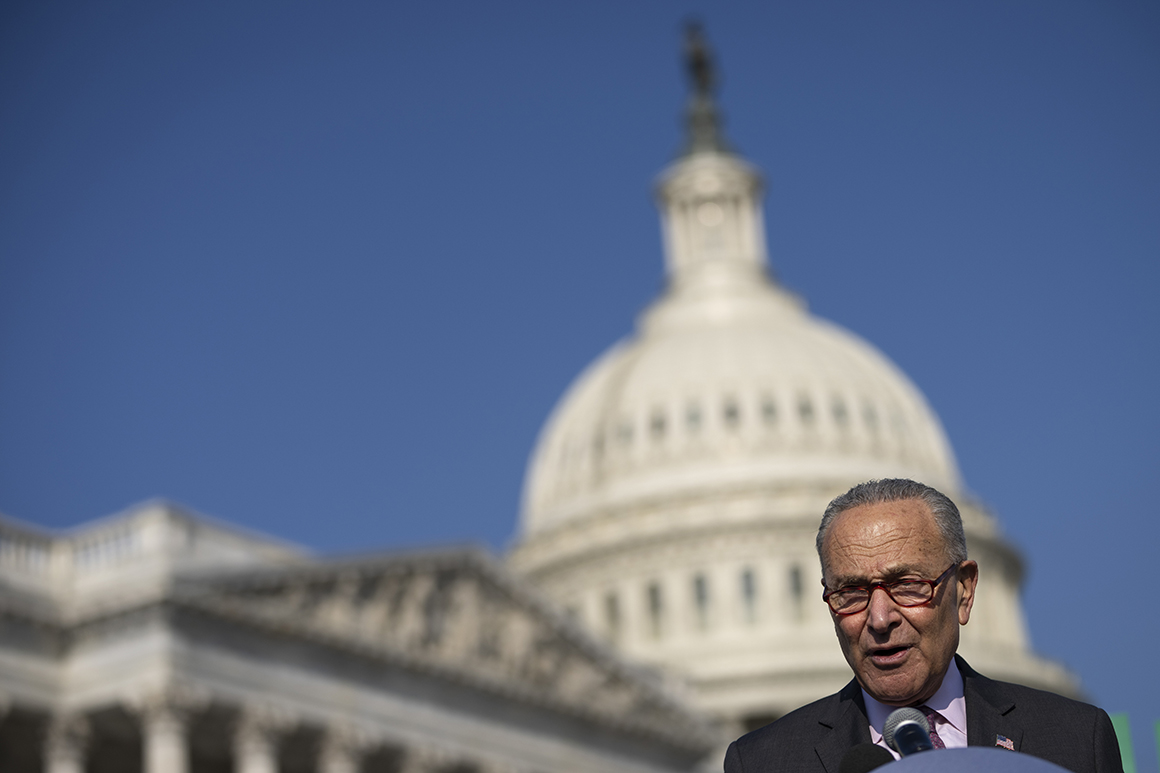 The agreement comes after Senate Republicans and some House Democrats objected to Schumer’s push to unilaterally attach the China legislation to the must-pass defense bill, creating an impasse that halted the Senate’s already-delayed action on the National Defense Authorization Act.

“While there are many areas of agreement on these legislative proposals between the two chambers, there are still a number of important unresolved issues,” Schumer and Pelosi said in a joint statement, adding that both chambers “will immediately begin a bipartisan process of reconciling the two chambers’ legislative proposals so that we can deliver a final piece of legislation to the president’s desk as soon as possible.”

The Schumer-led U.S. Innovation and Competition Act passed in the Senate with bipartisan majorities in June, but has stalled in the House, where committee chairs have sought to change the legislation but have made little progress in recent months.

And with the legislative calendar thinning, Schumer was pushing to attach the measure to the defense policy legislation in a last-ditch bid to send it to President Joe Biden’s desk before year’s end — or at the very least, jump-start the negotiations.

Later Wednesday, Schumer and Pelosi agreed to resolve the two chambers’ differences through a conference committee, effectively de-linking the China bill and the defense legislation.

The pact means the Senate is now clear to vote to advance debate on the defense bill as early as Wednesday evening.

The disagreements threatened to further stall Senate action on the defense bill, which has passed Congress each year for the last six decades.

“It’s certainly a little mystifying why the House doesn’t see the same urgency we do on building a coherent China policy,” Sen. Chris Murphy (D-Conn.) said earlier Wednesday. “I think we’ve been waiting all year for the House to put together a process that at least creates a version of USICA that could get us to [a conference committee]. My feeling is some of us are kind of done waiting.”

The Senate spent much of Wednesday negotiating the contours of the defense policy bill. Schumer’s push to include the USICA in a planned manager’s package of bipartisan and largely uncontroversial amendments forced senators to shelve a procedural vote to advance the defense bill, which was initially set for Wednesday morning.

“Trying to get together what’s in that package up front is the key,” Senate Foreign Relations Chair Bob Menendez (D-N.J.) said of the delay.

In their joint statement, Schumer and Pelosi blamed Senate Republicans, saying that after they “made it clear they would block the inclusion of USICA on the NDAA, we have decided that the best way to get an agreement will be through the conference process.”

The USICA would authorize funding for scientific research and development as a way to counter China’s technological advancements, and it also outlines new spending to boost the U.S. semiconductor industry, which has lagged amid the recent supply chain backlog. The bill, costing a total of $250 billion, is the culmination of Schumer’s longtime interest in confronting an increasingly aggressive Beijing.

Sen. Jim Inhofe of Oklahoma, the top Republican on the Senate Armed Services Committee, said earlier Wednesday that GOP senators were prepared to vote against the procedural motion on the defense bill if Schumer tried to add the China legislation without holding a separate vote on it.

“We’re not ready for a motion to proceed until we know what we’re proceeding to,” Inhofe told reporters. “It’s just an unnecessary obstacle. … That’s what’s holding it up now. It’s Schumer doing something unprecedented in as long as I can remember.”

Sixty votes are needed to advance the defense bill.

The rift over the China bill was yet another source of tension between the House and Senate. And Democrats are feeling increasing pressure to pass a host of priorities before the end of the year — including Biden’s social spending bill — with little time left and no margin for error.

Top House Democrats — who have not yet passed their own comprehensive version of the China bill — had expressed reservations about being forced to swallow the Senate legislation in its entirety as part of the annual defense legislation.

“The House has to have a voice,” House Foreign Affairs Chair Gregory Meeks (D-N.Y.) said in a brief interview Wednesday. “And the best way to have a voice is to pass something here. … And hopefully [Schumer will] see that also and push back, and understand we’re not going to allow something to be just jammed down our throats.”

In a letter to colleagues this week, Schumer wrote that there was broad bipartisan support in the Senate for including the legislation in the defense policy bill, which he said would enable negotiations with the House “to be completed alongside [the defense policy bill] before the end of the year.”

Senators who backed the China package this summer were largely supportive of Schumer’s push to attach it to the defense bill, despite House Democrats’ reluctance — especially given the dwindling number of legislative days left on the calendar.

House Armed Services Chair Adam Smith (D-Wash.) was also on board with including the China bill in the broader defense measure, but he warned that “a lot of logistics and a lot of details” needed to be worked out among his fellow committee chairs for the gambit to succeed.

For Smith, who publicly feuded with Schumer over the Senate’s inaction on the defense bill, the dust-up is evidence that the upper chamber should’ve acted weeks, if not months, ago.

“I’ve told folks that if you want to play a drinking game with me, for the next month … drink every time I say, ‘That’s why we should’ve done this sooner,’” Smith said.

“And you can start right now,” he said. “We should’ve done this sooner.”