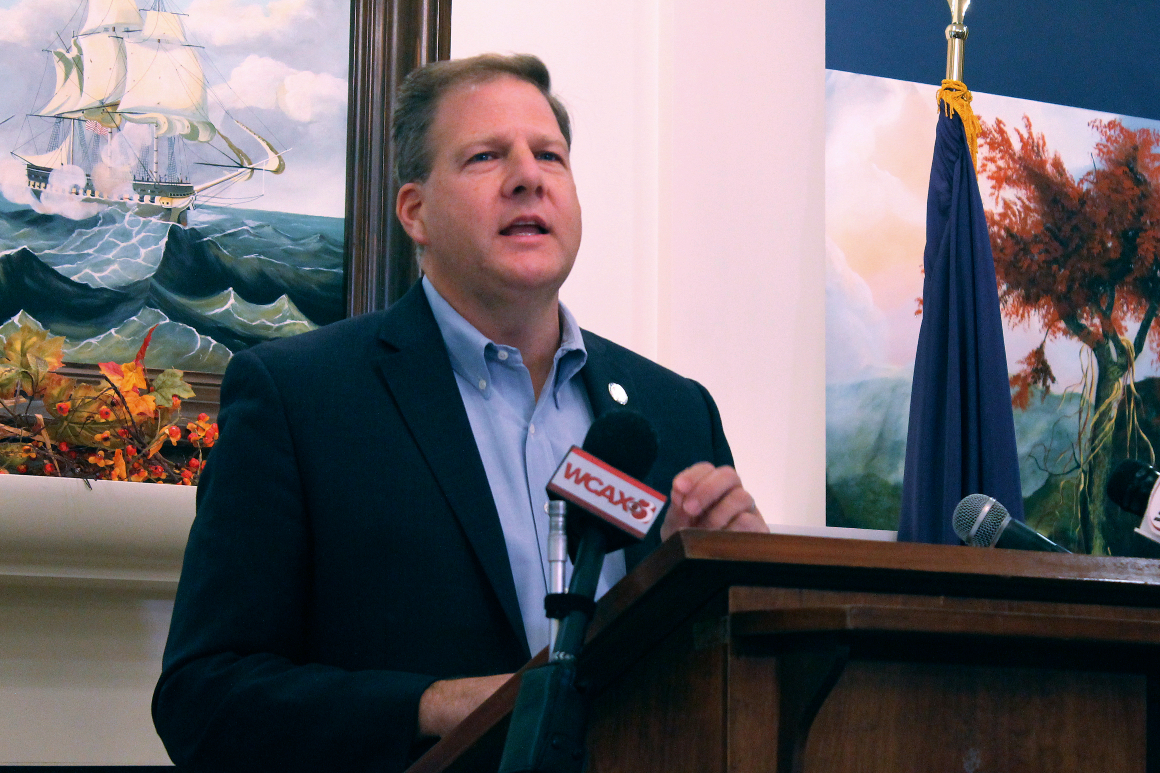 Mitch McConnell and Rick Scott found out the same way everyone else did that their top recruit to help secure the Senate majority was a no-go: They saw it on a local television livestream.

After months of courting Gov. Chris Sununu to run for Senate — a campaign that strategists believed would have been a slam-dunk for Republicans as they angle to win back Senate control — the New Hampshire Republican unexpectedly dashed party hopes Tuesday. Not only that, he insulted the Senate in the process, thoroughly ruining what was otherwise expected to be a triumphant day for the GOP.

Sununu, grinning as he spoke to reporters in Concord about how much he loves his current job, even used the opportunity to tease a potential presidential run.

“It’s hard to recruit a governor to go down and do nothing,” said Dave Carney, a New Hampshire-based national Republican consultant. “I think the approach by Washington folks recruiting was more on ego and thinking about how great he’d be, rather than talking about the bread and butter of what he was going to accomplish.”

The unfolding of the much anticipated announcement left top Senate Republicans blindsided and miffed. A trip to Las Vegas over the weekend, where Sununu joined other Senate hopefuls at the Republican Jewish Coalition conference, only increased speculation his arrival in the race was imminent. He told reporters he would have news this week.

McConnell, the Senate minority leader, and Scott, chair of the National Republican Senatorial Committee, were not given a heads up about Sununu’s announcement, aides confirmed.

Sununu acknowledged Tuesday that he had remained on the fence about his decision in recent weeks. And while many D.C. insiders interpreted Sununu’s decision-making process as merely a question of when, not if, he would launch his Senate campaign, the governor had previously expressed concerns about taking on the role of senator.

After Scott during an August visit to New Hampshire expressed confidence that Sununu would want to “get to D.C. and make a big difference there,” Sununu told a Concord Monitor reporter that wasn’t exactly his thinking.

“I’m not beholden to anybody in Washington D.C.,” Sununu said later that day. “If I were to go down to Washington, I’ve got to make sure my skill set fits it, make sure that they understand I would have certain expectations to move things forward, to actually get stuff done. And I’ve been critical of Republicans as well as Democrats on their unwillingness, sometimes, to move the dial in Congress and the Senate.”

Still, the announcement that he would seek a fourth two-year term as governor caught Republicans off guard. Asked by reporters how McConnell and Scott took the news, Sununu acknowledged he did not alert them to his decision.

“I guess you’ll have to let them know. I haven’t talked to them,” Sununu said, adding that he had no desire to leave his current role to “slow down and end up on Capitol Hill debating partisan politics without results.”

Sununu’s decision to heighten the drama surrounding his decision didn’t help — or win the governor many friends in Washington, where Democratic Sen. Maggie Hassan is viewed as highly vulnerable. Hassan’s favorability rating has fallen to 33 percent and she trailed Sununu in a head-to-head matchup, according to an October University of New Hampshire poll.

“The takeaway was this was handled so poorly,” said one Republican operative familiar with how Sununu’s announcement was received by McConnell’s team. “He publicly flirted with it. He hyped it up as this big announcement to the national press, and then bailed in a way that hurts the party’s momentum after a big week in Virginia last week.”

The 2022 cycle wasn’t the first time the NRSC had tried to recruit Sununu to run. They also did so ahead of the 2020 election for New Hampshire’s other Senate seat. Sununu made clear at the time he wasn’t particularly interested, but was intrigued enough not to immediately rule it out, according to a person familiar with Sununu’s thinking in 2019 about Senate recruitment.

Deflated aides and strategists exchanged texts and calls throughout the day Tuesday about the news, a blow that appeared to expose the fragility of Republican confidence in their Senate prospects even after the party saw major gains in Virginia and New Jersey.

The GOP can’t just bank on an advantageous political environment, strategists say. The party actually has to have the right candidates — a particular concern among party operatives who worry about the checkered pasts of Republican frontrunners in several key Senate races.

Sununu, the son of a former White House chief of staff and brother to a former senator, was viewed as a reliable quantity — already vetted, widely recognized and a veteran of several statewide runs.

In contrast Tuesday, Sean Parnell, the Trump-endorsed frontrunner in Pennsylvania’s Republican Senate primary, was attending his second week of court hearings as part of an ongoing child custody dispute with his estranged wife. She has accused him of assaulting her and her children, an allegation he denies.

“People are demoralized. People are saying, ‘This is devastating. What’s our plan?’” said another Republican operative, referring to conversations he had throughout the day. “Everyone is kind of like, ‘What are we doing here? What is going on?’”

The Sununu tease amounted to a “recruiting failure,” as another McConnell ally put it, adding that Republican leadership has yet to land a successful recruit for 2022.

Their next best hope is Arizona Gov. Doug Ducey — a longshot recruit who has already said he isn’t interested in running for Senate, and who remains in Europe on a nearly two-week trip celebrating his wedding anniversary.

Carney, a longtime family friend and former aide to Sununu’s father, former GOP Gov. John Sununu, on Tuesday said Sununu has been in talks with other potential Republicans who might take his place against Hassan. Republican Don Bolduc previously announced his candidacy.

“I know the governor has had conversations with two people, and I think one of them will take the plunge,” Carney said, declining to share any name. “New Hampshire is going to have an excellent election cycle in 2022, with Sununu leading the ticket.”