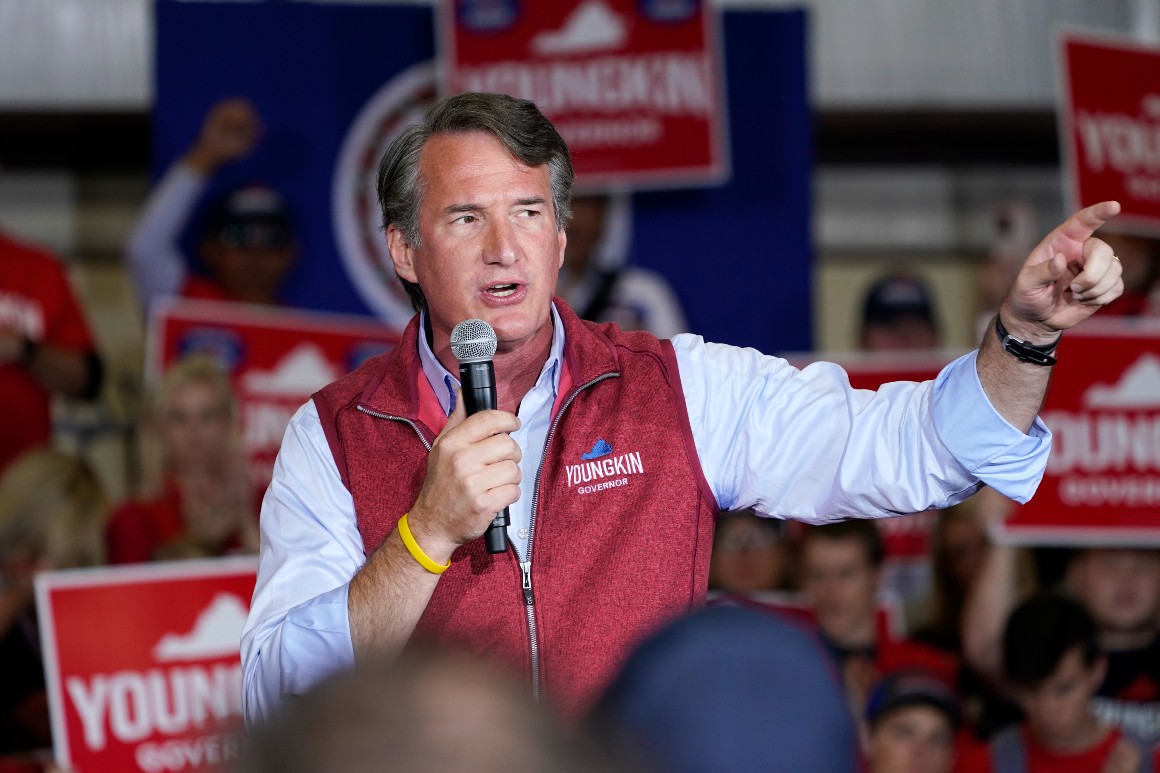 LEESBURG, Va. — The Virginia governor’s race is coming down to momentum against math.

Glenn Youngkin, the GOP nominee, has been surging in the polls in the run-up to Election Day. But former Gov. Terry McAuliffe is the Democratic candidate in a state President Joe Biden carried by 10 points only a year ago.

Whether Youngkin’s momentum can overcome the state’s increasing partisan lean to the left is the central question of the race, and it will be tested acutely here in Loudoun County, the sprawling home to Washington outer-ring suburbs and exurbs.

In a clear sign of his campaign’s big bet on Loudoun — which went Democratic by nearly 20 points in the last gubernatorial election — Youngkin closed out his campaign here Monday night, with a rally at the county fairgrounds that drew roughly a thousand supporters.

“We are going to win Loudoun County tomorrow,” he boasted to the crowd, in shirtsleeves and wearing his signature logoed vest despite temperatures dipping into the 40s. “How amazing is that going to be? Wake up Virginia, here we come, because we’re going to win this tomorrow.”

Cutting into those yawning Democratic margins is key to Youngkin’s chances. Here are five big things we’re watching in Virginia on Tuesday.

The Republican Party has now failed to crack 50 percent in suburbia in four consecutive presidential elections, according to exit polls.There’s no question Trump has accelerated the party’s suburban erosion, but it’s not entirely clear how far the rot has spread.

Youngkin’s performance in Northern Virginia and in the suburbs of Richmond and Virginia Beach will provide some clues — perhaps the best evidence before the midterms of the post-Trump GOP’s standing in the suburbs.

Unlike Trump, Youngkin has run as a more traditional suburban Republican, framing himself as a fleece-quarter-zip-wearing suburban dad focused on education and law and order. Recognizing Trump’s weakness in the Virginia suburbs — Joe Biden carried them in 2020, 53 percent to 45 percent, according to exit polls — Youngkin has kept his distance from the polarizing former president.

McAuliffe and Democrats, however, have relentlessly portrayed Youngkin as a Trumpian extremist.

If Youngkin can remain competitive in the suburbs — especially in populous exurban Loudoun and Prince William counties, where Biden ran up the score — he will have proved that there is life after Trump for suburban Republicans. The trick is just to thread the needle between the Trump-loving GOP base and the suburbanites who recoil at the thought of him.

Trump Country under the microscope

The flip side of cutting down McAuliffe’s margins in the vote-rich suburbs: turning out the Republican base of Trump fans in rural areas.

Take Virginia’s 9th Congressional District — the “Fighting Ninth,” as it’s been known the past century — which stretches from the outskirts of Roanoke to the southwestern tip of the state. Like many rural areas throughout the country, it’s gotten redder over the past decade: McAuliffe’s GOP opponent in 2013, Ken Cuccinelli, got 61 percent there, but Trump took 70 percent last year (while losing the state by a much bigger margin than Cuccinelli did).

Republicans are counting on strong Election Day turnout in their strongest areas. Of the state’s 11 congressional districts, the Fighting Ninth saw the lowest total of in-person early and absentee ballots cast. Youngkin needs the district to come out in force on Tuesday.

First, Washington exported its toxic politics to state capitals. Now, it has reached all the way down to the local level — to neighborhood school board races, which have become as bitterly fought as any national contest.

That’s because education has emerged as the latest front in the culture wars, marked by contentious battles over issues including Covid policies, the rights of transgender children, critical race theory, school safety and the rights of parents to be involved in their children’s education.

Those same issues have roiled the Virginia governor’s race, where Youngkin has zeroed in on progressive education policies and curricula in an attempt to tap into parent anger, particularly in the suburbs.

The GOP is closely watching Youngkin’s performance in a place where no Republican has won statewide since 2009 — a GOP victory would likely make his campaign a template for Republican candidates across the country next year.

The only two debates between McAuliffe and Youngkin came in September, and the Democratic nominee spent much of those meetings hammering Youngkin for opposing mandates that public employees and workers at private businesses be vaccinated against the coronavirus.

But since then, the issue has slipped from the forefront. A Washington Post-Schar School poll released last week found only about one-in-10 voters said it was their most important issue. And polling itself on mandates for all employees is mixed — though majorities continue to say that health care workers and teachers should be required to get the shot.

Replacing Covid, according to public and private polling? Education has surged, as have economic issues, including the cost of living. According to AAA, the average price for regular unleaded gasoline in Virginia is $3.29 a gallon, up about 30 cents over the past month.

The governorship isn’t the only thing up for grabs

Democrats are seeking to protect not only the governorship in Virginia, but also their control over all of state government.

Most strategists expect little variation in the results for the three statewide elections up on Tuesday: governor, lieutenant governor and state attorney general. If the top of the ticket is extremely close, split decisions are certainly possible — but the greater likelihood is one party sweeps all three races.

Like in Congress, Democrats currently hold slim majorities in Virginia’s state legislature. Only the state House is up on Tuesday: Democrats enter with a 55-45 majority, but a Youngkin victory could create coattails that boost GOP candidates down-ballot.

And while the 40 state senators are not up for reelection this year, Democrats’ current, 21-19 majority includes one incumbent with a history of bucking the party on major votes (and a series of ethical and criminal issues): state Sen. Joe Morrissey. If Republican Winsome Sears defeats Democrat Hala Ayala for lieutenant governor, Sears could break ties in the state Senate in the event of a 20-20 vote.