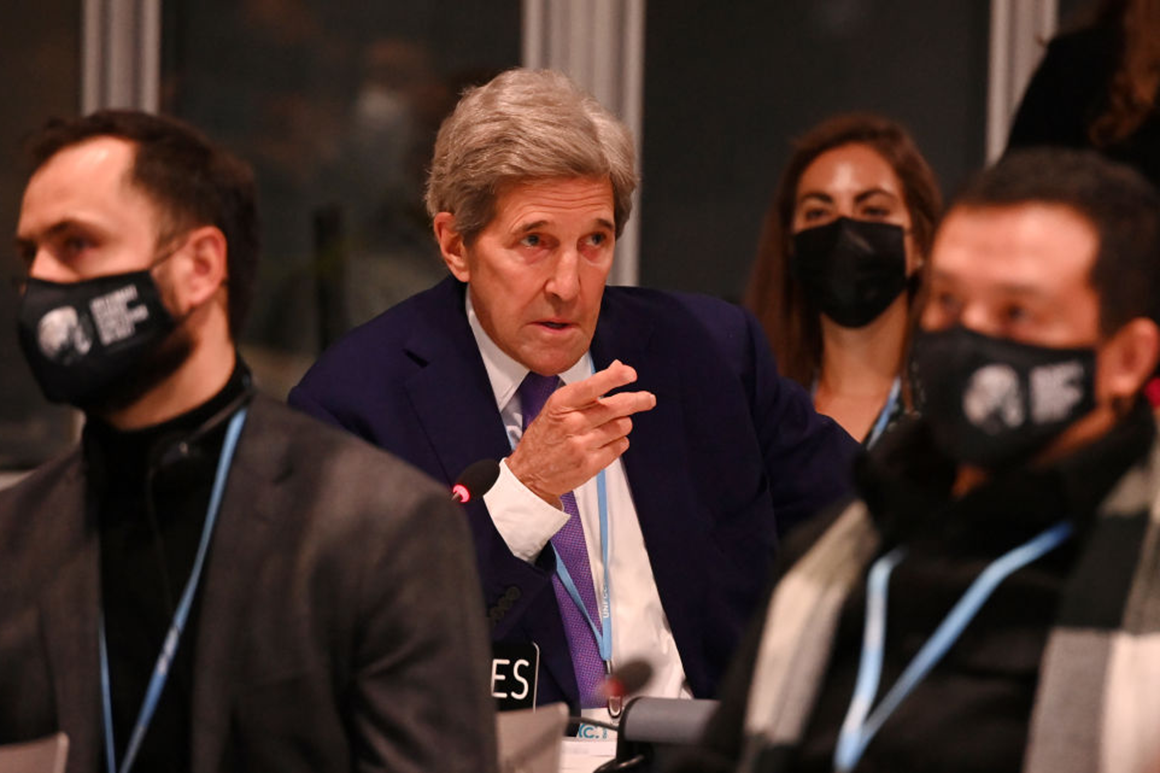 After four years of taking a back seat in the global effort to combat climate change, the U.S. stepped into the spotlight here, helping secure an agreement to advance the promises set out under the Paris Climate Agreement, even though many nations said the final pact still fell short of what’s needed to avert a crisis.

“United States took this seriously, as we should after the previous administration was absent during their time in the White House,” Kerry told a Saturday night press conference.

While the world’s No. 2 greenhouse gas polluter wielded its diplomatic leverage and frequently overshadowed its U.K. government hosts, the U.S. failed to persuade China into making a firm vow to increase its climate change ambition. And the U.S., like other major economies, acquiesced to demands to soften a call to “phase down” use of coal, rather than eliminate use of the fuel most responsible for climate change. Still, the presence of the U.S. helped drive the urgency at the talks, delegates said, particularly after the four years of the Trump administration when the U.S. largely ignored the issue.

“There’s a great difference,” Spanish Minister for the Ecological Transition Teresa Ribera said in an interview, referring to the renewed U.S. push. “Of course, it is going to require higher ambition and domestic plans in the U.S., not only in the emerging economies.”

The U.S. re-entry to the playing field brought some “pizzazz” to the talks, Halima Bawa-Bwari, an environmental scientist at Nigeria’s Department of Climate Change and one of the country’s negotiators, said as she watched Kerry “crisscrossing the room all evening.”

Even in the waning moments before the final agreement was sealed, Kerry could be seen shuttling between the Chinese and Indian delegation to quash disagreements about language calling to phase out most fossil fuel subsidies and coal-fired electricity. It was a push by India and backed by many other developing countries that weakened the final agreement’s language around coal.

“You see there’s a big issue with China and India — it’s the U.S. at the heart of all that,” said a French official. “Is it the right deal that we’re getting? I don’t know.”

Kerry frequently took the tone of an activist during the 13-day event, deriding government subsidies for fossil fuels the “definition of insanity,” predicting the U.S. “won’t have coal” by 2030, and guaranteeing the U.S. would pass the Democrats’ reconciliation legislation that contains $555 billion in spending on climate-related measures.

But back home, U.S. lawmakers have shown little appetite for phasing out tax breaks for fossil fuels. And though the bipartisan infrastructure bill that Biden will sign this week contains more than $100 billion in climate-related measures, the passage of the larger $1.75 trillion climate and social spending bill is far from assured as Democrats argue among themselves. And despite Kerry’s remark about the end of coal in the U.S., the federal government has few mechanisms to close down the industry — which some Democrats, such as West Virginia’s Sen. Joe Manchin, adamantly oppose.

The U.S. has “lots more to do,” Jennifer Morgan, executive director with Greenpeace International, told POLITICO. “First thing is to have a domestic plan and a set of laws that phases out fossil fuel subsidies.”

Kerry did engineer one of the biggest surprises of the conference: a joint announcement with China that promised new cooperation with the world’s top polluter to take “enhanced action” to try to keep the world from warming by more than 1.5 degrees Celsius over pre-industrial era levels.

That’s as close as Beijing has come to moving off its stance that the world stick to the firm target of 2 degrees Celsius set out in the Paris Agreement. And China agreed to work with the U.S. to bring down releases of methane, even though the country didn’t join the 100 nations that announced a pledge to reduce by 30 percent by 2030 their releases of the gas that experts say is driving much of the near-term warming.

China, which has been the target of intense U.S. lobbying by Kerry on climate, was not shy about drawing distinctions between its approach to the issue versus Washington’s. Its diplomats complained to European delegates in private that the U.S. is not a reliable partner in the climate negotiations, according to people with knowledge of the conversations. And they pointed to the sharp reversal of Obama’s climate policy efforts under former President Donald Trump. And, the Chinese delegates noted, Biden and the Democrats could soon lose power, which could undermine any of the country’s new policies.

Even some members of the sizable U.S. congressional delegation that traveled to Scotland as a show of support to the climate effort acknowledged that the U.S. had not always been a reliable partner in the talks.

Although “we have not recovered our moral authority, I believe we are making steps,” Ocasio-Cortez told reporters on Tuesday, adding “we have to actually deliver the action in order to get the respect and authority internationally. We have to draw down emissions to get credit internationally.”

That view drew pushback from House Speaker Nancy Pelosi, who led the delegation to Glasgow just days after shepherding the bipartisan infrastructure bill to passage in the House.

“I don’t accept the fact that America has not assumed its moral authority in all of this. America is back. Our president was here,” Pelosi said at a Wednesday press conference.

Perhaps paradoxically, the heightened U.S. engagement also complicated some issue areas, particularly those around offering compensation to poor countries for the greenhouse gas pollution that U.S. has spewed since the dawn of the industrial age. Under Trump, U.S. officials were quiet on issues that other administrations previously might have blocked. “None of us wanted to draw attention to that fact,” the French official said.

Environmental advocates said the U.S. joined other developed nations in stifling efforts to create a compensation fund for loss and damage, which refers to harms from climate change-related events. The U.S. also resisted some efforts to more clearly establish a process for delivering more climate finance.

Still, despite some of those red lines the U.S. drew, it was better to have the country help to forge agreement rather than sitting on the sidelines.

Nations like Brazil, which took hardline positions that stalled carbon markets deliberations at the Madrid COP talks two years ago, said that U.S. engagement was essential to getting a deal done. Kerry had been in frequent contact with Brazilian officials, and the U.S. released a global forest plan last week that includes provisions to preserve the Amazon rainforest.

“We had very significant, very divergent positions a few months ago. But we did engage, I think together, with the view to finding an agreement,” Leonardo Cleaver de Athayde, Brazil’s chief climate negotiator, told POLITICO. “We moved, and they moved.”

While less than what developing nations hoped, the U.S. helped drive a goal for doubling finance for adaptation projects protecting people from climate change by 2025. And Washington did shift modestly by supporting technical assistance for loss and damage.

“The U.S. made its comeback felt,” said Kishan Kumarsingh, chief climate negotiator for Trinidad and Tobago. “They’ve been willing, for example, to engage on issues on loss and damage and on increasing finance. And particularly, I think their willingness to support phasing out coal and fossil fuel subsidies augurs well for the future.”