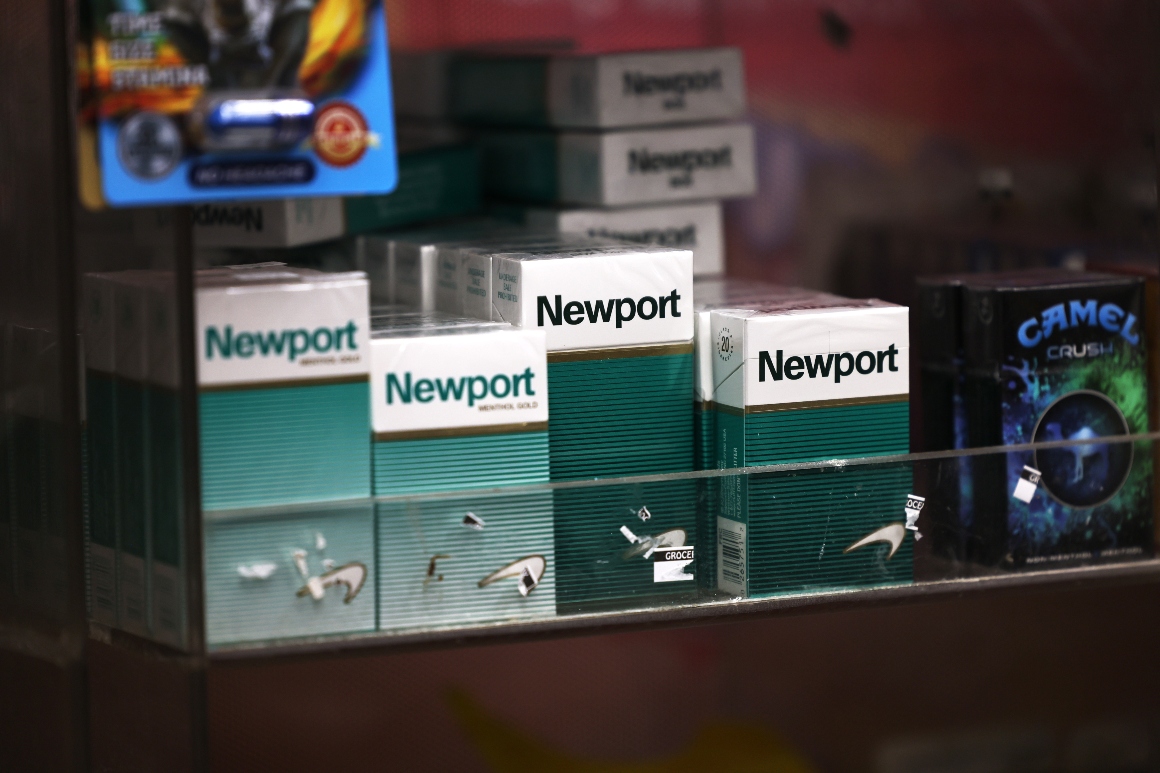 The Food and Drug Administration’s renewed push to regulate e-cigarettes could interfere with the Biden administration’s plans to ban menthol-flavored tobacco products, a long-sought goal of public health groups.

On Nov. 18, the agency will square off in a federal district court with anti-tobacco groups that say it has unreasonably delayed action to limit the minty flavor in tobacco products, despite ample evidence of menthol’s toll on public health.

An agency science advisory committee concluded in 2011 that menthol cigarettes were disproportionately popular with Black Americans, who have a higher rate of smoking-related disease and death than other groups do. The report also found that the flavor has strong appeal for new smokers and makes it harder to quit smoking.

But while the menthol cigarette suit is just revving up, the agency’s effort to decide which e-cigarettes can stay on the market could force it to confront the menthol question much sooner. FDA faced a court-ordered deadline in September to review all tobacco products introduced since 2007. It has banned millions of fruity flavored e-cigs and vapes but has largely avoided action on menthol varieties — including products from some of the largest e-cigarette companies. A renewed legal fight over the missed deadline could collide with the Biden administration’s plans to propose a wide-ranging ban on menthol tobacco products by April 2022.

It could also present an early challenge for Robert Califf, who President Joe Biden nominated on Friday to lead the agency.

“The FDA has put itself in a position of having sort of a tension between its action on menthol cigarettes and other kinds of flavored tobacco products — most specifically e-cigarettes,” said Joelle Lester, the director of commercial tobacco control programs at the Public Health Law Center in St. Paul.

An FDA spokesperson said the agency is developing a menthol policy and will finish its review of remaining e-cigarettes. But the agency has not made clear how it will handle the overlap between the two.

“Our commitment to ban menthol as a characterizing flavor in cigarettes and ban all characterizing flavors (including menthol) in cigars is at the top of this Administration’s tobacco regulatory priorities,” said a spokesperson from FDA. “At the same time, our commitment to addressing youth use of e-cigarettes and other electronic nicotine delivery systems [e-cigarettes] is unwavering.”

Menthol is one of the most popular flavors of tobacco products. It “helps the poison go down quicker,” said Erika Sward, the assistant vice president of national advocacy at the American Lung Association. By coating the throat with a soothing mint-like flavor, menthol masks the harsh flavor of burning tobacco.

As a result, public health researchers say that menthol cigarettes hook smokers on nicotine faster and makes it harder to quit. “It makes initiation easier,” said David Mendez, an associate professor of public health at the University of Michigan School of Public Health, who co-authored the Tobacco Products Scientific Advisory Committee report on menthol in 2011.

The tobacco industry, meanwhile, has consistently argued that available studies do not justify banning menthol-flavored products.

The battle over menthol dates to 2009, when Congress enacted the Tobacco Control Act, giving FDA the ability to regulate tobacco products. The law banned all flavored cigarettes, with the exception of menthol.

In 2013, over a dozen public health groups petitioned FDA to ban the flavor based on ample data showing the harm it caused — particularly among Black Americans. They disproportionately smoke menthol cigarettes compared to other demographics, largely because of decades of targeted marketing campaigns by tobacco companies. Some of the groups behind the petition sued FDA in 2020 to force it to act on menthol.

In the 1950s, only about 5 percent of African Americans who smoked used menthol, but by the mid 2000s, that figure was over 85 percent, said Phillip Gardiner, the co-chair of the African American Tobacco Control Leadership Council, and adjunct faculty member at Touro University in California.

“That was targeted marketing, free giveaways, money to organizations, jazz concerts and buying politicians,” said Gardiner, who has studied menthol’s toll in the Black community for decades. He and his colleagues at the AATCLC were among the plaintiffs who brought the menthol suit against FDA.

The consequences have been stark. A study released this year by Mendez and his colleague Thuy Le found that African Americans, who make up 12 percent of the U.S. population, comprised 50 percent of the total menthol-related deaths and disease from 1980 to 2018.

FDA said in April that it was beginning to draw up a proposal to ban menthol, in response to the citizen petition and subsequent lawsuit.

At the time, the agency cited one study that estimated banning the flavor would save up to 633,000 lives by 2050, including up to 237,000 among Black Americans. The agency pointed to a second study that projected 923,000 smokers, including 230,000 Black smokers, would quit within 13 to 17 months after a ban on menthol cigarettes.

Given its April announcement that it was moving toward a menthol ban, the agency wants the district court in California to dismiss the menthol suit. But it could take years for any ban to take effect, even if FDA meets its goal of introducing a proposed regulation by April 2022.

“We’re pissed off, frankly,” Gardiner said. “We can’t be stretching this out for another decade or so.”

At the same time, the agency is scrambling to assess the remaining applications from companies that want to continue marketing e-cigarettes and other novel tobacco products introduced since 2007.

FDA had until Sept. 9 of this year to evaluate whether applications for new tobacco products — most of which were e-cigarettes — were appropriate for the protection of public health. So far, the agency has gone through more than 98 percent of these applications and issued orders that removed millions of e-cigarette products off the market.

The agency has not acted on applications for menthol-flavored vapes, suggesting to some experts that the agency doesn’t want to pull menthol e-cigarettes from the market while menthol cigarettes are still available; such a move could backfire by driving menthol vapers to more harmful cigarettes.

Former FDA Commissioner Scott Gottlieb ran into the same issue during his tenure, when he took a hard stance against youth vaping and unsuccessfully tried to push for a menthol ban.

“We didn’t want to create a marketplace where an adult smoker goes into the store and could buy a mentholated cigarette but couldn’t buy a mentholated e-cigarette,” Gottlieb told POLITICO. “I wanted them to be parity between e-cigarettes and cigarettes, so we can still use them as tools to try to migrate those smokers off … tobacco.”

In 2020, when FDA banned flavored reusable e-cigarettes cartridges to help curb youth vaping, it excluded menthol and tobacco flavored products. The agency said that menthol requires “unique considerations,” which many anti-tobacco groups and health experts interpret as a sign the agency does not want to inadvertently steer menthol e-cigarette smokers toward traditional cigarettes.

“They’re saying, ‘Do we need menthol e-cigarettes on the market when we ban menthol cigarettes so menthol smokers don’t go to non-menthol cigarettes?’” said Eric Lindblom, a former official at FDA’s Center for Tobacco Products who is now a senior scholar at the Georgetown University Law Center.

Gottlieb describes menthol as the “third rail” of tobacco regulation. “If there was one issue that ended up igniting a political debate that got the White House engaged on what I was doing on tobacco was menthol.”

Even if lawmakers and White House officials supported other areas of Gottlieb’s tobacco regulation, he said “the efforts that I opened up on menthol probably ignited the most intense political fight that I had while I was at the agency on tobacco.”

“If you got rid of menthol, you’d tear the tobacco industry up,” said Gardiner.

That’s why historically, the tobacco industry has worked tirelessly to block the ban of menthol cigarettes. Most recently, lobbyists successfully stopped a proposed FDA rule on menthol from making it through the Office of Management and Budget.

Tobacco also has a powerful presence with lawmakers — some of whom hail from states with large industry presence.

Menthol e-cigarettes are popular across age ranges — including teens. Among all e-cigarette users, the sale of menthol-flavored pods grew in 2020 after FDA banned other flavors of e-cigarettes, like fruit. And a 2021 federal survey found that middle and high school students who vape named menthol as one of the most popular flavors.

Many other lawmakers are keen for FDA to take menthol e-cigarettes off the market because of their youth appeal. Several have pressured acting FDA Commissioner Janet Woodcock to crack down on all flavors of e-cigarettes, except tobacco, because of the risk that minors will become hooked. Menthol falls in this category because, as Woodcock said in a congressional hearing, menthol “makes it harder to stop vaping.”

“I think about all the young people who are all the families and parents — especially whose young people are now addicted to e-cigarettes — feel so much urgency about the problem of flavors, including menthol e-cigarettes,” said Lester. “They’re anxious for agency action on that.”