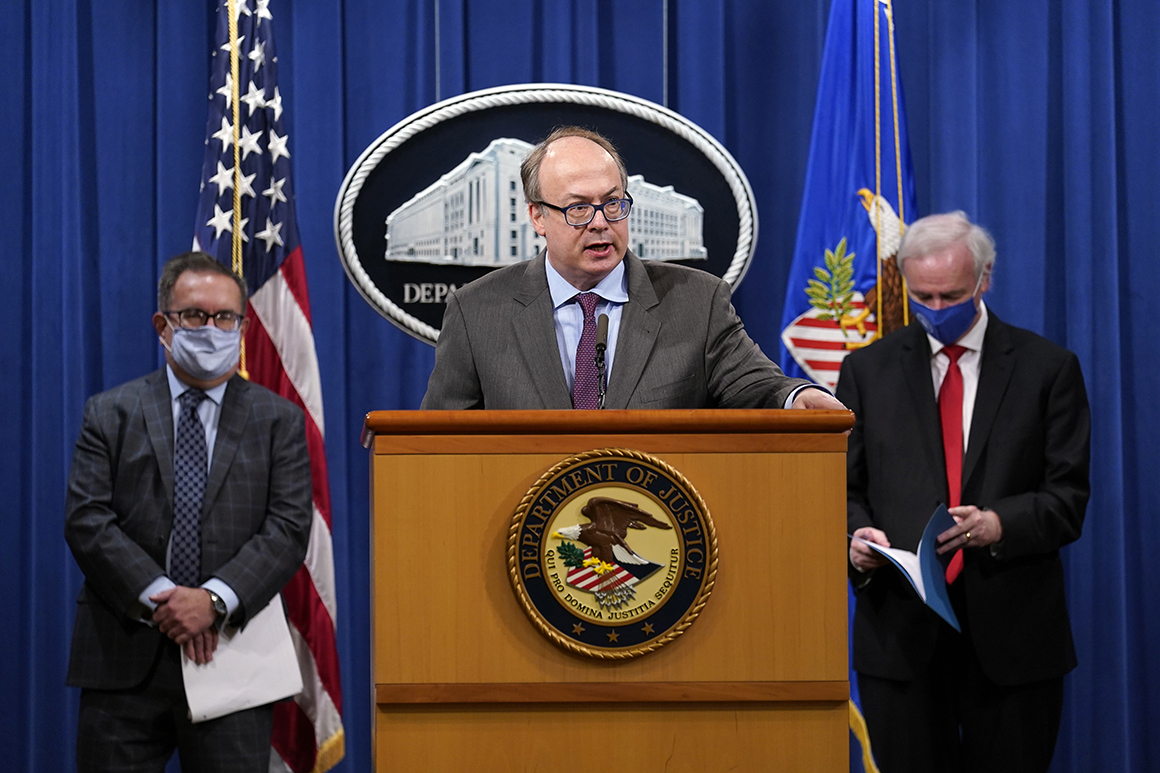 A top Trump Justice Department official who aided the former president’s quest to overturn the 2020 election refused to answer substantive questions in a meeting with congressional investigators on Friday.

The former official, Jeffrey Clark, instead delivered a 12-page letter from his attorney — a lawyer who worked on a post-election lawsuit aimed at overturning the results in Georgia — defending his refusal to testify.

The attorney, Harry MacDougald, wrote that Clark intended to wait at least until courts resolve Trump’s own lawsuit challenging the Jan. 6 select committee’s access to his White House records.

The Jan. 6 panel’s chair, Rep. Bennie Thompson (D-Miss.), told POLITICO that Clark’s refusal to testify could lead to a referral to the Justice Department for contempt of Congress.

“That’s on the table,” Thompson said. The committee has voted to hold just one other witness, former Trump advisor Steve Bannon, in contempt. That referral, which the full House passed last month, is pending before the Justice Department.

Clark’s letter is unusual and surprising. To make the case that Clark cannot testify to the Jan. 6 committee, it cites a separate letter in which Trump’s lawyer specifically said the former president would not try to block Clark’s congressional testimony.

In the lengthy letter, Clark counsel MacDougald cites potential executive and attorney-client privilege — among other things — to justify his client’s refusal to cooperate. Although Trump appeared to clear the way in August for former DOJ officials — including Clark — to testify, MacDougald argues that Trump’s permission came with a caveat: that congressional investigators still couldn’t ask about anything subject to executive privilege.

“It is improper to put Mr. Clark in a vise between this committee and its claimed enforcement powers on the one hand, and his constitutional and ethical obligations on the other,” MacDougald writes, “especially while there is a pending lawsuit to determine President Trump’s privilege objections.”

Despite Trump’s effort to assert privilege to bar his White House records — a move that a federal judge seemed highly inclined to reject — he has not done so in Clark’s case.

On Aug. 2, Trump’s then-lawyer, former Rep. Doug Collins (R-Ga.), wrote a letter saying the former president would not go to court to try to block Clark and other DOJ officials from testifying to congressional investigators about matters related to Clark and DOJ.

MacDougald’s missive argued to the Jan. 6 panel that Trump’s letter declining to impede Clark’s testimony should, in fact, block it — because it indicated that Trump could change his position on letting former DOJ officials testify if Congress asked for privileged information from other senior officials.

MacDougald also argued that Clark had no direct involvement in any aspect of the attack on the Capitol on Jan. 6, which he suggested was the committee’s primary focus. The panel itself has repeatedly emphasized that its scope also includes efforts by Trump to stoke distrust in the election results and overturn his defeat.

“Accordingly, beyond showing up today to present this letter as a sign of his respect for a committee of the House of Representatives, albeit one not formed in observance of the ordinary process of minority participation, Mr. Clark cannot answer deposition questions at this time,” MacDougald’s letter says.

MacDougald also aimed to distance his client from the events of Jan. 6 in his letter.

“Mr. Clark had nothing to do with the January 6 protests or the incursion of some into the Capitol,” it reads. “He has informed me he worked from home that day to avoid wrestling with potential street closures to get to and from his office at Main Justice. Nor did Mr. Clark have any responsibilities to oversee security at the Capitol or have the ability to deploy any Department of Justice personnel or resources there.”

Thompson said the Jan. 6 panel would discuss Clark’s refusal to testify at a meeting Friday afternoon and that a contempt citation is possible.“That’s on the table,” he told POLITICO.

Earlier on Friday, Clark was photographed heading into and out of a brief deposition with the select panel investigating the insurrection. It was his first time facing any congressional probe related to the attack, and he was joined by MacDougald, an Atlanta lawyer who partnered with conspiracy theorist Sidney Powell to challenge the results of the 2020 presidential election in Georgia.

CBS’s Ellis Kim tweeted a picture of Clark and MacDougald departing a congressional office building after the deposition. It’s unclear if Clark answered the committee’s questions while he was behind closed doors, though he appears to have been with the panel for less than two hours — a fairly short appearance. A spokesperson for the select committee declined to comment.

The Jan. 6 select committee subpoenaed Clark last month to compel his testimony. Clark had been scheduled to meet with the committee last week, but shortly before that date, he parted ways with his previous attorney and the deposition was delayed.

MacDougald, the lawyer who accompanied Clark, told the conservative PowerLine blog in November that he worked on the suit contesting Trump’s 2020 loss in Georgia as “more than a mere conduit.” He did not immediately respond to a request for comment.

Clark was a top official at the Justice Department in the final weeks of Trump’s presidency and helped orchestrate an effort to challenge the results of the election in multiple states, including Georgia.

According to Senate investigators who interviewed top Trump DOJ officials, Clark drafted a letter to multiple states that would have informed officials that DOJ had “taken notice” of election irregularities in their state. The letter further recommended calling a special legislative session to evaluate those alleged irregularities, determine who “won the most legal votes” and consider appointing a new slate of Electors.

Clark, DOJ’s only Senate-confirmed official known to have supported Trump’s efforts to contest his loss, also told then-acting Attorney General Jeff Rosen that Trump planned to oust him and put Clark himself in charge of DOJ, Rosen later testified. Rosen and a host of other top Trump administration lawyers told the then-president they would resign en masse if that happened, and Trump stood down.

Clark also drafted a letter claiming the FBI had reason to believe there was significant election fraud in multiple states Biden won — a claim that was false. Clark wanted to send the letter to those states’ legislatures, but Rosen and his deputy Richard Donoghue both refused.

MacDougald, for his part, signed on to the filing of a lawsuit that was part of Powell’s broad effort to invalidate the results of the 2020 election in multiple states. The suit asked a federal judge in Georgia to “decertify” President Joe Biden’s victory in the state and cited sweeping, discredited claims of fraud and irregularities.

On the Hill, investigators’ focus on Clark’s involvement has also implicated a current member of Congress, Rep. Scott Perry (R-Pa.), who introduced Clark to Trump. Perry became a lead Trump all in Congress in attempting to challenge the results of the election in Pennsylvania.

Before the post-election chaos unfolded, Clark had a relatively low profile as the head of the department’s Environment and Natural Resources Division. He was previously a partner at Kirkland & Ellis.

Senate investigators probing Trump’s pressure campaign inside the Justice Department have sought for months to interview Clark. Top Justice Department officials in the Biden administration have authorized him and other key figures to cooperate.

“More than two months after DOJ authorized him to testify without restriction, Clark still has not agreed to the Committee’s request that he sit for a voluntary interview,” according to a report issued last month by Senate Judiciary Chair Dick Durbin (D-Ill.).

Durbin did not issue a subpoena for Clark’s testimony.