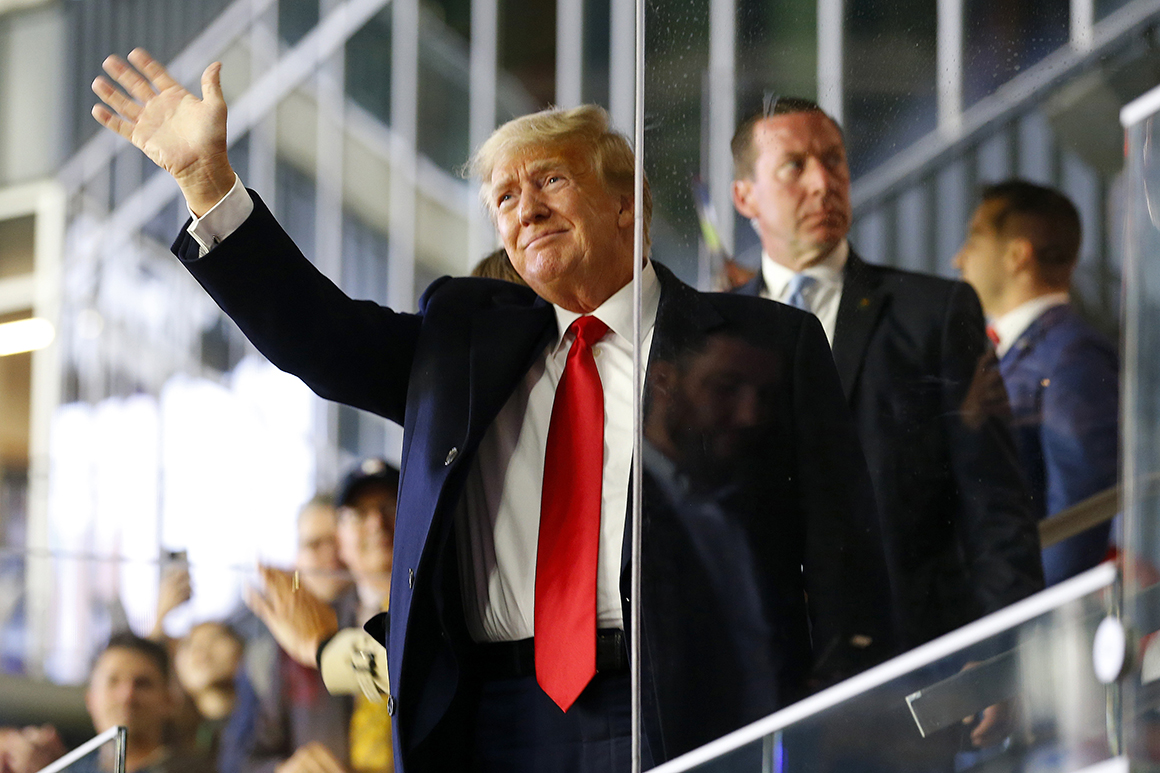 Regardless of who wins the gubernatorial race Tuesday in Virginia, one victor is guaranteed: Donald Trump.

At least according to Trump.

The former president has jumped headfirst into the race in recent days, head-faking a possible rally that he never held and hosting a tele-rally Monday that lasted mere minutes. He issued statements touting the importance of “my base” and his “complete and total endorsement” of Glenn Youngkin, the Republican candidate who has tried to keep Trump at arm’s length even as Democrat Terry McAuliffe constantly frames him as a “Trumpkin.” He then took a shot on Fox News at the last Republican who ran for Virginia governor, Ed Gillespie, who “did not embrace Trump in Virginia” and—in Trump’s wording—“got killed” at the polls for it.

The underlying message is hardly subtle: If Youngkin wins, Trump will take credit. If he loses, he won’t take blame.

“If there’s one constant with Donald Trump, it’s that he’s going to declare himself the winner —regardless of the outcome,” said Tucker Martin, an adviser to that Gillespie campaign, which struggled when faced with a similar Trump balancing act back in 2013.

Trump’s insistence on becoming part of the dialogue in the nation’s most-watched governor’s race comes at a time of uncertainty for his post-presidency, with national Republicans barely hiding their hopes that a Youngkin victory would show a way for a Republican to win a battleground state without Trump’s imprimatur. It is, his aides concede, a thinly-veiled attempt to demonstrate his continued prominence within the GOP.

“What Trump wants is for Republicans to win who support his agenda. And Youngkin does,” said one adviser, who spoke on condition of anonymity to talk freely. “The fact is that this is still Trump’s party and it’s his base that will push Glenn over the top. Youngkin needs Trump’s base more than Trump needs Youngkin. But he wants him to win.”

While Trump’s still the heart of the Republican Party, he’s not a constant presence any longer, having been booted both from office and from the major social media platforms. That’s forced him to adjust, including by issuing a rapid fire of statements through his political action committee. He offered seven total on Monday, including several attempts to, once more, pre-spin the outcome by pushing false accusations that the election would be tainted by voter fraud.

Trump’s lower profile has been a relief for some Republicans on the ballot in states such as Virginia that aren’t so ruby-red. Martin specifically noted two huge differences between this political environment and the one four years ago: An unpopular Joe Biden is struggling in the White House right now — not an unpopular Trump — and Trump is banned from Twitter, where his rapid-fire stream-of-consciousness posts often shaped the debate.

“In 2017, it was wake up, see what Trump tweeted, and have to answer for it as Democrats pushed it around,” Martin said. “Virginia Democrats got too comfortable with that. It was easy for them when we had someone in the White House and we had to deal with that every day, vs. them being retired in Florida and them being off Twitter and they’re just one issue out of many.”

McAuliffe himself conceded the point in a CNN interview Monday night when asked if he wished Trump still had his toxic Twitter account.

“From a political perspective,” McAuliffe acknowledged, “I think that would be great.”

Tim Murtaugh, Trump’s former campaign communications director who worked in Virginia politics, said “it’s a fact that no Republican can get elected statewide anywhere without the support of the Trump base.” But he added, “McAuliffe centered his whole campaign on running against Trump, so much so that it became a joke and wasn’t working. When you’re in the closing days and you’re still trying to get your own base engaged, that’s a big problem.”

“Glenn is at the top of the ticket and the race is between Youngkin and McAuliffe, despite what McAuliffe wants to make it about,” said a Youngkin campaign official.

Another Trump adviser said Youngkin has benefited from Democrats framing the race around Trump, as it has allowed him to talk about issues such as education and crime instead.

“Youngkin had the benefit of being able to run ads that didn’t have to shore up Trump bonafides because McAuliffe did it for him,” the second adviser said. “The reality is, Trump defined the race. To a large degree it was a benefit [to Youngkin] because he could hone in on the issues while the Democrats helped motivate the Trump base.”

Still, other Trump advisers acknowledge they prefer him off Twitter and that the president’s use of it was often counterproductive for him. Critics of the former president are already using the possibility of a Youngkin win to make the case that those Twitter habits, and his presidency in general, were an anchor on the party.

Former Virginia Rep. Barbara Comstock, an outspoken “Never Trump Republican” who blames her 2018 reelection loss on the “toxic” conditions Trump created in the commonwealth and across the country that year, gleefully took to Twitter Monday night to point out the Drudge Report headline: “YOUNGKIN WINNING WITHOUT TRUMP.”

“Trump is trying to glom onto Glenn. Glenn isn’t trying to glom on to Trump,” she told POLITICO. “Here’s a Republican who isn’t a suck-up who is showing a way to win without Trump. And Trump is nervous about it. We know he already has two statements ready. If Glenn wins, ‘I had everything to do with it!’ And if Glenn loses, he’s going to say, ‘See! This is what happens when you don’t embrace me enough.’ He can’t tweet it because he got kicked off Twitter.”

Jeff Ryer, a political consultant in Virginia, said the fact that Trump positioned himself to claim a win out of Virginia regardless of the outcome was just a sign that “he’s a smart politician. He knows what he’s doing.”

Ryer said Democrats in Virginia applied “the wrong lesson” from the failed California recall of Democratic Gov. Gavin Newsom in September, in which the party attempted to make the election all about Trump. Virginia, Ryer said, is less of a blue state, and Youngkin tried to keep the campaign as “solely a Virginia affair, talking about Virginia issues, not Trump.”

“What’s Terry McAuliffe talking about? A guy who wrote mean tweets,” Ryer said. “And he’s lamenting he can’t use the mean tweets anymore.”