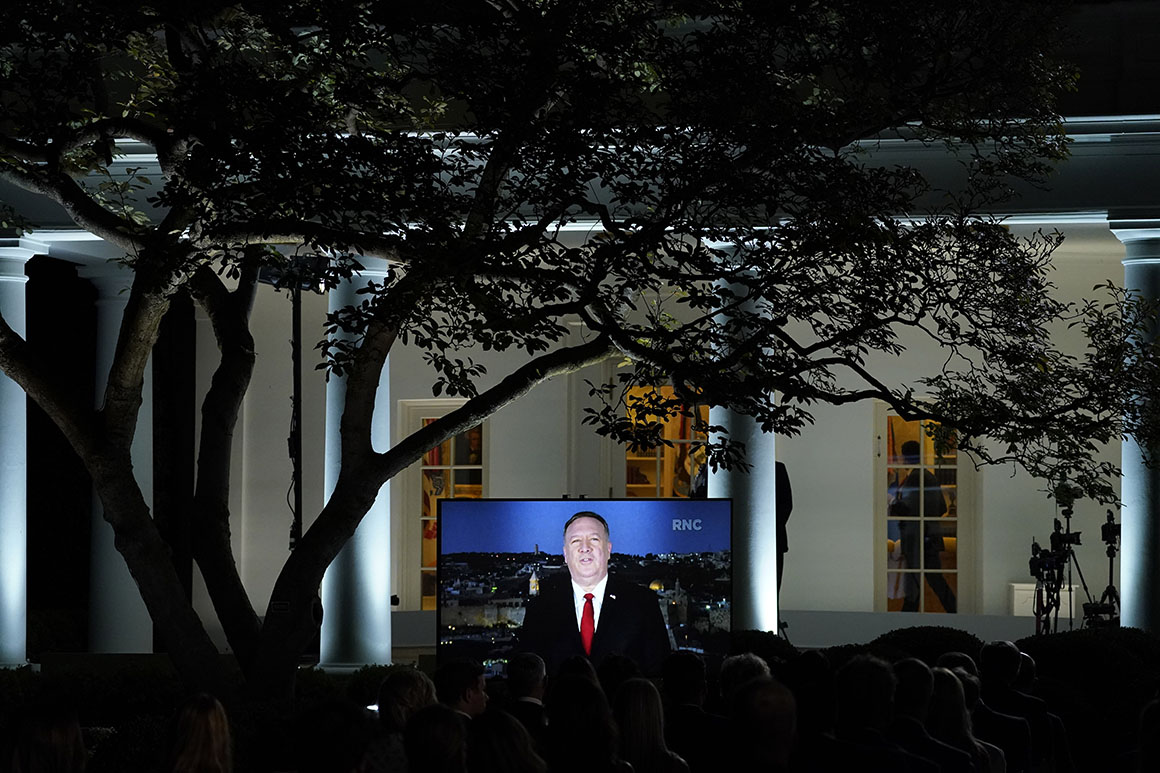 More than a dozen top Trump administration officials violated the terms of the Hatch Act in the run-up to the 2020 elections, the U.S. Office of Special Counsel said in a report released Tuesday.

The report depicts an administration that felt little obligation to the terms of the 1939 law, stating that some officials “intentionally ignored the law’s requirements and tacitly or expressly approved of senior administration officials violating the law.”

OSC wrote that this disregard, which stemmed from the former president down, laid the groundwork for “what appeared to be a taxpayer-funded campaign apparatus within the upper echelons of the executive branch.”

The Hatch Act, named for a former New Mexico senator, restricts federal employees — aside from the president and vice president — from certain political behavior that could include tweeting certain messages, speaking about candidates, diverting official travel to attend political events and fundraising. It was enacted in 1939 after Democrats faced allegations of deploying Works Progress Administration employees to influence elections the year prior.

The president could ban former federal employees who violate the Hatch Act from serving in the federal government again — or if they tried to return in a future administration, the Senate could hold up their confirmation or the oversight agency could pursue additional penalties.

If a federal official is still employed, the Office of Special Counsel often resolves cases by issuing a warning letter. Sometimes it works with an agency to negotiate disciplinary action — perhaps with a fine or suspension — or sends a case to the Merit Systems Protection Board, which hears cases of federal workers.

The findings are the result of more than 100 complaints filed with the OSC — the federal agency that investigates allegations of federal employees using their platform to engage in politics — and lodged against various senior members of former President Donald Trump’s administration. Many of the complaints surrounded staging the final night of the 2020 Republican National Convention at the White House, though OSC determined that hosting the event was not itself a violation of the Hatch Act.

The report found that some of the 13 people named in the report violated the Hatch Act on multiple occasions. The bulk of the violations, according to investigators, came as the result of comments pertaining to the election of then-Democratic presidential nominee Joe Biden while the officials were giving interviews in their capacity as government officials.

Senior counselor to the president Kellyanne Conway — whom OSC in 2019 recommended be fired due to repeated, “egregious” Hatch Act violations — was found by OSC to have crossed the line in a pair of August Fox News interviews in which she criticized Biden’s selection of Kamala Harris as a running mate and Harris’ qualifications for the job of vice president. Conway did not immediately return a request to comment on the report’s findings.

Meadows was cited for violating the Hatch Act on at least three occasions, including while campaigning on behalf of now-Rep. Madison Cawthorn (R-N.C.), who was running for Meadows’ former congressional seat, and in a Aug. 26 POLITICO Playbook interview.

At one point in that interview, Meadows argued the general public does not care about Hatch Act violations.

Other Trump officials were determined to have used the powers of their office to aide in Trump’s reelection efforts.

Those include former acting Homeland Security Secretary Chad Wolf, who presided over a naturalization ceremony at the White House that was broadcast during the 2020 Republican National Convention.

The report determined that the event was orchestrated to aid Trump’s reelection effort despite several warnings from ethics officials to DHS staffers, including Wolf’s chief of staff, that doing so would violate the Hatch Act. The OSC report said that the episode was “emblematic of the Trump administration’s willful disregard for the Hatch Act.”

Wolf had said he personally did not know video of the event would be used during the convention, and OSC stated it found no “direct evidence” that he knew of the plan.

Pompeo, a possible 2024 presidential candidate, was also found to have improperly altered State Department policy in order to allow himself to speak during the RNC event at the White House. Pompeo then recorded a speech while overseas in Jerusalem on official business that was played during the convention. The report noted that Pompeo did not refer to himself as secretary of state during the taped speech, but he did reference foreign policy matters repeatedly during his remarks.

“The timing, justification and scope of the change suggest its sole purpose was to promote President Trump’s reelection campaign,” the report states.

Representatives for Pompeo, Wolf, Kushner and McEnany did not immediately return requests to comment.

The disregard for the Hatch Act at the top levels of the Trump administration led some career federal employees to ask OSC whether they themselves were still beholden to its strictures, the report states.

In its report, OSC notes that for high-level officials, “the Hatch Act is only as effective in ensuring a depoliticized federal workforce as the president decides it will be.”

Investigations into potential violations can take weeks or months, even for comparatively simple cases, OSC said, a weakness further underscored by the report’s delivery more than a year after the 2020 elections.

“This reality creates a window for an administration that is so inclined to ignore the Hatch Act in the final months of an election cycle, knowing full well that any public report or disciplinary action would not likely occur until well after the election,” it states.

The report lays out several recommended legislative changes to the law to enhance OSC’s ability to enforce its confines on federal employees’ political activity.

The Biden administration came into office promising to better adhere to the Hatch Act and other ethics rules as a way to distinguish itself from its predecessor, though it too has gotten tripped up by the law at times.

In May, OSC concluded that Housing and Urban Development’s Marcia Fudge, a former Ohio lawmaker, broke the Hatch Act earlier in the year by weighing in on the 2022 Ohio Senate election. Fudge apologized a day after she made the comments in a March 18 White House press briefing.