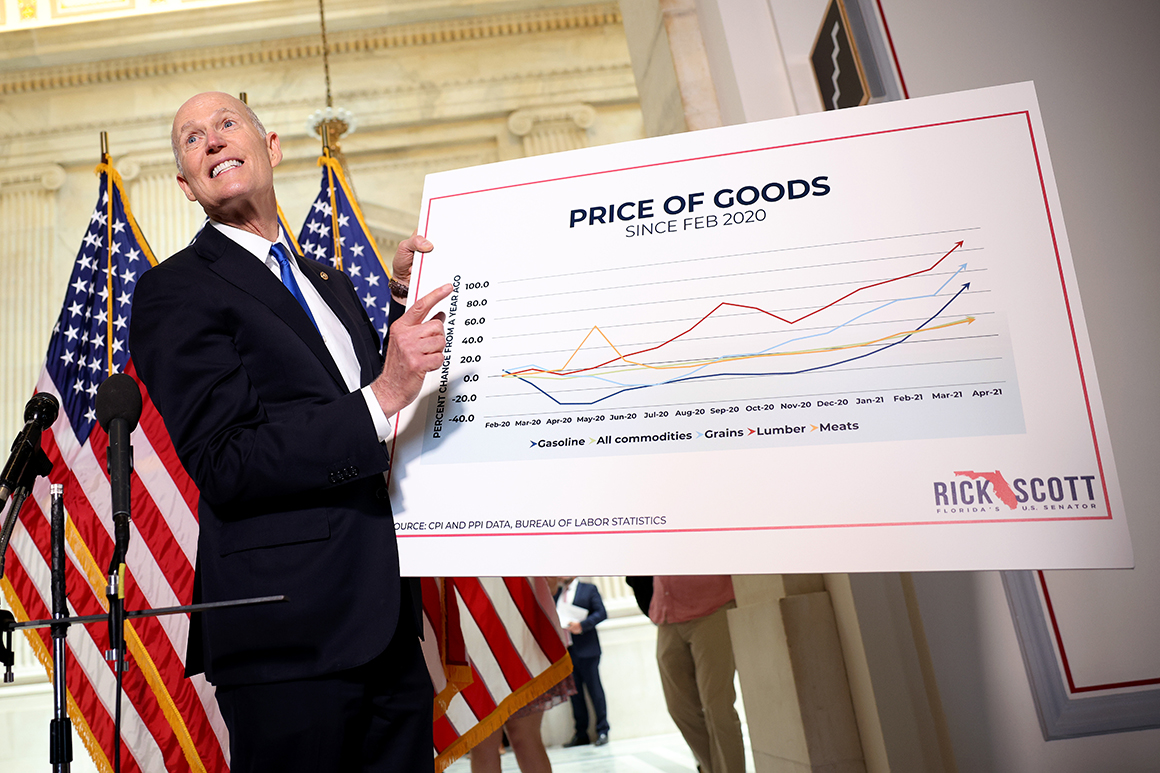 Republicans have pounded Democrats for months over spiking gasoline and grocery costs, a phenomenon they’ve dubbed “Bidenflation.” By the time next year’s elections roll around, that line of attack may lose its punch.

Prices of everything from oil and natural gas to wheat and corn have already started falling from their peaks earlier this year. That trend is likely to continue in 2022, lowering gas prices and stabilizing food costs for consumers, a potential boon for President Joe Biden’s party as it seeks to maintain control of Congress.

For now, consumer prices are still a hot issue, with the government on Friday expected to report another month of decades-high inflation — and the problem won’t disappear next year. Shipping delays that have driven up prices of products like cars and furniture, paired with slow-moving but longer-lasting cost increases such as rent, could spur the Federal Reserve to hike interest rates and curb economic activity. But the prices felt most acutely by voters could be telling a better story for Democrats heading into the midterms.

“The politically relevant part of inflation is almost the exact opposite of the economically relevant part that the Fed is focused on,” said Jason Furman, a professor at Harvard Kennedy School who was a top official in the Obama administration. “People care about the prices they pay, and especially the prices they pay most frequently and most transparently, which are gasoline and food.”

The White House has already started to seize on the sizable drop in crude oil prices that began in late October, sparked by a global boost in production and fears about the Omicron variant of the coronavirus that might dampen demand for travel. The administration has also cited its own decision to release 50 million barrels of oil from U.S. reserves.

“Gas prices are down somewhat,” White House Chief of Staff Ron Klain tweeted on Wednesday. “They are projected to come down more…”

The U.S. Energy Information Administration this week projected that gasoline prices will decline to an average $2.88 per gallon next year, down from $3.39 in November.

Still, Americans are growing increasingly worried about inflation, with 56 percent saying it’s causing them a financial strain and more than half citing food and gas costs, according to a Wall Street Journal poll this week.

Republicans have used that concern so relentlessly to criticize Biden’s big-spending plans — Sen. Rick Scott of Florida called the issue a “gold mine” for the party — that White House Press Secretary Jen Psaki has accused them of “rooting for inflation.”

“Look at what inflation’s doing: It’s not hurting the rich, it’s hurting the poorest families when they’re struggling to fill up their cars, put food on the table, afford a house,” Scott said on Fox News this week.

The biggest factor that could prove Republicans right about overall inflation would be a renewed surge in energy prices next spring and summer that goes above the levels of recent months.

But oil prices have likely peaked, barring unforeseen shocks, said Al Salazar, vice president of intelligence at energy analytics firm Enverus. The Organization of the Petroleum Exporting Countries is ramping up production, which will put downward pressure on prices, and major economies are turning to other energy sources to meet their heating costs for the winter, which could also be warmer than previously expected.

“We have all this supply coming online and demand seasonally gets weaker, and then we have Omicron on top of that,” Salazar said. “We’ll probably get some restrictions, in terms of travel, and that leads to a natural surplus.”

In the second half of next year, prices could come back up somewhat, but “I really don’t think you’ll have prices that are high” given how much supply there’s expected to be, including from U.S. oil producers, he added.

Crude oil was trading at about $72 a barrel midweek, down from its late October peak of $84, though still higher than the $59 price in December 2019 before the pandemic hit.

Salazar said he expects that prices next year could hover in the low $70 to upper $60 range, which would ultimately translate to a drop in the cost of gas; prices at the pump lag those of crude by no more than a month or two.

Greater production globally could also bring down the prices of key crops like corn and wheat. The U.S. is a major exporter of food, so the more other countries produce — or the more supply chain delays keep perishable goods in the domestic market — the more commodity prices drop.

“We had our strongest prices back in May, June, July of this year,” said Chad Hart, an agricultural economist at Iowa State University. “On the crop side, even as I look at the livestock side, we see prices easing there.”

Corn, for example, was trading around $5.85 per bushel midweek, compared to a high of $7.72 in May, though still much higher than the $3.66 price before the pandemic. But markets are betting on that downward trend to continue over the next couple of years.

The relief from those steady decreases might not be as dramatic for consumers. “Food prices are sticky, so they love to go up, but they hate to go down, whereas commodity prices can move very rapidly in both directions,” Hart said. He added that food prices also include costs from packaging and storing to shipping and marketing.

But lower crop prices could prevent grocery prices from rising much next year compared to sharp increases this year, he said.

A looming question, particularly for the Fed, is how much price spikes in other sectors of the economy will continue. Rent, the largest portion of most tenants’ monthly expenses, has begun pushing up overall inflation, and that dynamic is expected to persist for years. Meanwhile, central bank officials are also seeing businesses more emboldened to raise prices, reporting anecdotes where “strong demand generally allowed firms to raise prices with little pushback.”

Still, a decrease in commodity prices across the board — from steel to cotton — could help bring down overall inflation readings because they’re critical to so many goods.

Skanda Amarnath, executive director at the worker advocacy group Employ America, said the trend might also suggest other reasons to be optimistic about the outlook for prices, if it indicates that supply chain issues are beginning to get resolved.

“Next year, we’ll be more mature in the recovery with less fiscal boost,” he said. “Growth will be slower next year, and at the same time you’re seeing that there are pretty tangible pieces of evidence that production capacity, particularly in Asia, is likely to improve. The signals you’re getting from commodity prices seem consistent with the story of healing.”