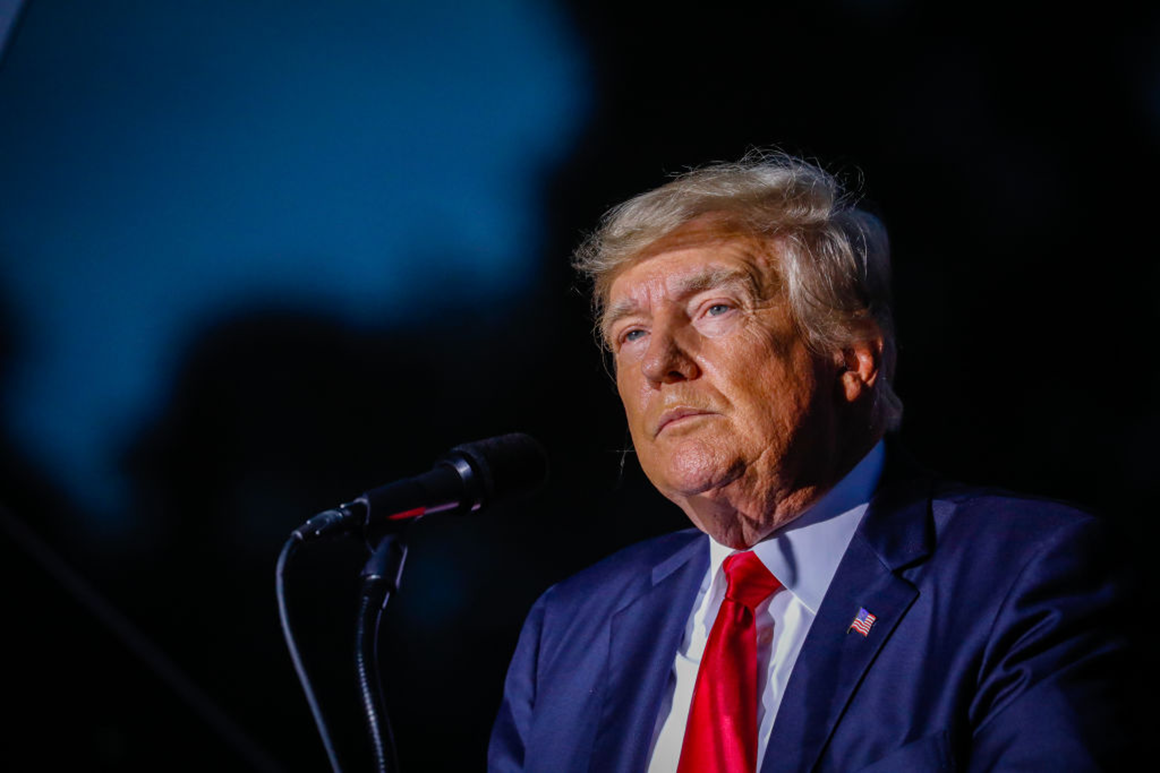 A federal appeals court panel debated Friday whether former President Donald Trump strayed beyond his presidential duties in his aggressive response to a New York writer’s claim that he raped her in a department store dressing room several decades ago.

The central issue is whether Trump’s responses to E. Jean Carroll were so extreme that he abrogated the immunity that typically applies to work-related statements by federal employees.

“Who is he serving when he says something like, ‘She’s not my type?’…It would be one thing if he said, ‘I didn’t do it,’ but he goes way beyond that,” Judge Denny Chin said during oral arguments before the 2nd Circuit Court of Appeals “Did he need to say, ‘She’s not my type?’”

Carroll sued Trump in 2019, alleging that he defamed her through several responses to her allegation that he cornered her in a dressing room and raped her at the Bergdorf Goodman store in Manhattan in the 1990s.

After allowing the case to simmer for nearly a year, the Justice Department stepped in with a bid to effectively shut down the litigation by taking over Trump’s defense and asserting that his answers to press questions about Carroll’s suit were part of his official duties as president.

The matter also became a political headache for the Biden administration when its new appointees at the Justice Department, including Attorney General Merrick Garland, indicated in June that they planned to press on with Trump’s defense.

Justice Department attorney Mark Freeman, who stressed that he was representing the United States in the case and not Trump individually, began his remarks to the three-judge panel by disavowing Trump’s remarks.

“The former president made crude and offensive comments in response to the very serious accusations of sexual assault made by Ms. Carroll. I’m not here to justify or defend those comments,” said Freeman. “I’m here because any president facing a public accusation of this kind, with the media very interested, would feel obliged to answer questions.”

A New Jersey lawyer who has recently taken over much of the portfolio of lingering litigation against Trump, Alina Habba, told the court she, too, was arguing on principle to defend the office of the presidency.

“This case, in my opinion, in his opinion, is meritless,” Habba said. “What is of monumental importance right now is that this is not a political matter. This is not about being a Democrat or a Republican…This case is important — if affirmed, future presidents will be needlessly hindered by frivolous lawsuits.”

Habba said that if Trump is exposed to personal liability for his statements, President Joe Biden could wind up liable for suggesting that Illinois teen Kyle Rittenhouse — who was recently acquitted of murder in the deaths of two men during a protest — is a racist. A spokesperson has denied Biden intended to imply that.

“What is the court going to do if Kyle Rittenhouse goes after Pres. Biden for calling him a white supremacist?” the Trump lawyer said. “They need to focus on their job. We are all imperfect people.”

Habba conceded that “an unprovoked attack on a citizen” would be outside the scope of a president’s duties, but Carroll essentially compelled Trump to respond.

“She went to the press. She made it public… She was on the aggressor side,” Habba said.

An attorney for Carroll, Joshua Matz, conceded that if Trump simply denied Carroll’s allegation that would plausibly have been within his duties as president to assure people of his fitness.

“A White House job is not a promise of an unlimited prerogative to brutalize the victim of wrongdoing through personally-motivated attacks,” Matz said.

But several judges seemed troubled about whether courts can draw a line between a simple denial and the kind of proactive response that might put the president on the hook for a civil suit.

“You’re suggesting the president of the United States is always going to be measuring their language every time they talk to wonder whether if they articulate their thinking just a little bit more or if they lose their cool or whatever, somehow that’s the line between personal liability and no personal liability,” said Judge William Nardini, a Trump appointee. “So, what is the line?… A calmer tone?”

Matz suggested it was not at all unusual to have a court or a jury decide what motivated someone to commit a specific act. “It’s actually not weird. We do that in law all the time,” he said.

Freeman, the DOJ lawyer, strongly disagreed. “That gets us into very dangerous territory,” he said.

Whether Trump’s response was within the scope of his presidential duties or not is a potentially pivotal issue in the case. If he was, the suit is essentially dead because federal law doesn’t allow suits against federal employees for torts like defamation under those circumstances.

“The undisputed facts demonstrate that President Trump was not acting in furtherance of any duties owed to any arguable employer when he made the statements at issue,” Kaplan wrote.

To an extent, the case scrambles ideological lines. Liberal legal activists traditionally favor a broad view of scope of employment because in most cases, that approach allows individual plaintiffs who claim harm to access the deeper pockets of the employer.

However, in the circumstances of Carroll’s suit, that broad view actually denies her relief because of the rules about suits against the federal government.

The panel gave no clear indication Friday about how it is likely to rule in the case. All of the judges sounded concerned about allowing defamation suits against a sitting president, but none said it was clear that Congress had prohibited that.

Chin, an appointee of President Barack Obama, also sounded skeptical that public officials should have carte blanche to say anything at all just because the media might take notice. “Can a Congressperson on the steps of the Capitol, or the White House, say anything they want and be protected as long as there’s a reporter listening?” the judge asked.

Judge Guido Calabresi dominated much of the roughly 80-minute argument session with observations about tort law, which he said he has been teaching for 62 years. Calabresi, an appointee of President Bill Clinton said the key issue in the suit — scope of employment — is actually one of District of Columbia law and not federal law.

Calabresi said that means the top court in the D.C. system, the D.C. Court of Appeals, should weigh in on whether Trump’s actions were sufficiently job-related to deemed part of his work.

Habba, Trump’s lawyer, seemed frustrated with the possibility the case might be sent to another court. She noted that Obama and former Sen. Hillary Clinton have also invoked the same law, the Westfall Act, to claim that their public statements were part of their official duties.

“I appreciate trying to carve out — make new law, but this is done for a reason so that a president can address concerns of the public. That is his job, to make this country feel secure,” she said.