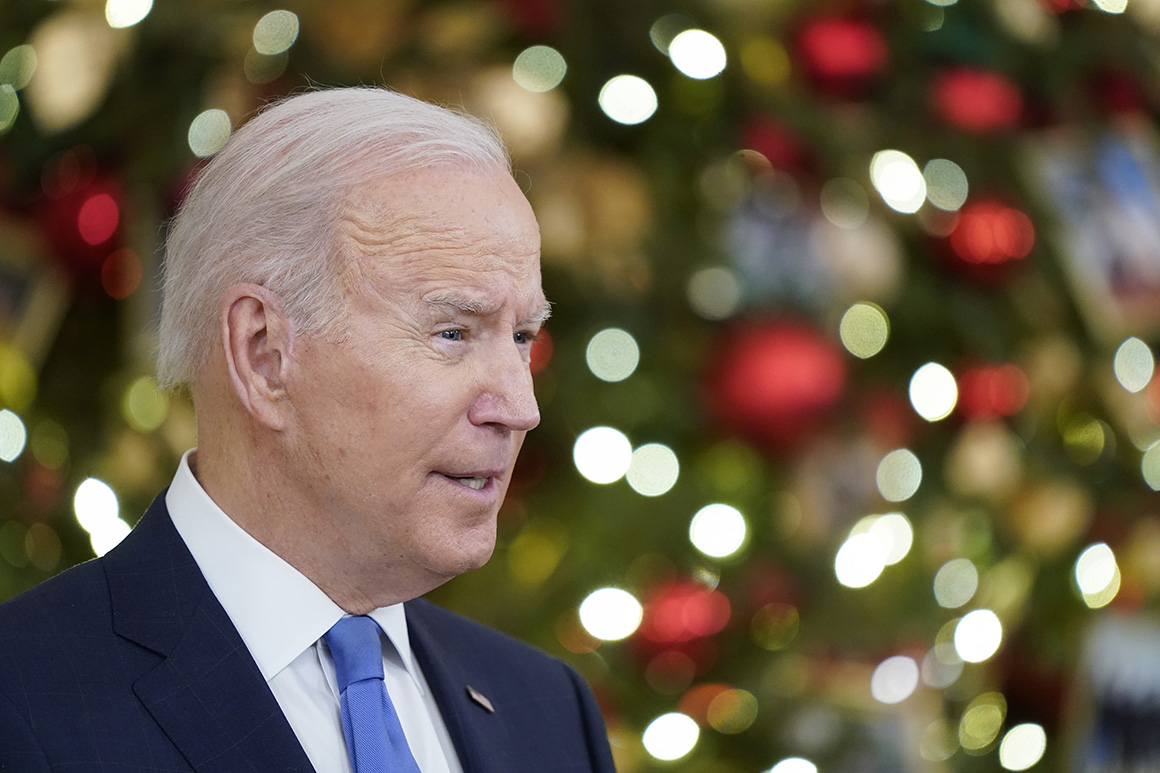 President Joe Biden rolled out new measures designed to expand coronavirus testing and reinforce hospitals, warning Tuesday that the U.S. faces a wave of infections fueled by the Omicron variant that could strain the nation’s health system once again.

Biden, delivering his second Covid-focused speech in a month marked by rising caseloads, pled with Americans to get vaccinated and seek out boosters, calling the virus’ resurgence a matter of “deadly business” for the millions who have refused the shots.

But he rejected fears that Omicron would prompt a return of widespread lockdowns and school closures, arguing that the government is far better prepared to respond to accelerating cases and hospitalizations.

The administration plans to send thousands more troops and medical personnel to aid overburdened hospitals, set up FEMA surge facilities and prepare shipments of protective gear to hard-hit spots around the country. It will further scale up vaccination sites and reopen federal testing locations.

And in a notable move, the federal government is purchasing 500 million at-home rapid tests that Americans will be able to order for free beginning in January.

Those initiatives amount to a redeployment of emergency defenses seen last year, ahead of expectations that the more contagious Omicron variant will drive an explosion of infections throughout the winter.

“This is a critical moment, but we also have more tools than we’ve ever had before,” Biden said.

Yet even as he projected confidence, Biden’s speech illustrated the contrasting messages that the White House has sought to deliver nearly two years into the pandemic.

The president veered from dire warnings directed at those who remain unvaccinated to reassurance for the more than 200 million who have gotten their shots, while at the same time trying to prepare the nation for a skyrocketing number of cases.

“If you’re not fully vaccinated, you have good reason to be concerned. You’re at high risk of getting sick,” Biden said, later telling those who are vaccinated that “these cases are unlikely to lead to serious illness.”

He also delivered a direct appeal to conservatives who make up a disproportionate percentage of vaccine holdouts, referencing former President Donald Trump by name and touting his disclosure this week that he had gotten a booster shot.

“Maybe one of the few things he and I agree on,” Biden said.

Just minutes later after offering that olive branch, though, Biden appeared to take a harder line with that very same group, while swiping at the conservative pundits and lawmakers who have sown distrust in the Covid-19 vaccines.

“The unvaccinated are responsible for their own choices,” Biden said, lamenting the resistance “fueled by dangerous misinformation on cable TV and social media.

More than a quarter of adults are still not fully vaccinated nearly a year into a vaccination campaign hampered by deepening partisanship, with studies showing them at much higher risk of hospitalization and death from Omicron than those who have gotten their shots.

Nearly 70 percent of fully vaccinated adults, meanwhile, have yet to receive their boosters — alarming officials in the wake of evidence that breakthrough Omicron infections are much more likely among those who have yet to get the additional shot.

Administration officials expect that sharp increase to continue throughout the winter, fueled by a variant so transmissible that it has became the dominant strain of Covid-19 within weeks of emerging in the U.S. Omicron accounted for nearly three-quarters of all new infections last week, according to estimates from the Centers for Disease Control and Prevention.

The surge means Biden — who is already grappling with falling approval ratings and the public’s pandemic fatigue — is likely to begin his second year in office the way he began his first: Attempting to fend off a fierce resurgence of Covid-19 with no clear end to the public health crisis.

Those concerns are driving the planned buildout of testing and hospital capacity, even as Biden and top health officials downplayed the threat to the majority of Americans who are fully vaccinated. Officials are optimistic that Omicron cases will not prove as severe as previous variants, yet have nevertheless grown worried that the sheer volume of infections could result in enough hospitalizations to strain the system.

The administration is setting up federal testing sites again, with the first due to open in New York City this week. And after weeks of criticism over its reluctance to send out free at-home tests, the government will buy 500 million tests that it plans to mail out on request.

Those free tests will not be available until January, and the administration is still setting up the website where people can request them. Officials have also yet to settle such questions as how many tests can be ordered at once. They also could not immediately say what proportion of those 500 million tests will be available on day one of the program, or what the purchase would ultimately cost the federal government.

Still, it represents a sharp about face for an administration that previously dismissed the idea of sending out free tests — arguing at the time that it would be too costly and inefficient.

But the plan prompted immediate backlash from public health experts who panned it as inadequate and overly complicated. Since then, demand for tests has exploded amid the Omicron surge, prompting severe shortages and worries in the administration that the need for more tests will only continue to rise.

On Tuesday, Biden disputed assertions that the administration had not acted fast enough, saying the speed of Omicron’s spread caught everyone by surprise.

“All of a sudden it was like everybody rushed to the counter,” he said. “What happened was the Omicron virus spread even more rapidly than anybody thought.”

In addition to expanding testing availability, the administration is also preparing a range of reinforcements for hospitals on the front lines of the surge. Along with putting service members on standby, federal emergency response teams are being sent to six states: Michigan, Wisconsin, Indiana, New Hampshire, Arizona and Vermont.

The Federal Emergency Management Agency will help hospitals expand capacity and provide additional transportation to move patients to other facilities as beds fill up. In an echo of the pandemic’s early days, hundreds of ventilators will be sent to states. Officials are also readying shipments of protective equipment to Covid-19 hot spots.