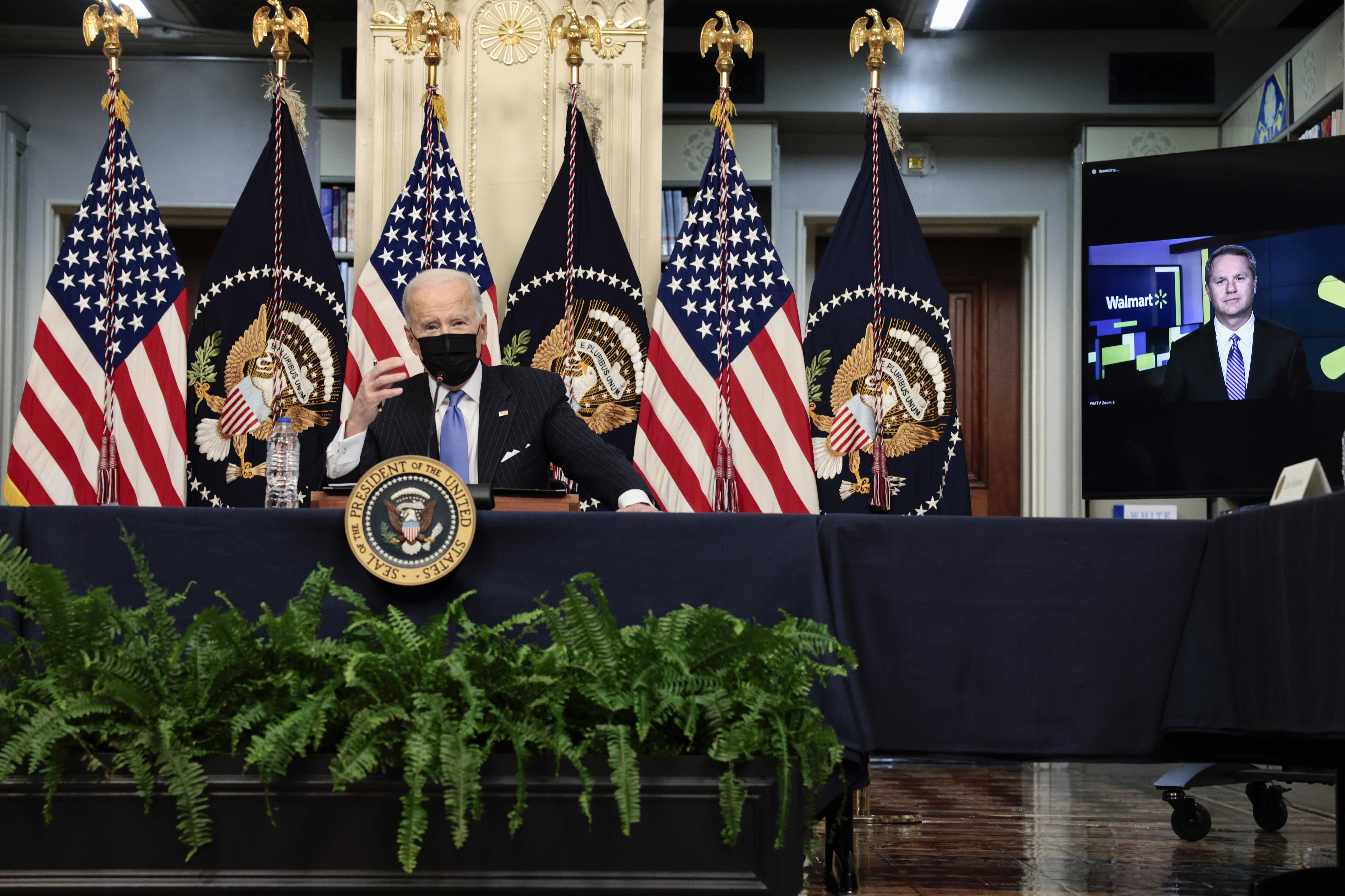 Not long before he joined the 2008 campaign trail, then-Sen. Joe Biden traveled to Iowa to deliver a blistering speech attacking the nation’s largest private employer, Walmart.

“My problem with Walmart is that I don’t see any indication that they care about the fate of middle-class people,” he told the crowd that day.

Biden went on to enter the race and lose that primary. But 15 years later, he finds himself in the White House. And over the first year of his presidency, the retail giant he once lambasted has become a key ally of his administration.

“Thank you. You’ve been really — really cooperative,” he told Walmart CEO Doug McMillon on Monday, during a meeting with CEOs on problems with the supply chain and concerns heading into the holiday shopping season. “I can’t tell you how much we appreciate it.”

The sight of a Democratic president embracing Walmart would have sent shockwaves through the political ecosystem not too long ago. But times have changed since those days when Biden and others were holding out the company as a corporate force of evil. Over the past few years, Walmart has adopted internal policies that have softened its image among Democrats. It has also donated to Democratic lawmakers and their causes, right as the party was forging common ground with corporate America during the Trump years. In turn, the company has won an audience with top Democratic officials, including the president himself. 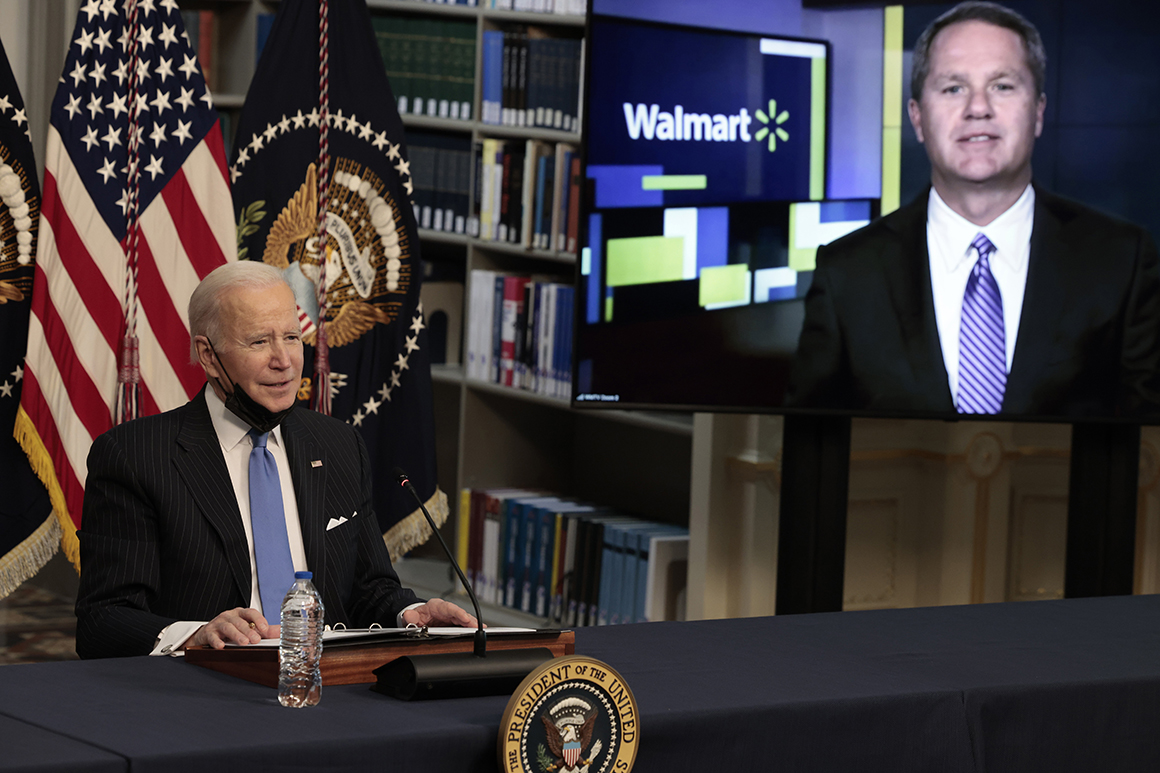 On Monday, Biden joked with the company’s CEO that he had “spent more time walking through the aisles of Walmart than I want to admit.” On Wednesday, he cited his administration’s collaboration with the company on issues related to the supply chain. And on two occasions, White House chief of staff Ron Klain has tweeted out McMillon’s remarks or praise as evidence of the administration’s success.

The administration has also promoted Walmart’s efforts to support Afghan refugees. Press secretary Jen Psaki noted that she ordered her Covid at-home tests from Walmart. And in selling the Build Back Better agenda, the White House has at least three times sent out Walmart’s lukewarm endorsement of the climate provisions before Congress, including those in the budget reconciliation and infrastructure bills.

Beyond the administration, the embrace of Walmart has been disorienting, especially for those in the labor community who fear the message it sends.

“It’s telling that in the White House statement touting its collaboration with CEOs to solve supply chain challenges, not one mention is made of the workers who drive the profits and keep the supply chains moving,” said Bianca Agustin, corporate accountability director at United for Respect, an advocacy group for Walmart and Amazon employees. “We need our elected officials to stand with the essential workers that are keeping our country running… We need regulations and laws in place to make McMillon, who leads the largest private workforce in the country, implement the changes that Walmart associates have been demanding.”

Walmart’s newfound status within Democratic political circles is, to a degree, a reflection of how the modern economy has shifted political considerations. Once laser-focused on how retail giants were impacting small businesses and exacerbating low wages, Congress has placed Amazon, Facebook, and other tech behemoths under its microscope in recent years.

But the friendly rapport with Democrats is also the result of Walmart’s attempt to use corporate initiatives to make inroads with the party, according to four people close to the company. A small fleet of lobbyists has been doing the company’s bidding in Washington, and at least the past two lead in-house lobbyists have both been Democrats.

“As the nation’s largest private employer and a bellwether for the U.S. economy, with deep roots in communities across the country, we’re used to working with policymakers from across the political spectrum,” said Brian Besanceney, Walmart senior vice president, chief communications officer, in a statement. “We’re glad policymakers view Walmart as part of the solution to national issues like climate change, pandemic response, and workforce development and training.” 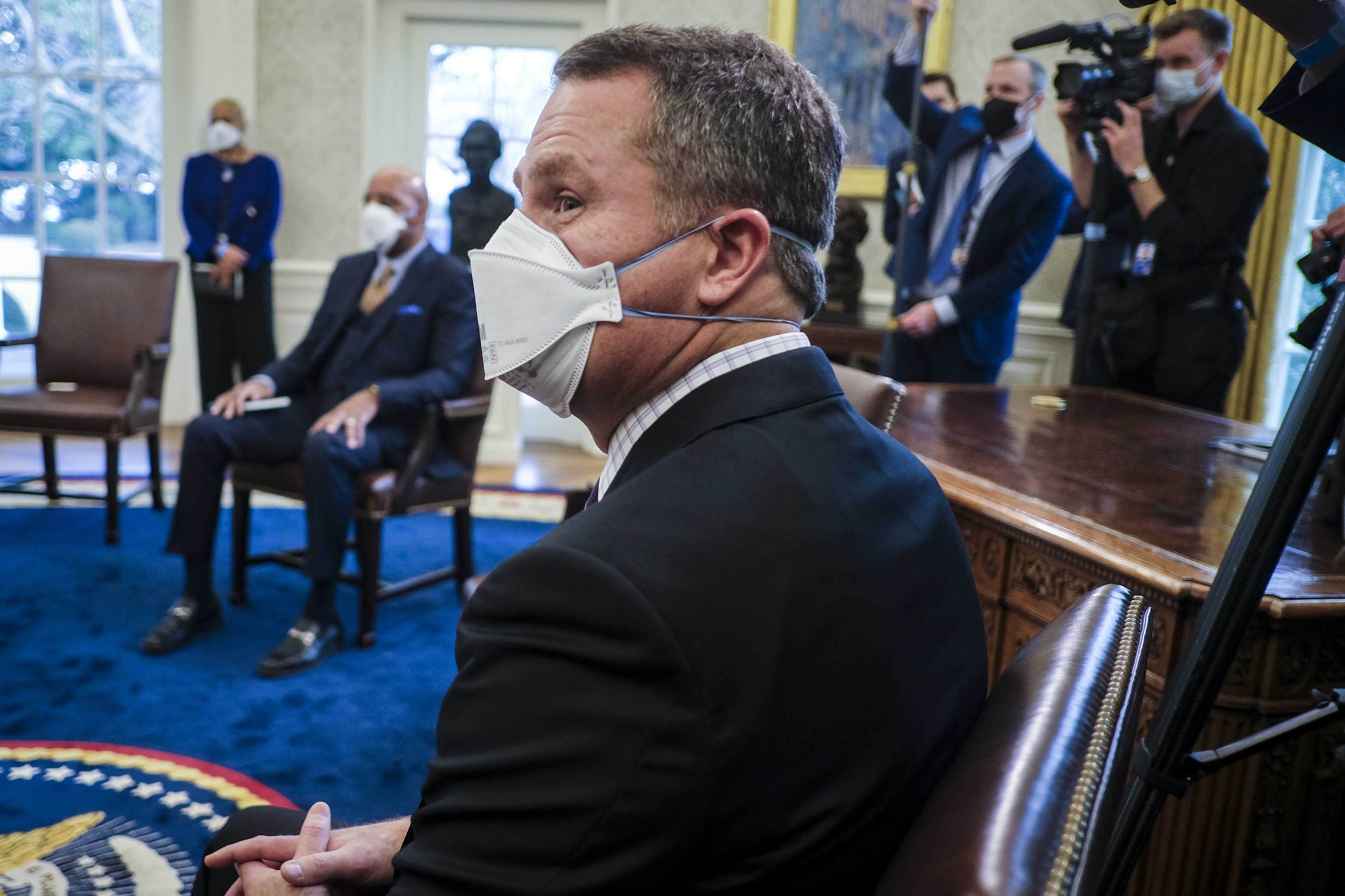 Political giving from Walmart’s PAC has evened out over the years, according to data from the money-in-politics watchdog group Open Secrets. The PAC gave $1.32 million to Republicans compared to just $358,500 to Democrats in the 2004 cycle. In the 2020 cycle, the PAC gave $596,000 to both parties. While Democrats had once refused to accept the company’s donations, lawmakers have become far more willing in recent cycles, according to an individual close to the company.

In 2018, Walmart announced that it would give $2 million in grants to the Congressional Black Caucus Foundation and the Congressional Hispanic Caucus Institute to help provide internship opportunities to diverse young candidates. Representatives Sheila Jackson Lee (D-Texas) and Joaquín Castro (D-Texas) praised the company’s support for increasing access to opportunities on the Hill.

Members of the family behind the company, the Waltons, have also doled out cash to Democrats and their allies too. As recently as May, Christy Walton gave $50,000 to the anti-Trump super PAC the Lincoln Project, and in October 2020, Alice Walton gave $300,000 to Unite the Country, a pro-Biden super PAC.

“When you have the kind of influence that they do, it came as no surprise to start seeing their CEO being a friendly fixture in the White House,” said Tracy Sefl, a longtime Democratic operative, who once worked for Walmart Watch, a group funded largely by organized labor to go after the retail giant.

When asked about Biden’s shift on Walmart and presented with the administration’s embrace of the company, White House deputy press secretary Andrew Bates maintained that the President was working with companies of all sizes, as well as union leaders too.

“When it comes to making historic infrastructure investments, ensuring our ports operate around the clock, or pushing to increase our trucking capacity, the President will continue fighting with a large coalition to improve our supply chains, lower costs for families and create good-paying jobs,” he said.

For years, Walmart has tried to dispel its boogeyman image among Democrats. In 2006, the company brought on board Leslie Dach, a veteran Democratic aide, to improve its reputation as executive vice president of corporate affairs.

The work was difficult. Biden wasn’t the only Democrat around that time to rail on the retail giant. Then-Sen. Hillary Clinton, who had been on Walmart’s board during her years in Arkansas, returned a campaign contribution from the company. Then-Sen. Barack Obama’s campaign, nevertheless, criticized her heavily for her time with Walmart. Even former Sen. Evan Bayh, a moderate from Indiana, appeared at an anti-Walmart rally, lamenting the “middle-class squeeze” the company facilitated.

Dach, who was brought into the Biden administration recently to help with Covid messaging, told POLITICO that the approach to improving relationships with Democrats was two-pronged. The first prong, he said, was creating some parity in campaign contributions. The second and more important prong, he added, was establishing trust with politicians through a series of initiatives that aligned with Democratic priorities.

Walmart’s efforts had some success in drawing Democrats into their corner. Michelle Obama visited a Walmart in Springfield, Mo. to celebrate the anniversary of Let’s Move and then-President Obama visited a Walmart in Mountain View, Calif. There, he praised the company for its efforts to employ renewable energy — “and Walmart’s pretty good at counting its pennies,” he joked. 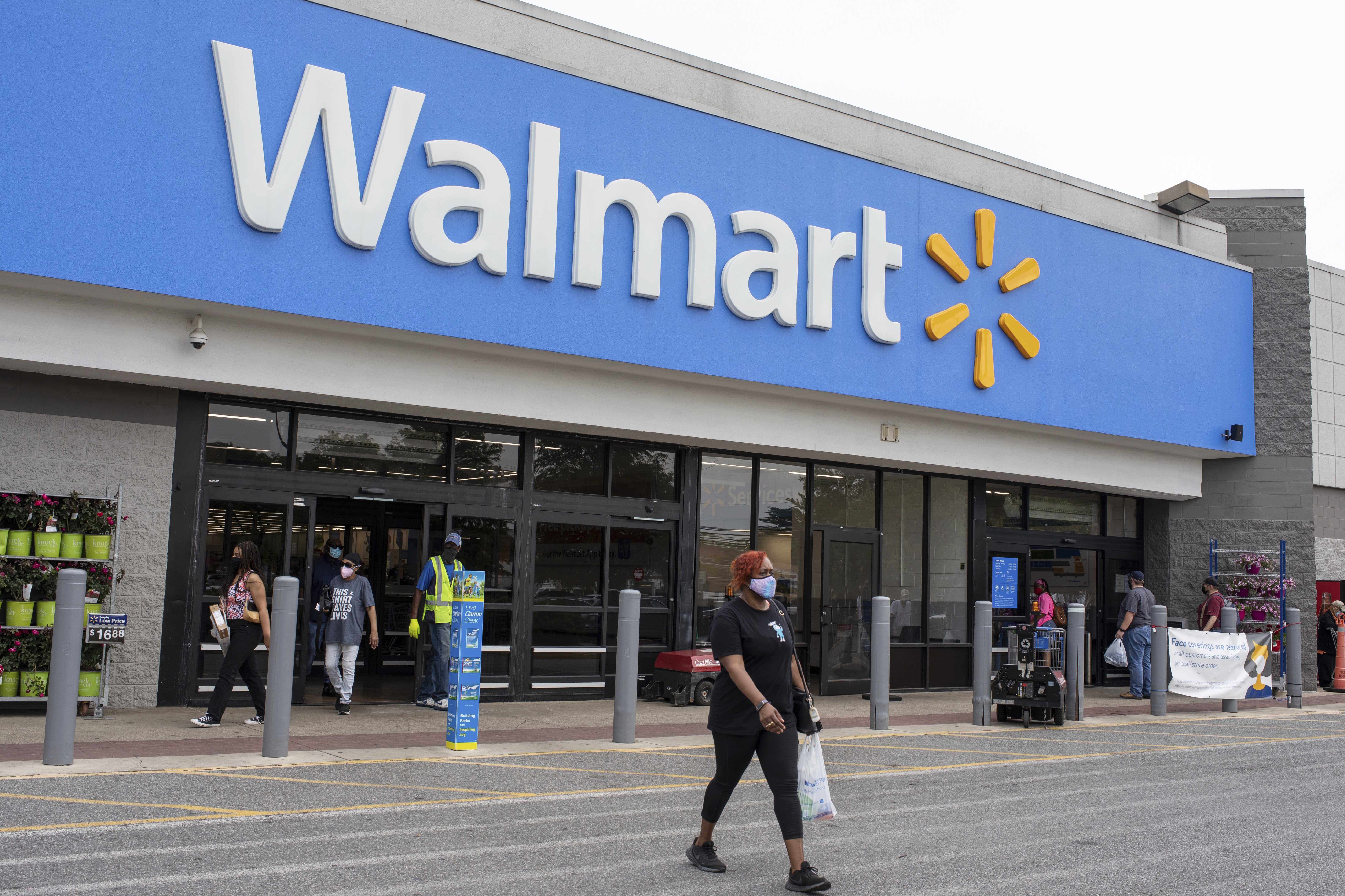 On some bigger policy matters, the company continued to take heavy criticism for its labor practices and poor wages. But it began moving on those fronts too. In 2015, it hiked its wages for its employees to $9 an hour. More recently, it announced it would hike its minimum wage to $12 an hour.

Walmart has continued to lean heavily on the federal government to subsidize the health care costs of its workforce, including when it dropped coverage for tens of thousands of them. But it also, unlike other corporate entities, embraced Obamacare. Andrew Stern, the former president of the Service Employees International Union, recalled a meeting to discuss Obamacare with the late Sen. Edward Kennedy (D-Mass.) and then-Walmart CEO Lee Scott. Kennedy noted that until that day he had refused to meet with the company’s representatives.

“Meeting with them was like meeting with the right to work committee, they were persona non grata in many Democratic circles,” Stern said.

Critics of the company say that much of what it is doing is window dressing. Sen. Bernie Sanders (I-Vt.) has charged Walmart with paying starvation wages while its executives profit handsomely. Other critics have noted that some of Walmart’s ballyhooed progressive movement has come in fits and starts. The company took guns and ammo off its shelves in the fall of 2020, only to quickly reverse course amid unrest. It has announced ambitious efforts to reduce its carbon footprint, though skeptics are waiting to see if it will actually follow through on their proposals. And while McMillon has sung Biden’s praises on issues related to the supply chain, he is also chair of Business Roundtable, an association of CEO’s fighting aggressively to stop the tax provisions in the Build Back Better bill.

But the universe of Walmart critics has also grown smaller over the years. Walmart Watch was absorbed by WakeUpWalmart.com, a group formed by the United Food and Commercial Workers, in 2009. The latter now appears to be defunct. WakeUpWalmart.com, which redirects to changewalmart.org, showed no press releases issued by the group since August 2019. And the online form to send an inquiry to the organization did not appear to work.

Sefl said that the absence of anti-Walmart institutions on the left did not mean that the company was or should be blessed for its current policies. And while she recognized the need for Biden to tout Walmart’s success as a reflection of his own, she encouraged him to push the company further.

“I would hope that such a pro labor president, that Biden is, that he knows that there is both a messaging and a policy opportunity to talk about improving Walmart’s purchasing practices,” she said. “I think Walmart has done an excellent job of elevating their changes while also tamping down the once loud criticisms of their core business model, and to me, that’s the inflection point that we’re at when we look at economic recovery and as we look at empty shelves because of an over reliance on imported goods there’s an opportunity for the administration to leverage its relationship with the company.”