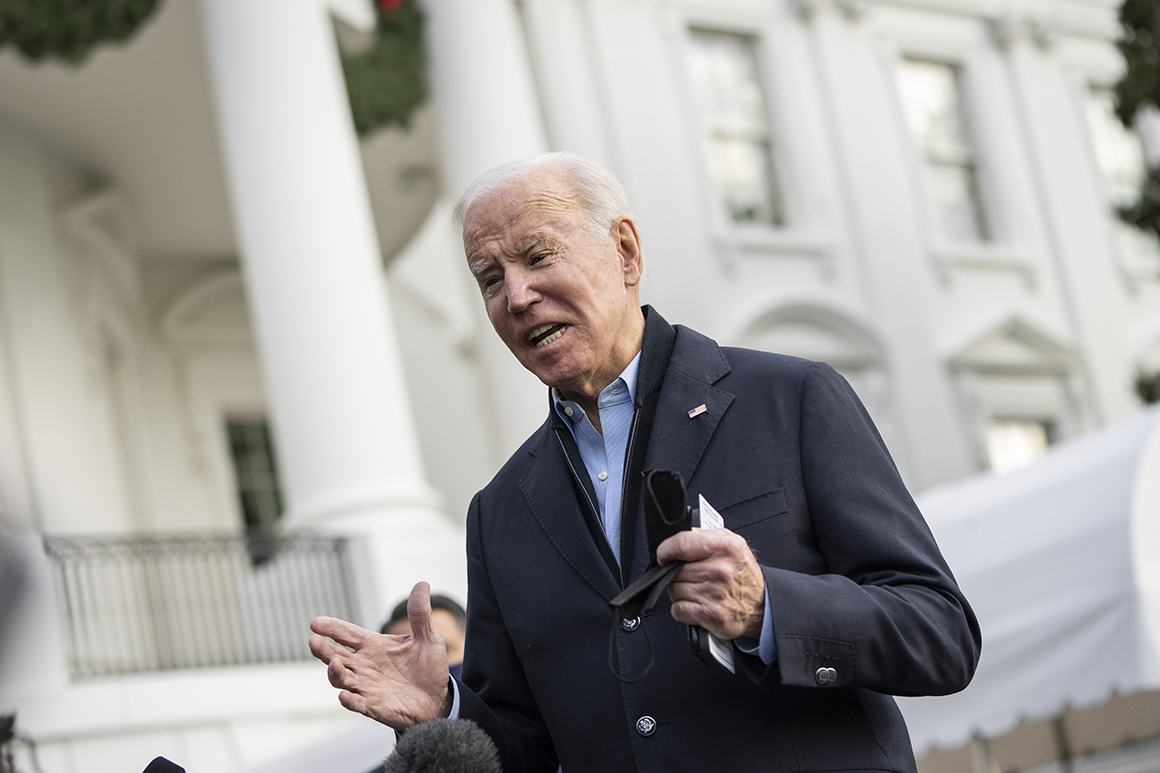 The White House wants to mark the new year with a forceful push for voting rights, portraying the protection of the ballot as a battle for democracy itself. But despite a renewed emphasis from an increasingly impatient and frustrated base, prospects for legislative success still look grim.

West Wing aides believe that fresh federal efforts to defend the ballot and install safeguards ahead of the midterm elections are likely to be dashed by some Democrats’ resistance to changing the Senate filibuster, a reluctance spearheaded by Sen. Joe Manchin (D-W.Va.).

The White House has been considering connecting the voting rights drive with the upcoming first anniversary of the Jan. 6 riot at the U.S. Capitol, making the case that the most sacred tenant of America’s democracy remains under siege one year after the insurrection fueled by the election fraud lies told by former President Donald Trump.

To strongly make that case, the president and his team had been hoping to clear the legislative deck by the Jan. 6 anniversary. But the president’s social spending bill, known as the Build Back Better Act, appears stalled for the foreseeable future in the Senate, with Manchin’s refusal to commit to the $1.75 trillion legislation seemingly certain to push the measure into early 2022.

Biden signaled on Wednesday that he’d be fine with prioritizing election reform for the time being, saying: “If we can get the congressional voting rights done, we should do it. … There’s nothing domestically more important than voting rights.” But, previously, White House aides had consistently signaled that they wanted the social spending bill first and voting rights second.

That sequencing has irked some of the president’s most fervent supporters, who fear he may get neither.

“The time is now. The urgency could not be more palpable than it is now,” said Rev. Al Sharpton, president of the National Action Network and a Biden confidant, who, like others, argued that voting rights should have been the administration’s top priority in the wake of the moves by nearly 20 Republican-led legislatures to tighten state election laws.

Echoing the sentiment of a growing number of Democrats who feel that Biden has simply not placed the defense of voting rights and elections at the center of his presidency, Sharpton said activists are now targeting Martin Luther King Jr. Day in mid-January as an unofficial deadline for at least showing some real progress on voting rights. He and other activists plan to ramp up their criticisms of Democrats — with potential threats to refrain from campaigning ahead of the midterms — if action is not taken.

“I don’t want to become too dramatic,” said Rep. Emanuel Cleaver (D-Mo.), “but voting rights may be the only thing we have to at least halt the trek away from democracy.”

So far, the president’s approach to voting rights and election reform has been scattershot. A fiery speech at the National Constitution Center in Philadelphia in July was accompanied by a series of executive orders but little else. Similarly, no White House actions followed the president offering another passionate defense of voting at the virtual Summit for Democracy last week.

The White House also has not played up the findings by the Jan. 6 select committee, which unearthed text messages from Trump chief of staff Mark Meadows that hint at coordination with Republican lawmakers to prevent the certification of Biden’s win. So far, the most direct actions have been taken by the Justice Department, which sued Texas this month over its redistricting maps, alleging a violation of the Voting Rights Act.

The lack of a sustained focus is owed, in part, to the nature of the presidency. Biden’s legislative initiatives have taken longer than expected to pass. On top of that, he’s had to manage a lingering pandemic, a violent drawdown from Afghanistan, and natural disasters, including this week’s tornadoes in Kentucky.

But some of it is owed to strategic differences within the ranks. There has been some divide within the White House as to how to mark the anniversary of the Jan. 6 insurrection. Some aides believe that it deserves a somber but significant remembrance, out of tribute to those who died but also as a full-throated condemnation of the assault on democracy at the Capitol.

Other aides believe a smaller commemoration is more appropriate, not wanting to elevate Trump’s lies or risk further inflaming partisan tensions over the 2020 election.

While the full scale of what the White House is planning remains unclear, Biden is expected to deliver a speech connecting the day to the defense of the ballot, aides said.

But aides also recognize that a full-court press on voting rights — even if good politics — would be doomed to fail without a change to the filibuster. And they are skeptical that they can bring reluctant Democrats on board for such changes. While Manchin has said he’s open to reforming the chamber’s rules in a bipartisan manner, he does not support nuking the legislative filibuster. Sen. Kyrsten Sinema (D-Ariz.) has warned that scrapping the filibuster could come back to haunt Democrats. White House aides, as such, have been instructed to avoid the phrase “filibuster reform,” which they believe has become toxic and spurs knee-jerk opposition.

Other Democrats are losing patience, however. Sen. Raphael Warnock (D-Ga.) delivered a passionate speech from the Senate floor this week pushing Democrats to act on voting rights, noting that the Senate just scrapped a 60-vote threshold to pass a debt ceiling hike. Rep. Jim Clyburn (D-S.C.), who has been in touch with Warnock, said he believes Democrats are “in a good place with the voting rights bill,” though it’s “not the timeline that I would want.”

As pressure ramps up, a group of Senate Democrats have been working on possible rule changes to the chamber that could, potentially, pacify the party’s more centrist members. Those senators — Angus King (I-Maine), Tim Kaine (D-Va.) and Jon Tester (D-Mont.) — met with Manchin and Majority Leader Chuck Schumer on Wednesday to discuss Senate rule reforms.

“The longer we wait the more mischief the states are performing,” said King.

But rules changes are complicated, take time and most Democrats expect the effort to come to a head in January. And few, if any, Democrats expect success unless Biden were to use the power of his office to influence centrist holdouts—something he has so far refrained from doing.

“His voice is critically important in telling the story that democracy is in fact under threat,” said John Podesta, former White House counselor to President Barack Obama, who argued that Biden should address the matter of voting rights directly in his upcoming State of the Union address.

“I want to see Biden start running people in and out of the White House,” said Rep. Anthony Brown (D-Md.). “I want to start by seeing the president using the full leverage of his office. It’s a crisis in democracy and the president needs to address it.”

If the White House needs a reminder of the progressive pressure they’re facing on this front, they don’t have to look far. Over the past week, roughly 20 college students from Arizona have been on a hunger strike outside the White House in Lafayette Square urging action on voting rights legislation. The group, affiliated with a political nonprofit founded by former Bernie Sanders campaign organizers, named Un-PAC, has met with Sinema on the issue and is expected to meet with Sen. Mark Kelly (D-Ariz.) on Thursday. The students asked for a meeting with Biden but so far have only been in touch with Justin Levitt, White House senior policy adviser on democracy and voting.

“We really wanted to talk to the Biden administration and show them that we’re here,” said Lauren Dorn, 20, an Arizona State University student and organizer with Un-PAC. Dorn had to end her hunger strike after a few days due to health reasons. “There’s hundreds and thousands of us across the country who believe in this issue.”