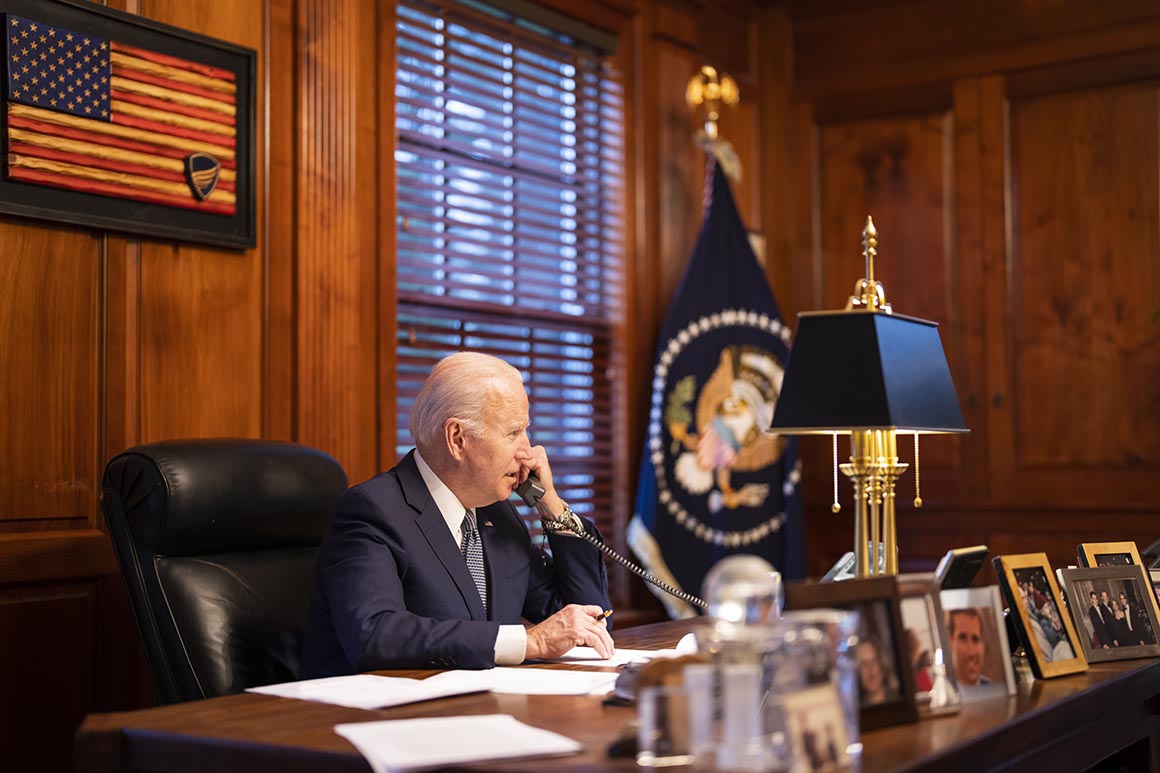 But they also expressed hope that more formal “strategic stability talks” between Washington and Moscow set for January on myriad issues could lead to a path out of the current crisis that Russia says is intended to prevent Ukraine from joining the Western alliance.

“President Biden laid out two aspects of the U.S. approach that will really depend on Russia’s actions in the period ahead,” a senior administration official told reporters after the afternoon call Washington time. “One is a path of diplomacy leading toward a declaration of the situation and the other is a path that is more focused on deterrence, including serious costs and consequences should Russia choose to proceed with a further invasion of Ukraine.”

The official said that includes “adjustments and augmentation of NATO force posture in allied countries” as well as “additional assistance to Ukraine to enable it to further defend itself and its territory.“

The Russian side, which has threatened in recent days that moves to include Ukraine in NATO would lead to a major war in Europe, appeared to strike a positive tone after the call.

“It is interesting that Ushakov kind of sounded an upbeat, optimistic note shortly after the call, saying that Biden had … reassure that the U.S. doesn’t have the intention of putting missiles in Ukraine,” said John Hardie, a Russia expert at the Foundation for Defense of Democracies, a hawkish think tank. “From the Russian side, they seem slightly more optimistic than they were overall.”

Pskai also relayed the president’s hopes for the more formal schedule of talks between the two governments on a host of topics, ranging from Ukraine to nuclear weapons and cyber attacks, as well as separate discussions at the NATO-Russia Council and the Organization for Security and Co-operation in Europe, which also includes Ukraine.

“President Biden reiterated that substantive progress in these dialogues can occur only in an environment of de-escalation rather than escalation,” Psaki said.

The senior administration official told reporters that the upcoming meetings will address a range of concerns about Russian behavior, yet “there will be some degree of overlap among the different conversations.”

“We will make very clear and come to a very clear understanding, and have already set about doing that, as to exactly what the agenda of each set of conversations will be and that is going to be some of the focus of the diplomacy over the next week, 10 days,” the official said.

Biden and Putin’s call was their second this month, after the American president warned his Russian counterpart three weeks ago that the United States and European allies would impose “strong” economic penalties and other punitive actions on Russia should it mount an invasion of Ukraine.

But this time, Putin requested the conversation.

The senior administration official described it as “part of a series of … end-of-the-year calls that President Putin has been engaged in.”

“But this was not sort of mere pleasantries,” the official added. “This was a serious, substantive conversation.”

Putin’s overture has sparked suspicion among some close observers of the crisis that he is trying to take advantage of Biden to maximize his next aggressive move.

“I’m concerned that what he is doing is trying to collect intelligence on Biden or setting the groundwork for what he intends to do anyway,” said Evelyn Farkas, former deputy assistant secretary of Defense for Russia, Ukraine and Eurasia in the Obama administration. “It’s fraught for him.”

“It is quite possible [Putin] has decided to invade,” she added. “I think Biden had to take the call, but to me it is not necessarily a good sign. Some people have said this might be Putin trying to escalate. I am afraid that is not the case, that it is the opposite.”

Russia has been building up its military forces and constructing new bases along the eastern border of Ukraine for months, including troops, armored vehicles and supplies that could indicate plans for a full and extended invasion.

Satellite images in recent weeks have shown little sign Moscow is pulling back — and even some signs of expanding — even as diplomatic efforts have inched forward.

The U.S. view remains that Moscow needs to pull back its troops from the border before any agreement that takes into Russia’s public concerns about NATO expansion can be addressed.

“For there to be real progress in these talks, for us to get to a place where we have security and stability in Europe … de-escalation rather than escalation will be required,” a senior administration official told reporters ahead of the call. “Obviously that will be a part of what President Biden communicates to President Putin.”

The Biden administration also insists it is prepared to send more military equipment to Ukraine to help it defend itself.

“We are prepared to provide Ukraine with further assistance to defend its territory and respond to a potential Russian occupation should a further invasion proceed in the coming weeks,” another senior administration official told reporters ahead of the call.

“This is a crisis of the Kremlin’s making,” said Simon Miles, an assistant professor at Duke University’s Sanford School of Public Policy and an expert on Russia.

“Hopefully the talks between Russia’s and the United States’ leaders are productive,” he added. “But in all likelihood, a solution will need to involve the Ukrainian government as well.”

Hardie says he is “pessimistic about the prospects for diplomacy and suspicious about what the Kremlin is doing.”

Putin’s overtures, he warned, could be a “smokescreen, a pretext for eventual military action.”