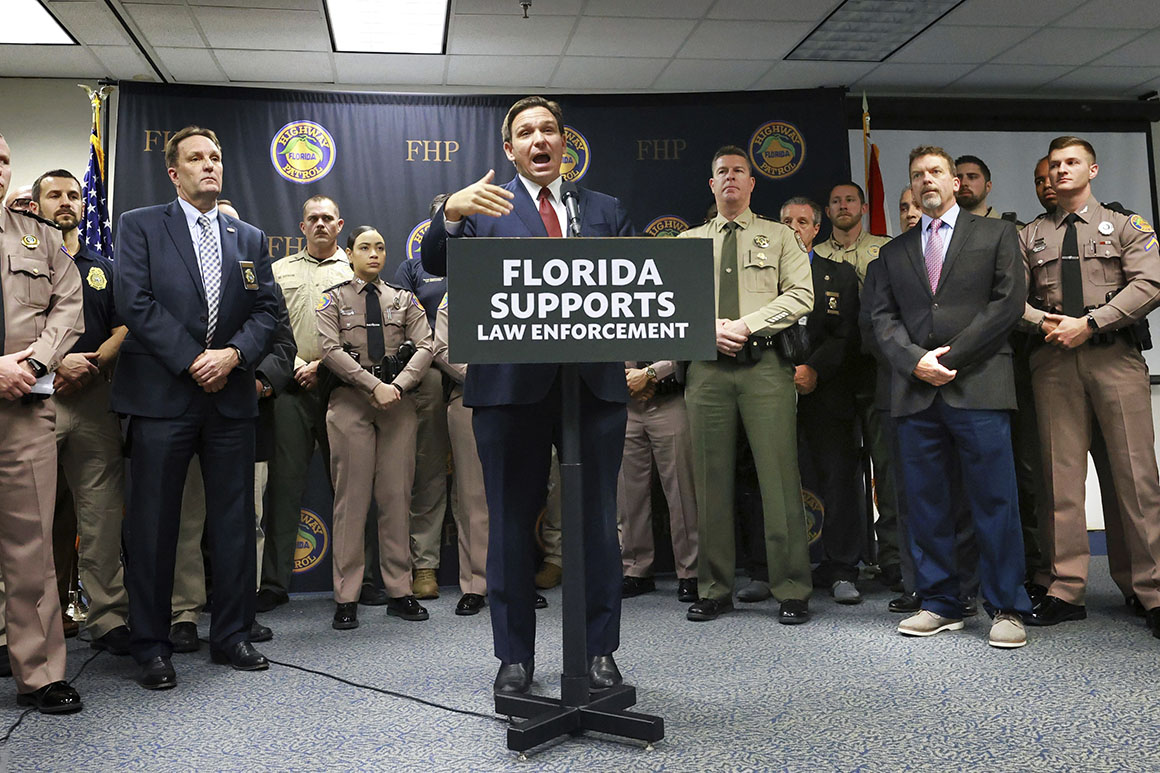 TALLAHASSEE — Ron DeSantis is building a campaign against Joe Biden — and he’s going to make the president pay for it.

The Florida governor on Thursday unveiled a $99.7 billion proposed spending plan that comes as DeSantis gears up for his 2022 reelection and continues to generate buzz as a top-tier potential 2024 White House hopeful. The governor’s budget is packed with federal stimulus funds from the Biden administration that DeSantis wants to use for his most politically popular programs, including a gas tax break and $1,000 bonuses for police and teachers.

The governor made it clear Thursday that he wants to use $3.5 billion from Biden’s American Rescue Plan to help fund nearly every high-profile piece of his budget, setting up a scenario where the Biden administration could pay for policies DeSantis will use to campaign on during his reelection bid.

“I think the most ironic piece about his budget is that the governor wants to take $1.2 billion in American Rescue Plan money and use that for the gas tax break,” state Rep. Anna Eskamani (D-Orlando) told reporters after the budget announcement. “As the governor continually attacks President Biden, the reality is we could not balance this budget, or give out tax breaks without President Joe Biden.”

DeSantis defended using Biden’s funds by claiming Florida was stiffed in the America Rescue Plan because more money went to states with higher unemployment. That generally meant that states that enforced economic shutdowns during the height of the pandemic received more funds, unlike Florida which locked down only briefly.

“We got the short end of the stick compared to these other states, that’s just the reality,” DeSantis said during a press conference announcing his budget. “They treated Florida worse … as a result of the fact that we had kids in schools and people employed … And, so, you had much better results in terms of money you were getting if you pursued those other policies.”

Beyond the fuel tax holiday, DeSantis also wants to use federal cash to fund $500 million to spend on Resilient Florida, an environmental grant fund lawmakers created last year. DeSantis is also seeking nearly $440 million to pay for $1,000 retention bonuses for teachers, first responders and law enforcement and $100 million for the Job Growth Grant Fund, a pot of economic development funding the governor has control over. DeSantis highlighted most of these proposals at press conferences in recent weeks.

The governor is also seeking $8.8 million in federal funds to create a program in his administration that would “assist the state’s efforts to protect against the harms resulting from illegal immigration.” DeSantis has consistently criticized the Biden administration over its immigration policies.

The budget must get approval from the GOP-dominated Florida Legislature.

DeSantis also highlighted that he wants to sock away a record $15 billion in various state reserve funds, including $10 billion in general revenue, which is the most flexible pot of funding. DeSantis said the massive reserve fund and the fuel tax cuts are tied to Biden’s “inflationary policies,” a frequent subject of DeSantis’ ire.

“If your income goes up 4 percent and the cost of everything goes up 5 percent, then you’ve actually lost ground,” DeSantis said. “So we are responding to that with what we are going to do with this gas tax holiday.”

“Leaving that in reserves during a time Floridians are struggling … is not a responsible budget,” said state Rep. Carlos Guillermo Smith (D-Orlando). “I don’t think we have ever had $15 billion in state reserves, which is larger than many other state budgets.”

DeSantis also wants $100 million to create the Florida State Guard, a 200-troop state-level volunteer force under his direct control. DeSantis has said the force would be used to help in emergency situations like hurricanes but faced strong push back from Democrats concerned the governor could misuse the proposed guards.

“This is horrifying,” Agriculture Commissioner Nikki Fried, a Democrat running against DeSantis in 2022, said on MSNBC after the proposal was announced earlier this month. “He’s not only forming his own army, but it’s an army that’s not accountable to anybody. Not to the people of our state. Not to the Constitution.”

DeSantis is also seeking to boost pay for new cops by 20 percent and pay for veteran police by 25 percent, while also giving $5,000 signing bonuses to every police recruit in Florida that is new to law enforcement. Lawmakers haven’t approved the plan but DeSantis has already taken credit for convincing dozens of police officers to move to Florida from New York — a Democratically-run state that Florida Republicans frequently criticize. Some of the officers who DeSantis touted during a September press conference came to Florida with significant prior disciplinary records, reported Fresh Take Florida.

DeSantis has signaled that a focus on supporting law enforcement will be a key part of his proposed budget as well as a political cudgel to whack Democrats as the midterms get going. During his budget press conference on Thursday, he brought up legislation he pushed for last year that, among many other things, made it more difficult for local governments to cut police budgets — a direct shot at the so-called defund the police movement touted by some progressive Democrats.

“We are not defunding police, I think all of them [Democrats] voted against our anti-riot bill that had a provision that said we are not going to allow local governments to defund law enforcement,” DeSantis said Thursday. “That was a very critical test of where you stand on that, and they stood on the side of defunding.”

Andrew Atterbury and Arek Sarkissian contributed to this report.