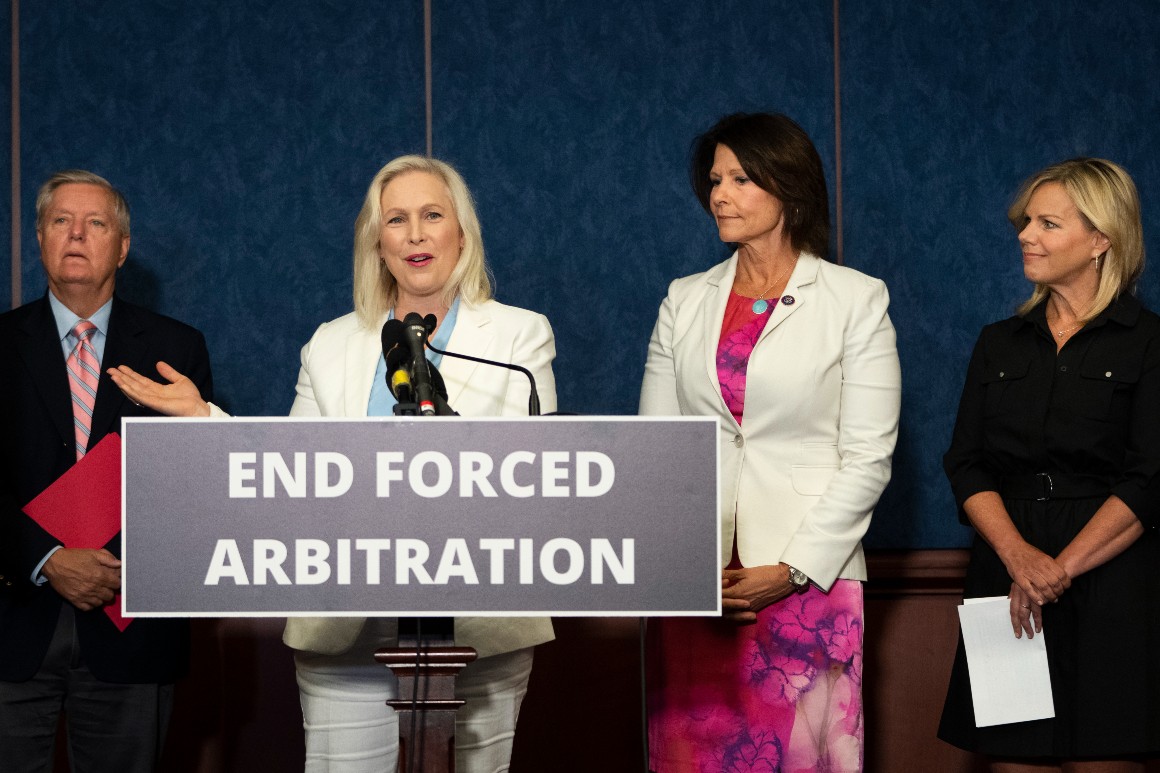 Four years after a national awakening to the pervasiveness of sexual misconduct shook Congress, lawmakers are the closest they’ve ever been to reforming private companies’ treatment of assault and harassment cases.

The Senate and House Judiciary Committees recently approved bipartisan legislation that would put an end to private employers’ use of forced arbitration — mediation between alleged victims and perpetrators that operates outside the traditional legal system — by allowing victims to decide whether they want to take their sexual harassment or assault claims to court instead.

It’s a rare collaboration between conservatives and liberals in an otherwise bitterly divided Congress. But exactly how lawmakers get the bill to President Joe Biden’s desk remains unclear. Proponents of the sexual misconduct reform bill are planning to see whether it can pass unanimously in the coming weeks without a time-consuming roll-call vote, or alternately whether it can hitch a ride on another legislative vehicle, according to a Senate Democratic aide who addressed planning on condition of anonymity.

“The evidence is in: Over time these employment contracts in the area of sexual harassment and sexual assault have buried the misconduct, and that needs to end,” Sen. Lindsey Graham (R-S.C.), a lead co-sponsor of the effort, said in an interview. “This will create societal change. It’s a big deal over time because … it will shed light on what is a legitimate problem: People abusing the employer-employee relationship.”

When the #MeToo movement hit Capitol Hill, less than a year after the inauguration of former President Donald Trump — who faced more than two dozen sexual misconduct claims from women — it ended careers in both parties. Nine lawmakers resigned or departed in a wave of harassment scandals that began four years ago this month. But while an overhaul of the Capitol’s handling of sexual misconduct and assault cases became law in 2018, Congress has yet to pass broader legislation that would impact private companies.

With Trump out of office and prominent misconduct cases largely faded from public view, however, the bill has acquired unique momentum. On a Senate Judiciary Committee that’s known for its partisan divide, especially in recent years, the forced arbitration bill counts support from GOP hardliners like Missouri Sen. Josh Hawley and progressives like Hawaii Democratic Sen. Mazie Hirono. The panel’s approval of the Gillibrand-Graham bill by voice vote is a positive sign for its prospects on the Senate floor.

“We have the votes. It is widely bipartisan. The support in the Senate is extraordinarily good,” Gillibrand said in an interview. “We have senior Republicans like Lindsey Graham and Chuck Grassley, plus a lot of the female leaders such as Lisa Murkowski, Susan Collins, Shelley Moore Capito and [Marsha] Blackburn. So we have a really good coalition.”

The House Judiciary Committee advanced the bill two weeks ago, though the full chamber has yet to schedule a vote on the legislation. Two days after the panel’s consideration of sexual harassment on the job, Zia Chishti, the chief executive of data and software company Afiniti, resigned after former employee Tatiana Spottiswoode testified to lawmakers that he had sexually assaulted her.

Opponents of forced arbitration argue that the process is skewed in favor of employers, keeping misconduct allegations and resulting investigation findings confidential and requiring employees to settle their case outside a court of law.

Business groups like the U.S. Chamber of Commerce counter that arbitration can be less expensive and swifter than taking a case to court. The Chamber backed an alternative proposal recently floated by Sen. Joni Ernst (R-Iowa) that would eliminate mandatory arbitration completely for on-the-job sexual assault claims. Under Ernst’s bill, companies could still arbitrate sexual harassment claims if they meet a list of criteria, including allowing victims to talk about their cases publicly if they choose to.

Ernst said Tuesday that she is working with Gillibrand on making changes to the original bipartisan legislation since “this is the one that’s moving” and that the duo — who worked together on bipartisan military sexual assault reform — is getting “much closer.” 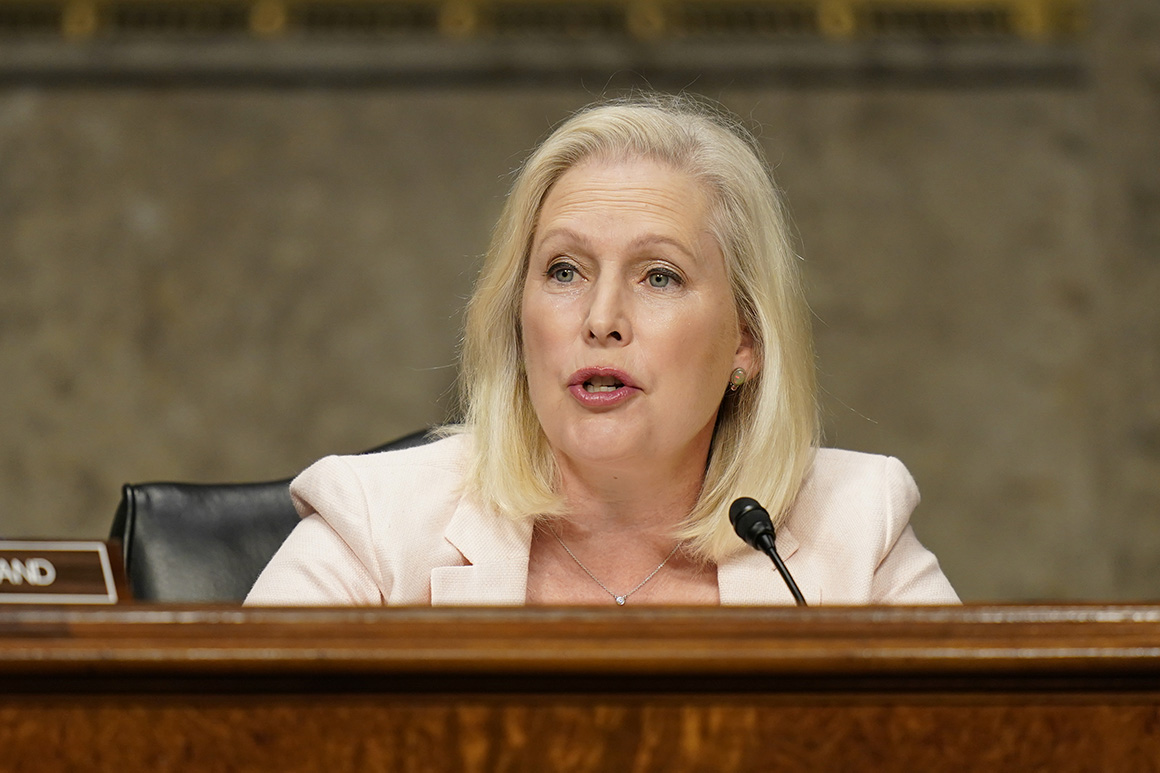 Among the outstanding concerns is the bill’s formal definition of sexual harassment. Ernst added that while she initially opposed the Gillibrand-Graham bill’s collective bargaining provisions, they were removed during the committee markup shortly after she introduced her alternative.

During the committee meeting, the legislation was amended to clarify that regardless of the type of contract a worker is under, he or she has the option to either take claims to court or go through the arbitration process.

“I feel a lot better about the bill. If we continue to make progress before it hits the floor, I would be much more likely to support it,” Ernst said in an interview. “The collective bargaining piece was probably the biggest piece of opposition that I had. I think we’re getting to a good place … I’m glad that finally it’s getting the attention it needs.”

It’s not clear yet to what extent business groups will lobby against the Gillibrand-Graham legislation. The U.S. Chamber of Commerce hasn’t publicly taken a position on the bill and referred POLITICO to its letter supporting Ernst’s alternative.

“Listen, if I’m a business person I’d want to limit legal exposure, and arbitration in business matters is OK,” Graham said. “But this is not a business matter. This is misconduct directed toward individual workers.”

For survivor advocates, the legislation is long overdue. Julia Duncan, senior director of government affairs at the American Association for Justice, attributed Congress finally acting on the issue to the fact that mandatory arbitration “has become so prolific” and because “everything that happens to a person at work is subject to forced arbitration.”

“It’s really difficult for members of Congress, any member of Congress, to not agree that the system has gone terribly wrong,” Duncan added.

Nicholas Wu and Burgess Everett contributed to this report.