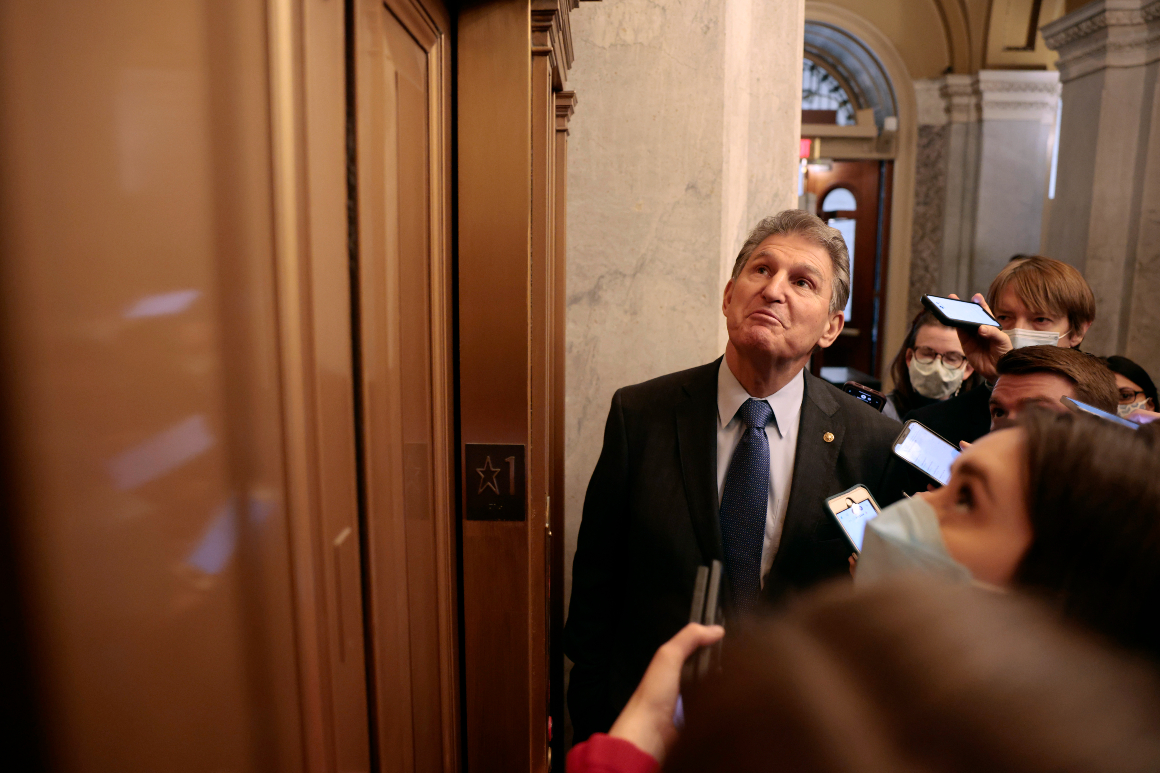 It seems to defy logic: Democrats are ending a year in which they passed trillions of dollars for pandemic aid and infrastructure not in celebration, but instead dogged by failure.

In an alternate universe, a $1.9 trillion coronavirus relief package paired with a $550 billion bipartisan infrastructure law would make for a very successful first year for President Joe Biden with an evenly split Senate. But Democrats set sky-high expectations for their climate and social spending bill, not to mention other highly ambitious legislation, that Biden and party leaders didn’t meet.

On Sunday, Sen. Joe Manchin (D-W.Va.) delivered a fatal blow to his party’s push to enact the $1.7 trillion social spending legislation, telling Fox News there was no way he could support the House-passed version. There’s still no clear path to an elections reform deal, given Manchin’s and Sen. Kyrsten Sinema’s (D-Ariz.) reluctance to change Senate rules. Forget the $15 minimum wage and immigration reform Democrats have tried and failed to jam into their party-line bills, or the dissolved bipartisan talks about reforming law enforcement and gun control.

As 2021 draws to a close on an exceedingly sour note for their party, some Senate Democrats conceded in recent days that they need to talk more about accomplishments — and less about aspirations.

“Our greatest skill is not how we sell our programs. We spend a lot of time trying to create programs that really help people,” said Sen. John Hickenlooper (D-Colo.), a freshman who flipped a GOP seat last fall. “We created a bipartisan infrastructure bill. When I started, people told me it was impossible, it would never happen. So on that level it’s successful. Is it successful on a grander level? No.”

“The true problem is, we haven’t talked about what’s been accomplished near enough, and I think that’s a bigger problem than setting expectations,” added Sen. Jon Tester (D-Mont.). “They’re both dangerous, by the way. Setting expectations too high? I don’t know if that’s the problem, as much as just letting people know what we’ve done.”

After claiming two GOP-held Senate seats in January, Majority Leader Chuck Schumer began his reign vowing that the Senate would pursue a “big and bold” agenda. But that promise depended on full unity in a 50-50 Senate, where any single senator has veto power. And Manchin and Sinema never hid their reservations.

During a video call with outside progressive groups last week, Schumer expressed frustration with the current impasse on voting rights but insisted there was progress with Manchin, according to a source familiar with the call. Schumer encouraged activists to be respectful in their push to pass elections reform, in order to avoid alienating Sinema and Manchin, the source said, and said that effort would continue in January.

Internal caucus discussions about changing Senate rules to pass the legislation will continue this week, according to a Democratic source.

Despite voting to move forward on a $3.5 trillion budget blueprint, Manchin told Schumer in July that he was open to only a $1.5 trillion social spending bill, with several constraints. While that number increased by hundreds of billions of dollars in ongoing conversations with the White House, Manchin still had concerns about several elements of the measure, including paid leave and energy provisions as well as the length of its boosted child tax credit.

Manchin’s and Sinema’s opposition to changing the chamber’s 60-vote threshold also did not shift, no matter how many meetings the party held with them. There’s a year left for legislating before the midterms, but Washington is now entering a historically less-productive election season.

“Some people have just been unrealistic about how long it takes to get things done,” said Sen. Jeanne Shaheen (D-N.H.). She said Democrats need to reorient their rhetoric around infrastructure, fighting Covid and Biden’s left-leaning executive actions as president: “It’s important to remind people about it.”

Democrats’ expectation-setting began with a presidential primary that shifted the party’s mainstream leftward with debates about killing the filibuster, Medicare for All and expanding the Supreme Court. Though Biden always struck a more centrist tone than his primary rivals, those discussions set the stage for his unveiling of a multitrillion-dollar agenda that demanded lockstep unity in the Senate and left room for just a handful of defections in the House.

Several Senate Democrats pushed back on the suggestion that they set unrealistic expectations this year, noting that there’s still time to get more done before the midterms. They also pointed to the Senate approving more than 40 judicial nominees and passing legislation to compete with China, in addition to enacting the two major pieces of legislation.

“What’s the alternative? I think the alternative is to tell people what they can’t have and why, and that’s a heck of a way to govern,” said Sen. Brian Schatz (D-Hawaii). “I don’t think there’s any other way to do it, other than to try to govern in the way that you campaigned, which is to try to accomplish everything that you promised. But as they say, you campaign in poetry and govern in prose.”

Still, Democrats took fulfilling their campaign promises a step further. Schumer repeatedly said “failure is not an option” on voting rights, despite its long-at-best odds, and pushed his caucus to prepare for a vote before Christmas on the spending bill.

Democrats kept saying their goal was to finish those two items by the end of the year, even after it was already clear the social spending bill was stalled and voting rights could not pass — an effort reminiscent of Republicans’ repeated pursuit of Obamacare repeal, for weeks after Sen. John McCain (R-Ariz.) killed that push.

Democrats “made so many promises. What one wants to try to do is under-promise and over-deliver,” said Sen. John Kennedy (R-La.). “They did the opposite.”

One glimmer of hope for Democrats: Manchin initially opposed the party’s elections bill, then helped write another version that he could get behind. Biden’s climate and social spending bill could, in theory, follow the same contours.

But this time, Manchin said Democrats should set expectations a heck of a lower than they have this past year.

“I will continue working with my colleagues on both sides of the aisle to address the needs of all Americans,” Manchin said Sunday. “And do so in a way that does not risk our nation’s independence, security and way of life.”