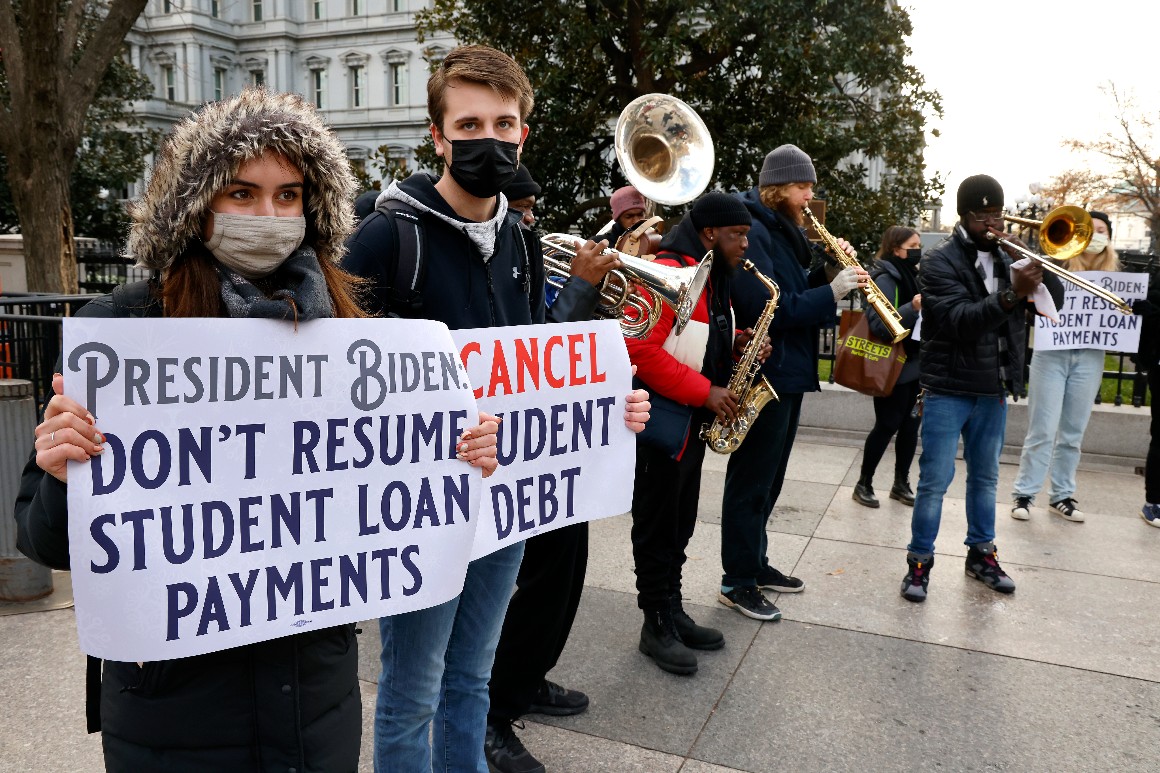 The Biden administration is considering extending the freeze on federal student loan payments amid the surge of Covid cases and pushback from Democrats who objected to sending student loan bills to tens of millions of Americans in the coming weeks.

Education Department officials have for months publicly insisted that student loan payments would begin on Feb. 1 when the existing pandemic relief — which was extended several times by both the Trump and Biden administrations — is set to expire.

But on Tuesday, an Education Department official indicated that the restart of student loan payments could again be postponed.

“Later this week, we will be announcing whether to extend the pause further,” an Education Department spokesperson said in a statement to POLITICO.

The shift in the administration’s thinking on the fast-approaching Feb. 1 deadline for restarting payments comes as the White House faced a torrent of pressure from Democrats seeking another extension of relief.

The White House had previously said it was evaluating the impact of the Omicron variant but said it was still preparing to restart the collection of monthly payments on Feb. 1.

POLITICO reported over the weekend of a tense meeting between White House officials and student debt activists who want Biden to extend the relief and use executive action to cancel large swaths of outstanding student loan debt. White House officials weren’t persuaded at that time to extend the relief, POLITICO reported, citing people familiar with the meeting.

Democrats on Capitol Hill had been pressuring the Biden administration to extend the relief.

Some progressives have been more blunt about the political consequences they fear next year unless the Biden administration takes more aggressive action to help student loan borrowers — especially after the collapse of negotiations over Build Back Better.

“With BBB delayed, Child Tax Credits will expire and student loans will restart within a matter of weeks. Working families could lose thousands of $/mo just as prices are rising,” Rep. Alexandria Ocasio-Cortez (D-N.Y.) said on Twitter on Monday. “That alone is reason for @POTUS to act on student loans ASAP – w/ either moratorium or cancellation.”

Rep. Ro Khanna (D-Calif.) said on Twitter that the Biden administration’s plans to restart student loan payments “makes no sense.” He added: “Awful on the substance and awful politics. We need to do better to deserve victory in 2022.”

A slew of other Democrats have also urged the Biden administration to extend the relief.

“We need to address student debt in general, but in the meantime an extension would be a step in the right direction,” said Sen. Raphael Warnock (D-Ga.), who is up for reelection in 2022. He said that the relief would help both “struggling families in the midst of a pandemic” and the economy overall.

Warnock led a letter with 13 other Senate Democrats to Biden earlier this month calling on the administration to at least continue to keep interest rates at 0 percent on federal student loans even if monthly payments resume. Sen. Chris Van Hollen (D-Md.), who signed onto that letter, said that he thought the administration was considering an extension of relief. “I don’t know what the chances are right now, but we are pushing them pretty hard,” he said on Friday.

A coalition of labor and student and consumer advocacy groups have also called for an extension of the relief — as have several think tanks aligned with the Biden Education Department.

Republicans, meanwhile, have previously called for the Education Department to restart student loan payments, citing the growing cost to taxpayers of waiving interest and deferring payments. The department has estimated that the pandemic relief for student loans in fiscal year 2020 added nearly $42 billion to the cost of the student loan program; in fiscal year 2021, it cost an additional $53 billion.

More than 40 million Americans have benefited from the federal government’s emergency relief program for student loans, which began as the pandemic took off in March 2020. Congress paused interest and monthly payments for federal student loan borrowers in the CARES Act — which the Trump and Biden administrations subsequently extended through executive action several times.

Most recently, in August, the Biden administration enacted what it called a “final” extension of the relief, which is set to expire at the end of January.

“Since Day One of the Biden Administration, we’ve been hard at work delivering meaningful relief to student loan borrowers,” the Education Department spokesperson said in a statement on Tuesday. “That started with an extension of the pause on federal student loan repayment until January 31, 2022. To date, the pause has saved 41 million borrowers tens of billions of dollars.”

Department officials have been sending notices to borrowers about the restart of payments and had been also planning ways to soften the blow of the restart of payments next year. Officials were looking at providing an initial 90-day grace period for missed payments as well as a sweeping plan to expunge the defaults of borrowers who were struggling even before the pandemic. Those plans have been discussed internally within the administration but not yet publicly announced.

Last week, Education Department officials announced that they would allow borrowers to more easily participate in income-based repayment plans by accepting self-certification of their income, rather than requiring them to submit tax documents.

Department officials urged outside groups to help them get the message out about the looming restart of payments on Feb. 1 during a webinar last week.

Rich Cordray, the head of the Office of Federal Student Aid, who is overseeing the restart of student loan payments, said during the webinar that a smooth transition for borrowers was his “top priority” in the coming weeks.

“It has many moving parts we’re carefully thinking through, and there are new developments almost every day, so please stay tuned.” Cordray said.