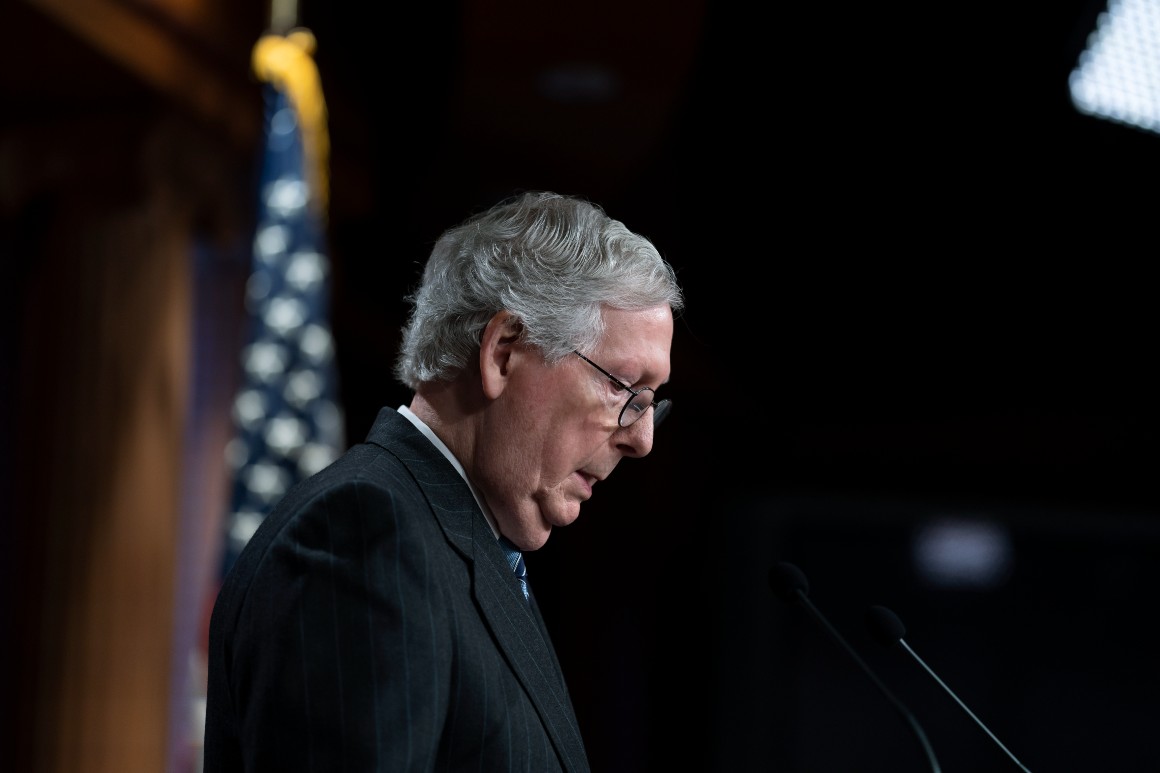 Former President Donald Trump has hit a wall in his efforts to oust Mitch McConnell as GOP leader.

Despite months of attacks, the Trump-led campaign to depose the Senate minority leader has resulted in firm pledges from just two Republican candidates and no senators, and it has failed to turn up a formidable challenger to run against McConnell.

Inside the Capitol, conservative senators shrug at the question, revealing a lack of appetite even among the GOP’s anti-establishment wing and continued strong support for McConnell as leader.

Voters “care more about what you do as a senator, what you bring up, what you voted against, how you fight for it,” said Sen. Tommy Tuberville (R-Ala.), who won in 2020 with Trump’s endorsement and believes McConnell is doing “a good job.”

The former president, who remains critical of McConnell for declining to help him overturn the results of the 2020 election, has ramped up his calls for the Kentucky Republican’s ouster from leadership in recent weeks. This week alone, Trump issued several official statements lambasting McConnell, saying the GOP leader “saved the Democrats” by striking a deal to allow them to raise the debt ceiling, which caused some consternation within the Senate GOP.

“How this guy can stay as Leader is beyond comprehension—this is coming not only from me, but from virtually everyone in the Republican Party,” Trump wrote Thursday. “He is a disaster and should be replaced as ‘Leader’ ASAP!”

The barrage of attacks on McConnell have been amplified by Fox News hosts Tucker Carlson and Sean Hannity, who have also gone after the GOP leader on air this fall. Carlson, during a segment last week, announced that his show would begin regularly highlighting problems with McConnell, whom he described as “an instrument of the left.”

Still, anti-McConnell sentiment has yet to become a dominant theme on the campaign trail ahead of 2022 elections. Republican campaign staffers in multiple states said their candidates have so far received only one or two questions at events about their support for McConnell — far short of a rallying cry from the conservative base.

To date, just two prominent GOP Senate candidates have called for McConnell’s ouster — Kelly Tshibaka, an Alaska Republican who is challenging incumbent Sen. Lisa Murkowski, and Eric Greitens, the former governor of Missouri who is running for a seat being vacated by retiring Sen. Roy Blunt.

“You’re going to see a whole lot of leaders in the Senate, like me, not support Mitch McConnell for leadership because he’s anything but a leader,” said Tshibaka, who is challenging one of Trump’s top targets in the chamber.

Tshibaka, who made the declaration Monday on Steve Bannon’s “War Room” podcast, is so far the only Trump-endorsed candidate to publicly reject McConnell. Greitens, who in September became the first 2022 Senate candidate to vow to oppose McConnell as leader, also did it on Bannon’s popular conservative show. Trump has so far not endorsed in the Missouri race.

Aside from Tshibaka, Trump-endorsed Senate candidates elsewhere have declined to take the bait on the McConnell issue, suggesting Trump’s now yearlong crusade against the Senate Republican leader has failed to emerge as an effective litmus test in Senate primaries.

That’s despite Trump’s status as the de facto leader of the Republican Party and his widespread popularity among GOP voters — 83 percent of whom have a favorable opinion of him. McConnell’s favorability rating, by contrast, is 41 percent, according to a new poll from POLITICO and Morning Consult.

In North Carolina’s Senate race, Trump-backed Rep. Ted Budd has repeatedly declined to answer whether he supports McConnell. In a statement to POLITICO this week, his campaign adviser, Jonathan Felts, said Budd is focused on winning.

“Our only thought on future leadership elections is that we want to do our part to ensure that the Republican Leader is the majority leader, not the minority leader, so we can stop Joe Biden’s liberal agenda,” Felts said.

“Gov. McCrory had a great discussion with Sen. McConnell before deciding to run for the Senate, and he will absolutely support him for leader,” said Jordan Shaw, an adviser on McCrory’s campaign.

McConnell declined to comment for this story. When asked Thursday about Trump’s push to replace him as leader, the Kentucky Republican declined to engage, only telling reporters “good try.” His advisers say the GOP leader is only focused on winning back the majority — and point out that no one has ever voted against McConnell as leader, a position he has held since 2007.

The last senator to pledge to vote against a party leader, Arizona Democrat Kyrsten Sinema, ended up not opposing Chuck Schumer because there was no alternative to consider.

Trump-endorsed Senate candidate Rep. Mo Brooks (R-Ala.) — whom McConnell opposed in a 2017 Senate primary — told POLITICO earlier this month he wouldn’t rule out supporting McConnell for leader, an election the Republican conference has every two years. But he also made clear McConnell is not his favorite Republican, and he would support McConnell “if he’s the most conservative.”

“There are some that he’s more conservative than, and some not,” he added.
Tuberville said Brooks is “seeing from the outside of what we’re doing — he doesn’t see the inside of the meetings and the talks and the strategy and all that.”

McConnell’s strength in the GOP was on display at a party lunch on Thursday when he was praised by roughly half the caucus for his leadership, according to a senior Republican aide briefed on the gathering. Conservative Sens. Mike Lee (R-Utah) and Ron Johnson (R-Wis.) touted McConnell’s decision to hold open a Supreme Court seat in 2016, while moderates Murkowski and Sen. Susan Collins (R-Maine) also delivered warm words for McConnell.

Other Republicans trying to distinguish themselves in the crowded Missouri primary — including Rep. Billy Long, a longtime Trump ally who is angling for an endorsement — have declined to join Greitens in opposing McConnell, even as the former governor has tried to make it a central issue in the campaign.

“We believe every candidate running that wants to call themselves MAGA should be asked the question,” said Dylan Johnson, Greitens’ campaign manager. “Are they going to support Mitch McConnell or not?”

Long said in a recent interview that he wouldn’t take that same step.

If Republicans are in the majority “and the only one on the Republican side is Mitch McConnell, you can’t tell me that Eric Greitens is not going to vote for him,” Long said. “I mean, it’s a great talking point. I’ll give it to Eric.”

State Attorney General Eric Schmitt’s campaign did not respond to an inquiry about his position on the GOP leader, while Rep. Vicky Hartzler said in a statement she was “not beholden to anyone in Washington” and would “vote for leaders who stand up against the liberal madness spewing from a toxic woke minority.”

In Ohio, where Trump has also yet to endorse in the contentious Republican primary, only frontrunner Josh Mandel’s campaign responded to POLITICO’s inquiry about his position on McConnell.

His spokesperson pointed to Mandel’s previous comment about the issue, where he questioned whether anyone was running against McConnell and said he wouldn’t “entertain hypothetical situations that don’t even exist in reality.”

J.D. Vance, the author of “Hillbilly Elegy” who has recanted his past remarks disparaging Trump and has sought to portray himself as a born-again MAGA devotee, in September told conservative podcast host Jack Murphy he had misgivings about McConnell continuing as leader, but came short of vowing to oppose him.

“I have no idea who should be the majority leader of the Senate,” Vance said on the podcast. “I think that McConnell has clearly shown he’s a little, sometimes a little out of touch with where the base is.”

Later in the interview, Vance said it was “time we move beyond the very old leadership class that’s dominated the Republican Party for a long time,” though his campaign did not clarify to POLITICO whether he intends to actually vote against McConnell — who personally encouraged Vance to run for Senate in 2018 — if elected.

Sen. John Cornyn (R-Texas) said candidate announcements about opposing McConnell are “designed for an audience of one”: Trump.

“I’ve been through a few leadership elections here, and I’ve seen a lot of people on the outside try to influence those elections,” Cornyn said. “And I’ve never seen it work because people are making their own evaluation based on a lot of different criteria about who they want their leaders to be.”