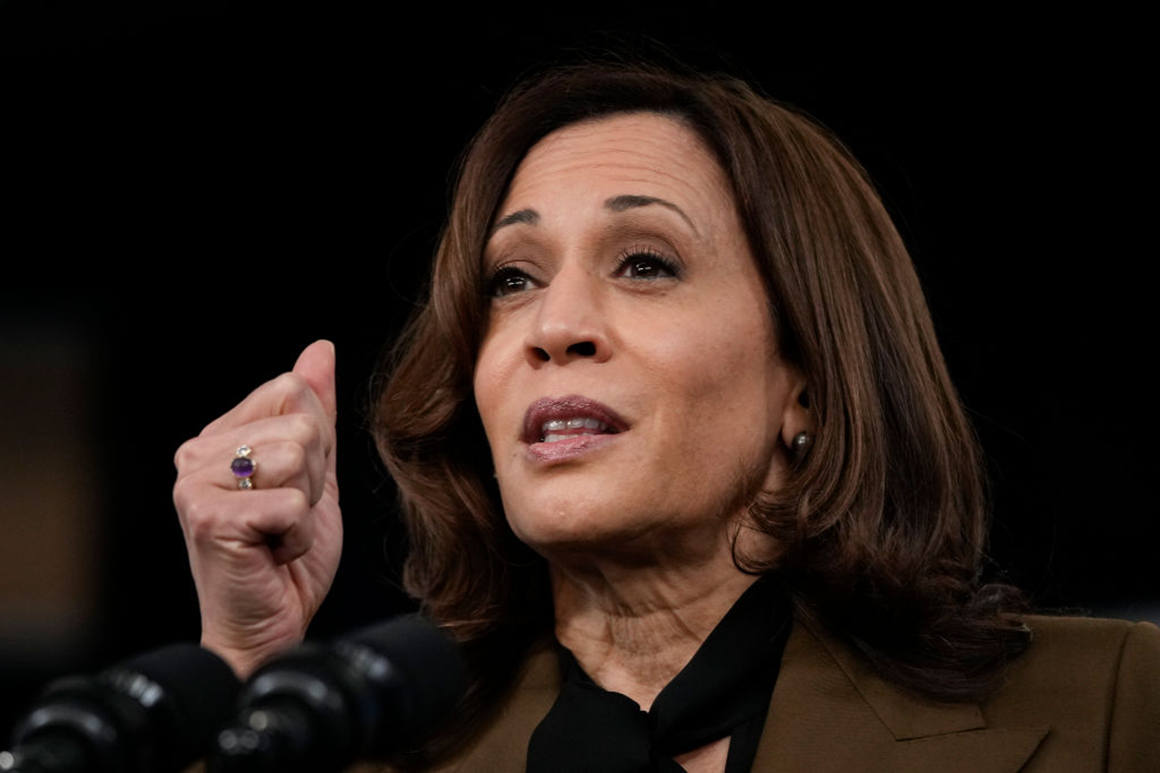 When Vice President Kamala Harris walked into her ceremonial office on Monday, a room full of Black women greeted her there in-person and on Zoom, waiting for some deliverables.

In the private meeting, nearly 20 members of Black Women Leaders and Allies, a coalition of groups focused on civil rights issues, shared their recommendations on how the Biden administration could strengthen the right to vote without legislation passed by Congress, according to officials in attendance. And senior aides to the VP ticked through a long list that focused on updates on domestic and foreign policy priorities for Harris — from the widely known to the more obscure.

Underneath the policy talk was a more personal appeal from the assembled women, one that reflected a collective desire to see Harris prove her detractors wrong. The Black community, they stressed, wanted to see more of her, and they wanted to be called on more to help out where they could, serving as her “ambassadors.” There was a sense of shared protectiveness over the accomplishments of Harris as the first woman of color to serve in the executive office, with multiple women who attended the meeting saying they wanted to make sure that the first chance that Black women have to lead is successful.

“Her failing is not an option,” said Shavon Arline-Bradley, president and chair of D4 In Action. “One thing we talked about is ensuring that she has ambassadors that can actually speak to this. Kind of connecting to her personally, who is Kamala? The entire person, the politician, the leader, the wife, the mother. Connecting [all of] that does make our mission as black women fighting for this work even more important than ever.”

The talk was half-strategic, half-cathartic for the group. It came amid the beginning of a new chapter for the vice president, one in which she will soon bring on new staff and hopes to fine-tune her role in the administration. But it also was a reunion of sorts. Harris had last convened with the group over the summer. Monday was the follow up.

Harris urged those in attendance to give it to her straight, attendees said: What are people saying? she asked. And when they suggested the need for more public updates on what she’s been working on, Harris seemed receptive, including expressing openness to holding town halls on various topics she’s working closely on — from voting rights to other issues facing Black people in the country. At another point, she said she’d have aides look at the calendar for the remainder of the year to see if there were already scheduled events at which she could possibly appear, attendees said.

“She said she was Zoom’d out,” said Ebonie Riley, senior vice president of Policy & Strategic Partnerships at National Action Network. “We offered a town hall. Have her come and answer some of the questions for our community and that could range from Black women and young Black people, and the community as a whole. And that way, she’s not put in a position to kind of have it come through the administration. She’s invited to an event where we can kind of give our community an update, and she was open to that. She wanted to explore that.”

White House aides say the conversation is part of a “whole of government approach” to shoring up voting rights and other issues. It took place as stories of internal discord in the vice president’s office have become the norm, fed by exits of key aides and concern from allies that Harris is being forced to walk a tightrope while serving as Biden’s No. 2. When Harris is at work on Biden’s largest priorities — namely a package of infrastructure and social spending bills that’s been moving through Congress all year — her own presence often isn’t noted. But when she’s leading on other issues not always on the national radar, it can be hard to get attention.

“Stories [about Harris] focus more on style than substance,” a source familiar with the meeting said. “Naturally, there’s an element of creating a new construct. That’s part of what she’s doing — [along with] the team. And she’s doing a lot more than she gets credit for.”

“So those are some of the ways that we make sure people have access to the ballot, access to registration, access to information,” said Melanie Campbell, president and CEO of the National Coalition on Black Civic Participation, who helped to convene the meeting with the vice president. Campbell pointed to the tangible outcomes of the meeting as proof that the drumbeat and pressure from voting rights advocates has been working.

The group also covered the so-called mom-nibus, provisions within the larger Build Back Better Act that specifically target families, women and children and how Harris and the administration can better connect the policies they are working on to the everyday people who are impacted.

On Tuesday, Harris addressed the first ever Maternal Health Day of Action Summit where she announced more than $150 million worldwide in investments from companies like CVS and Merck, and nonprofits to fight inequities in maternal health. Harris also announced the administration’s moves to deal with the issue including releasing new guidance to help expand postpartum coverage and creating a new designation of “birthing-friendly” hospitals, the first time Health and Human Services has done so. It’s an issue Harris has worked on since she was California Attorney General.

“Regardless of income level, regardless of education level, Black women, Native women, women who live in rural areas are more likely to die or be left scared or scarred from an experience that should be safe and should be a joyful one,” Harris said in her remarks. “Maternal mortality and morbidity is a serious crisis and one that endangers both public health and economic growth, which means everyone is impacted by it. Because just think about it: Mothers are the backbone of our economy, and their children are the future of our economy.”

As Harris went around the room Monday, asking the women about policy areas they cared about, there was an explicit request for “creative ways” to connect to average Americans, especially the Democrats’ bedrock constituency: the Black community.

“She was asking for clarity on how to best touch the everyday American rank and file who may or may not be living Beltway life like we do,” said Arline-Bradley, “She said ‘I want the message to resonate with the Beltway and beyond, outside of Washington, D.C. How do I get that message out?’”

With an ongoing pandemic and a 50/50 Senate where the vice president has to be around to break tie votes, Harris’ ability to travel has been impeded, some of her aides have lamented. But the women she met with on Monday also left with a sense that the administration acknowledges there’s more it can and should be doing. They understand, as one attendee put it, that they must “start doing some midcourse correction in terms of messaging, but also methods of messaging.”

“This meeting was like a check in, more so just recalibrating like, ‘Okay, let me catch my breath. Good to see you all. Here’s where I am, what are you hearing from the outside? Because this is what I hear on the inside, and let me figure out how to fill in these gaps that you see in our community.’” Riley said.

Women in the meeting told Harris they are ready to be dispatched as “ambassadors” to share policy updates so everyday people know what she’s doing and what she’s planning for her because “it was hard to talk transparently about some of the things that she’s working on because they’re still in negotiation,” an attendee said.

“There are communities of stakeholders and validators that would like to lift the vice president and amplify what she is doing,” said Rachel Noerdlinger, a communications strategist who attended the meeting. “But folks want to know what will help and what will hurt her.”

Christopher Cadelago contributed to this report.