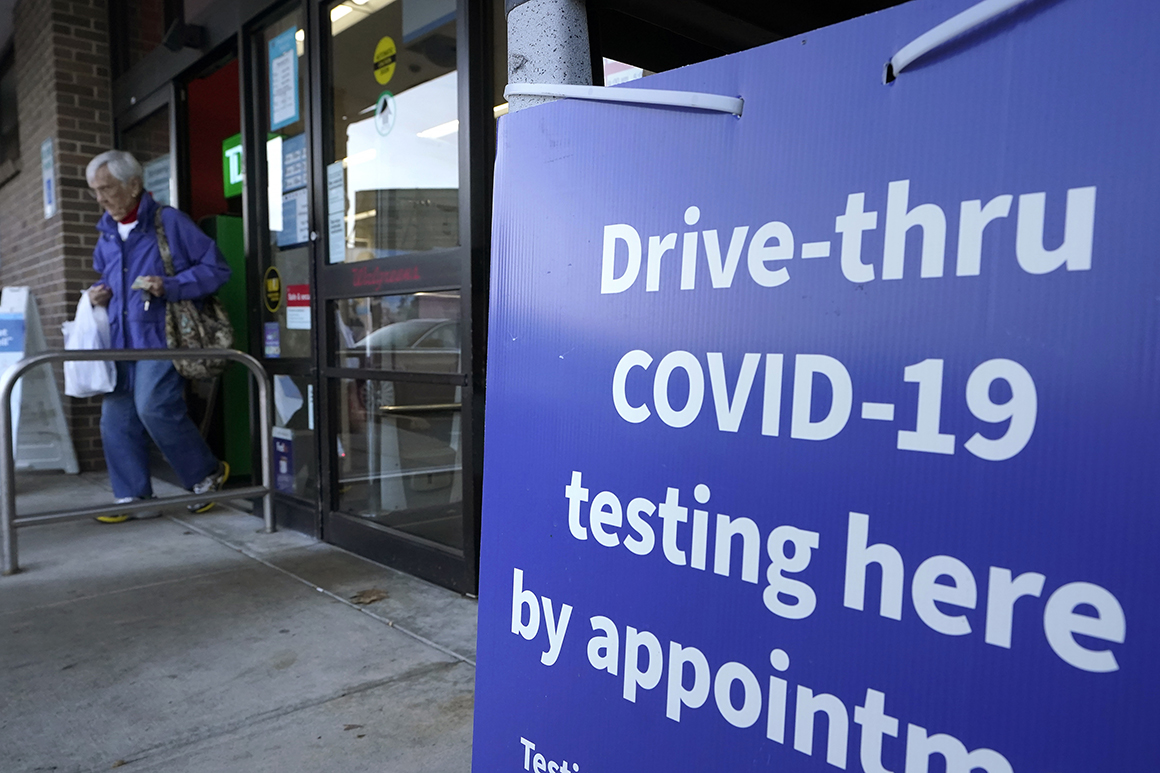 Biden administration health officials are privately warning Covid-19 test makers and laboratories that demand for tests could double or even triple over the next two months as cases surge across the country, five people with knowledge of the matter told POLITICO.

Internal modeling developed by the Health and Human Services Department’s Testing and Diagnostic Working Group projects that the nation’s supply could be stretched by the need to conduct 3 to 5 million tests per day by late January or early February — a sharp increase from current daily levels of more than 1.6 million.

The estimate hinges on assumptions that the Omicron variant is three to five times more transmissible than Delta, and that it will become the nation’s dominant Covid-19 strain within four weeks, one of the people said.

That possibility has fueled concern among Biden officials about whether the manufacturing of lab-based PCR, professional point-of-care and at-home tests will be able to keep pace with a sudden rush in demand. HHS officials have shared the modeling with the diagnostics industry in recent days, the people with knowledge of the matter said, but have yet to publicly signal plans for additional initiatives to boost supply.

The White House referred questions to the Department of Health and Human Services. An HHS official said the department is “modeling for a range of scenarios to prepare for potential future public health needs.”

“Testing demand involves many behavioral variables, but we are focused on preparedness and continuing to make sure plenty of tests are available along with vaccines, boosters, and other tools to help protect the American people,” the official told POLITICO.

Sources close to the diagnostics industry told POLITICO they are confident manufacturers will be able to keep pace with the increase in demand for testing.

But the Biden administration is concerned that supply of all types of Covid-19 diagnostics won’t keep pace during the Omicron wave, according to Mayo Clinic Laboratories President William Morice.

“The modeling at the federal level indicated that demand would exceed supply in all the different modalities,” said Morice, who also serves as president of the American Clinical Laboratory Association board of directors. “This is different than any conversations that we’ve had with this administration in terms of the urgency.”

The U.S. is currently recording more than 1.6 million daily Covid-19 tests, according to a tracker maintained by Johns Hopkins University. Many at-home antigen tests are not reported to public health authorities — meaning millions of results from the increasingly popular rapid tests are likely not included in that count.

Even so, officials are bracing for a resurgence of the virus this winter driven by an Omicron variant that initial data suggests is more contagious than its predecessors.

In a meeting Tuesday with public health officials that was first reported by The Washington Post, the administration detailed two scenarios for how Omicron might spread. One path showed rising infections in the spring, said two people in attendance. The second forecast a worse and more immediate surge driven by a combination of Omicron and Delta cases, as well as the flu.

Thirty-six states have reported Omicron cases, Centers for Disease Control and Prevention Director Rochelle Walensky said Wednesday. The administration estimates that the number of infections driven by the variant is doubling every two days.

Top health officials have downplayed the need for additional public health measures to contain the spread, emphasizing that the existing vaccines remain the best weapon against the virus.

Initial data show that those who received Covid-19 boosters are far better protected against Omicron than those with only their initial round of shots, and the White House has stepped up efforts to make boosters more widely available.

Still, CDC data show that more than 70 percent of adults have yet to receive a booster dose, meaning caseloads could increase well before most of the country is more fully protected.

Public health experts and even some lawmakers have warned for months that the U.S. needs a more robust testing system, especially with the virus likely to continue circulating well after the pandemic officially ends.

The administration has spent billions of dollars to bolster the testing supply chain. But it has so far declined to make the kinds of massive purchases of at-home tests that critics say could push down their price and make them more widely accessible.

The White House earlier this month instead outlined a plan requiring private insurers to reimburse people for the cost of their at-home tests, beginning at some point in January. It is also distributing 50 million tests for free to community centers and other pick-up points.

Sam Scarpino, managing director of pathogen surveillance at The Rockefeller Foundation’s Pandemic Prevention Institute, said that if there is an exponential growth in cases, “a super exponential increase in test demand” will follow due in part to worried-well individuals and those exposed to a confirmed infection.

“The thing that’s more important than the number of tests is how fast the results come back,” Scarpino said. “In some ways, it would be more important for us to be doing fewer tests and getting them back to people faster. We’re gonna have to be ready for prioritizing who gets access to those tests.”