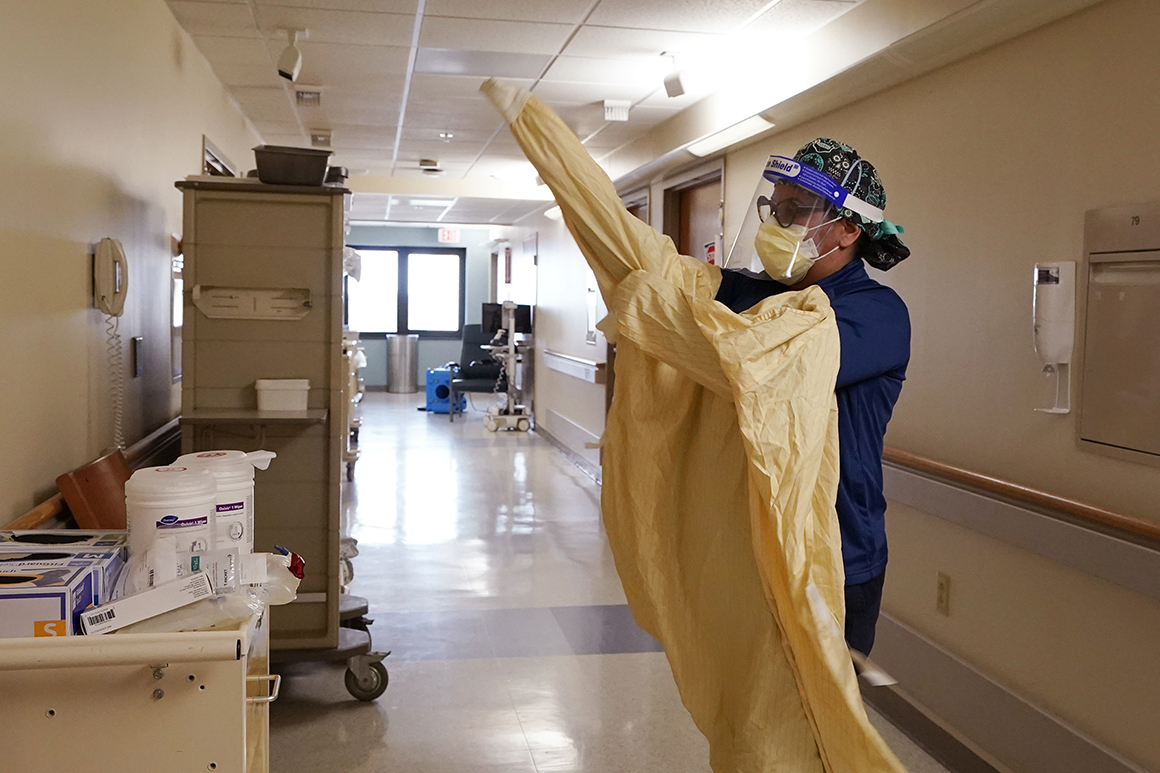 With Omicron cases surging and health care workers in short supply, hospitals and nursing homes are grappling with a patchwork of rules for vaccinating their staff against Covid-19 and in some cases begging off immunization requirements the Biden administration expected to start enforcing on Jan. 4.

Court challenges brought by mostly Republican states have frozen the administration’s vaccine mandates for health workers in 25 states, upsetting an already delicate balance between patient safety and pandemic readiness as health facilities brace for a wintertime surge of cases.

That’s left the Centers for Medicare and Medicaid Services in the position of deciding whether to follow through with the vaccine requirement, which President Joe Biden rolled out in September as part of a sweeping new federal plan to rein in the coronavirus. The trade group for nursing home operators is urging the administration to go slow because of the legal uncertainty while a major hospital trade group isn’t expecting a legal resolution for weeks to come.

The Mayo Clinic, which requires the vaccine with limited exceptions, will allow workers in Florida, where the governor has restricted mandates, to remain on staff for now, said Melanie Swift, an occupational medicine specialist at Mayo’s Rochester, Minn. headquarters.

“We won’t be terminating any employees in Florida until that is sorted out,” she said.

The standoff will likely drag on into the new year, possibly until the Supreme Court weighs in on the constitutionality of the mandate. The matter may be further complicated if the Centers for Disease Control and Prevention changes the definition of “fully vaccinated” and requires health workers to receive a third shot. One lobbyist said CMS lawyers have urged leadership not to follow through with the scheduled enforcement plans, including in those states where the mandate can take effect. Meanwhile, the Department of Justice asked justices last week to allow the mandate to go forward.

The tension is not limited to health care workers. Amtrak, for example, accommodated workers who didn’t want shots with a requirement they submit to regular Covid-19 testing. Boeing dropped a vaccine requirement for U.S. employees earlier this month after a court ruling that halted Biden’s mandate for federal contractors.

But the situation comes at an especially precarious moment for hospitals, nursing homes and other communal facilities. More than 60,000 patients are hospitalized with Covid-19, according to the CDC, and the numbers are climbing with the highly contagious Omicron strain surging across the country and now accounting for nearly three-quarters of new U.S. cases. And even before the strain surfaced, a large percentage of U.S. health workers were unvaccinated.

“Vaccination rates among health care workers generally mirror those in the communities in which they live,” AHA spokesperson Colin Milligan said.

With the country now recording around 150,000 new infections every day and Biden’s mandate stalled, the pressure is on CMS to find a workaround.

Administration officials have considered contingency plans in case their vaccine rule isn’t upheld by the courts, including a testing option, according to a person familiar with the matter. That would be similar to the requirement for employers with more than 100 workers, who must ensure employees are either vaccinated or submit to weekly testing — though that rule is also facing legal challenges.

Representatives of the American Hospital Association said last week that CMS hasn’t communicated a “Plan B” in case the mandate is blocked by the courts.

Nancy Foster, the AHA’s vice president of quality and patient safety policy, said she expected the court challenges to take weeks or months to resolve and that CMS will offer health care providers a grace period given unresolved questions about implementation.

For now, federal officials and hospital executives are in a holding pattern until the courts decide. CMS earlier this month said it wouldn’t enforce its mandate until the legal battle was resolved, but that was before a court decision cleared the rule in half of the states. A spokesperson for the agency said they are reviewing the court decisions and evaluating next steps.

Amid the uncertainty, some health providers are seeking guidance from CMS on whether the mandate applies in some states but not others and, if so, when it takes effect.

Some trade groups such as the Illinois Health and Hospital Association are advising members to follow the mandate.

But for many hospitals, requiring vaccination could create a staffing shortage and send workers who don’t want to be immunized seeking employment elsewhere.

“We have really seen many of our providers struggling with implementing their own rules of engagement for their business,” McDermott said. 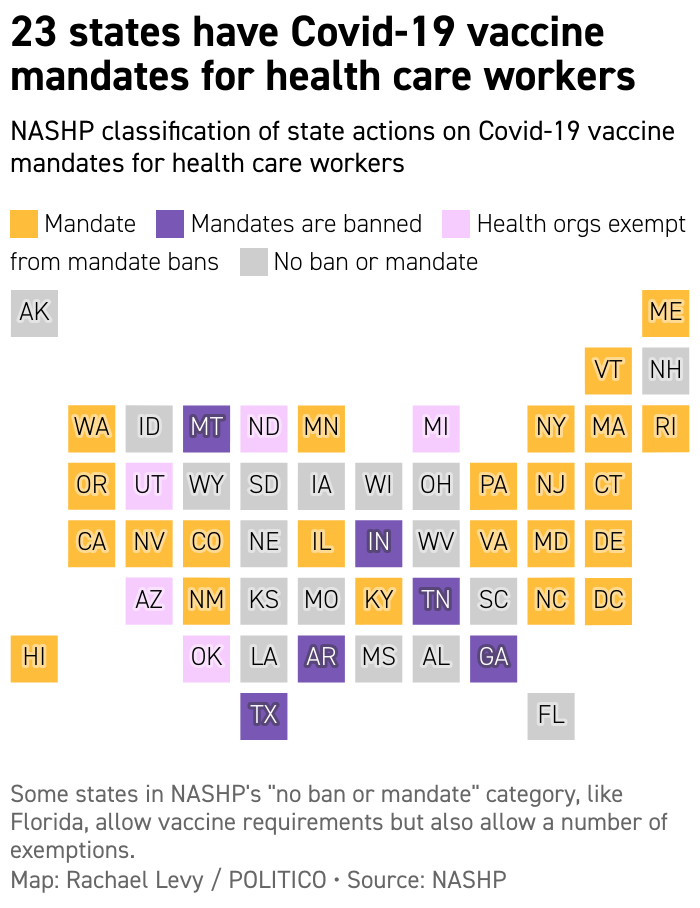 Meanwhile, some nursing homes are asking for leniency, due to fears of staff shortages. AHCA/NCAL, a trade group representing nursing homes and assisted living facilities, said it is concerned that the mandate “will exacerbate the long term care sector’s historic labor crisis.”

Should the courts ultimately strike down the Biden administration’s mandate, it would be difficult for the federal government to try to require compliance in another way, said Celine Gounder, an infectious disease specialist who advised the Biden transition’s Covid-19 response.

But, she said, “that doesn’t mean states and cities can’t be more aggressive.”

The Supreme Court last week upheld New York’s requirement that health care workers be vaccinated even if they cite religious objections, and recently refused to block a similar rule in Maine.

North Carolina required its state health care workers to be vaccinated earlier this year. Now, more than 99 percent are vaccinated, according to Mandy Cohen, the state’s secretary for the Department of Health and Human Services.

Hospital leaders are now ensuring workers get a booster shot, she added.

“We are trying to lead by example,” Cohen said.