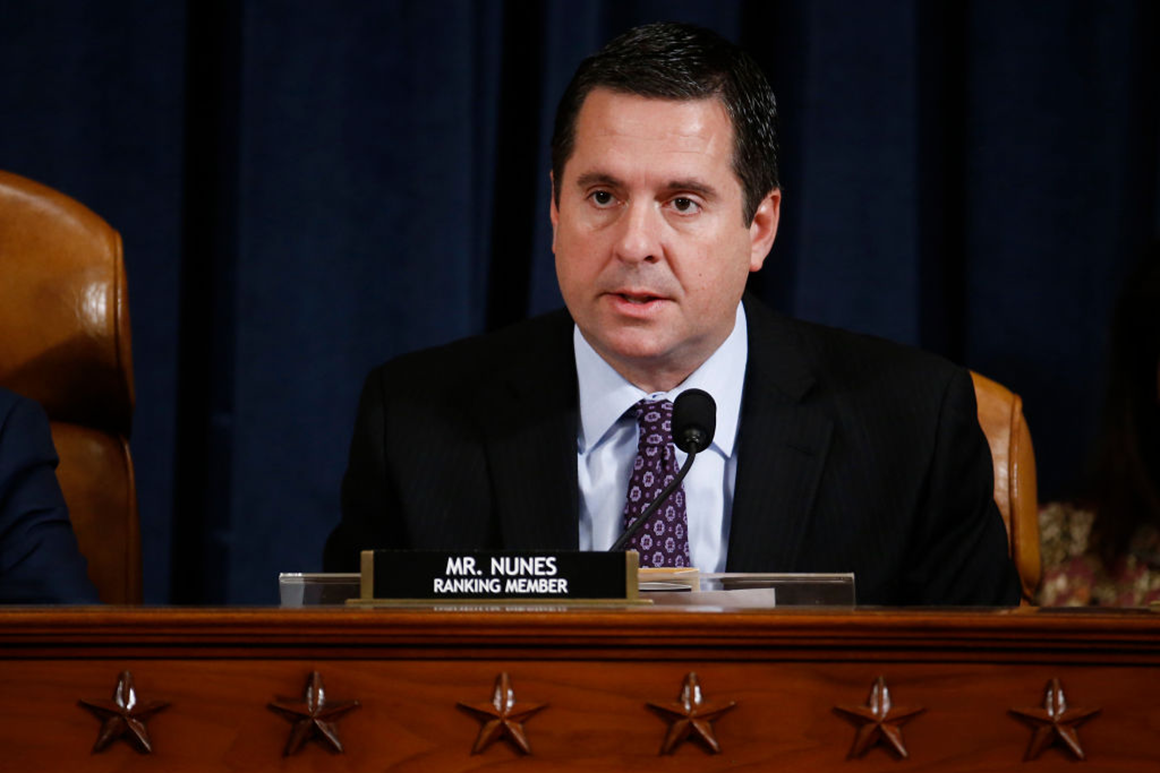 The California Republican’s surprising departure leaves the House Intelligence Committee without a top Republican, but it’s also launched new jockeying among Republicans for the top spot on the House Ways and Means Committee come 2023. Nunes, who’s leaving to become the CEO of former President Donald Trump’s forthcoming media company, was previously viewed as a frontrunner to succeed the current top Republican on the tax-writing Ways and Means panel, retiring Texas Rep. Kevin Brady.

The next two most senior members on Ways and Means, Reps. Vern Buchanan of Florida and Adrian Smith of Nebraska, have already started talking to members of the Steering Committee — a little-known but highly influential GOP panel that decides committee assignments and leaders — about their interest, according to multiple lawmakers.

“Vern Buchanan has been running hard for the chairmanship. Adrian Smith has been laying the groundwork for his ideas and leadership,” Brady said in an interview. “What I’m excited about is, we have a terrifically talented Ways and Means Republican team. So we are going to end up with a first-rate leader as chairman.”

The race won’t come to a head until after the midterms, and the winner will ultimately be decided by the Steering panel, which is stacked with leadership allies. For now, House Republicans aren’t ready to declare a leading candidate to take what may well be the Ways and Means chairmanship in the next Congress, given their bright midterm prospects.

Buchanan confirmed in an interview that he’s running for the party’s Ways and Means top spot, saying that “I’ll be the senior member, so I think I’ve got a good opportunity here.” Adding that he’s chaired multiple subcommittees on the panel, Buchanan observed: “There’s never been a Republican chairman on Ways and Means in Florida or in the South, ever. So that’s historical.”

Smith confirmed his own interest in a statement: “I am hopeful we will regain majority in the House in 2022 and am eager to serve as the next Ways and Means Chairman and empower members to work as a team to stop Biden’s economic agenda, bring certainty to our tax code, and reconnect Americans on the sidelines with good-paying jobs.”

But they aren’t alone.

“Anybody who says they’re not interested is lying,” said Rep. Mike Kelly (R-Pa.), a member of the highly sought-after committee who indicated he too is eyeing the Ways and Means role.

Naming Nunes’ replacement as the next top Republican on the Intelligence Committee is a different story and a more pressing decision, one that falls exclusively to Minority Leader Kevin McCarthy due to the panel’s select committee status. Reps. Mike Turner (R-Ohio), Chris Stewart (R-Utah) and Brad Wenstrup (R-Ohio) are all making their interest known.

Stewart, the third-most senior Republican on the committee after Turner and then Wenstrup, said he believes he is the “best qualified” for the role.

“Between my 14 years of military service and seven years on the committee, I strongly believe that I am best qualified for the position of ranking member,” said Stewart, a former Air Force pilot, in a statement. “I spent more time than anyone studying our enemies and the threats they pose. From China to the Ukraine, Africa to Afghanistan, I have seen firsthand the dangers we face.”

Wenstrup, an Army Reserve officer and Iraq War veteran, said it would be an honor to lead Republicans on the panel and help its “critical mission of keeping Americans safe in a dangerous world of emerging and evolving threats.”

And Turner simply told POLITICO he is “seeking the position.”

Turner had previously sought the top spot on the House Armed Services Committee but was passed over, most recently last year when the Steering panel picked Rep. Mike Rogers (R-Ala.) for the role.

Some GOP members wonder if this may be Turner’s moment for a top committee post. But whoever ascends to the position must be ready to take on the burden of a committee now known as a partisan battlefield, lawmakers say. Cross-aisle relations deteriorated during the Trump administration — when Nunes and now-Chair Adam Schiff (D-Calif.) clashed over investigating former President Donald Trump’s ties to Russia.

Privately, Republicans are betting McCarthy doesn’t make a decision on the Intelligence panel spot this week or perhaps until after Nunes leaves, given the legislative pileup Congress faces ahead of the holidays. Former Senate Majority Leader Bob Dole will also lie in state in the Rotunda on Thursday, adding to the packed Capitol schedule this week.

The final decision on the Ways and Means Committee’s top spot, of course, won’t come until after Brady finishes his final term next year. By then the lineup of the Steering panel may look somewhat different than its current makeup, although it’s unlikely to shift enough to give one contender a serious leg up.

The tax-writing committee has a history of Republicans leapfrogging to get the top spot, making the leadership race even more complex.

Brady first sought the Ways and Means chairmanship in 2014, when he was the most senior member vying for the open role. But then-Rep. Paul Ryan (R-Wis.), the third-most senior on the panel, ended up beating him out.

As one Republican member quipped, offering a forecast on condition of anonymity: “History, for the Ways and Means chair, is not the Rock of Gibraltar.”