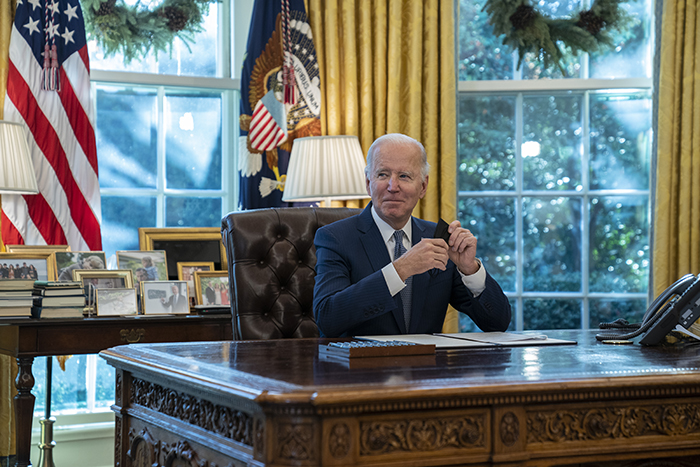 Interest groups trying to influence the president of the United States will often fork over millions of dollars in order to do so. During the Biden era, however, an old media-centric, less splashy technique has been deployed.

A handful of organizations with legislative interests before the government have taken to running print ads in Delaware’s The News Journal in an effort to get their message in front of the world’s most powerful individual, one who is likely the paper’s most famous reader. A review of the paper found that 17 ads have been run by these groups between September and mid-November alone.

The ads’ messages range from calling on President Joe Biden to take action on renewable fuel policy, to imploring him to draw down the country’s nuclear arsenal, to expressing gratitude that he preserved tribal cultural heritage sites in Utah. They often run alongside the paper’s more traditional ad content: print ads that urge local readers to buy a motorized scooter or hire a new local roofer.

The spots underscore how, when it comes to influence peddling, no stone is left unturned. They also reflect how Biden’s Delaware roots — and his commitment to going back to his home state regularly — have altered how those doing the influence peddling must think and operate.

Biden was known to read The News Journal during his tenure as vice president, and regularly fielded questions from the paper’s reporters on the 2020 campaign trail. That’s carried over, at least in part, to his time as president. POLITICO reported in May that the paper — which employs a few dozen reporters, has been in existence for more than 100 years and largely focuses on Delaware — was read in the White House and delivered to Biden’s Wilmington home.

Just a few weeks after POLITICO’s story was published, a group advocating for Puerto Rican statehood ran an advertisement in The News Journal reminding the president of his previous support for that position, and urging him to back legislation advocating statehood. September advertisements from a pro-refinery group pleaded directly with Biden to “fix the Renewable Fuel Standard” program, while another advocacy organization took out the same advertisement several days in a row in late October thanking the president for restoring protections to the Bear Ears National Monument in Utah, reversing a Trump administration policy rolling back protections for the land, which is considered sacred to several tribes.

At least two half-page ads from MIDI, Inc., a Delaware-based biotechnology company, urged Biden to change Food and Drug Administration leadership and not nominate Janet Woodcock, the acting commissioner of the FDA, for the permanent role (he did not).

The Union of Concerned Scientists, meanwhile, took out ads in The News Journal because it had heard that the president remains an occasional reader. In those ads, the group, which criticized the Biden administration for the tens of billions of dollars allocated in its budget for nuclear weapons, called on the president “to eliminate funding for new nuclear weapons” and minimize the role of nuclear weapons in security policy. The hope, said Stephen Young, the group’s senior Washington representative, was that the president would stumble upon it during a casual read. For good measure, the group also urged supporters to send letters to the paper’s editor.

“We are doing the classic full court press, trying everything we can think of, to try and get our message to the president,” Young said.

A representative for Gannett, the News Journal’s parent company, initially said the company does not share advertiser information or “track ad data in this manner.” But the paper did not respond to subsequent requests for comment about the ads or details including the paper’s circulation and advertising rates.

The targeting of Biden through strategically placed News Journal print ads is of a similar strategic vein — though entirely different scope — to the methods used to reach his predecessor, Donald Trump.

During the Trump administration, political interests repeatedly took to Fox News to lobby their case directly to the president, who often spent his days glued to the conservative cable news network. When former Illinois Gov. Rod Blagojevich’s wife, Patti Blagojevich, wanted a pardon for her husband, she successfully got the president’s attention by regularly appearing on multiple Fox News shows. Some of the first people Navy SEAL Eddie Gallagher thanked after he was acquitted of murder were Trump and Fox News. The network’s host Pete Hegseth had implored the then-president to pardon Gallagher if he was convicted.

Left-leaning political groups also took advantage of Trump’s habitual Fox News viewership, occasionally drawing his ire. In a statement last year, the then-president complained about advertisements running during commercial breaks that he perceived as negative. “What good is it if FOX News speaks well of me when they continually allow horrible and untruthful anti-Trump commercials to be run — and plenty of them,” Trump said. “In the good old days, that would never have happened and today it happens all of the time.”

Trump’s own 2020 presidential campaign at times realized the only way to get to him was advertising on Fox News. According to the Daily Beast, the campaign at one point spent over $400,000 in one month on television advertisements on Fox News, CNN and MSNBC to reach Trump and some of his surrogates and reassure him that his campaign was working to spread his message on television.

The attempts to reach Biden through The News Journal are decidedly less dramatic, though some seem designed to pull his heartstrings. The Fueling American Jobs Coalition — which represents independent refiners and union workers — ran ads highlighting a series of refinery workers, some from Wilmington, as part of its campaign to get Biden to fix the Renewable Fuel Standard program, designed to reduce greenhouse gas emissions. 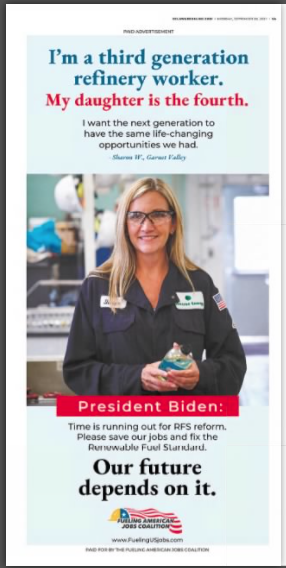 “Our ads in the News Journal about the Renewable Fuel Standard aimed to reach not only President Biden, but also the thousands of consumers and refinery workers in Delaware whose jobs are threatened by the broken RFS,” said a spokesperson for the group in a statement. “Our ads helped to ensure that these Delawareans and their families know that President Biden has the authority to fix the RFS and save thousands of union jobs in the First State, Pennsylvania, New Jersey and across the country.” 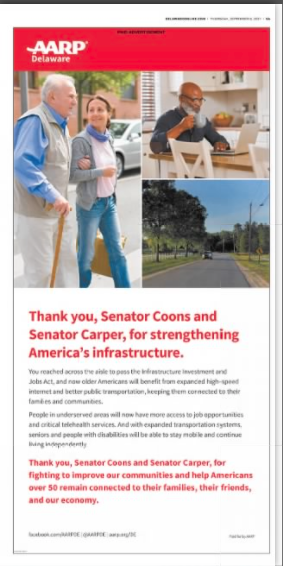 It’s not just progressive-minded groups hoping to reach and influence Washington through the pages of The News Journal. In October, Business Roundtable, a powerful coalition of CEOs, urged Congress to oppose tax hikes in an ad in The News Journal.

In September, the Biden administration published its plan to lower the cost of prescription drugs, endorsing a key provision in Democrats’ drug pricing bill, H.R. 3, that would allow the government to negotiate the cost of certain medicines. That same month, a front-group for the pharmaceutical industry’s lobbying arm ran a series of full-page ads in The News Journal attacking progressives’ plan.

We Work For Health, the group that paid for those advertisements, is a project of the Pharmaceutical Research and Manufacturers of America, or PhRMA, according to 720 Strategies, a public relations firm that has done work for the initiative on PhRMA’s behalf.