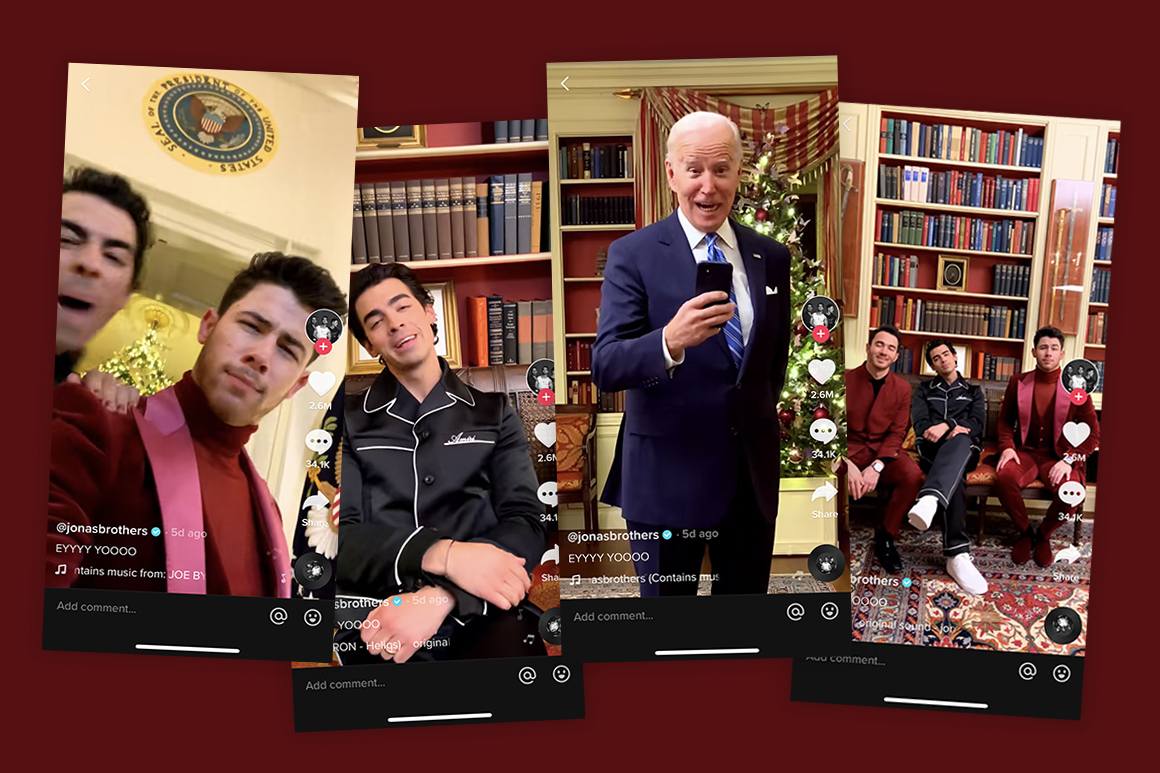 Sitting on a dark wooden desk, one leg underneath him with a blue mask matching his blue pants, Rob Flaherty, the White House’s director of digital strategy, was giddy about the reaction he was about to spark on Twitter.

“You know what’s going to be great is the f—ing, ‘Well who are the Jonas Brothers?’” he said, the last bit delivered in a nasally voice that conveyed the mocking from the political Twitterati that he was sure was to come.

Flaherty is quick with a joke and a curse word. He also knows his audiences. And the people who would loudly mock a video featuring the Jonas Brothers were ones who spent their days talking about, thinking about, digesting information about infrastructure, inflation and political infighting. They weren’t the ones he cared about, at least not this time. No. The reason Nick, Joe and Kevin were brought to the White House was to serve as the administration’s ambassadors to the great mass of the apolitical. And to do it, he would put his boss, the 79-year-old president of the United States, in a TikTok video featuring the boy band of brothers.

The result was a 17-second video set in different areas of the White House, shot a few days before the meeting, which subtly pushed Covid vaccinations. It did precisely what Flaherty imagined.

Political Twitter cringed at Joe Jonas, front and center, mouthing “Bing Bong!” and President Joe Biden popping up at the end, phone in hand, having seemingly recorded it all, declaring: “We got it!” Online, there was some shock that the video even came to pass. Some of it was dismissive. A fraction of folks on TikTok called for action on other agenda items, such as student debt relief. A Rolling Stone podcast argued it had “backfired” with the youths.

But in the first 24 hours, the clip had 50 million views, 10 million likes and 500,000 shares overall. The “sound” (an audio clip usually created by someone else and used in new ways by other TikTokers) had been used for other videos around 3,000 times, with some of the new creators showing off their Covid-19 tests or vaccination status. In a universe where nothing gets pure approval, that type of audience reach matters. And if it takes a video that has Nick Jonas asking his brother “Are you vaccinated?” and Kevin Jonas popping up behind a huge “Thank You” card yelling “Yes Sir!” then so be it.

“This was the first time we (as the White House and POTUS) took part in a viral social trend and then crafted the original audio to stay on message with vaccinations and boosters,” a White House official said in an email.

For a White House desperate to find ways to reach new audiences, particularly audiences skeptical about the Covid vaccine, the roughly 25-person digital team that helps create these videos is critical. Joe Biden, a near octogenarian, doesn’t exactly translate across platforms. Their job is to help make the transition smooth and avoid any faceplants. And a TikTok campaign makes a whole lot of sense for a White House looking to “meet people where they are,” a phrase uttered multiple times by the digital team. The app boasts more than one billion users and surpassed Google, as the most visited site of 2021. 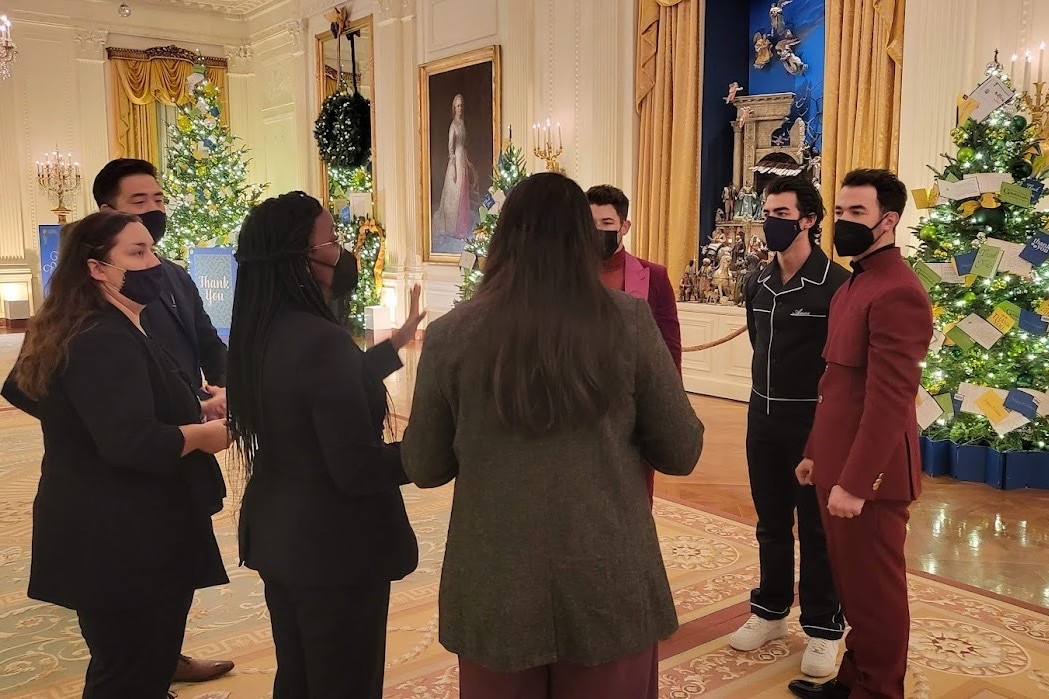 The Jonas Brothers project encapsulates their approach. It disguised the medicine under a spoonful of sugar. The team glommed on to a TikTok fad that young people were already sharing widely in order to influence a portion of them to get vaccinated.

“It is the balance between all the work that we do and the reach of what we get on a super on message versus something that is just purely for fun,” said Christian Tom, the White House’s deputy director of digital strategy. “In this example, we’re taking the moments from this like, yup, totally mega-trend that has hundreds of millions of views. We grab the part of it that is on-message for us.”

The group — which includes Tegan O’Neill, the director of platforms and Landon Morgado, the director of partnerships — calls themselves the “Planterships Team.” It’s like the celebrity marriage name of the platforms and partnerships teams of the digital squad. They work in an office, like most in the Eisenhower Executive Office Building, that is stately and boring. The carpets are tan or yellow, depending on how the light is hitting. The walls are tan and bare. There is a dark round table with dark wooden chairs with, yep, yellow and tan cushions.

Their brainstorming sessions usually start organically and the path from idea to video usually takes about 7-10 days, depending on travel and celebrity schedules, the team says. They have a running list of celebrities and influencers they’d like to feature, with an emphasis on those at their professional peak with lots and lots of audience reach. When asked if there have been any duds or what bad ideas they’ve had, the team laughs but declines to spill the beans.

“A lot of these people we speak to often, you develop relationships with them and you get to know what they’re passionate about,” said Morgado, the director of partnership. “And so sometimes it just fits because at the moment, we want to talk about x and that’s something Benny Drama wants to talk about right?”

Benny Drama, a social media star, shot a video (co-starring press secretary Jen Psaki) this summer using a character he’s played before, “Kooper the Gen-Z intern” running around the White House being wholly unhelpful. His over-the-top approach and emphatic nails elicited mockery from conservatives, who questioned what audience the White House was actually trying to reach. But, again, it was the message combined with the reach that mattered to the administration. In his video, Drama bellowed: “We need to get shots in the arms of every single American!” His post pointed his followers — which now number 1.4 million — to vaccines.gov.

The most notable celebrity collaboration, however, was with teen queen pop star Olivia Rodrigo, who came to the White House, spoke at the press briefing and spent time with Biden, Vice President Kamala Harris and shot a sit down interview with Anthony Fauci, the president’s chief medical adviser. The video the White House released followed Rodrigo around the White House for the day.

“It’s about setting the principals up to not feel like, you know, grandparents in the nightclub and feel sort of native,” is how Flaherty puts it.

Past administrations had it a bit easier. For starters, social media was still nascent, making the need to use it less paramount. But the prior two presidents were also more familiar with that world. Barack Obama was the first presidential candidate to effectively utilize Facebook; toward the end of his second term, both he and Cabinet officials were regularly utilizing various platforms and online shows to go viral. Donald Trump made his political name on Twitter. As president, attracting social media attention was the least of his problems.

Biden doesn’t tweet. And he didn’t walk into the White House with the swag of a youthful politician. He was elected largely because folks thought he’d be a steady, boring hand at the wheel. But a formula for winning over voters that worked during the 2020 election has been tricky to duplicate while in office. In particular, the president has had trouble reaching young people. Earlier this month, a Harvard Youth Poll found 51 percent of voters 18 to 29 disapproved of the president, with 46 approving of the job he’s done. That was down 13 points from the same poll in March.

“There’s a tension that we found between being presidential and trying to be as effective as you can online, which aren’t always the same thing,” said Nathaniel Lubin, the director of the office of digital strategy for the Obama administration in his second term. “The kind of memes and things that are going to get more attention may come at the expense of what some people would perceive, anyway, as presidential.”

For most of the pandemic, health experts and the administration have found that the best people to convince others to get vaccinated are either people they know or, more importantly, their doctors. Seeing Benny Drama run around the White House is not going to suddenly convince millions of vaccine skeptics to rush to the nearby CVS. But the administration still sees the videos as part of a messaging campaign that can reinforce the importance of vaccination, demystify it, and, in a small way, move the country one step closer to some type of normalcy. 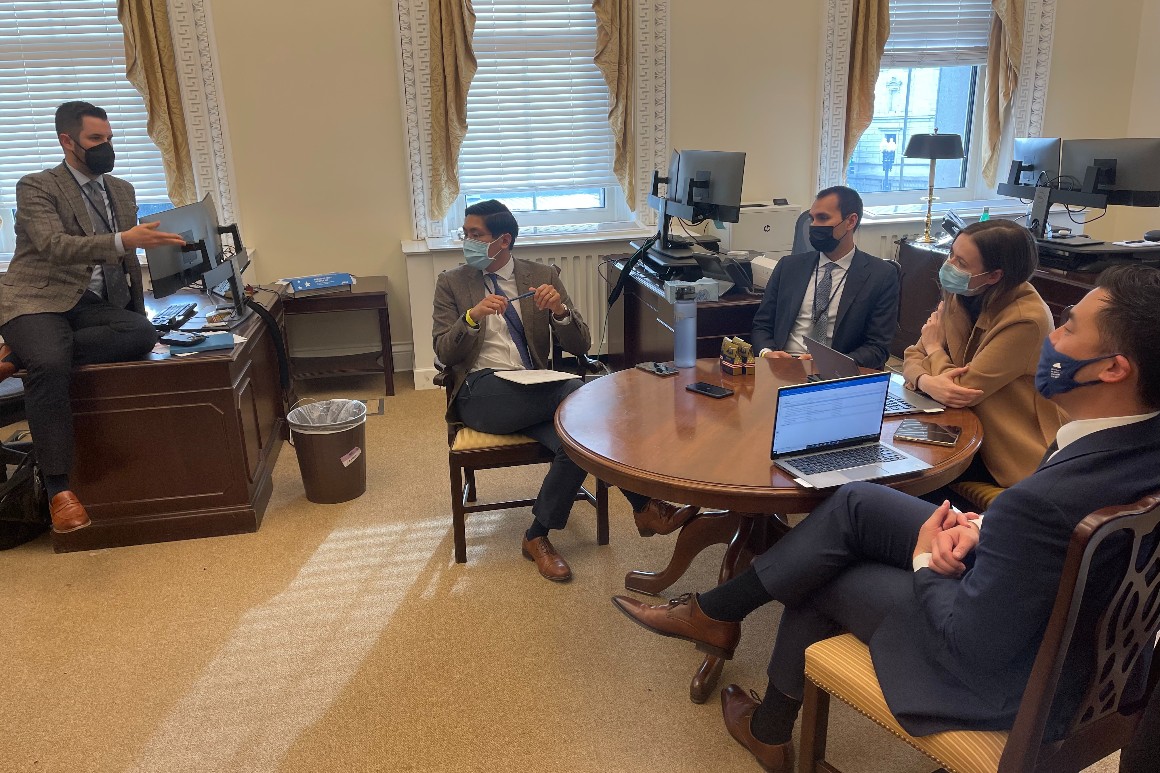 Flaherty points to the “loud anti-vax propaganda machine” online as something the famous folks help to fight against.

“When you have creators and celebrities and all these people going out there and doing that, not only does it reach a lot of people, but it encourages other creators to go start doing it themselves and start being more proactive in their messaging, too. And they will start lifting up doctors and things like that. So it’s sort of a whole system,” he said.

The truth of the matter is that Flaherty and his team can’t always prove a quantitative impact. The administration can look at the likes, shares and views. But whether or not the JoBros or Rodrigo actually convinced any specific number of people to get vaccinated is damn near impossible to figure out. It’s even hard to measure whether people are watching and loving the content or dragging it.

But not trying would be an even greater misstep than eliciting some mockery from certain online corners. As Flaherty sees it, the vaccination campaign is mostly about awareness. “You don’t always want to measure an awareness campaign by a conversion campaign’s metrics,” he adds.

“It’s hard to attribute. We look at qualitative data in terms of people commenting and say, ‘We’re going to get vaccinated.’ Is there an uptick in traffic to vaccines.gov? And sometimes there is one and you don’t know why that is,” Flaherty adds. “You can’t say that came from this, but it’s important that we do everything and sometimes that’s not going to live outside of what’s measurable.”

The one thing that is measurable? The digital team is going to keep on calling up the most famous among us to lend a hand on all types of topics. As for the Moby Dick of celebrity influencers?

Obviously. No bookings have yet been made but digital staff “has spoken” with Queen Bey’s team.