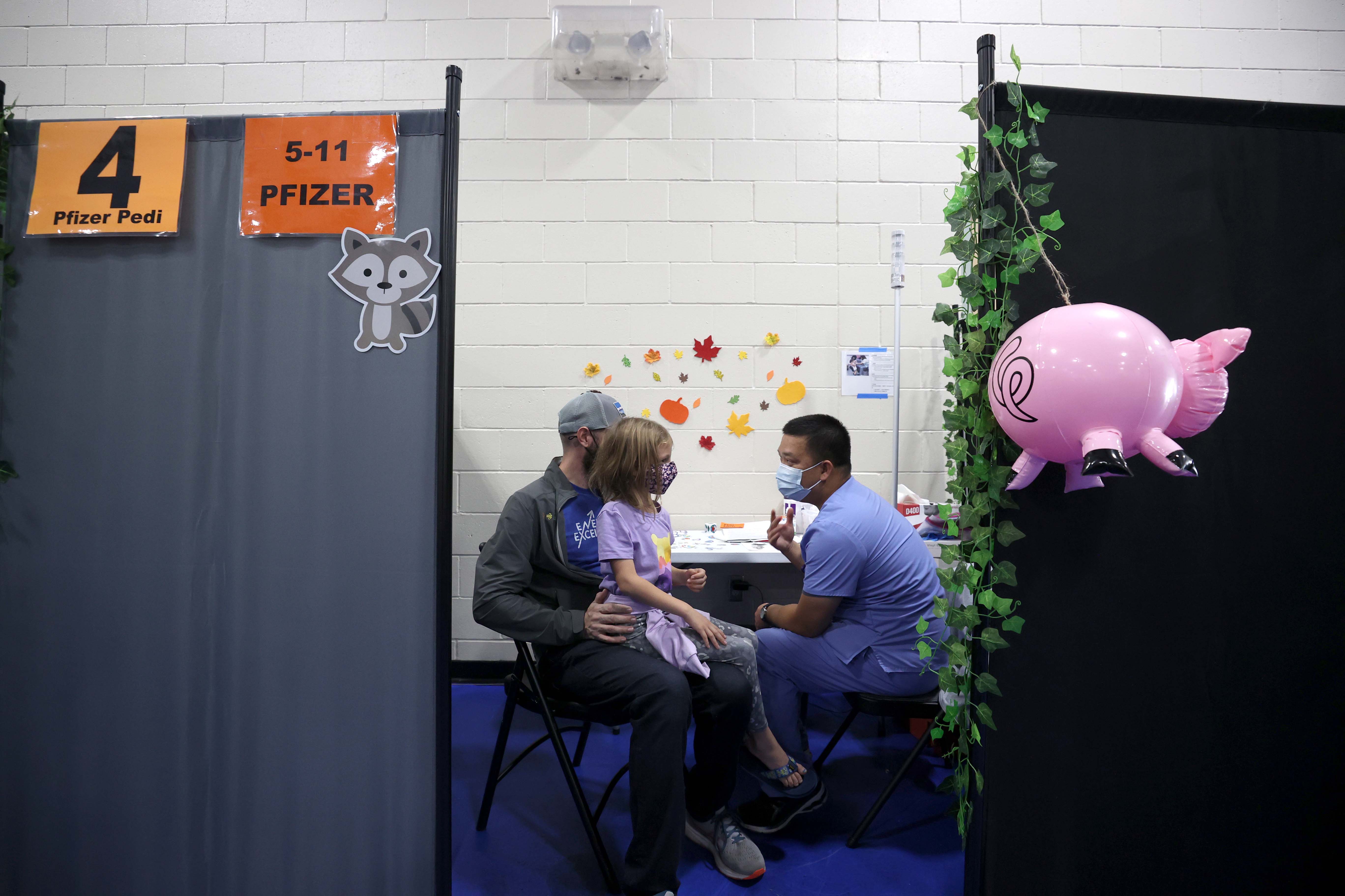 Los Angeles Unified was supposed to show other school districts how to roll out an expansive Covid-19 vaccine mandate for students, but its about-face this month may instead have a chilling effect around the country.

In September, the nation’s second-largest school district imposed strict vaccine requirements on children 12 and older, with almost no exemptions. The district blinked at the last minute, however, as community activists and Gov. Gavin Newsom questioned the idea of moving more than 30,000 unvaccinated students back into distance learning.

Other U.S. districts in blue states are scaling back previous student mandate ideas, too. School leaders in Portland, Ore., tabled discussion this fall amid vigorous pushback, while New York and Chicago have taken a wait-and-see approach. Not only are they wary of mandate critics, but they also question whether they should impose a requirement before the Food and Drug Administration fully approves vaccines for their students — a threshold Los Angeles Unified didn’t wait for.

“Better to get it right than be first!” Portland Public Schools Board Member Julia Brim-Edwards tweeted as she and other leaders delayed a vote in Oregon’s largest district.

The discussion has been virtually exclusive to Democratic-led states, considering that districts in red states struggle to require masks, let alone Covid shots. Only California so far has announced a statewide vaccine mandate, though implementation is likely months away because of contingencies.

As the Omicron variant surged in Washington, D.C., this month, leaders there approved a March 1 student vaccine requirement — but only for age groups eligible for FDA fully approved vaccines and with enforcement delayed until the fall, a more lenient path than initially proposed. Districts elsewhere have required Covid vaccines for students participating in after-school activities but stopped short of requiring shots to attend class.

The Biden administration has been pushing to keep all students in school — vaccinated or not — despite the threat posed by the highly contagious Omicron variant of the virus. Last week, the Centers for Disease Control and Prevention endorsed the “test to stay” strategy used by some districts to limit the time students must quarantine after being exposed to someone infected with the virus. CDC Director Rochelle Walensky called it “an encouraging public health practice to keep our children in school.”

Federal regulators could play a major role in triggering district vaccine mandates. The FDA has only formally approved the Pfizer-BioNTech vaccine only for individuals at least 16 years old, though Pfizer recently requested that approval for ages 12-15. Should the FDA sign off — and later for younger ages — districts may have more confidence legally and politically to move forward.

Los Angeles school officials defended their eleventh-hour delay as necessary given the absence of a plan for how to reassign teachers, consolidate classes and shift tens of thousands of students to remote instruction at once.

One problem Los Angeles Unified faced as it weighed whether to impose its vaccine requirement for students is the disproportionate impact the move would have had on Black and Latino children. Only 60 percent of Black Los Angeles County residents 12 and up have gotten at least one dose. The vaccination rate among the county’s Latino residents 12 and up is 68 percent. The mandate requirement would have disproportionately moved students of color off campus.

Los Angeles district leaders asserted their strict mandate led to more students getting vaccinated than would have otherwise. President Kelly Gonez said the district believes in vaccines and the move is “not about conceding to a vocal minority of anti-vaxxers.” And incoming Superintendent Alberto Carvalho insisted the change is “an evolution” in the board’s thinking, not “a reversal.”

Still, health experts say it was a missed opportunity.

“Not mandating the vaccine now is a clear disincentive for other districts to force the issue,” said Yvonne Maldonado, chair of the Committee on Infectious Disease for the American Academy of Pediatrics and a professor of epidemiology at Stanford University. “Waiting until fall to implement the mandate means the virus is going to wreak havoc on another school year for a lot of kids. It’s the wrong call.”

California Democratic State Sen. Richard Pan, who has authored legislation to tighten California’s childhood vaccination rules, said the racial disparity in children’s Covid-19 vaccination rates means the government must do even more to make shots widely available to those families while also combating misinformation about the vaccine.

He doesn’t think Los Angeles’ decision to delay enforcement of its mandate for students will deter other districts from trying to implement mandates of their own.

“The thing on everyone’s mind is, how do we keep schools open?” Pan said in an interview. “Without mandates for students, there will be even more closures due to outbreaks. With mandates, the number of children who can’t attend because they’re unvaccinated will be relatively small.”

Districts elsewhere have weighed which students are most likely to be unvaccinated if a mandate is enforced, and the drawbacks of having those students learn under remote instruction.

Outgoing New York City Mayor Bill de Blasio just imposed tough new rules requiring children as young as 5 to get vaccinated to eat indoors at restaurants or participate on school sports teams, but he has been unwilling to consider requiring the vaccine to attend school. Doing so could block large numbers of children from their classrooms, he said — the same problem Los Angeles confronted.

Mayor-elect Eric Adams, who takes office Jan. 1, said in May he opposed a vaccine mandate for New York City students. More recently, Adams said he would consider a mandate for students 12 and up when the FDA fully approves the shot.

Chicago’s interest also hinges on full FDA approval, said Allison Arwady, the city’s public health commissioner. She went one step further and said the city wouldn’t consider a vaccine mandate for any students until the federal government fully authorizes doses for young kids, something that might not happen until next summer or fall.

In Portland, Ore., where unmasked protesters disrupted a November meeting held to discuss the possibility of a vaccine mandate for students, school board members punted the thorny issue and delayed a vote by six months.

Several other districts across the country, including ones in Seattle and Cincinnati, have debated Covid-19 vaccine mandates for students, while more than a dozen have imposed requirements that apply only to student-athletes. Pennsylvania and Texas took the opposite approach and passed legislation prohibiting mandates that apply to students.

Los Angeles Unified’s change in direction could empower those who are against Covid-19 vaccines.

“Changing course teaches those who don’t want to get vaccinated to hold strong, because if they do so in large enough numbers, the system will accommodate them,” warned Brian Castrucci, president and CEO of the de Beaumont Foundation, a public health advocacy group.

Alexander Nieves contributed to this report from Los Angeles.